The Horror and Beauty of Hiroshima 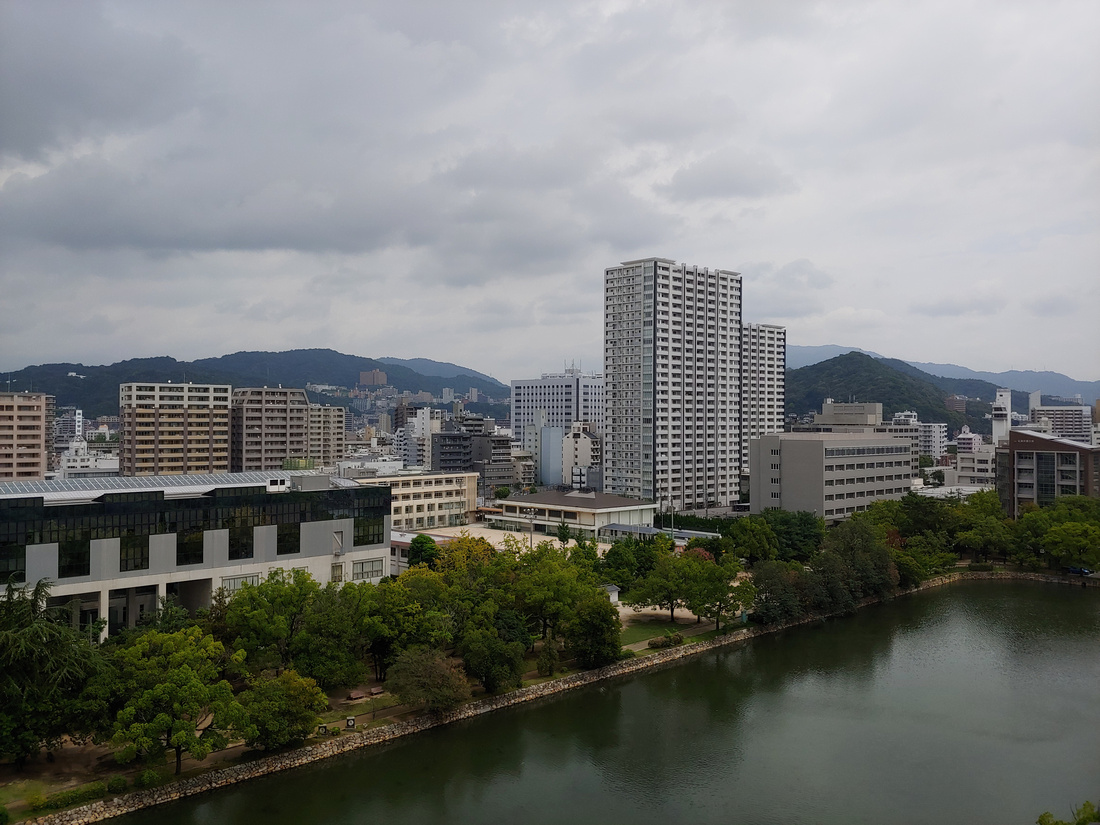 View of Hiroshima over the river

We took the train to Hiroshima and stayed at a hotel along the river.  This was the first town where we noticed a sharp decrease in English – both spoken and written.  We make do with pointing and gesturing and the Japanese continue to speak to us in Japanese as if we can understand them, but they also do some pointing and gesturing of their own to get their point across.  Somehow this all works.  The only tricky thing is the food.  Without anything written in English, our best hope is a menu with a few pictures.  We may not know exactly what we’re ordering, but at least we’ll have an idea.  The Google Translate app sometimes helps with Japanese characters, but more often it just confuses, especially if the text is written vertically as it often is.  After all, I really don’t know what a “chicken wrinkle” might be (although after ordering it, I’ve found that the most literal interpretation is often the best). 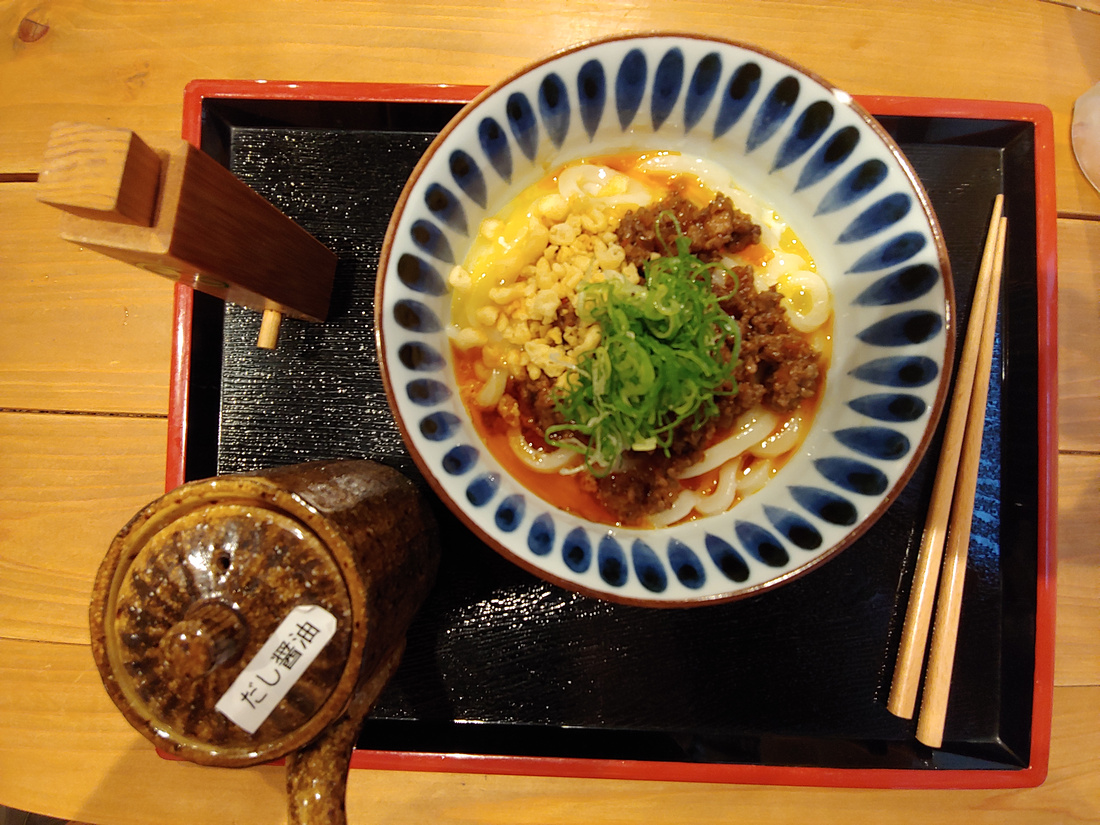 We visited the Peace Memorial Garden and Museum which honors and memorializes the victims of the atom bomb.  It was both very moving and very disturbing.  Hiroshima was selected as the primary target because of the damage the bomb would inflict because the city is very flat (but surrounded by mountains) and it had not been heavily targeted in earlier bombing missions.  The scope of the devastation caused by that bomb was horrifying.  I admit, I hadn’t even heard of a 5th degree burn before this visit.  The personal stories about that day and the ensuing days, months and years are excruciating to read.  There are a few pictures of what Hiroshima looked like before the bomb and many of what it looked like after.  There was almost nothing left – between the bomb blast and the ensuing firestorm, there were only a few buildings that weren’t flattened.

One such building has now become known as the Atomic Dome.  The bomb exploded almost right above this building and so it was somewhat protected from the blast.  The Japanese ultimately decided to keep this building in its ruined state as a reminder. 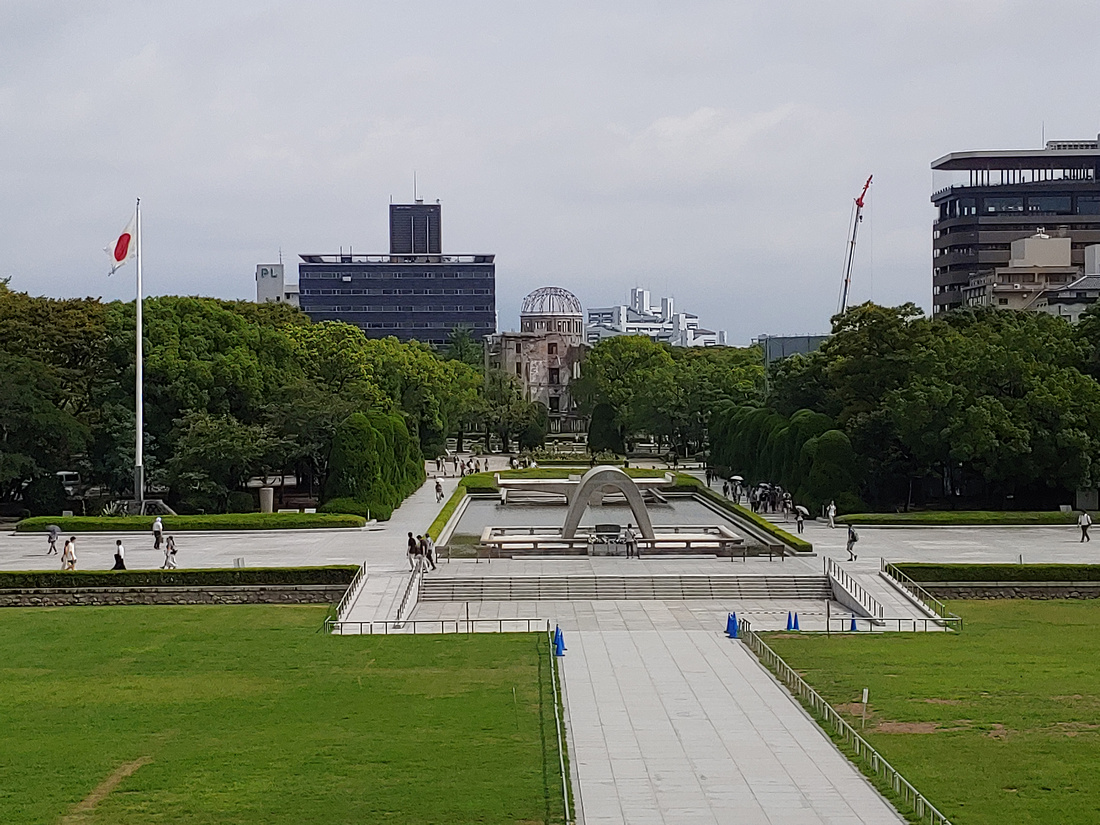 View from the Peace Memorial Museum

While in Hiroshima, we ate at a noodle shop with delicious Udon noodle bowls.  We talked a little bit to the owner of the shop who asked us where we were from.  I really wasn’t sure what to expect when we told him we were from the US, but he was very friendly and welcoming to us.  He said that he sometimes does guided tours of the memorial and he showed us a notebook of pictures and text that he had put together.  In it, he expresses his wish for lasting peace, elimination of all nuclear weapons in the world, and also for the Japanese to remember both the bombing as well as the role that Japan played in the lead up to WWII.  He fears that history will repeat itself if we all do not remember and appreciate the lessons of the past.  I was glad that he shared this with us – he was very earnest in his desire to spread his message of peace. 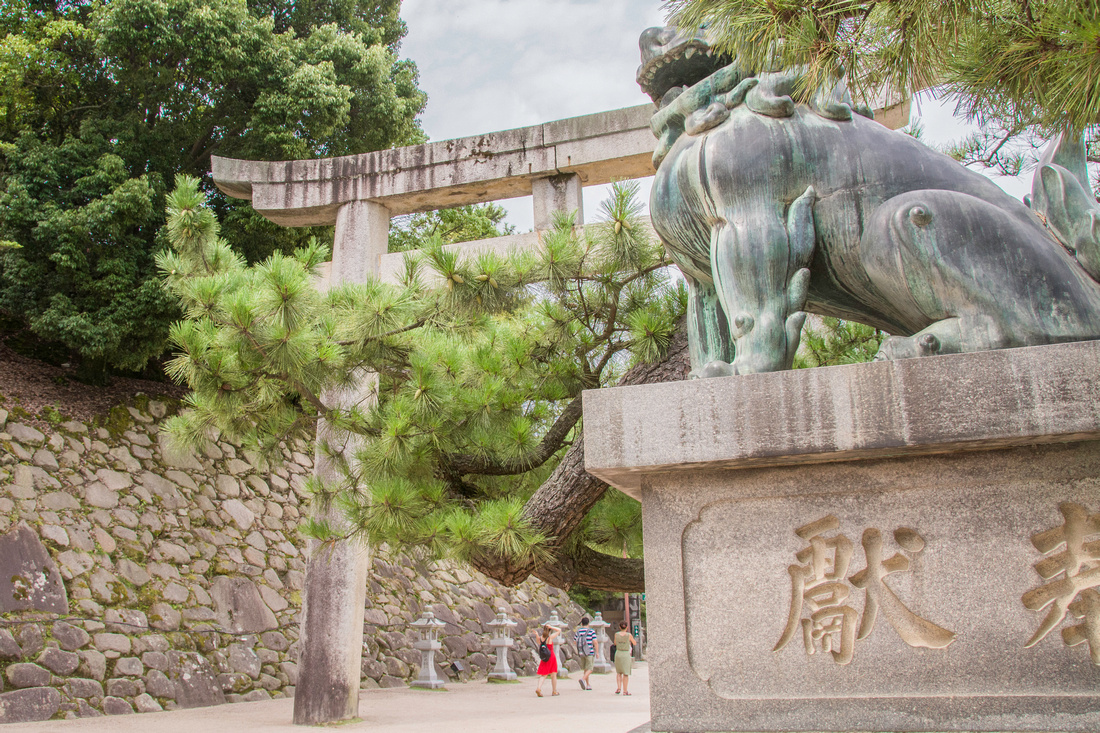 Entrance to the shrine on Miyajima

While in Hiroshima, we also took a train and ferry to Miyajima Island.  It is most well-known for it’s great orange Torii Gate which is partially submerged at high tide.  As often seems to be the case when we go to see some landmark in almost any country, it was under renovation and covered with scaffolding. 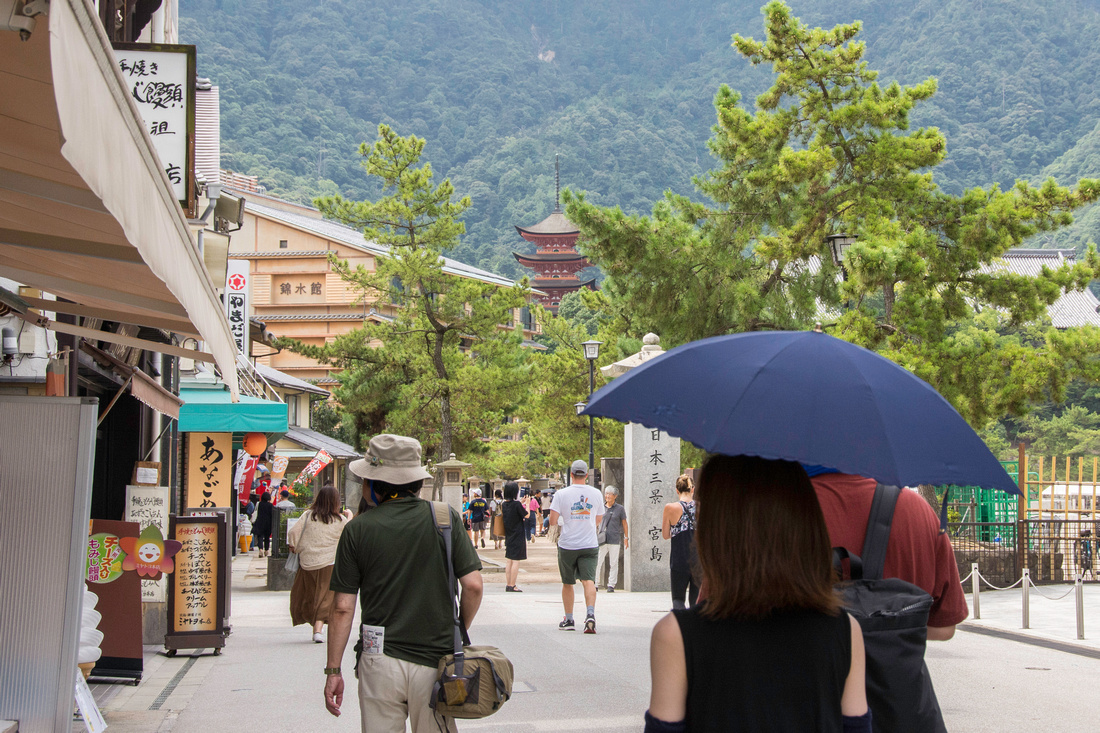 Strolling down the main visitor area of Miyajima 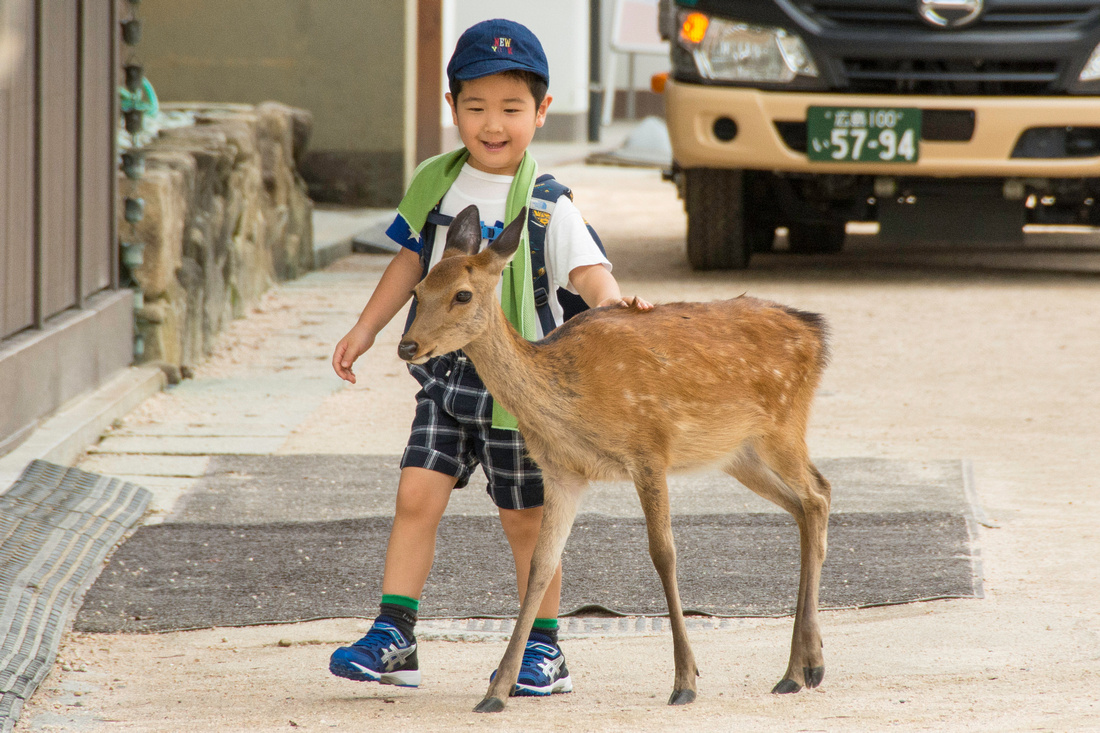 Little boy and a deer 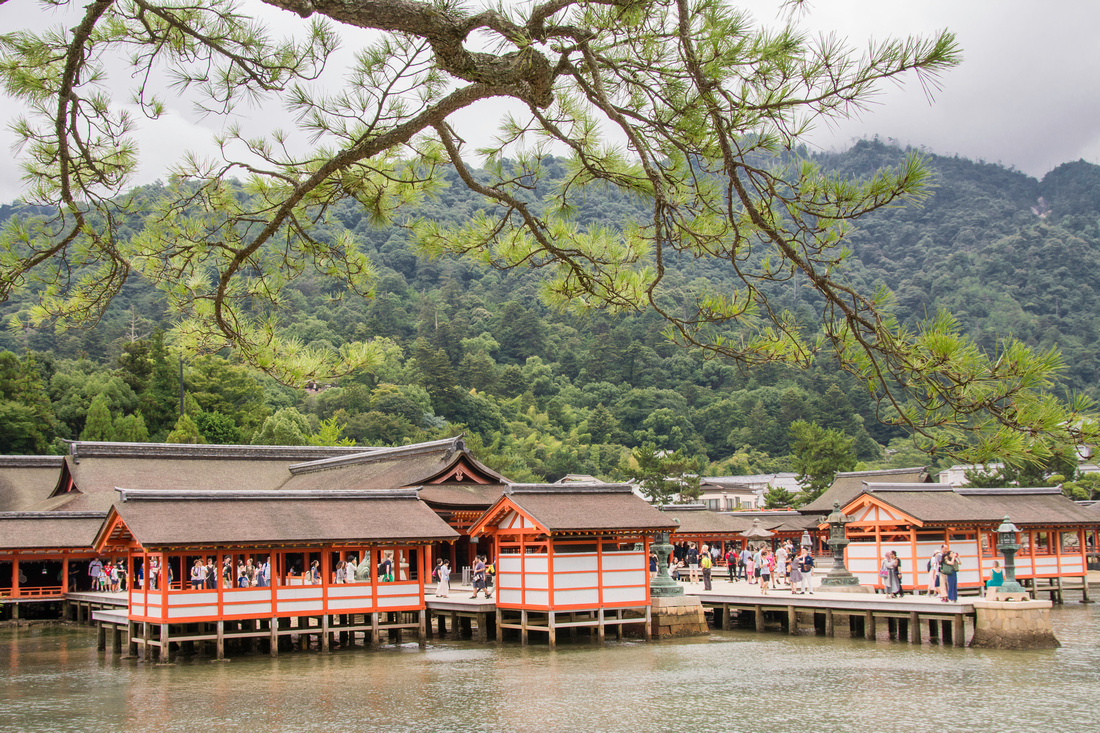 The Itsukushima shrine on Miyajima

There is also a shrine which is surrounded by water at high tide.  Lots and lots of people wandered around the shrine, so we headed into the hills where there were several temples and hundreds of Buddha statues of all sizes.  This was a magical place up among the trees and mysteriously devoid of visitors who I guess all stayed down in the main visitor area.  If I were to come back, I would stay at least a night on Miyajima.  There are hundreds of old stone lanterns that line the shore and I imagine that the island would be even better in the evening with the lanterns illuminating the walkway after all of the day trippers have headed home.

I wasn’t sure of what to expect of Miyajima, but I was very pleasantly surprised.  It ended up being one of my favorite places that we’ve visited in Japan.  Below are some more pictures of Miyajima - it was hard to narrow it down to just a few.  Enjoy! 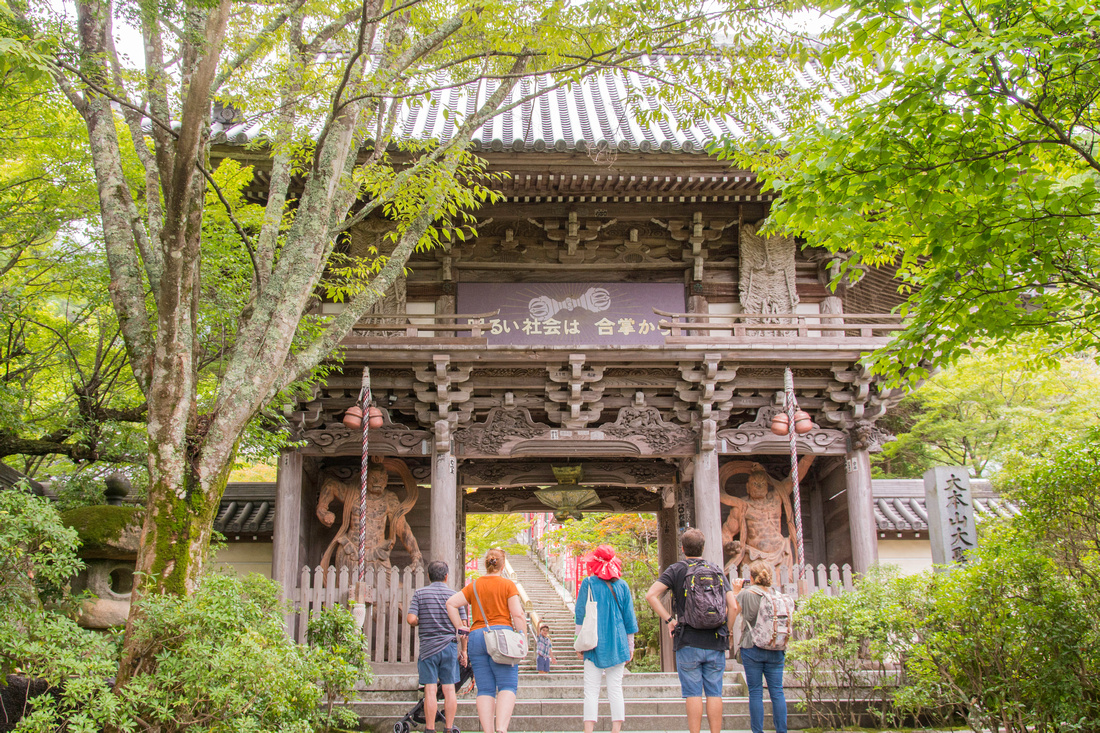 Temple up in the hills on Miyajima 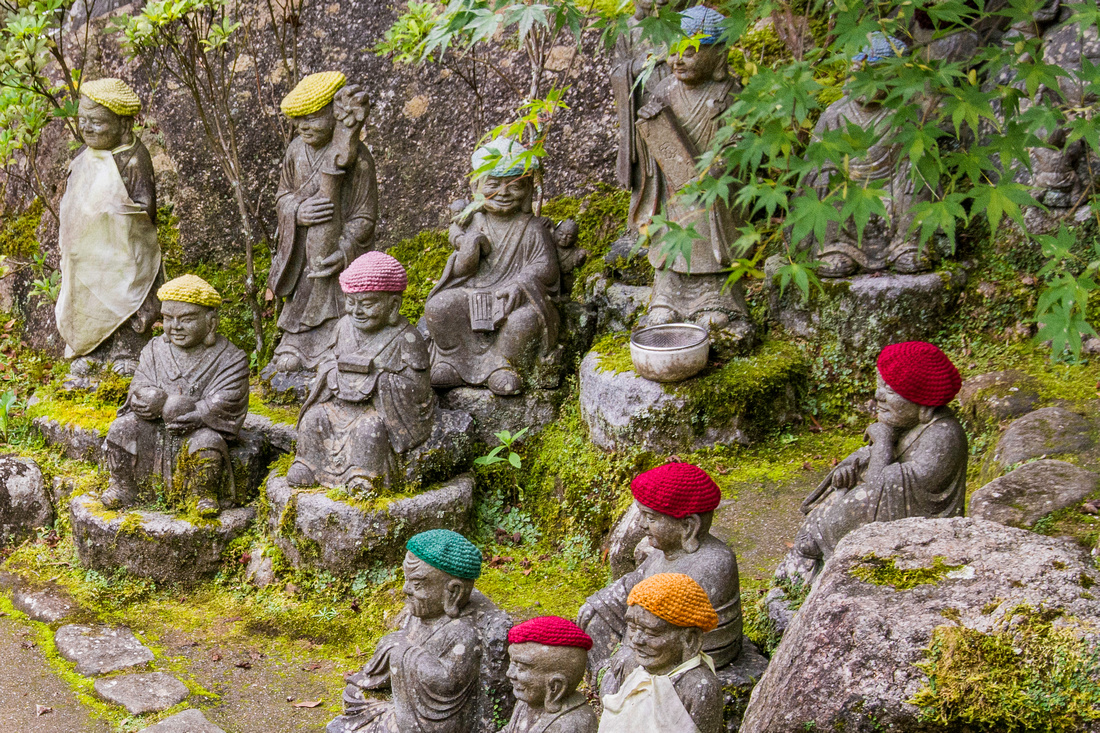 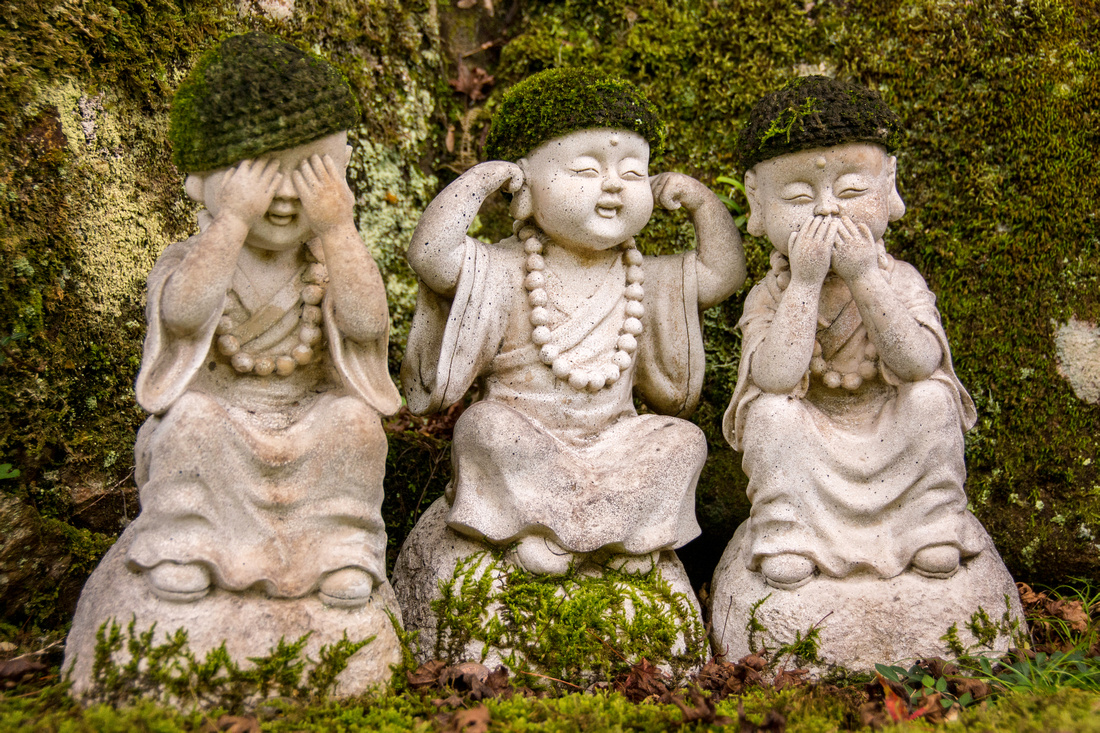 One more Buddha with a hat

Rows and rows of tiny Buddhas 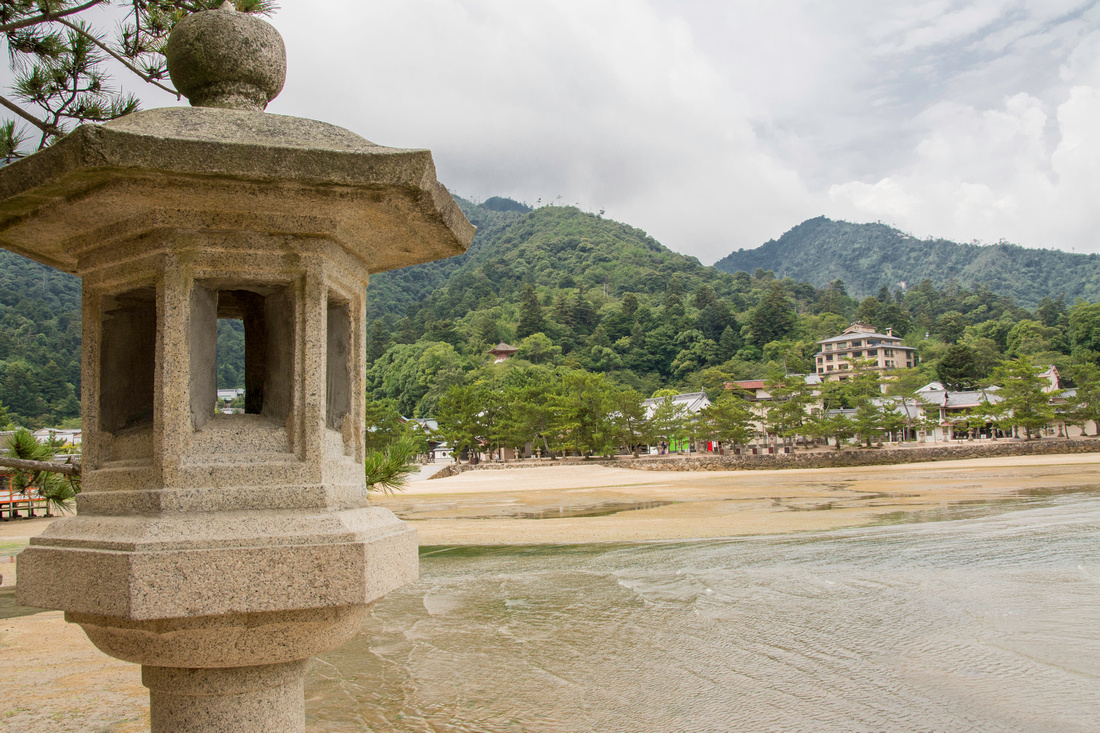