The Chaos of Hanoi

Ah Vietnam...  What a contrast to Japan.  The Japanese are a quiet, reserved bunch.  Even the cities are quiet - traffic moves in an organized fashion with no need for honking and certainly nothing so undignified as shouting.  Even the trains run quietly.  Arriving in Hanoi, we took a taxi to our hotel which is located in the Old Quarter - the busy urban core of the city. 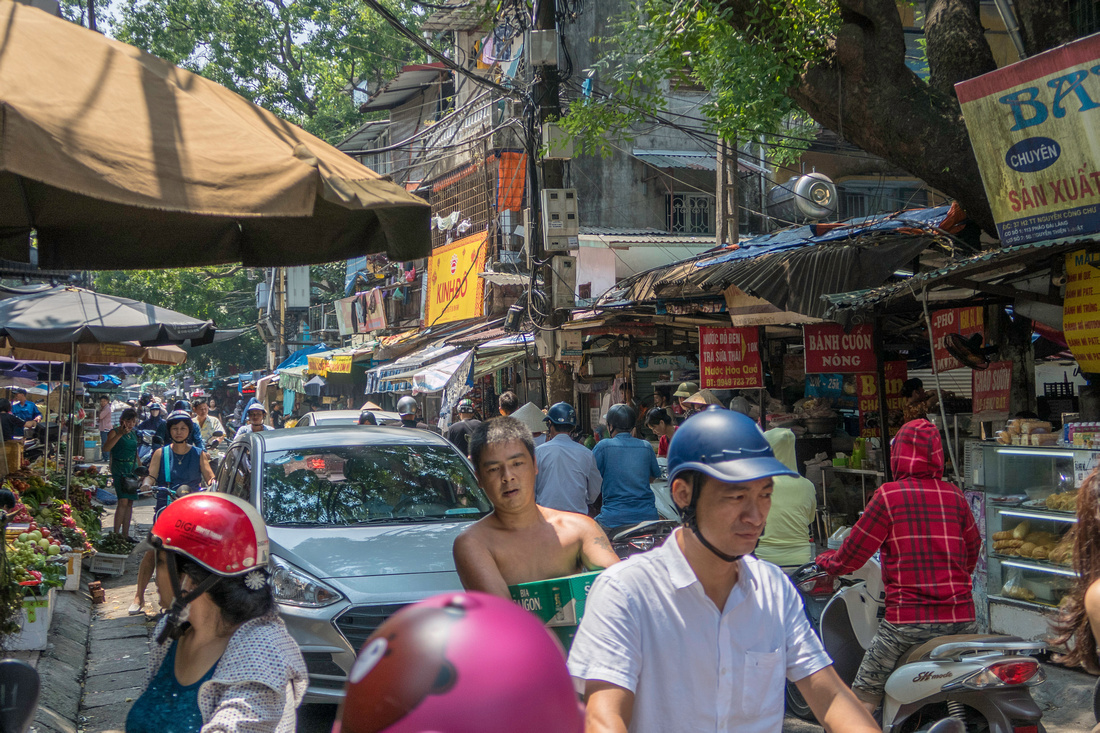 The chaos of Hanoi

Oh my, it's been a few years since I've been in the heart of a large city in SE Asia.  I had forgotten what (organized??) chaos that it was.  After checking into the hotel, we went for a walk.  In the city center, motor bikes seem to outnumber cars by about 20 to 1.  In fact, in the narrow streets among all of the bikes and scooters, even the smallest cars look huge and out of place by comparison. 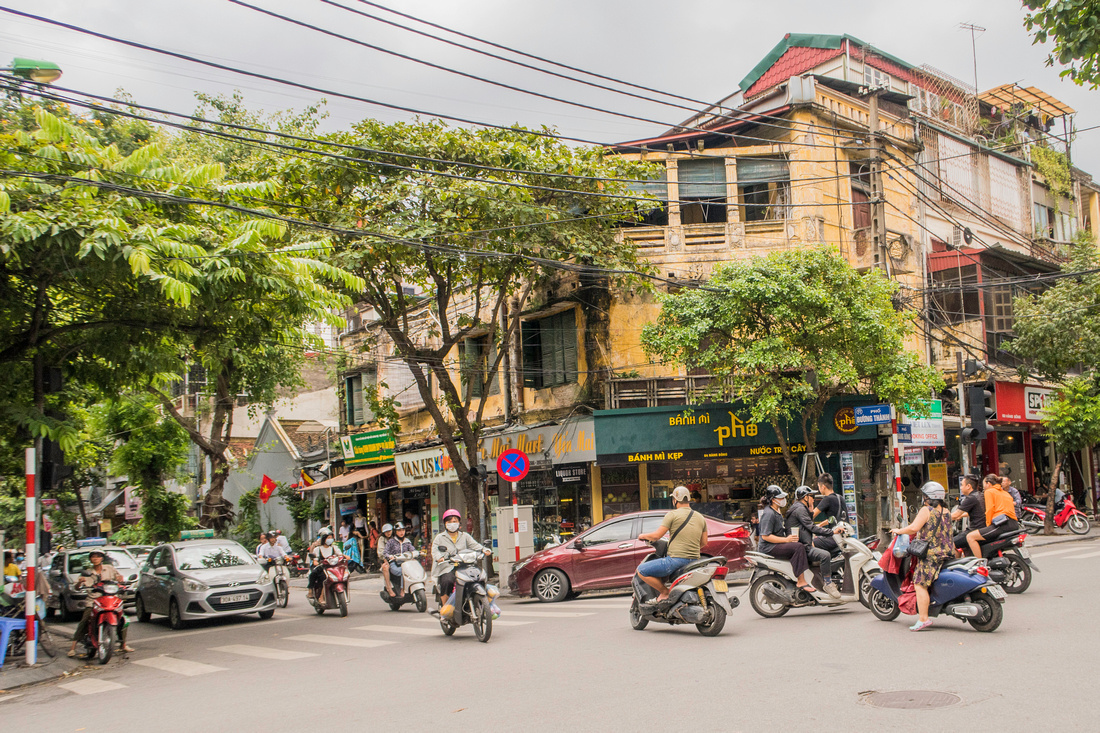 None of the intersections have stop signs, a few have stoplights - some of which even work but are ignored by many drivers.  So, at every intersection this elaborate weave takes place where everyone eventually gets where they are going.  Add into the mix bicycles and pedestrians - who are forced to walk in the street because all of the sidewalk space is taken up with scooter parking, vendors selling their wares, and impromptu restaurants with patrons squatting on tiny plastic stools - and, well you can just imagine...  Crossing the street is like a real-life game of Frogger. 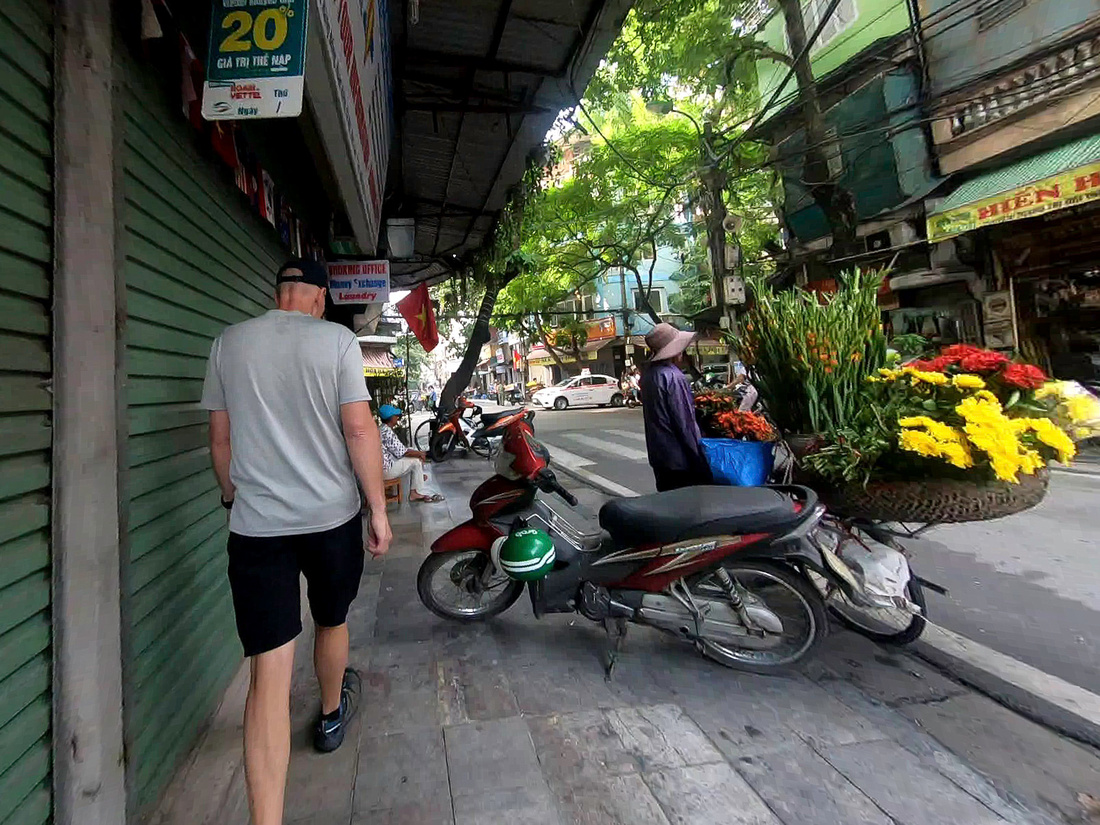 Woman sells flowers from her bike in Hanoi

A woman selling flowers from the back of her bicycle. 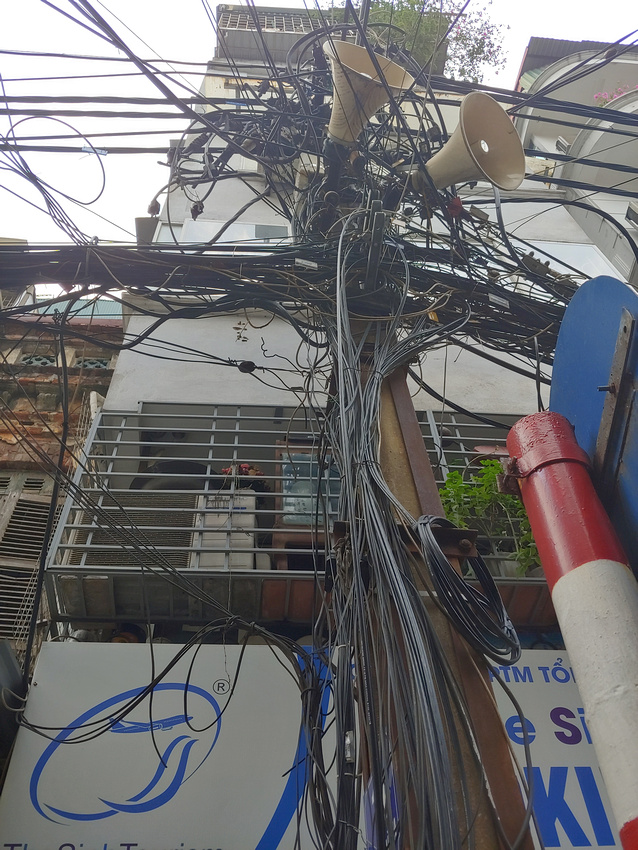 Can you say fire hazard?

It’s amazing that this all somehow works.

Staying in Hanoi for 6 days, we've spent our time exploring the city, booking a few tours and planning the rest of our time in Vietnam.  There are some temples, parks and museums worth seeing in Hanoi but honestly the thing I like best is just walking around.  The city has an energy of its own and everywhere you look is something surprising, entertaining or just plain curious. 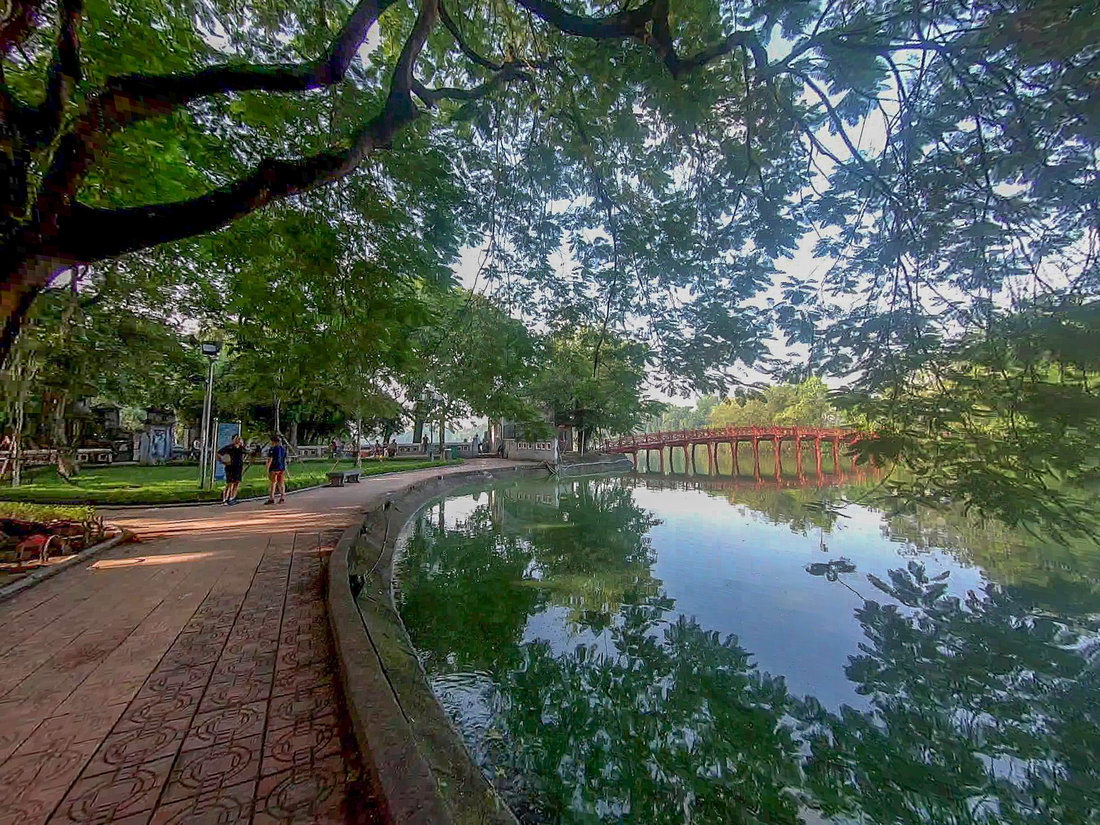 A walk around the lake in Hanoi

A walk around the lake in the morning

Every morning, we have gotten into the habit of walking around a nearby lake after breakfast.  We are not the only ones - every morning there are people in the park doing Tai Chi, playing badminton, line dancing, ballroom dancing, jogging... or just people watching.  On the weekends, the main road around the park is closed off all day to accommodate even more people enjoying their day off and in the evenings the whole scene takes on kind of a party atmosphere. 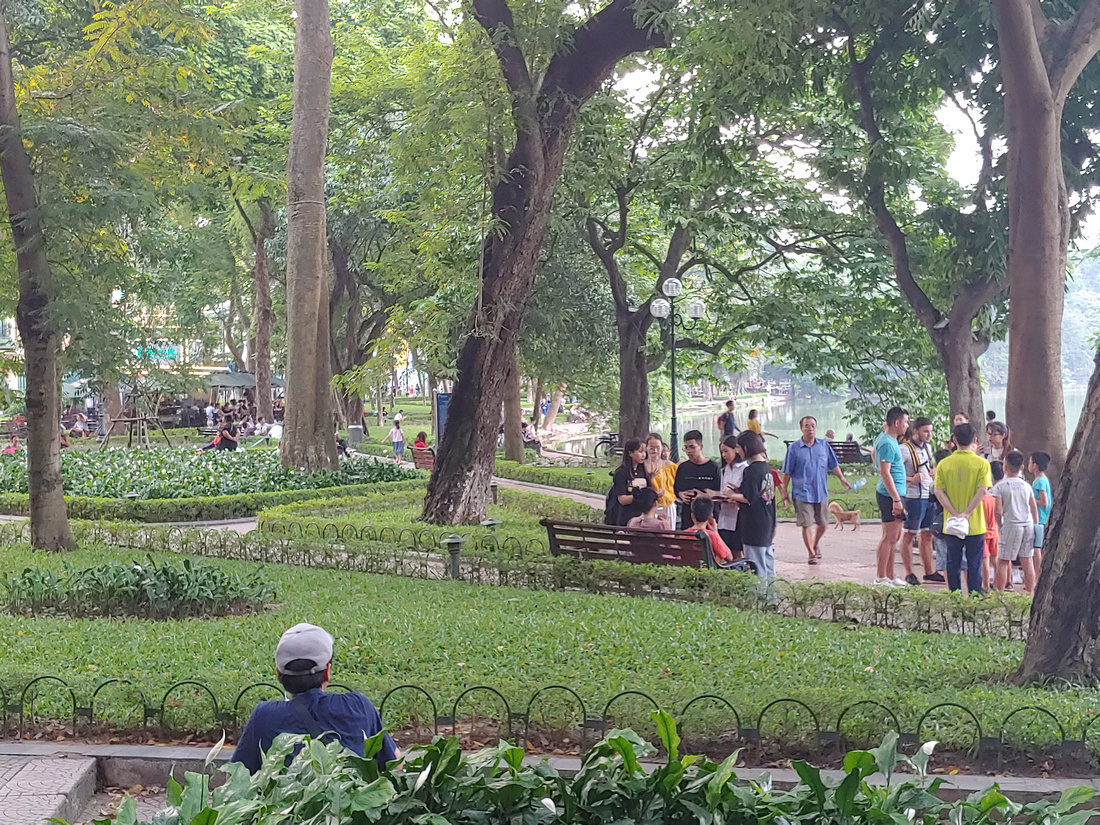 Saturday evening in the park 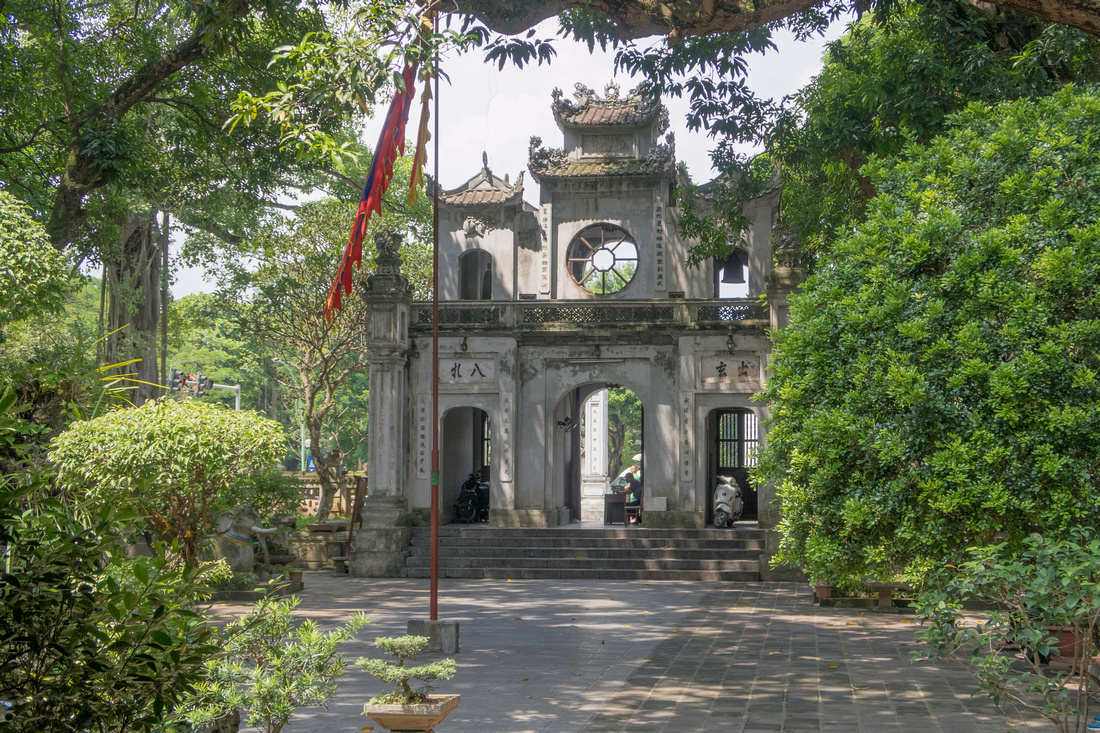 A temple in the middle of the city

Traveling in Vietnam is certainly easy on the wallet.  A nice hotel room here in the heart of Hanoi runs us about $50.  In other towns, we'll pay half that or even less.  Food is plentiful and also cheap - the trick is figuring out where to go and what to order, and then of course how to eat it properly.  We took a walking food tour for a few hours with a local university kid who took us to several different spots and introduced us to many things we hadn't tried yet.  In the evenings, we've gotten stuck in a routine of walking down the block from our hotel to get a beer and a Bánh mì sandwich at a local cafe on a busy corner with great people watching.  Here, dinner costs us about $5. 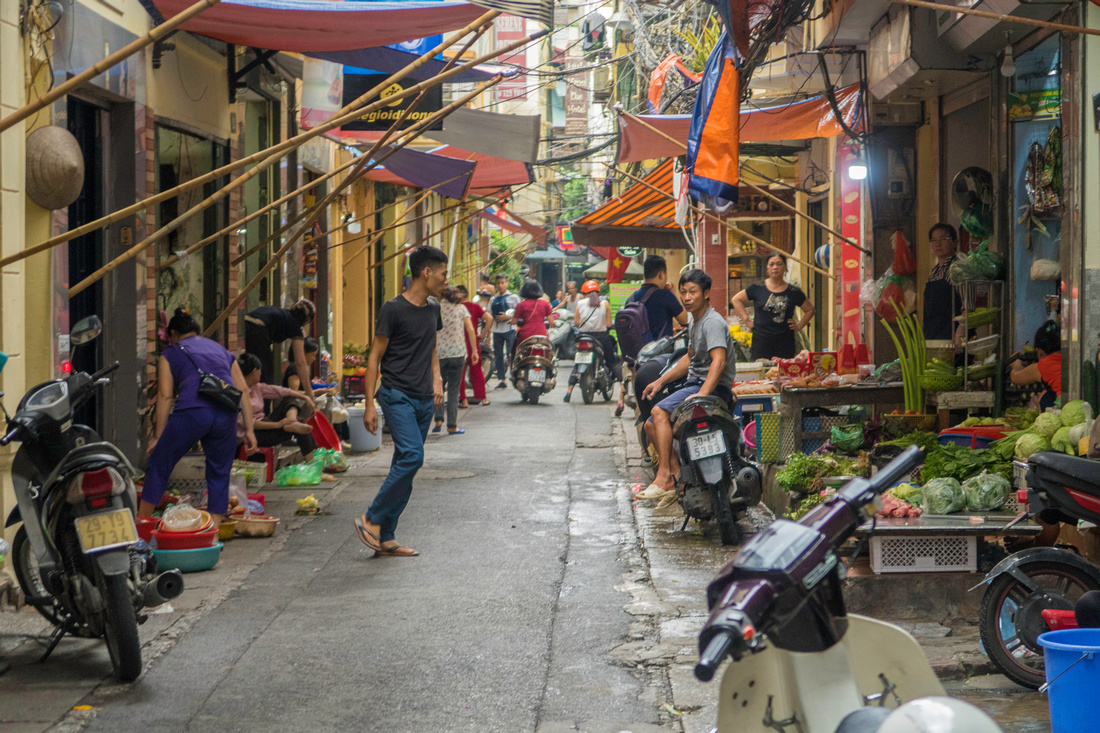 A Narrow Market Alley in Hanoi

A narrow alley in the Old Quarter

In the maze of streets of the Old Quarter, Google Maps is a great tool not just for navigating but for finding our way back to a shop or a restaurant that we previously visited.  One of the benefits of big brother location tracking is that I can scroll back to a certain day and trace my movements and see when we visited and how long we stayed in order to see where we had lunch so that we can find it again.  That feature has come in handy more than once. 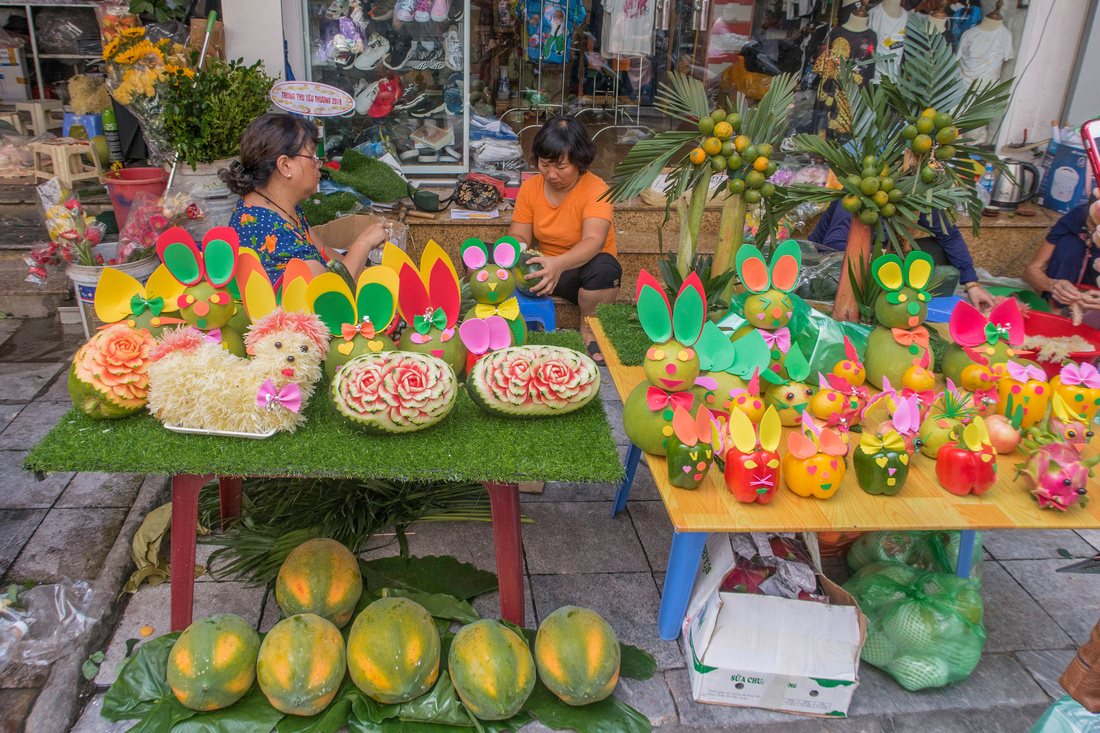 We have booked a few organized tours to explore northern Vietnam some more over the next week before we head south from Hanoi.  Vietnam is shaping up to be a good time!

By the way, in case you were paying attention to our original plans which took us to China after Japan, we decided to nix China from our itinerary.  We would have had to go to Hong Kong for several days to get a China visa and the protests would have made that somewhat difficult, so we decided to change our plans and skip ahead to Vietnam.