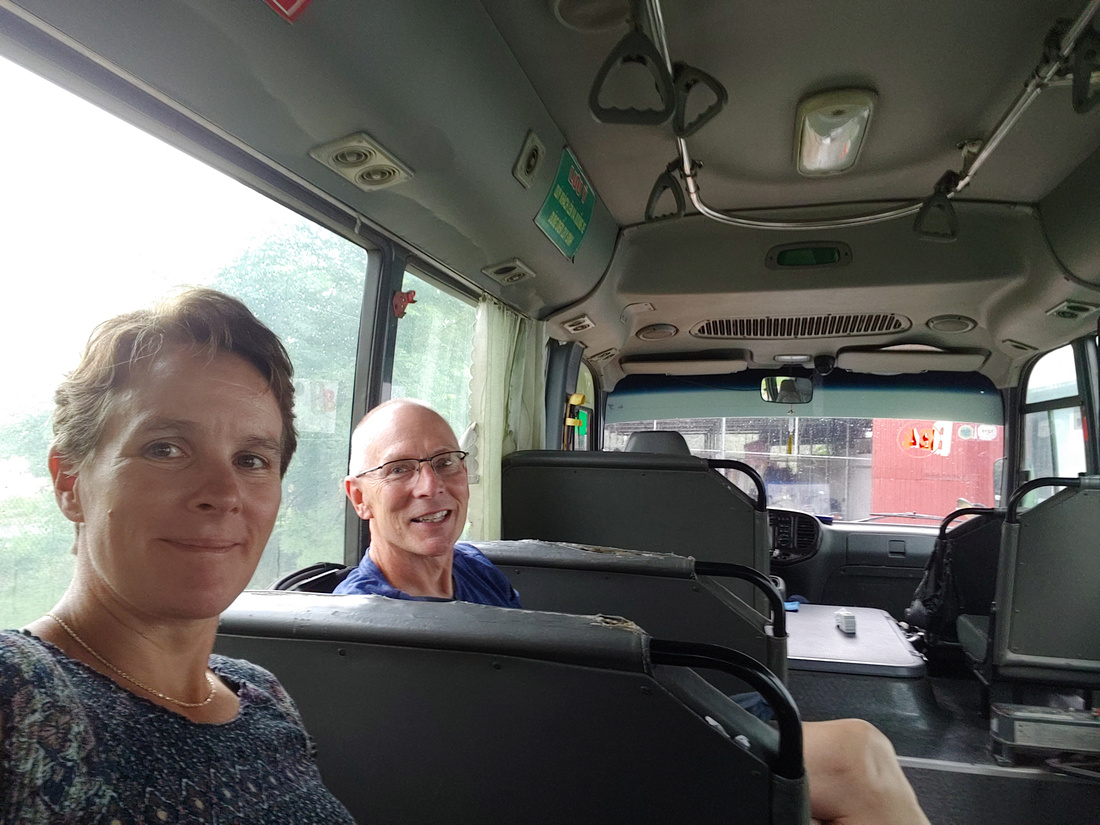 Waiting on the bus to nowhere

Waiting on the bus to nowhere

As I am writing this, we are sitting by ourselves in a 1970's era bus parked behind some random building in Dong Hoi, Vietnam waiting for the bus to finally leave for our next destination of Phong Nha.  The bus ride is supposed to take about an hour and a half, but since boarding about an hour ago we have stopped at a restaurant so the driver could have lunch, driven across town and then parked behind this building with the driver promising to return in an hour.  There aren't sufficient language skills on either side to find out why we have to wait here an hour or whether we will actually depart after that time.  So we wait.  We didn't really have anything else to do today so as long as we actually get there sometime today, all is good.  But I am getting ahead of myself... 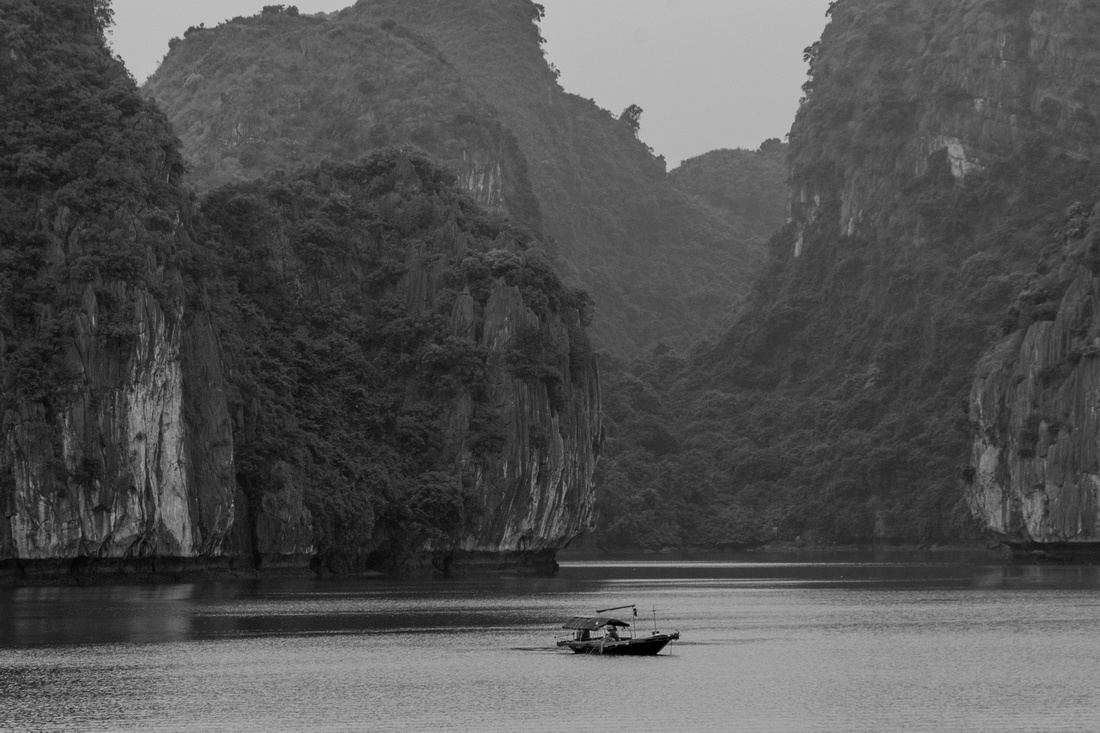 After spending about a week in crazy, busy Hanoi, we took 3 different tours that allowed us to explore some more of northern Vietnam.  The first tour was a relatively luxurious 3 day boat cruise in Lan Ha Bay.  Halong Bay is the most famous area for this activity, but in recent years it has become overrun with tourism and since we weren't looking for a booze cruise, we decided to go to Halong's quieter neighbor Lan Ha Bay.  The scenery is much the same, but Lan Ha takes a bit longer to get to. 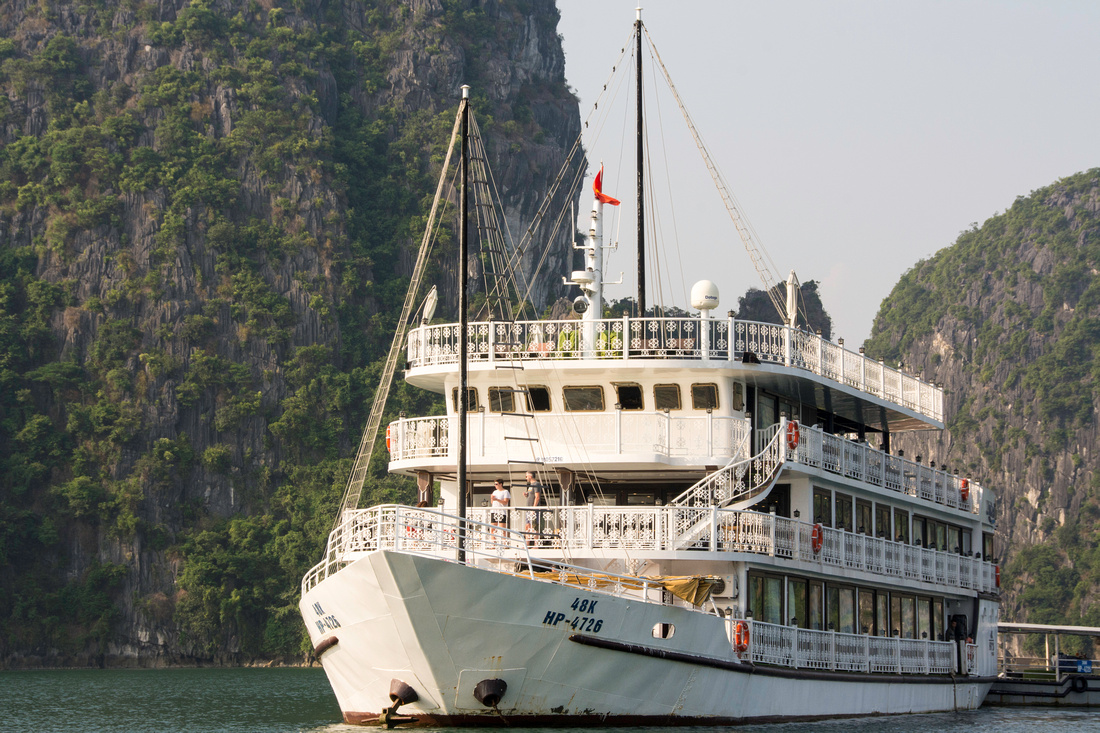 The boat had about 20 individual cabins, more spacious than your standard cruise ship cabin.  The first day we spent on a bus and then a ferry to get to the launch point for the boat and then another 3 hours cruising out to Lan Ha Bay.  We finished up the day by kayaking around the bay and into a private little lagoon that was only accessible through a little tunnel when the tide was not at its highest level. 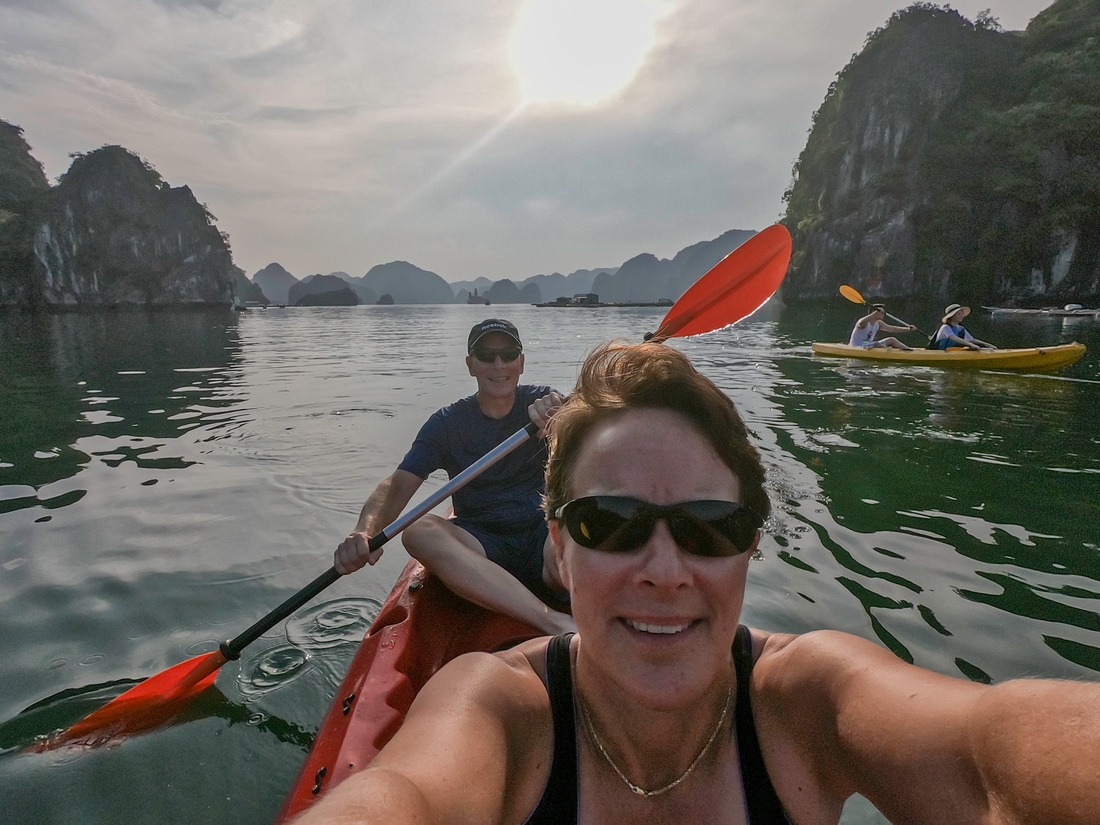 I imagine that the bay may occasionally see storms, but most of the time the sea and the air is quite still so the kayaking was easy and enjoyable.  The other guests on the boat were quite a varied bunch with groups from Europe, Russia, India, and Mexico among others.  The second day we spent hiking on Cat Ba island and the third day we rented bikes and cycled to a local village on the island. 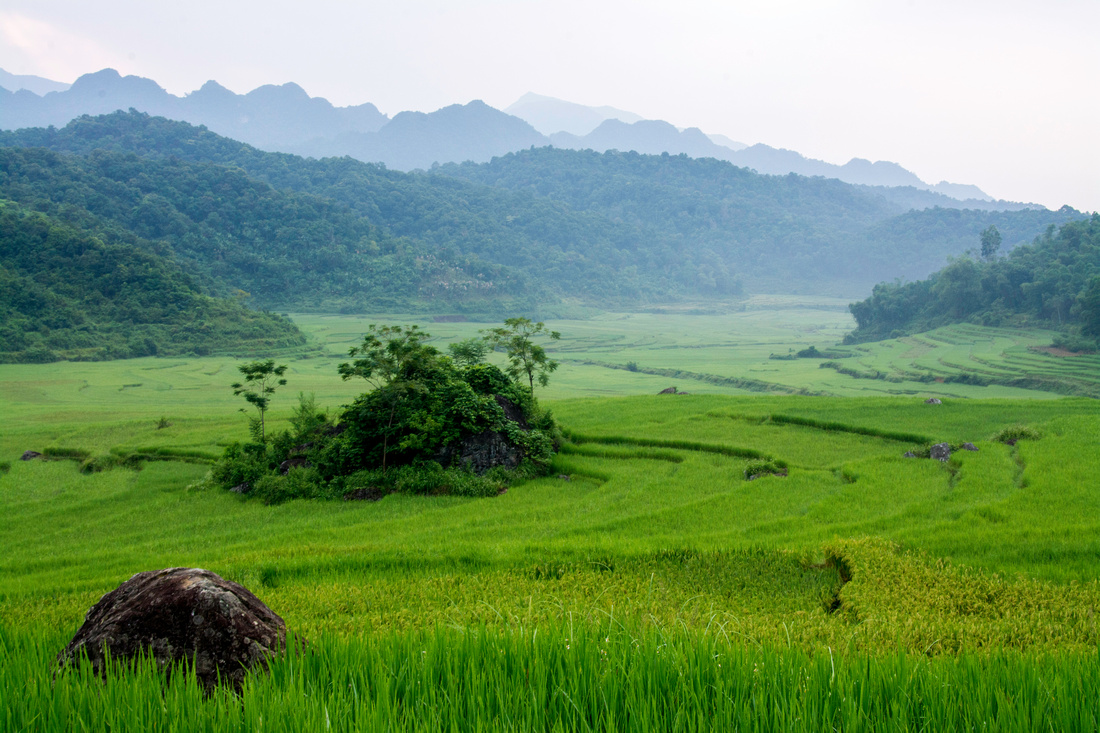 The second tour was something that I wanted to do which was a photography tour in Pu Luong nature reserve.  Our photographer guide picked us up at our hotel and off we went for another long drive to the reserve.  This was an area with small indigenous villages and lots of terraced rice fields. 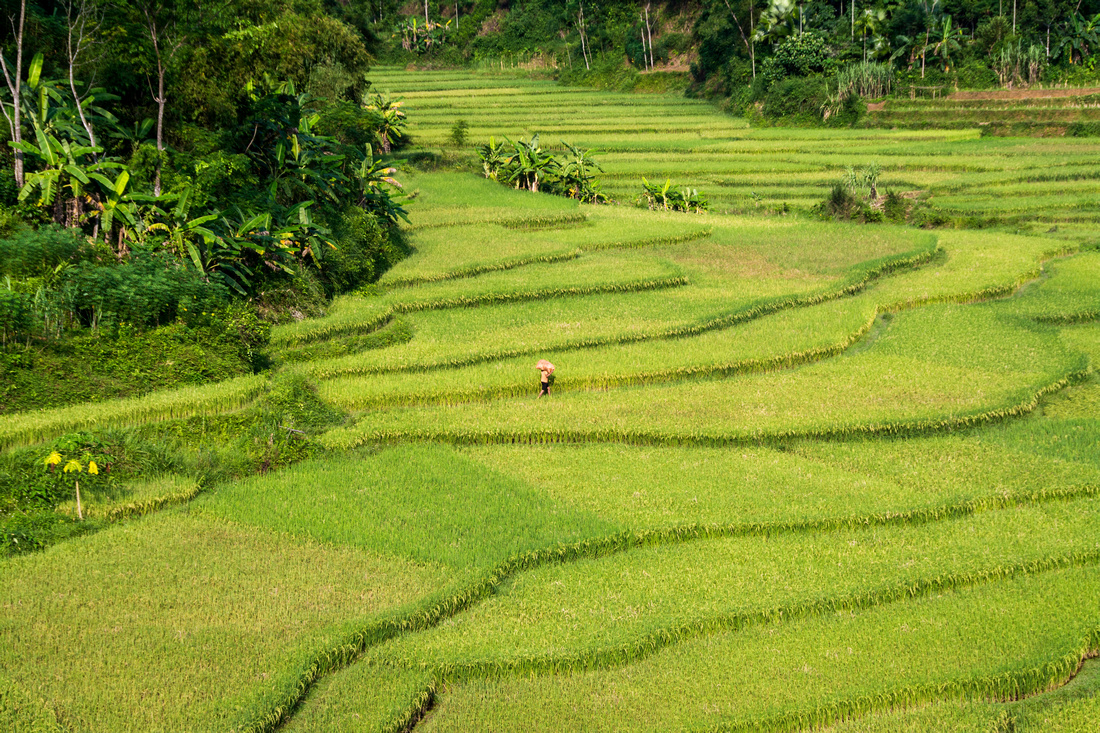 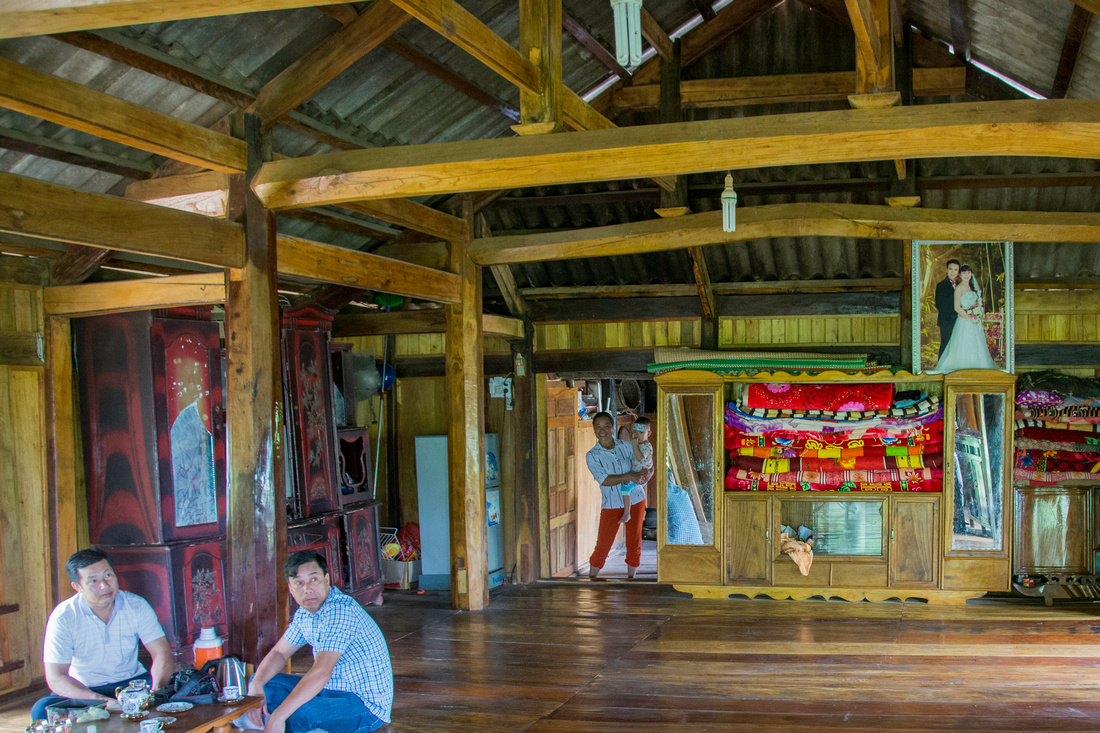 Traditional stilt home where we had lunch

Traditional wooden stilt home where we had a delicious lunch

The rice was just ready to be harvested so it was a nice golden color.  I wanted to get some of those iconic shots of the terraced rice fields with the workers in their traditional conical hats with a water buffalo grazing nearby.  As it turns out, it takes a lot of work to get some of those shots!  We spent a couple of days trekking through muddy rice fields looking for just the right shot and spent an enjoyable night at a local lodge, eating dinner with our guide and laughing over many tiny cups of plum wine. 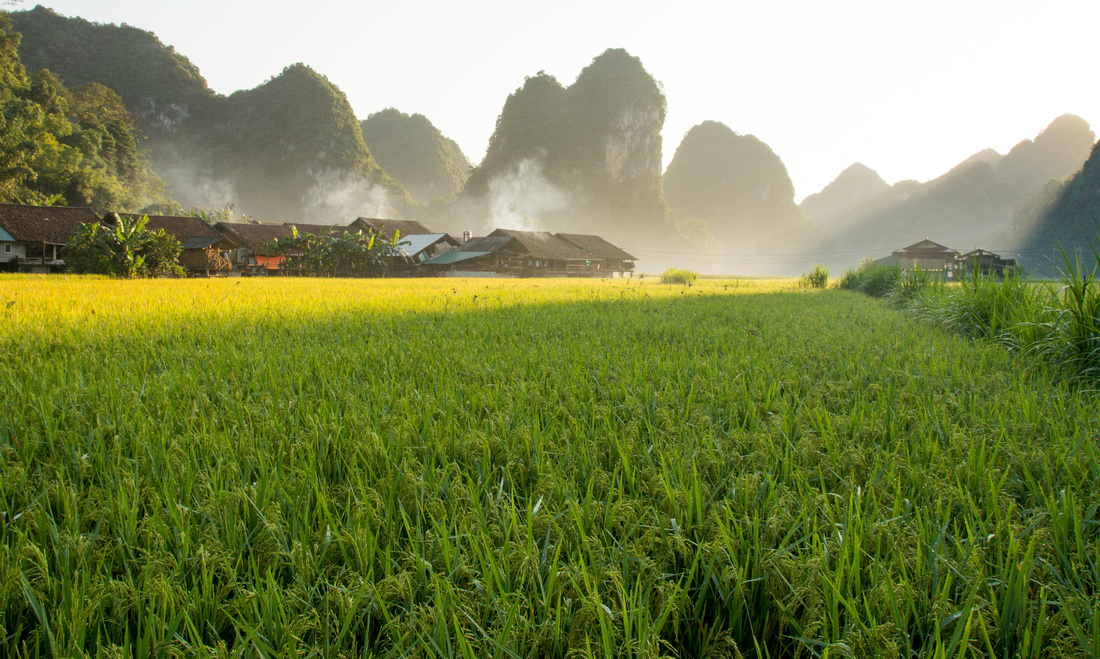 Traditional Tay village where our homestay was located

Traditional Tay village where our homestay was located

Our third tour took us up near the border with China to visit some caves and an impressive waterfall, and then take a boat ride through a national park.  On this tour we stayed in two different homestays in traditional wooden stilt homes.  The first one was in a typical village where the primary activities were rice farming and making incense sticks. 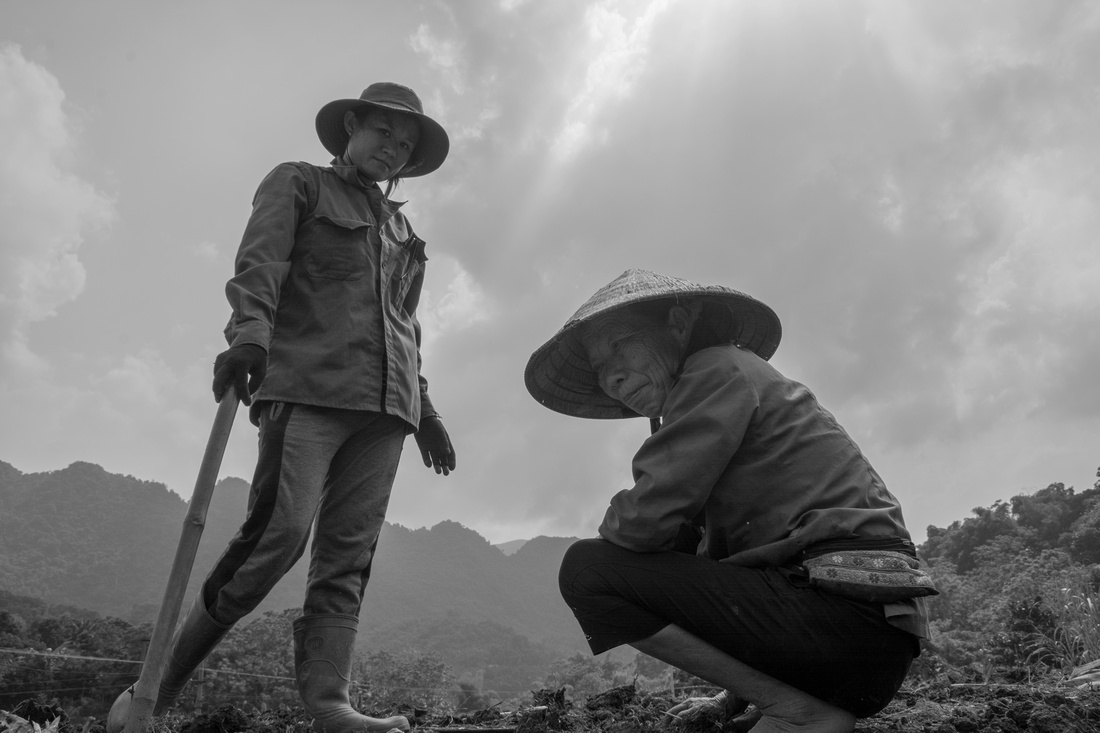 What impressed me most about these areas that we visited is that the villages were very traditional and the economics of tourism has not taken over (yet).  There are no huge tour buses, no cheesy souvenir shops, no tourist restaurants - really nothing beyond the homestays that have popped up over the last several years.  Foreigners are still a novelty and not yet an annoyance. 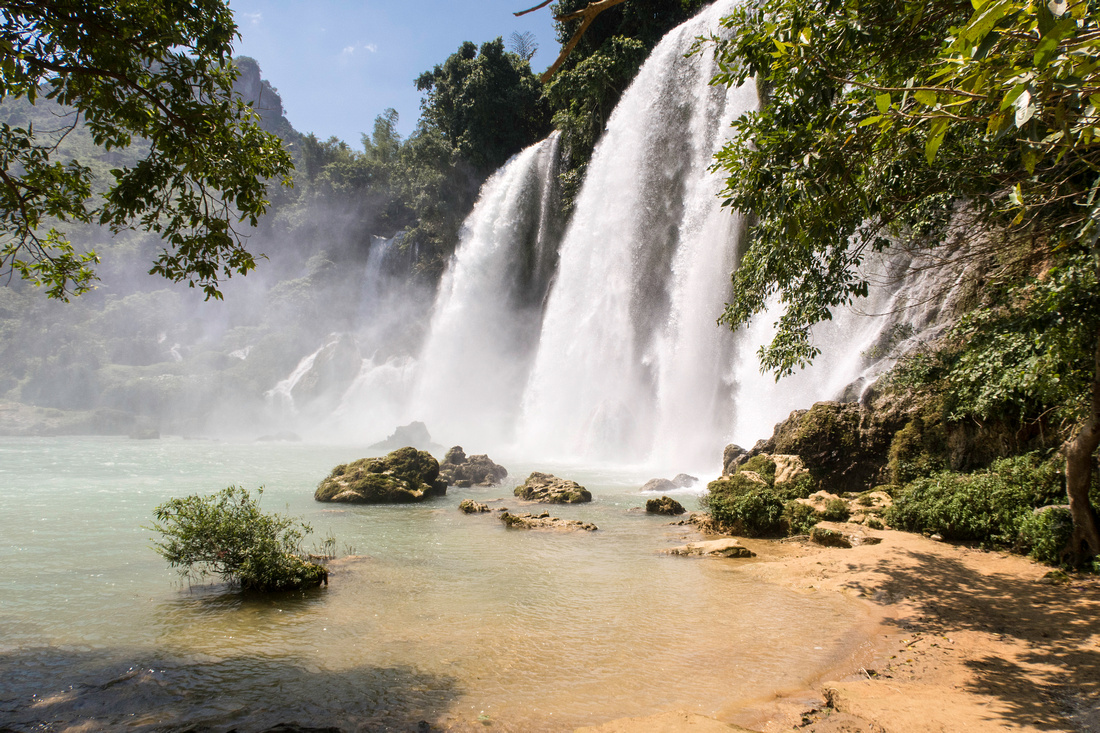 Ban Gioc waterfall near the border with China

After returning to Hanoi one last time, we caught a train the following morning to Dong Hoi which brings us back to this bus.  Since I started writing, the driver has returned and a few other passengers have joined us.  After trolling around town for another 20 minutes looking for more passengers and a quick stop at a gas station, we are finally on our way.  Phew!

Mike Nguyen(non-registered)
It's so inspiring reading about your travels. It was a true honor getting to know you two and I wish you both lots of health and happy travels in Vietnam and around the world.
Mom(non-registered)
Loved the stories and pictures. Sounds like some interesting adventures; especially the tunnel at low tide. Reminded me of the kids that were trapped in a cave when the water rose. Have fun; be safe.
No comments posted.
Loading...