When we stepped off the plane almost two weeks ago, made our way through immigration and customs and then went to look for a train to downtown Tokyo, I was immediately struck by the heat.  I knew beforehand that the high temperatures would be in the 90s, but I hadn't accounted for the humidity on top of that.  The first few days, the heat felt absolutely oppressive and inescapable until we began to acclimate a bit.  We have spent these first two weeks in Tokyo and Kyoto.  We decided that it would be easier to use these cities as hubs to explore the surrounding areas rather than moving every 2-3 days. 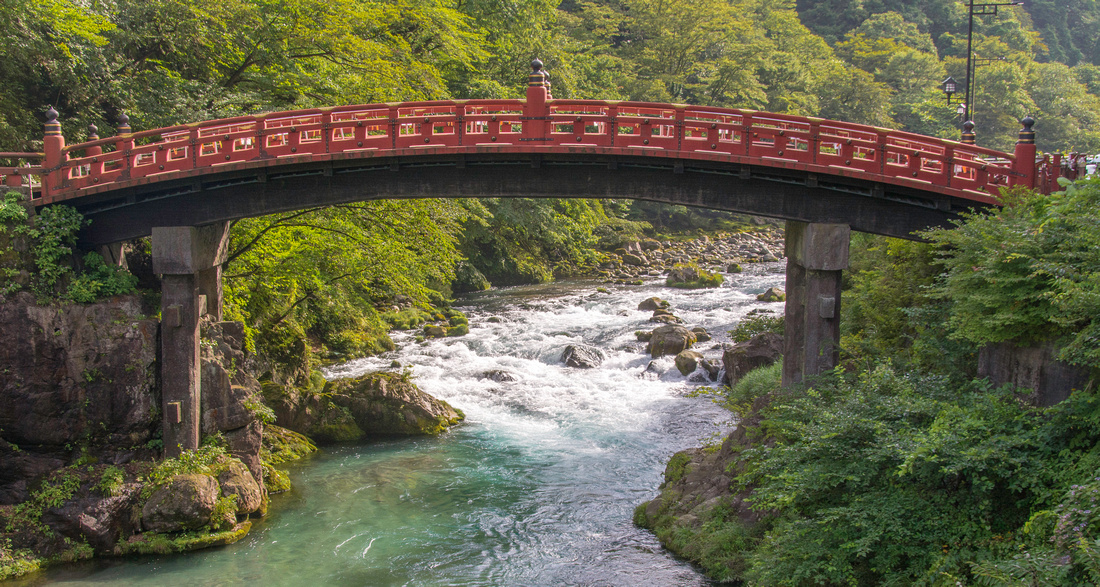 I love traveling in Asia because there are opportunities for great photographs everywhere you turn.  I love the gardens in the middle of the city that feel like a quiet oasis.  The temples and shrines set among the forested hills are also a favorite. 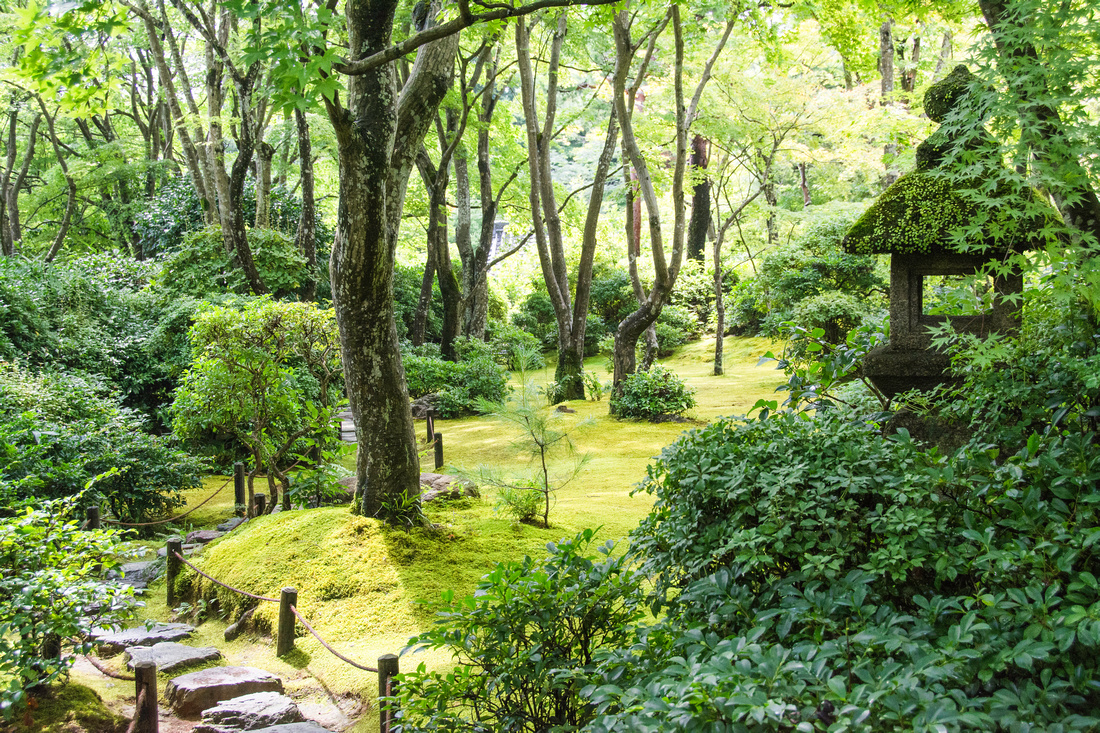 A garden that once belonged to a Japanese film star 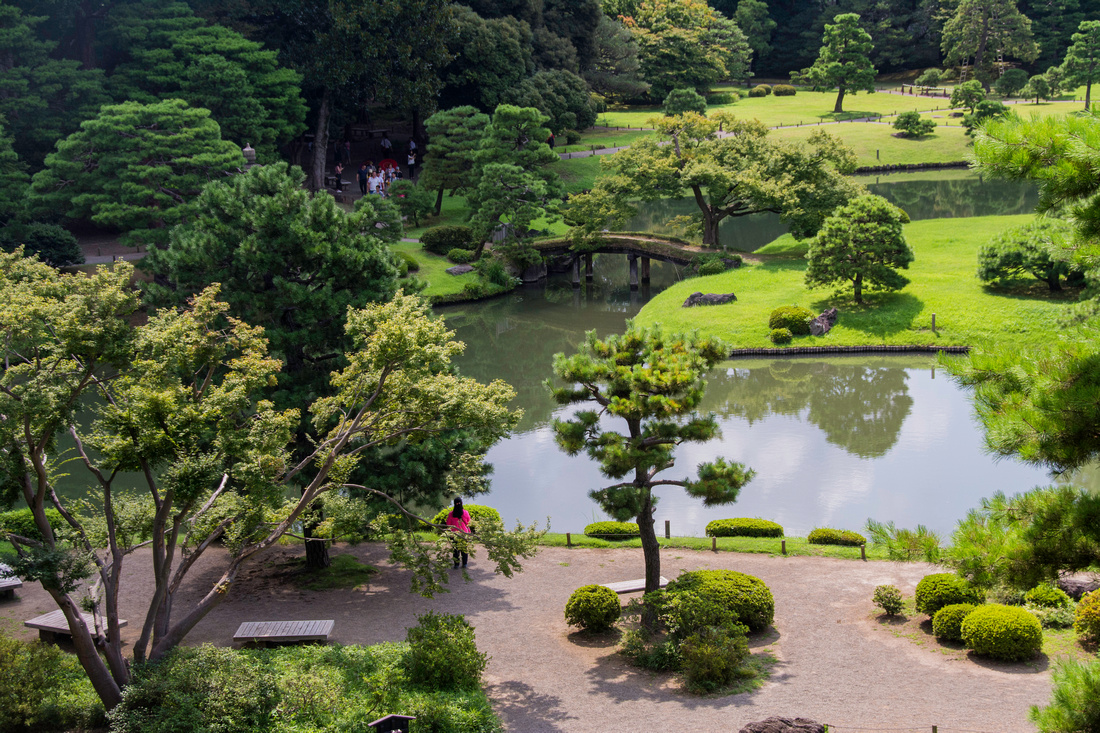 Peaceful park in the middle of Tokyo

A garden in the midst of Tokyo 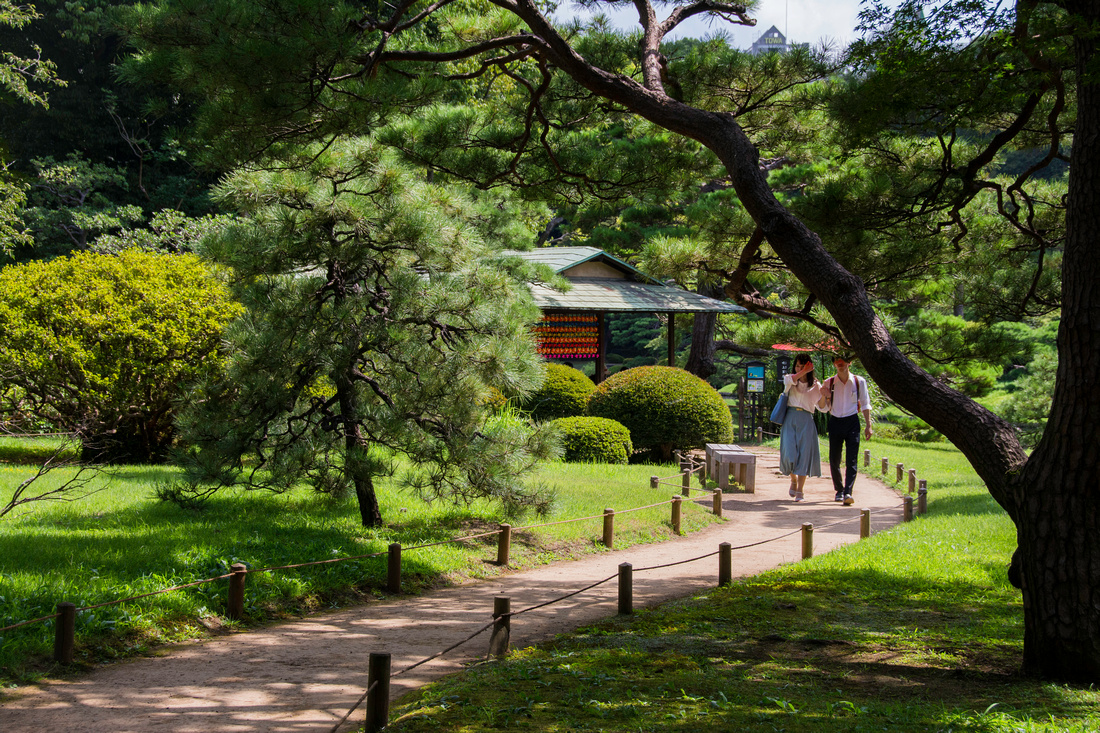 Couple strolling through the park

A couple strolling through a garden in Tokyo

I’ll try not to bore you too much with endless pictures of temples, but here were two of my favorites.

Nikko is a national park outside of Tokyo.  We made the mistake of visiting on a national holiday so we had lots of company.  Part of the park where many temples (Buddhism) and shrines (Shintoism) are located is designated as a UNESCO area.  It was a special experience to hike up among the huge redwoods to visit the sacred ancient structures. 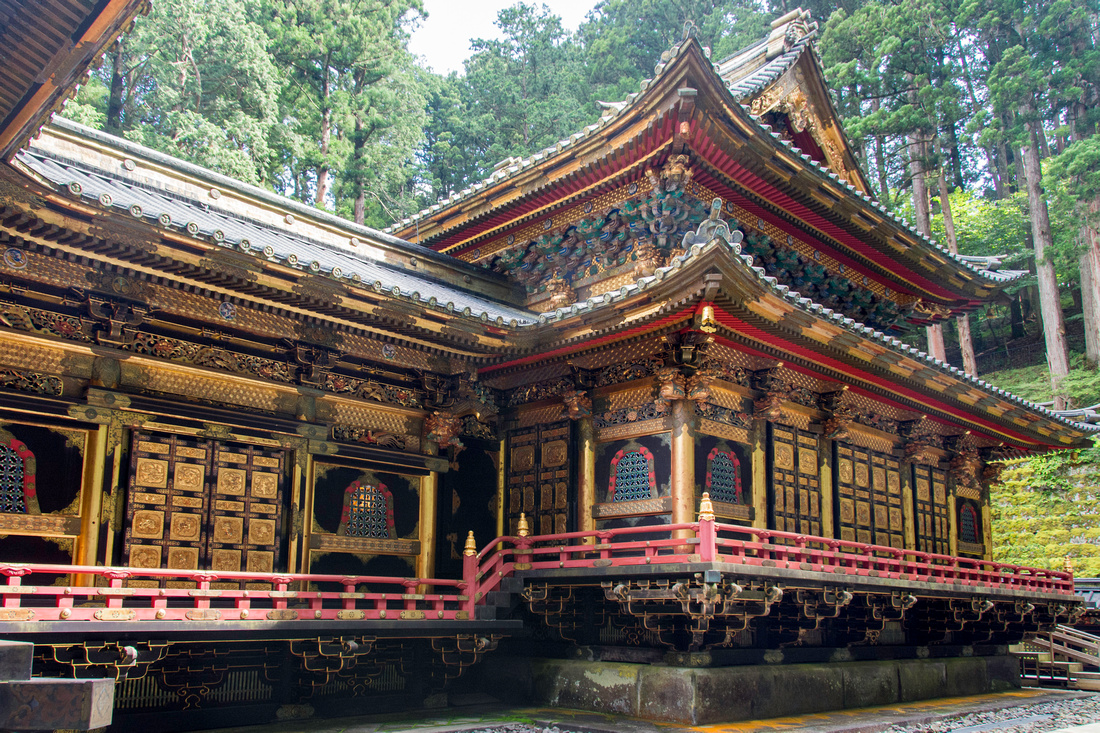 A richly decorated temple in Nikko 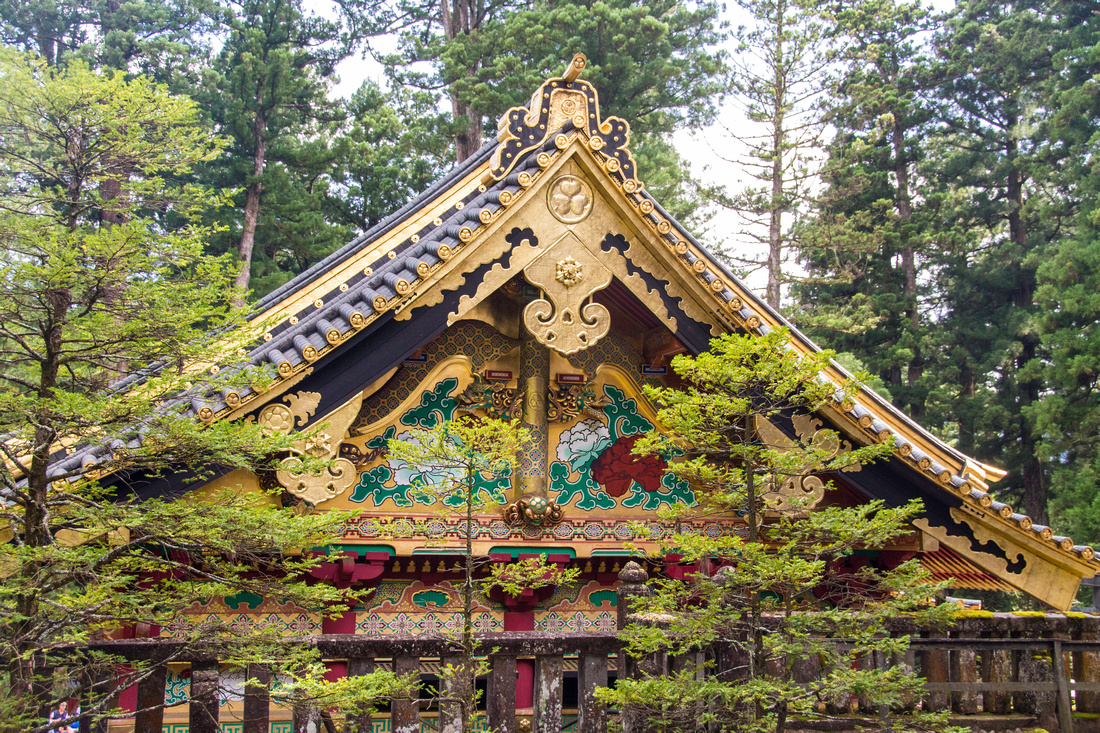 A roofline among the trees 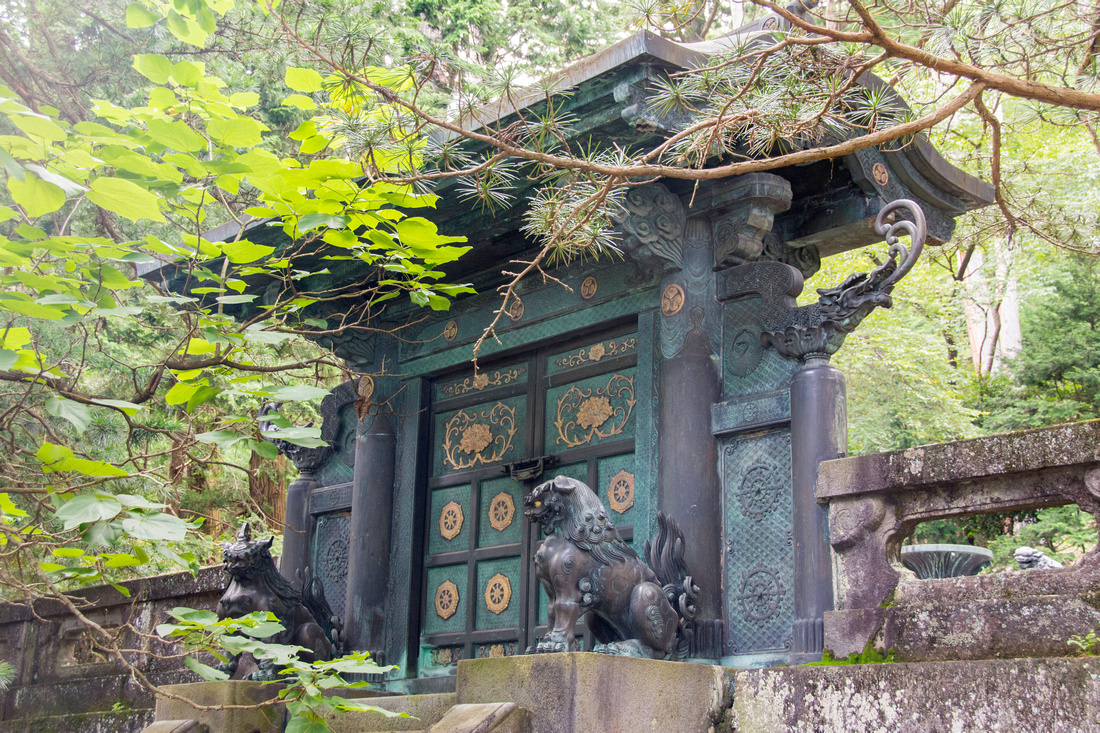 Another favorite was the Fushimi Inari shrine is located in southern Kyoto.  Even though it is in the midst of a very populated area, it is a sprawling network of paths leading through the wooded forests of sacred Mount Inari straddled by thousands of gates. 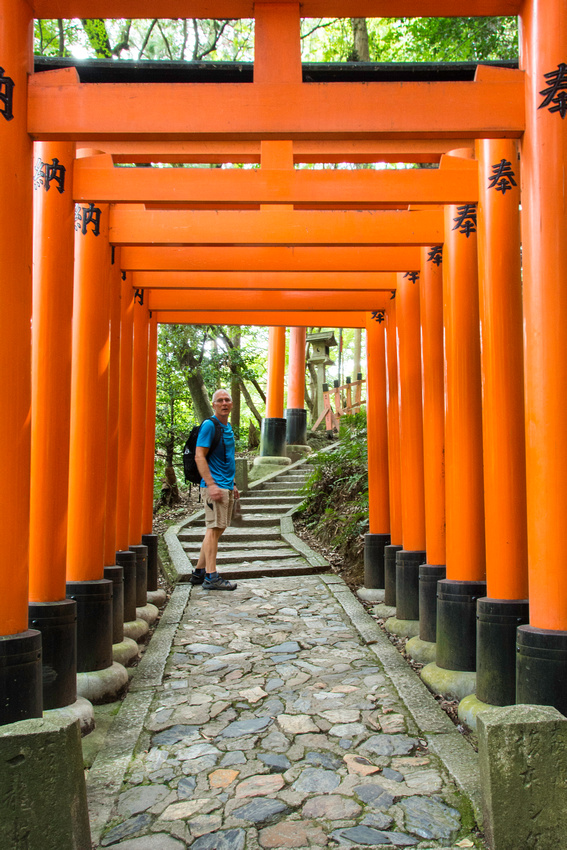 Walking the paths of Fushimi Inari 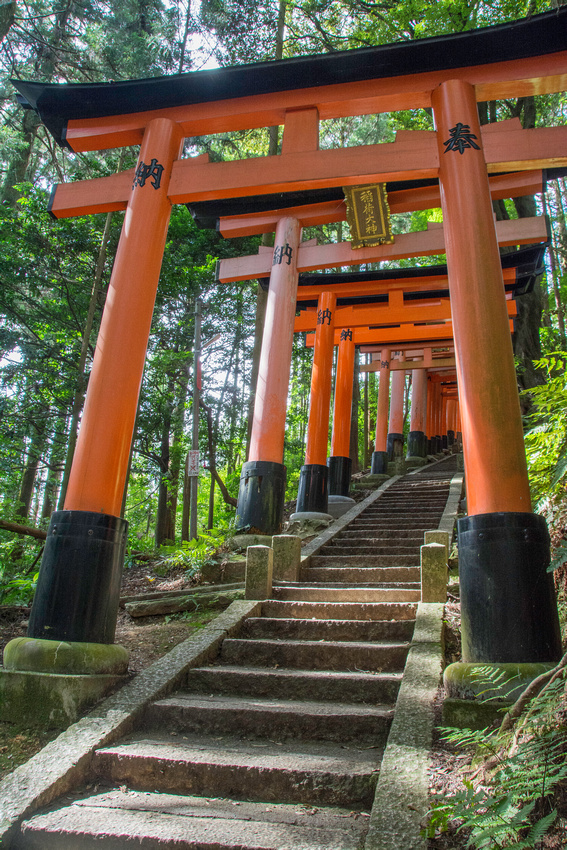 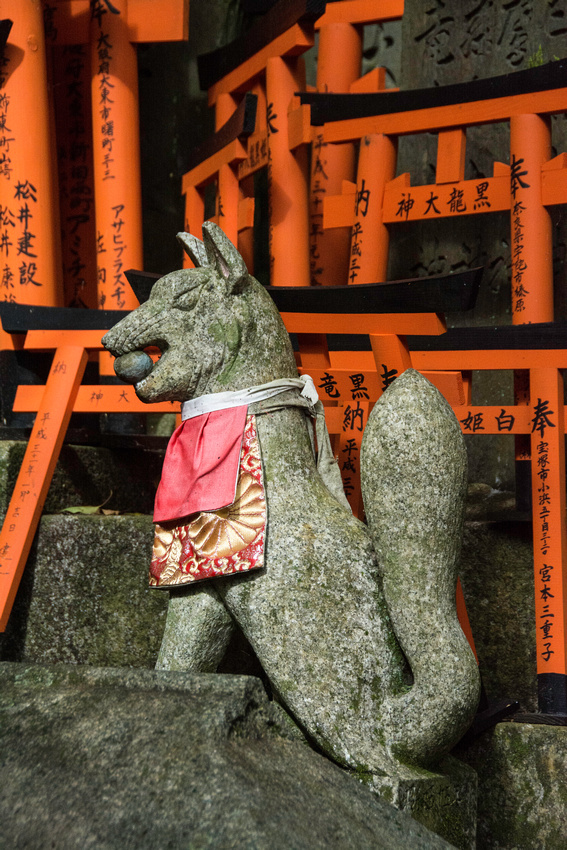 One of the many foxes of Fushimi Inari

We also visited another UNESCO park located in Nara which is about an hour from Kyoto by train.  In addition to many temples, the park is home to hundreds of deer which roam around freely. 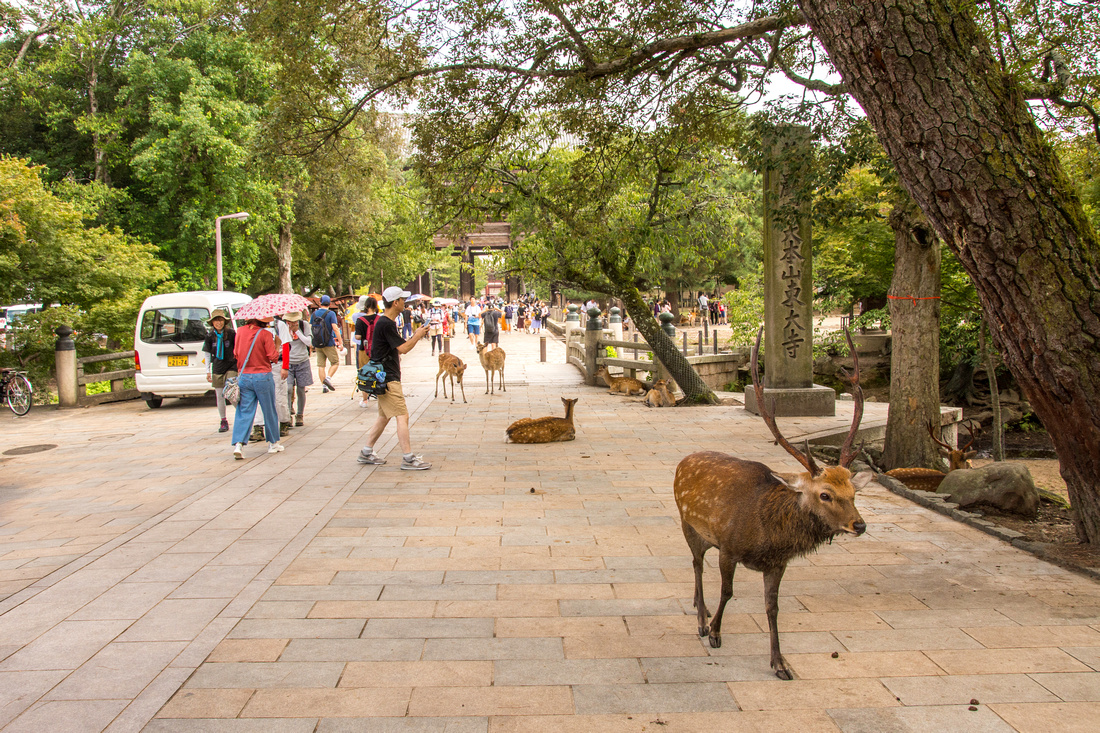 Tourists and Deer in Nara

Vendors sell small stacks of cakes to feed the deer for 150 yen.  We watched in amusement as the deer would bob their heads (mimicking the ubiquitous Japanese head bow) in order to receive a snack.  One of the deer tried to snack on the Lonely Planet book that Barry was carrying. 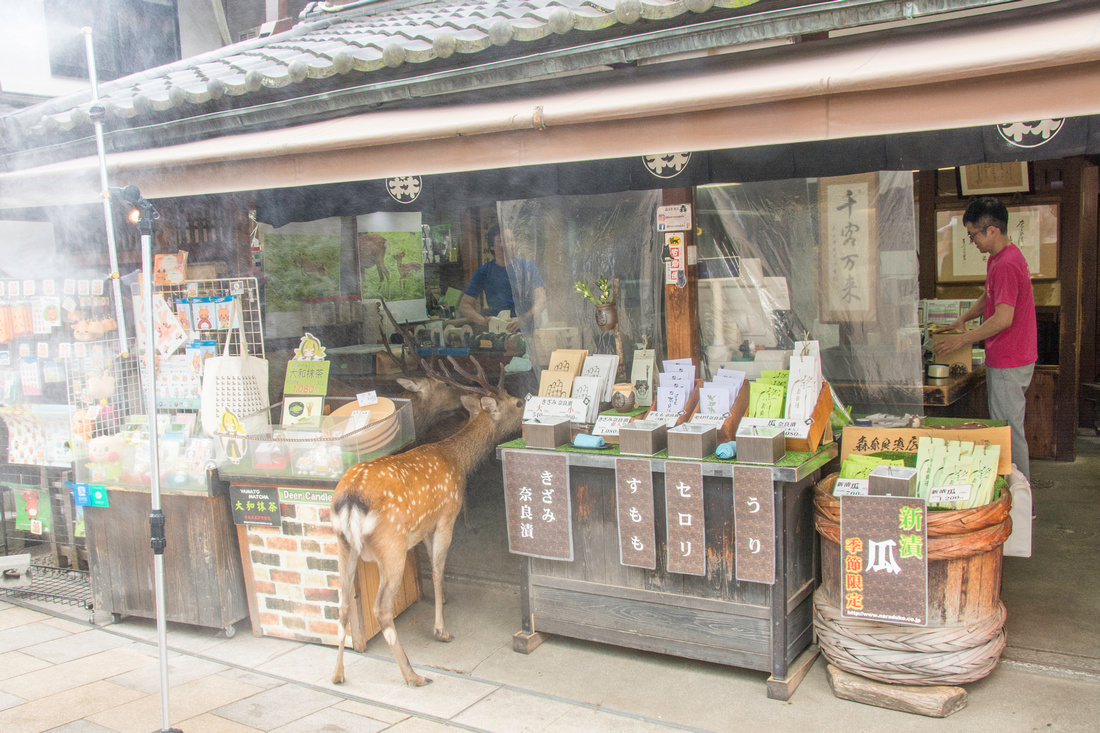 Shopping for a snack 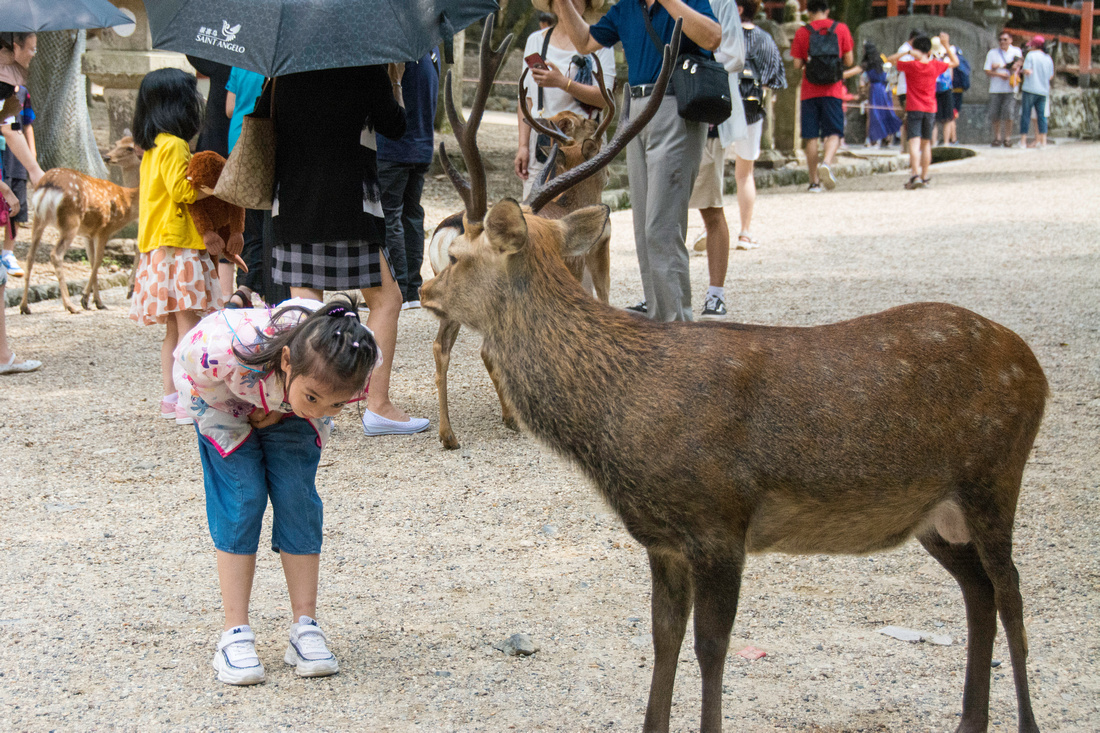 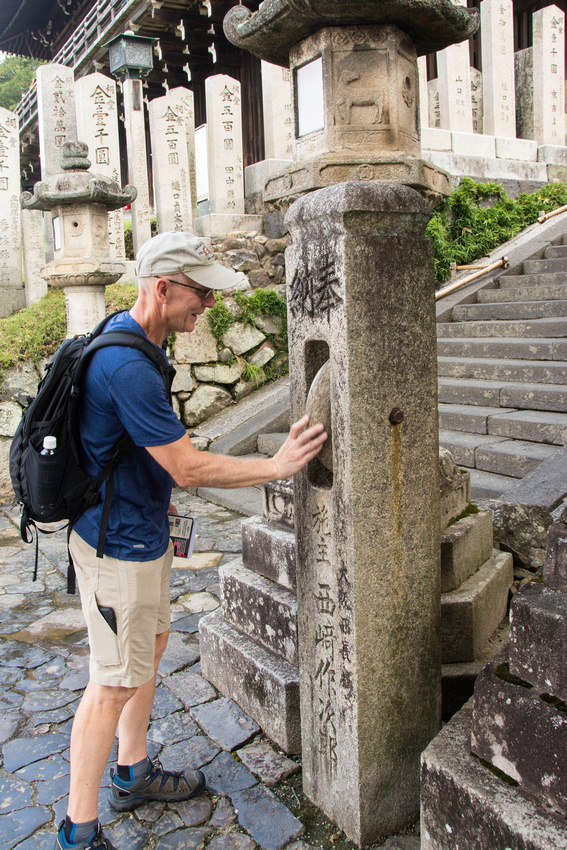 Barry and the prayer wheel

Barry at the Prayer Wheel 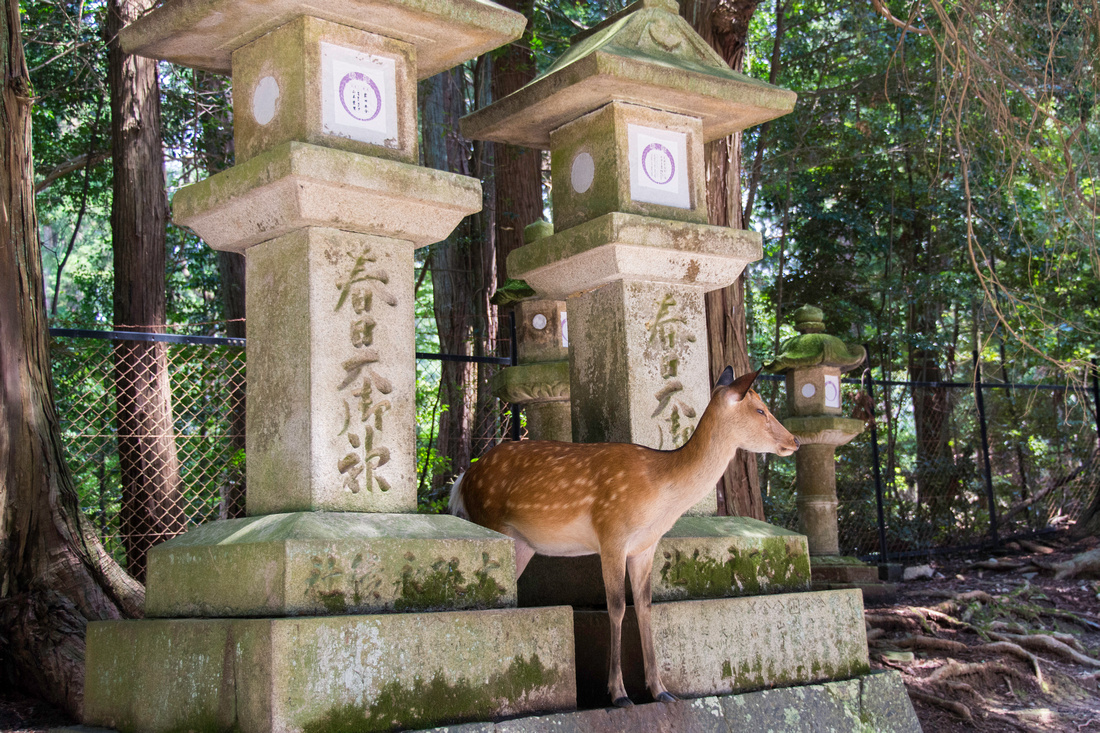 In both Tokyo and Kyoto we have stayed near the main train stations (which serve as hubs for both local and regional trains as well as hubs for the subways) because it makes getting around much easier and because there tends to be lots of shops and restaurants close to train stations.  In both of these cities, the main train stations have had a huge underground complex of restaurants, cafes, shops and department stores.  In both cities, it took us a few days to navigate our way around these areas without getting hopelessly lost.

All of the department stores have one or two floors dedicated to food where you can buy just about anything to take home (or wherever) for dinner.  These stores are busy pretty much all of the time, but they are absolutely packed during the evening rush hour.  With all of the restaurants and food available for sale, I have become convinced that the Japanese don’t actually cook at home! 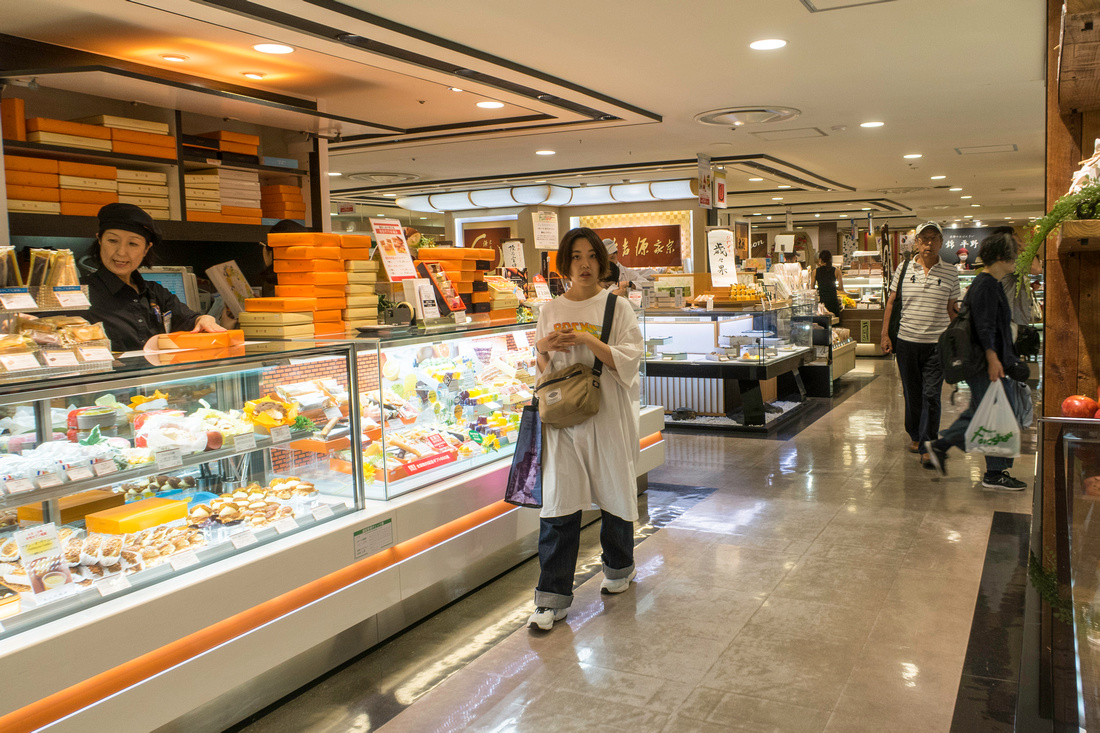 Dessert section of a department store

One of many food-oriented department stores 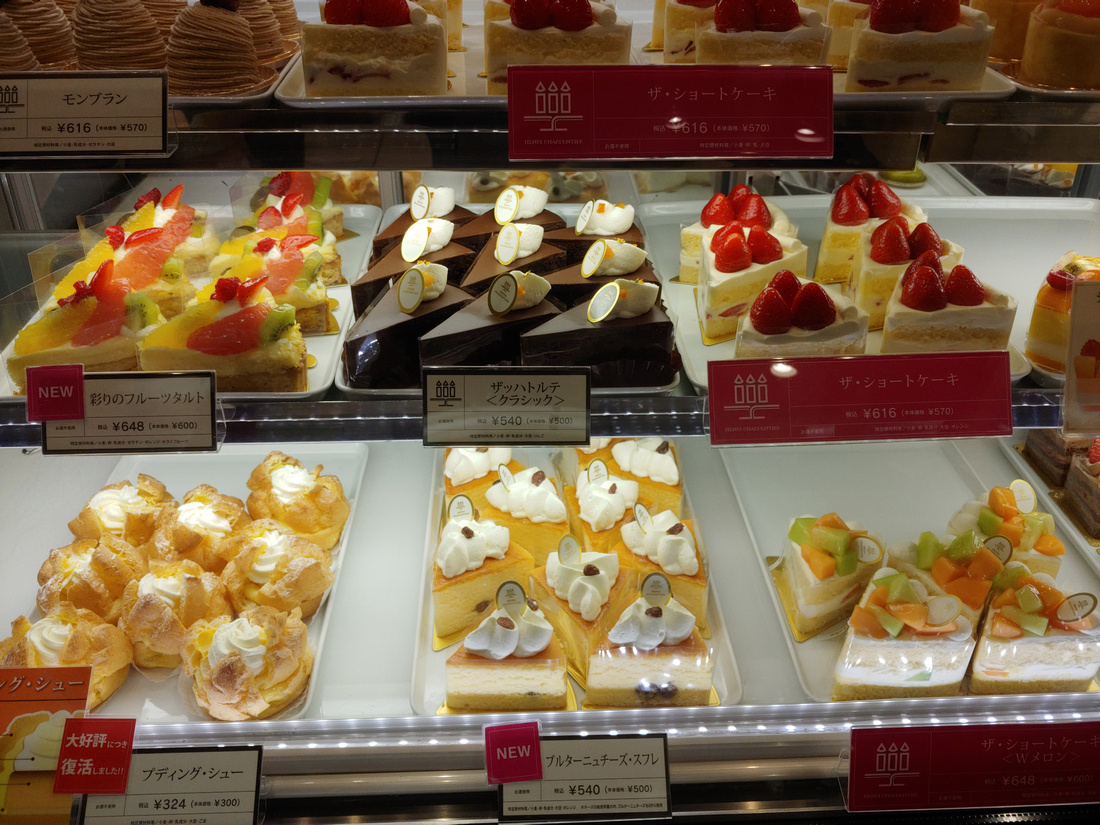 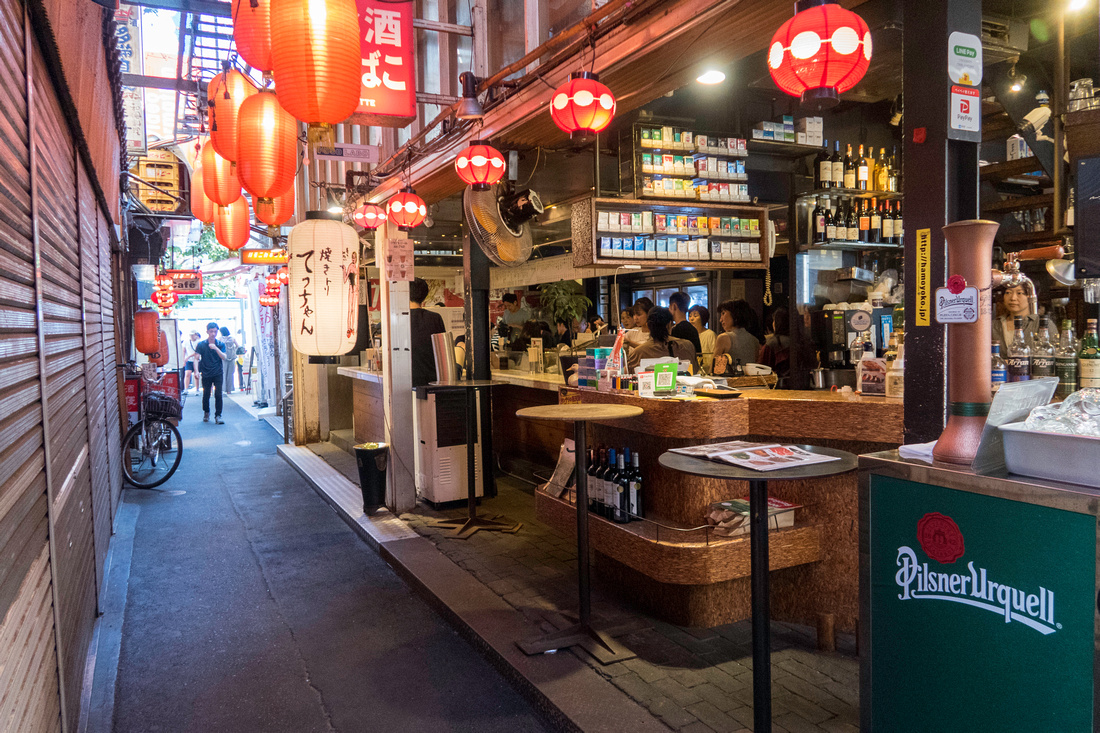 A pub located in a former black market alley near Tokyo 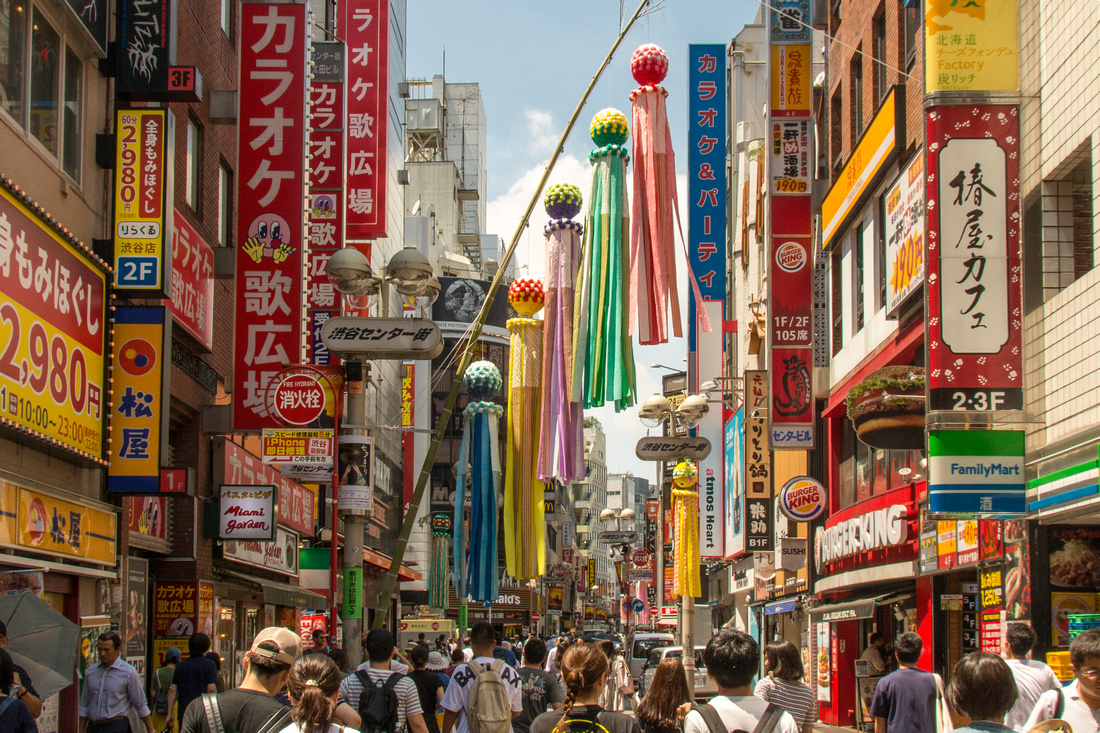 A busy commercial street near Shibuya Crossing in Tokyo

Japanese trains and subways are a great way to get around the city and the country as a whole.  We took a Shinkansen train – which is a high speed bullet train – from Tokyo to Kyoto.  It was like watching a video on fast forward out the window.  Our experience so far is that the trains and subways run exactly on time.  In fact, we watched a show about the Tokyo train system and the schedules are planned down to 5 second intervals in order to maximize their efficiency. 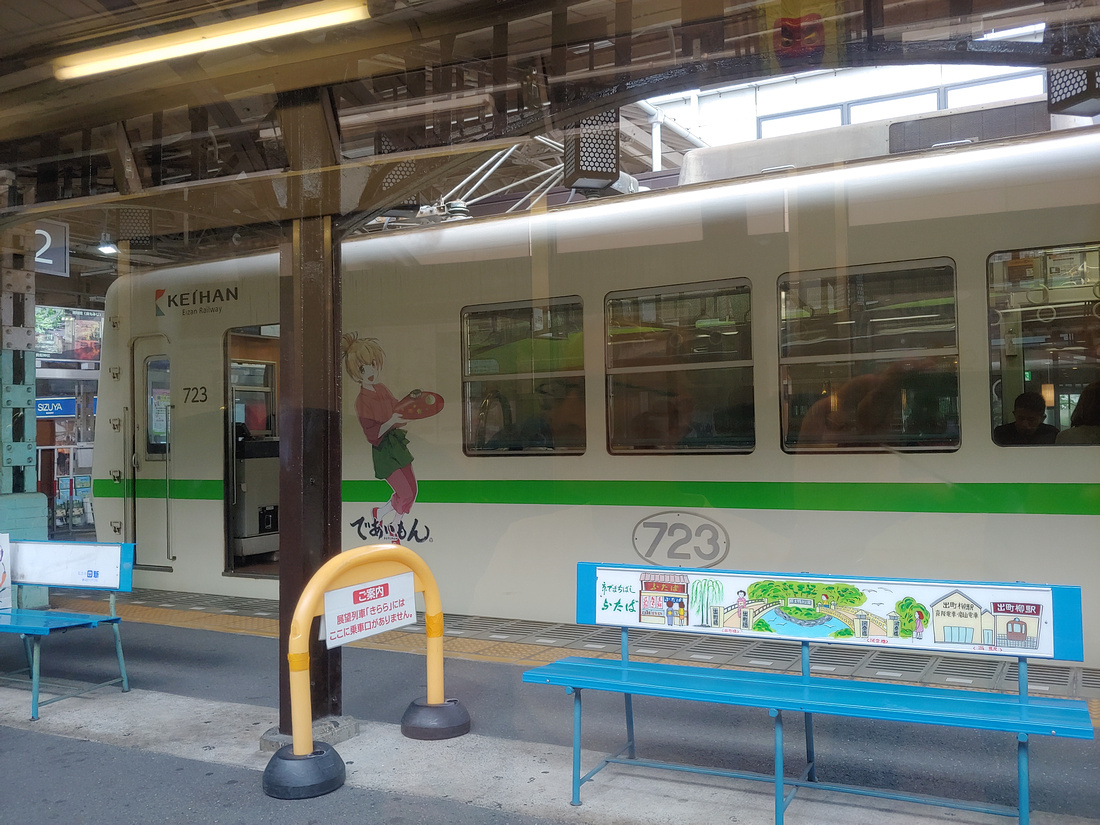 A train station in Kyoto

This morning we headed out early since it was expected to rain later on and we found ourselves boarding a train at the peak of the morning commute.  If you can picture a train that is full (think of an airport train on the Wednesday before Thanksgiving), by Asian standard that train would maybe be half-full.  As long as there is someone left standing on the platform that wishes to board the train, there is room to be made.  You may not be able to breathe properly, but everyone will be able to get to their destination.  After that experience, I understood the reason behind these signs on the platform. 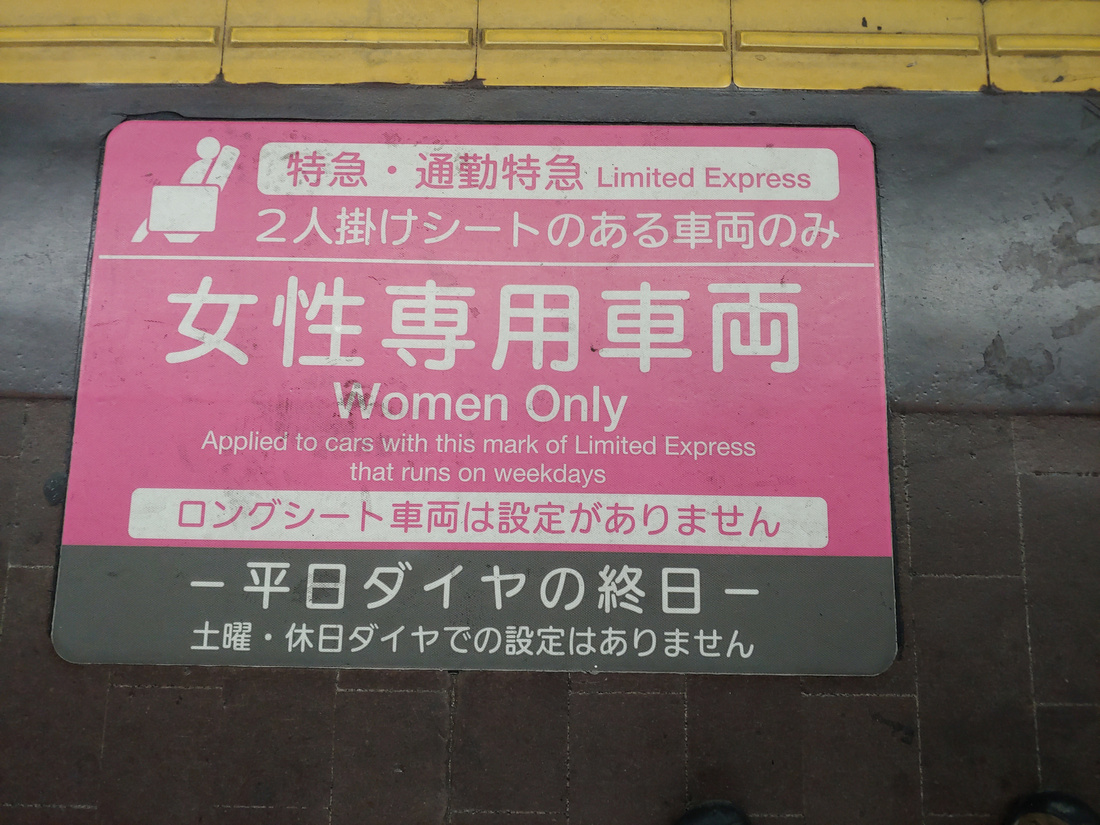 Tomorrow we take another Shinkansen train to Hiroshima where we will visit the memorial to the victims of the bombing.  I have heard that it is very moving and I am looking forward to seeing it.  Plus, it will be a bit cooler there than Kyoto has been!  Until next time... 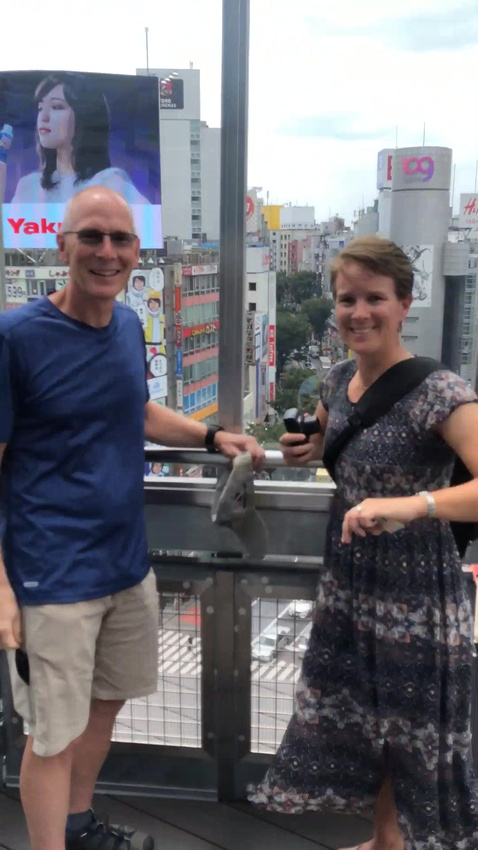 Barry and I overlooking Shibuya Crossing in Tokyo

Barry and I overlooking the Shibuya Crossing