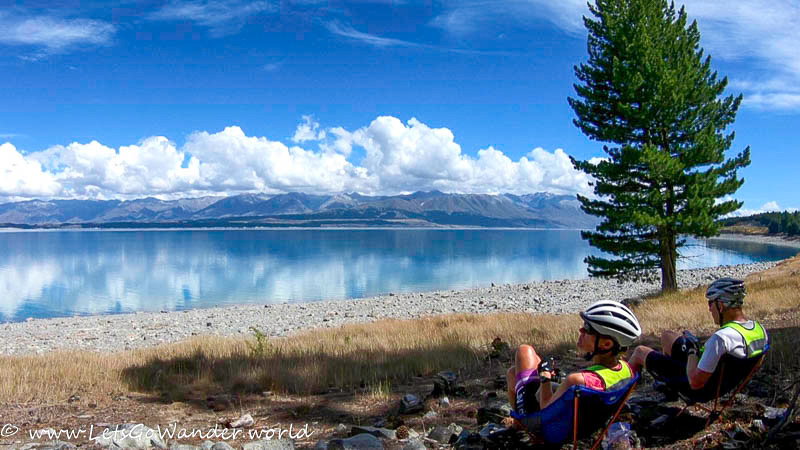 It turns out that (almost) the entire population of New Zealand goes on vacation the two weeks after Christmas.  Suddenly we found ourselves struggling to find accommodation along our route.  While passing through Lake Tekapo, we got one of the last tent sites available at the holiday park which turned out to be the size of a postage stamp, but we were happy to have it.  There were several bike tourists staying at the campground including Scott who happened to be from Grandby, Colorado; a young couple from France who were pulling their 1 year old in a trailer; and a woman in her early twenties from Germany who was touring by herself. 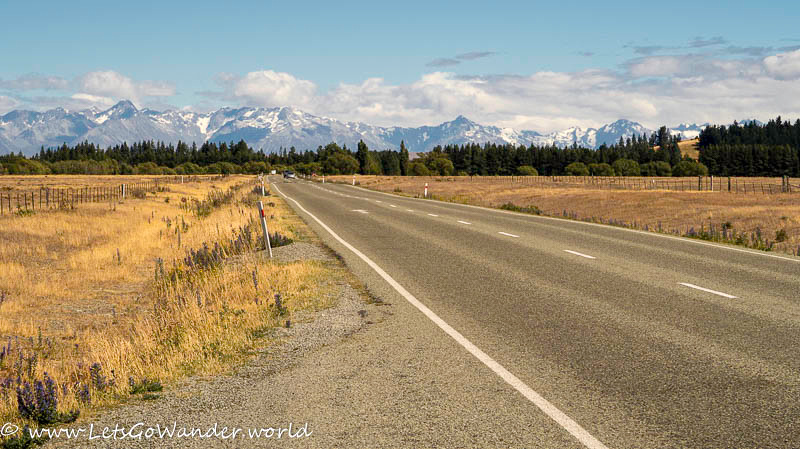 A view of the Remarkables in the distance

A view of the Remarkables mountain range in the distance

Camping near us was a young Japanese couple that clearly had expected to find accommodations in town when they arrived but they ended up at the campground with their huge suitcases and no camping gear.  The town was over-run with people, all of the cafes had lines out the door, and at the end of the day all of the ready-to-eat food was gone from the shelves at the grocery store. 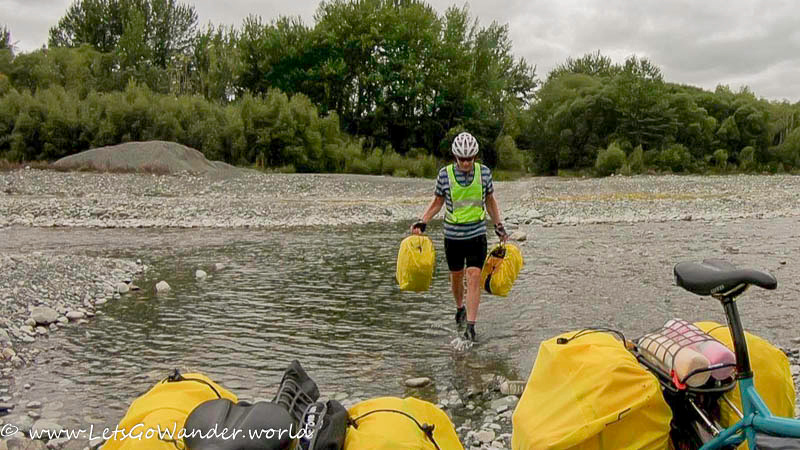 I have found that the eastern side of the south island looks a lot like Colorado in many ways.  The area around Christchurch looks a lot like the dry rolling eastern plains, the stretch between Fairlie and Tekapo reminded me of the arid mountainous landscape of South Park, and parts of the Central Otago Rail Trail resemble the western slope with its rock outcroppings.  And of course the weather that changes every five minutes is somewhat familiar too. 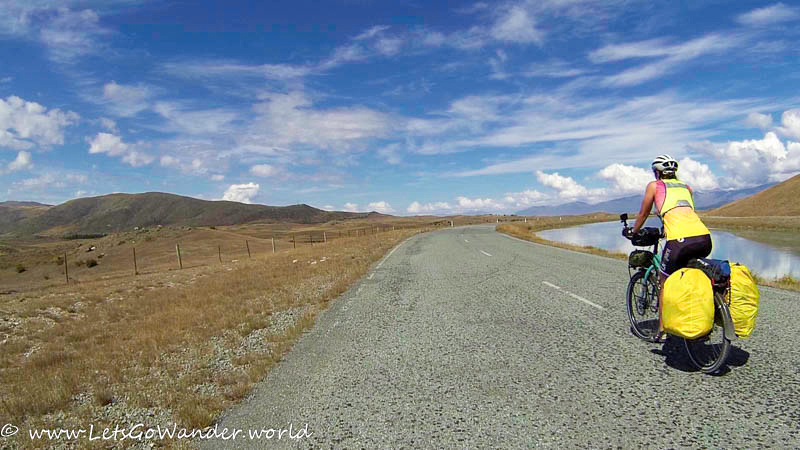 The Canal Road Outside of Lake Tekapo

Riding along the delightfully deserted Canal Road out of Tekapo

While New Zealand does not have any defined routes around the islands for bike touring, there are a number of bike trails throughout the country which provide a nice opportunity to get off the roads and enjoy some different scenery. 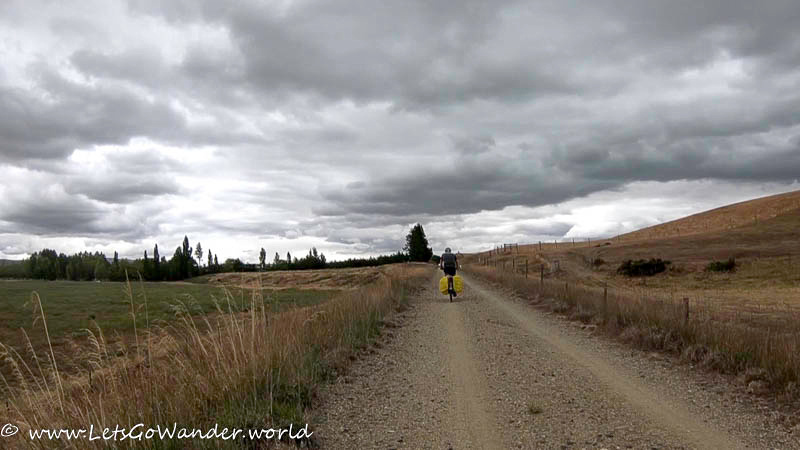 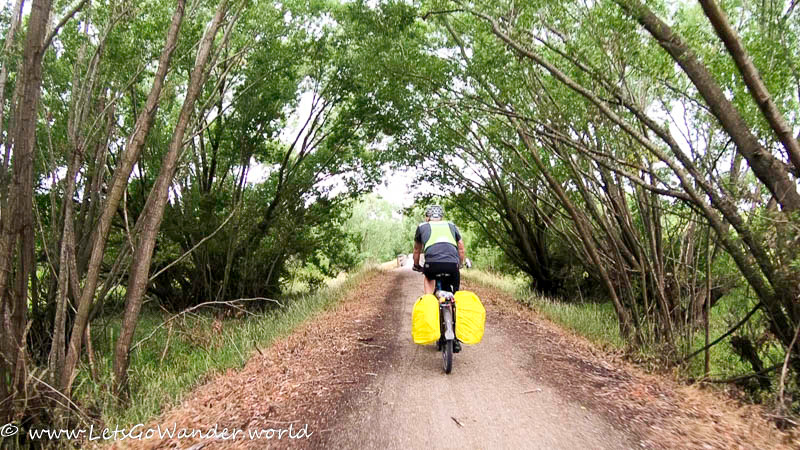 Along the Otago Central Rail Trail

Many of these trails are gravel and better suited to mountain bikes that aren't loaded down with gear, but some of them are still do-able with our bikes.  We rode part of the Alps to Ocean trail along Lake Pukaki and we also rode the entire length of Otago Central Rail Trail which is an old abandoned rail way which has been converted to a trail. 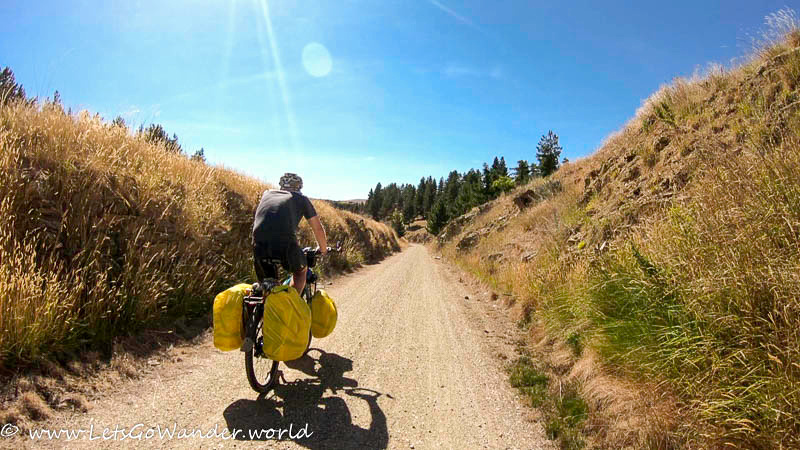 Along the Otago Central Rail Trail 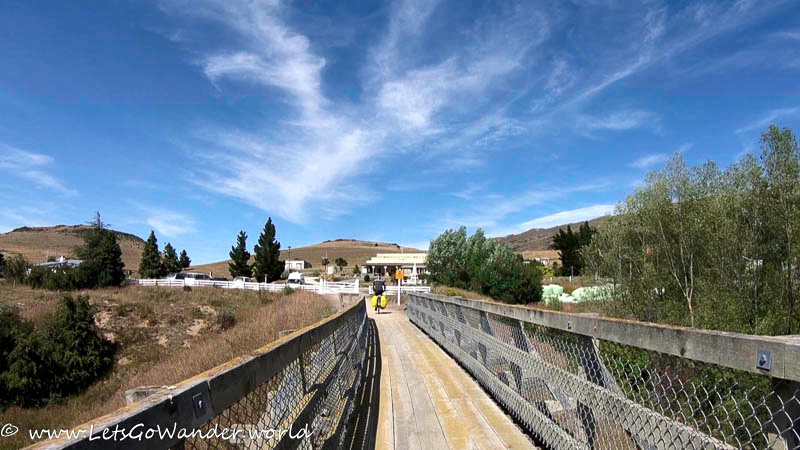 Along the Otago Central Rail Trail near Hyde

A bridge near Hyde on the Otago Central Rail Trail

We did this trail over the course of three days and then took a train through the Taieri Gorge (along the part of the rail way that is still intact) into Dunedin.  The trail took us through some very remote and rural areas that were very scenic and enjoyable.  The second day on the trail turned out to be quite windy - for the second time on this trip I got blown off my bike by a strong cross-wind gust which only resulted in a little cussing and swearing on my part. 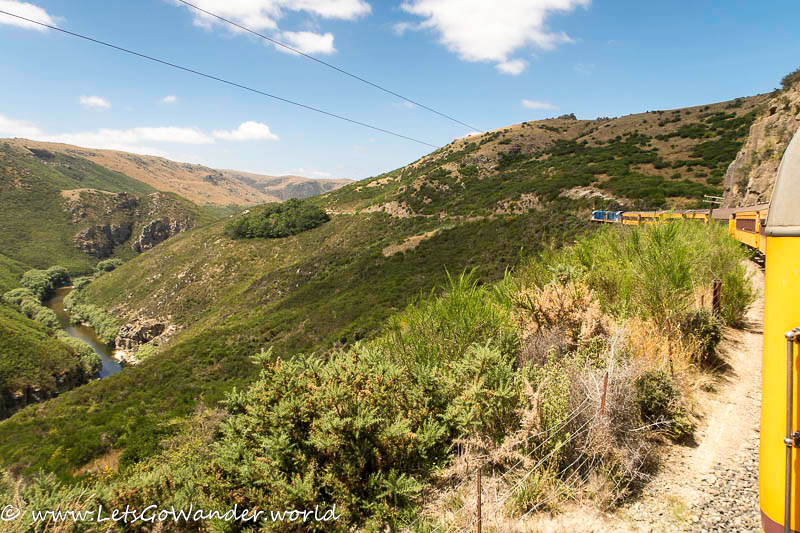 Train ride through the Tairei Gorge to Dunedin

Once in Dunedin, we signed up for a wildlife tour of the Otago Peninsula.  While the peninsula is relatively close to Dunedin, much of it is quite remote and wild and there are some spectacular views of rolling hills, rocky coastlines and deserted beaches. 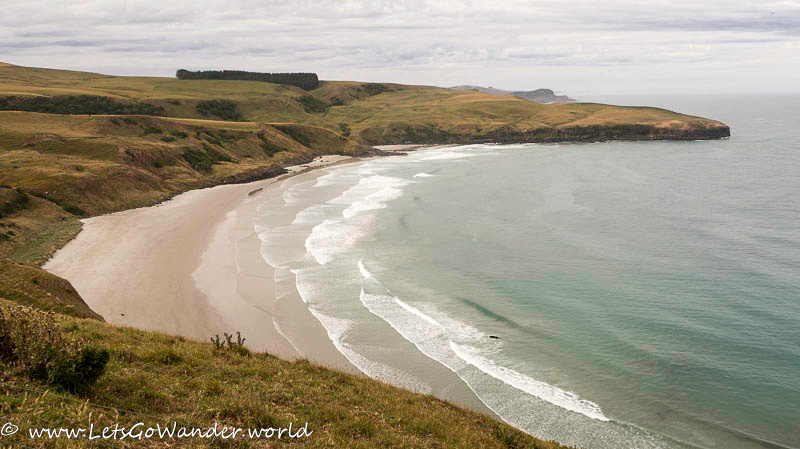 Remote beach on the Otago Peninsula

A deserted beach on the Otago peninsula

One of the extraordinary things about New Zealand is that it is home to a large number of bird species and about 70% of them are endemic to the country.  New Zealand did not originally have any land dwelling mammals, so as predatory mammals were introduced to the country by humans, they have had a negative impact on many of the native bird species. 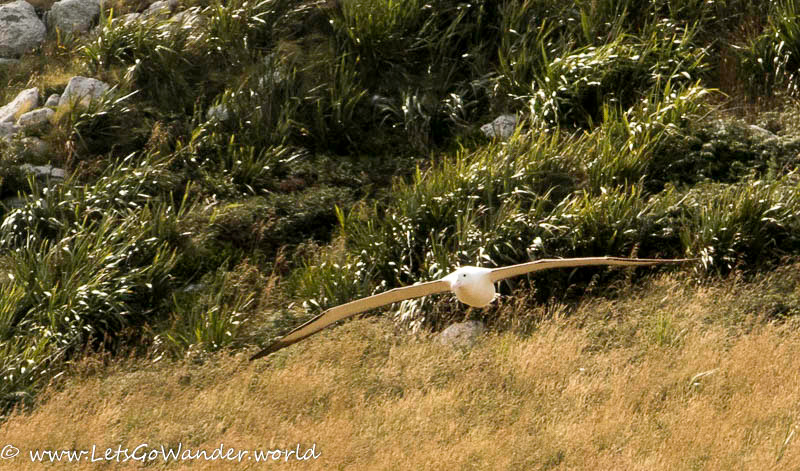 Albatross on the Otago Peninsula

The wingspan of the Royal Albatross is about 10 feet

The Otago Peninsula is home to the only breeding colony for Royal Albatross on the mainland.  The nesting area is protected, but in the late afternoon you can watch the birds ride the wind up the cliffs from the ocean and circle around before landing.  After seeing the Albatross colony, we drove over to another part of the peninsula to see fur seals, sea lions and yellow eyed penguins. 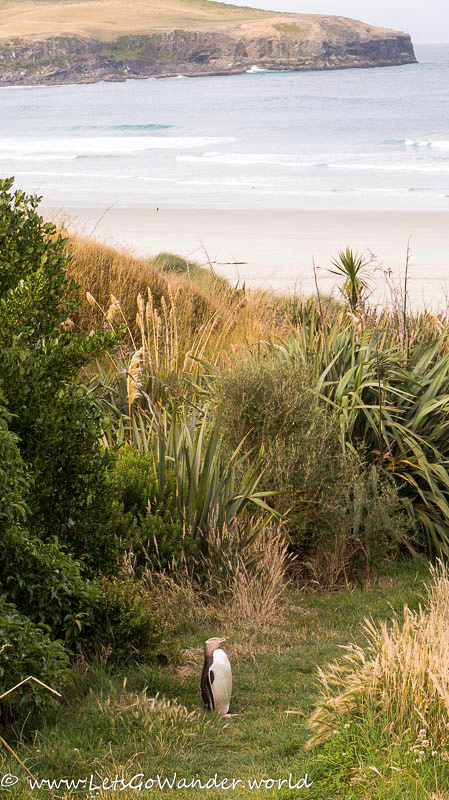 Yellow-Eyed Penguin on the Otago Peninsula 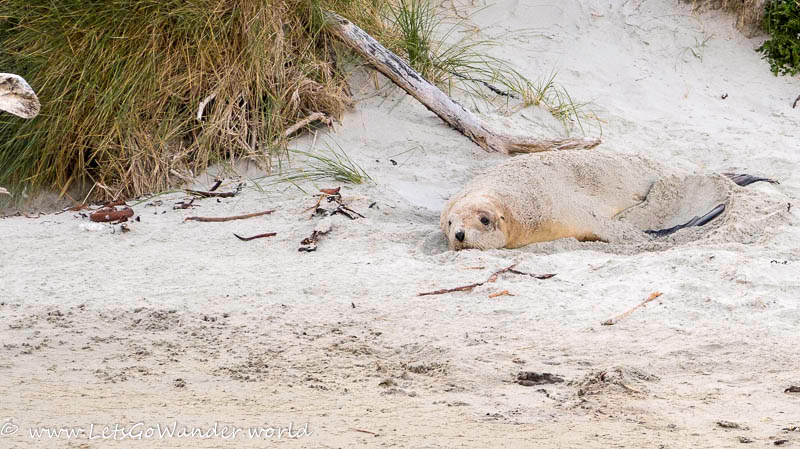 A juvenile sea lion covers himself with sand to dry off

The yellow eyed penguins are unique because they are forest-dwelling penguins so at the end of the day, they emerge from the ocean, waddle their way across the beach, and head up into the bush for the night.  About 20 years ago, there were about 9000 yellow-eyed penguins and now there are only about 2000.  Despite conservation efforts, the species is heading towards extinction due to predators and shrinking habitats. 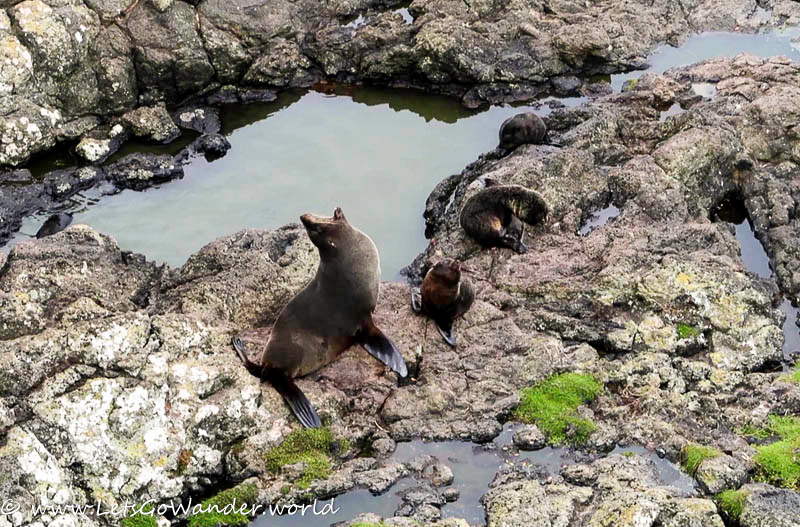 Fur seals with their pups on the Otago peninsula

A fur seal and some 2 month old pups

With revenues from their tours, the eco-tourism company that we went with lease coastal lands from local farmers to provide protected areas for the penguins which also provided a great opportunity for us to observe them. 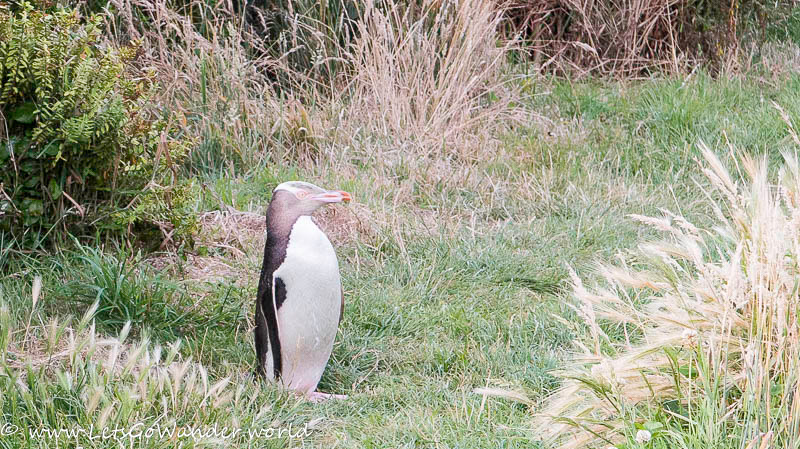 Yellow-Eyed Penguin on the Otago Peninsula

Tomorrow we are headed south again, headed towards Invercargill and the very south end of the island.  The areas coming up promise to be very picturesque so I am looking forward to it.

Rebecca Fawcett(non-registered)
Why...Why...WHY did you not get a video of you getting blown off your bike. I mean really...that would have made your blog even MORE enjoyable than it already is! And trust me, I LOVE reading about your adventure but being blown off your bike? Hilarious!!! :-)
Michael McLaughlin(non-registered)
Michael McLaughlin
I love your work Megan enjoy reading about your trip thanks!!
No comments posted.
Loading...