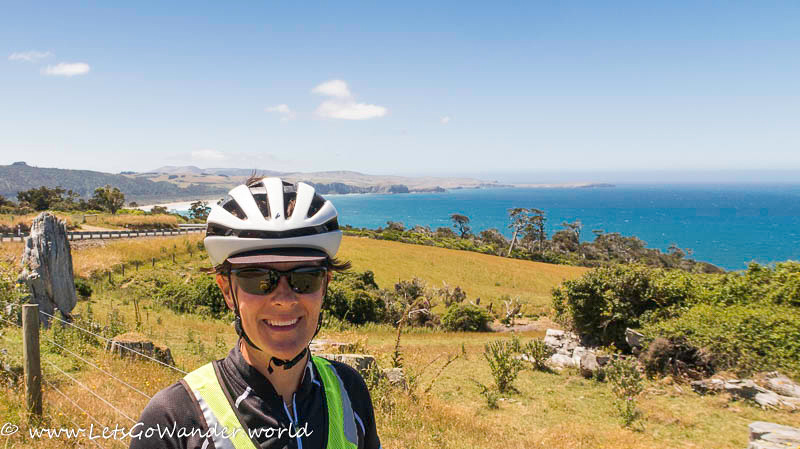 At a rest stop in the Catlins

At a rest point along the road in the Catlins

Many Kiwis will tell you that the south island is the "real New Zealand."  There are many beautiful areas on both islands, but I see their point.  The southern end of the south island has an incredible amount of geographical diversity - from rolling plains to wetlands to rainforests to fjords to endless sandy beaches. 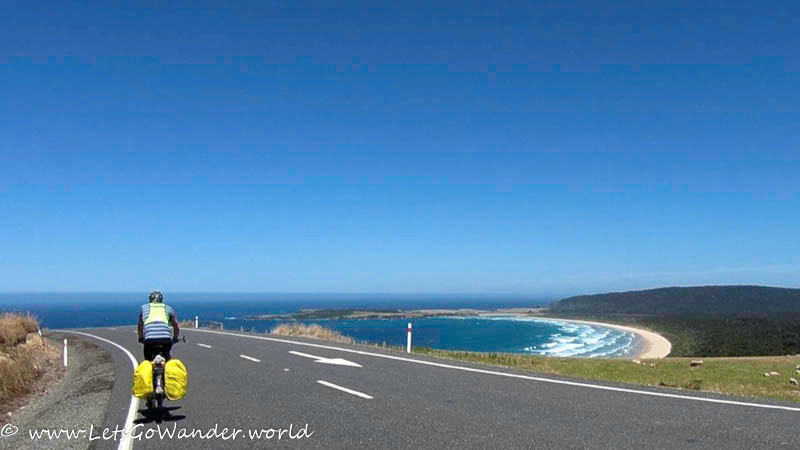 On our way out of Dunedin, we hooked up with the Southern Scenic Route which took us around the southern end of the island, through the Catlins, Invercargill and up to Te Anau.  Much of this route is a bit off the beaten path for tourists, so it was relatively quiet. 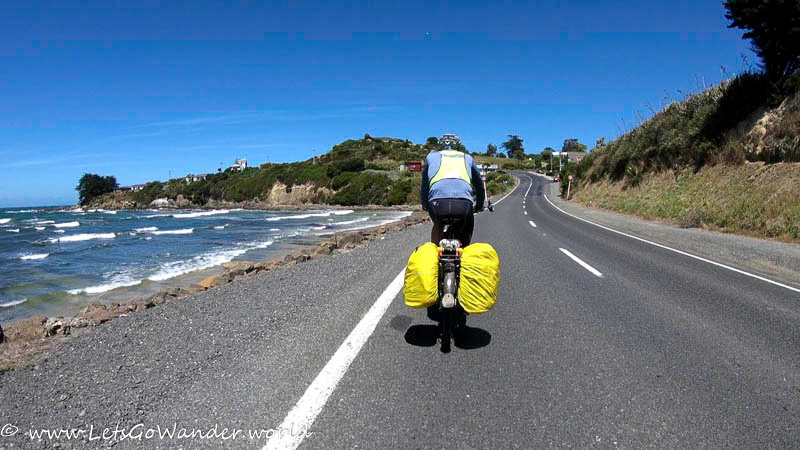 The Catlins is a rugged and sparsely populated area with rocky coastlines, stunning beaches and native forests.  A couple of days outside of Dunedin, we stayed in a tiny beach town called Kaka Point where the winds were blowing like crazy. 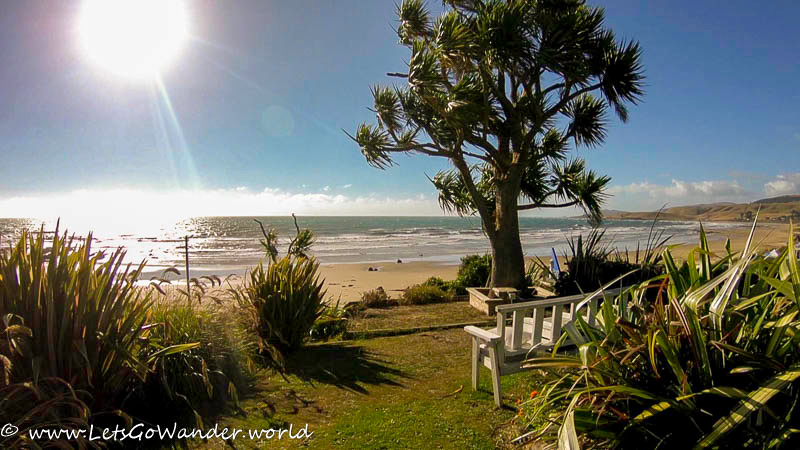 View from our place in Kaka Point

The view from our place in Kaka Point

Our host had a couple of self-contained units that she rented out in her house and she was very kind to offer two complete strangers that rolled into town on bicycles to use her car to visit the Nugget Point lighthouse several miles further along the coast (not that we couldn't have ridden our bikes there, but given the winds and the steep hill to get there we wouldn't have).  As it turned out, I am quite happy that we visited Nugget Point - it's one of the iconic spots of the area that I have since seen featured in videos and advertisements about the area. 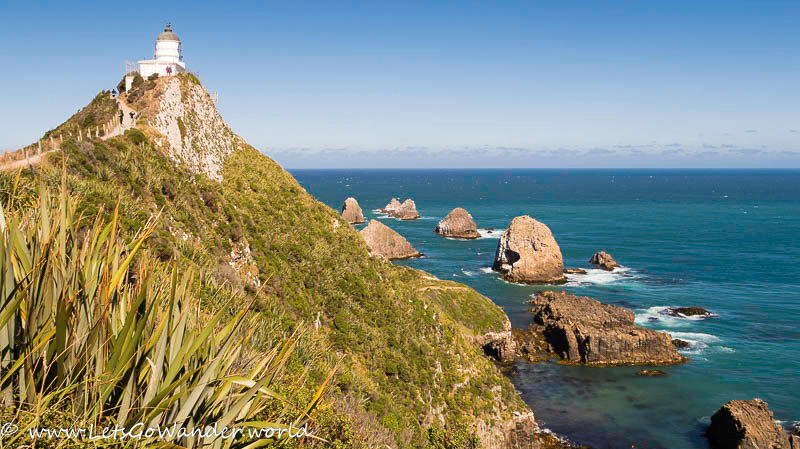 Another highlight from the Catlins was Cathedral Cave.  It was about a 5-mile round trip hike from where we were staying (no friendly stranger offered up their car this time) and a visit to the cave has to be timed around low tide because at other times the caves are inaccessible. 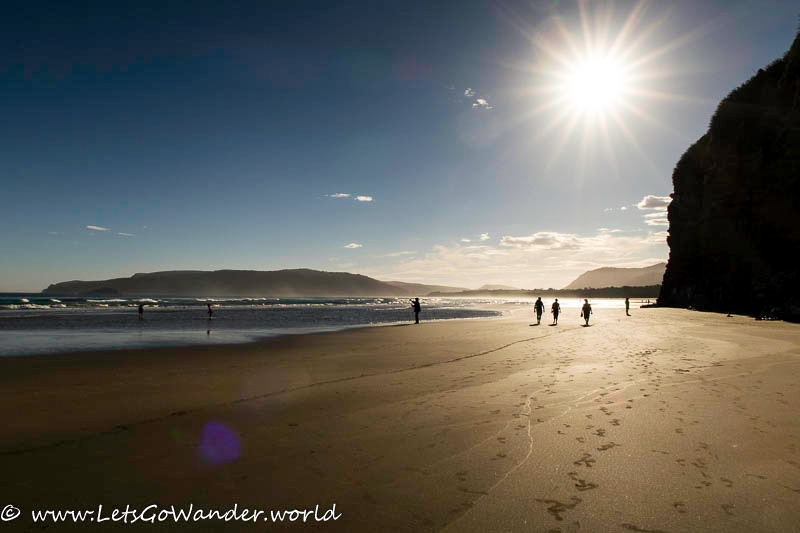 The beach at Cathedral Cave

As you walk along a wide expansive beach, you come across several huge openings which appear to be separate caves but in reality they are all interconnected caves that have been carved out by the ocean.  It's possible to explore the whole network of caves if you are feeling adventurous (and you have a flashlight and sufficient time). 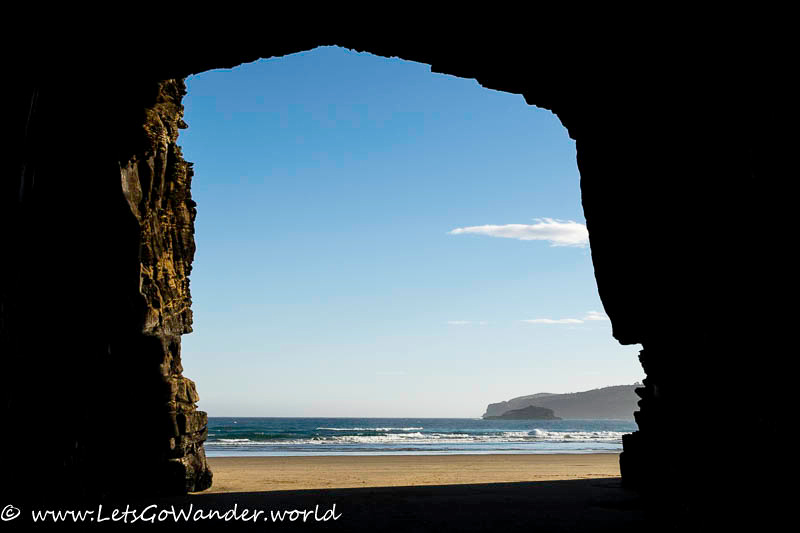 One of the cave openings at Cathedral Cave

Southern New Zealand has been in a drought and our visit coincided with some of the highest temperatures ever recorded in the area.  This was one of those days where I felt like my skin was on fire by the end of the day - not sunburned mind you, just baked to a crisp.  We were lucky to stay at a guest cottage on a large farm located on the southern coast. 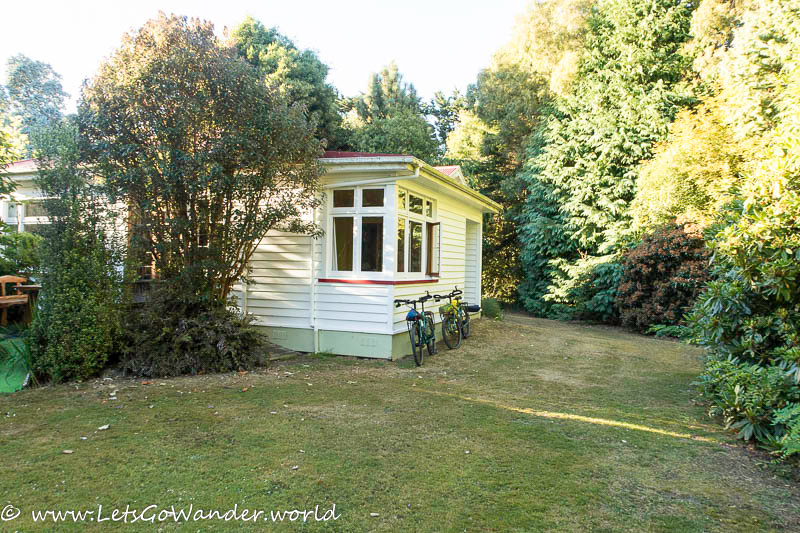 Garden Cottage - Home for a night

The Garden Cottage was built in the 1930’s and moved from a nearby village to Christine and Colin’s farm about 30 years ago.

Our hosts, Christine and Colin, were having a nice beach day with their family and were kind to include us.  All that was required on our part was to sit in the shade and watch the dolphins surf the incoming waves.  It was the perfect thing to do on such a hot day.  Later, Christine and Colin invited us to have dinner with them as well which was a treat.  The large farm has been in Colin's family since the mid 1800's when his ancestors came over from Scotland by boat (not that they had a lot of other transportation options at the time).  Although all beaches in New Zealand are technically open to the public, this one is only accessible through their land or by boat so we had the place to ourselves. 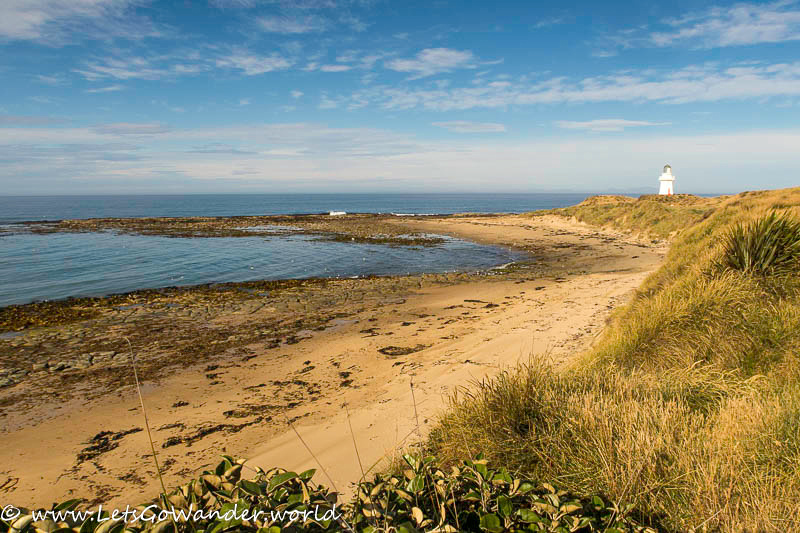 The next morning, Christine drove us to Waipapa Point which is one of her favorite spots.  I can see why.

Once we reached Invercargill, we booked a day trip to Stewart Island which is off the southern coast.  There is a small town on Stewart Island with some permanent residents, but most of the scenic island is accessible only by hiking trails. 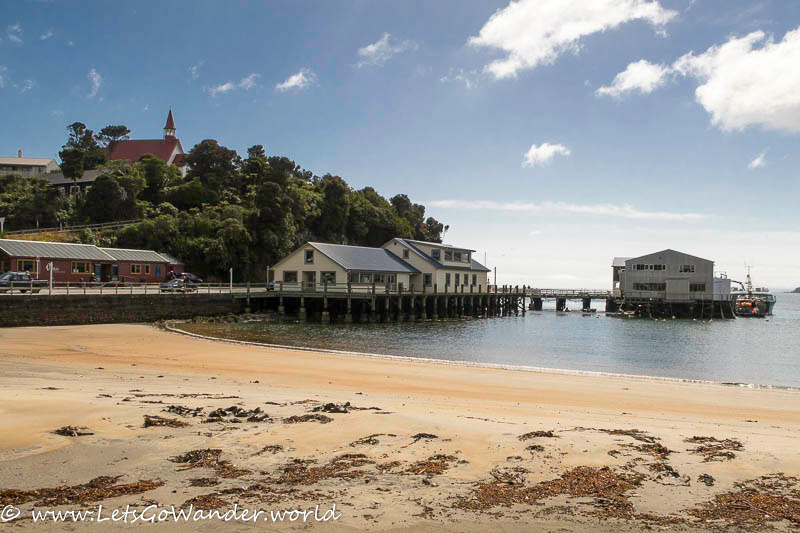 The harbor at Oban, Stewart Island

Our morning flight was canceled due to heavy fog, so we ended up going over to the island by ferry and coming back later in the afternoon by airplane once the fog had cleared.  After arriving on Stewart Island, we took another ferry to the small island of Ulva which is a sanctuary for many native New Zealand bird species.  The birds of New Zealand are one of the country's best assets and on this beautiful island we spotted about 8 species including the New Zealand parakeet and the Stewart Island weka. 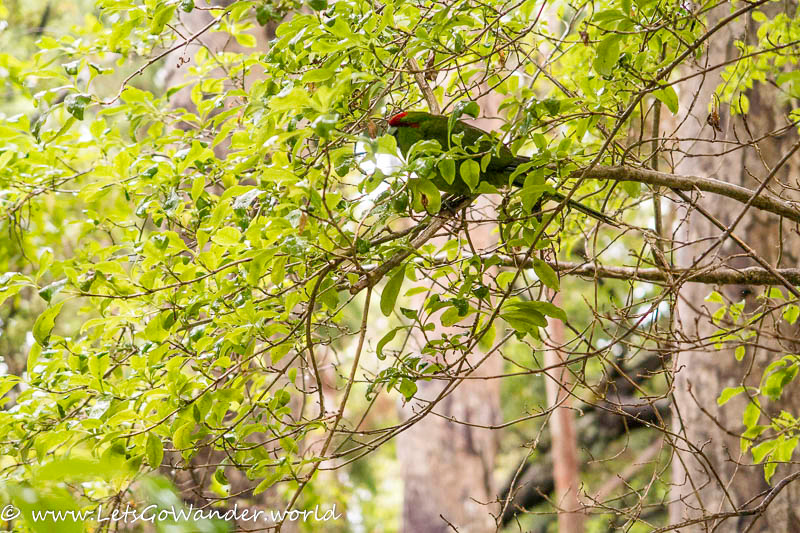 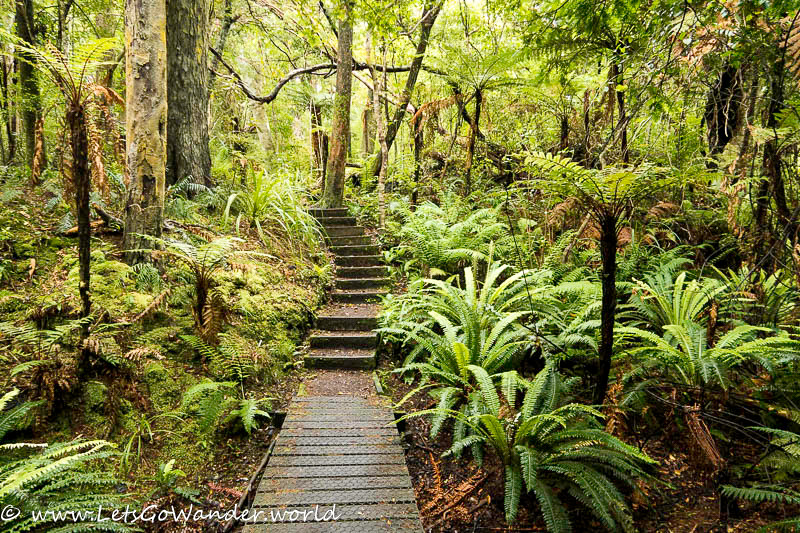 Looking for birds on Ulva Island

After leaving Invercargill, our route started to take us into more mountainous terrain until we reached Te Anau which is a small resort town perched on the side of the New Zealand’s second largest lake. 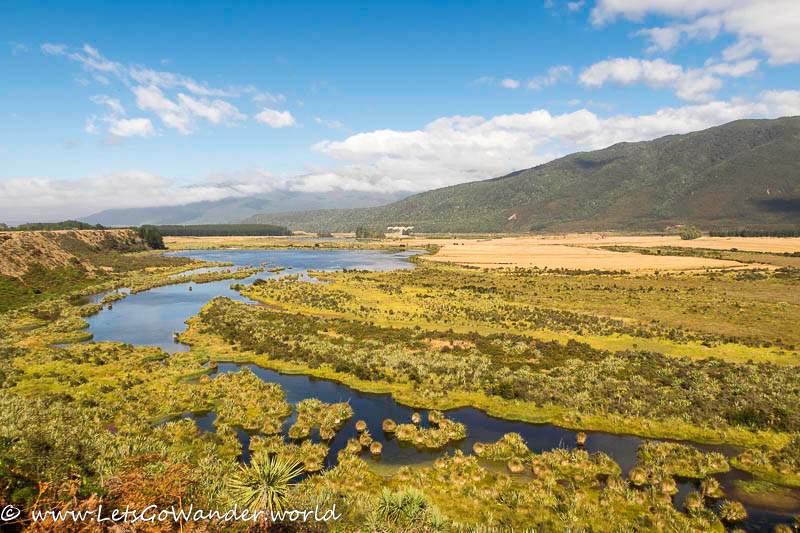 Overlooking a wetlands area along the Southern Scenic Route

Te Anau is known as the gateway to the beautiful Fiordland National Park which we visited on a full day tour to Milford Sound.  We were very lucky to visit on a day after it had rained heavily the night before (resulting in many temporary waterfalls that dry up within a day) and the sun even made an appearance for us.  The Fiordland National Park tends to get overshadowed by Milford Sound, but it covers an enormous area and would be a wonderful place to explore in more depth. 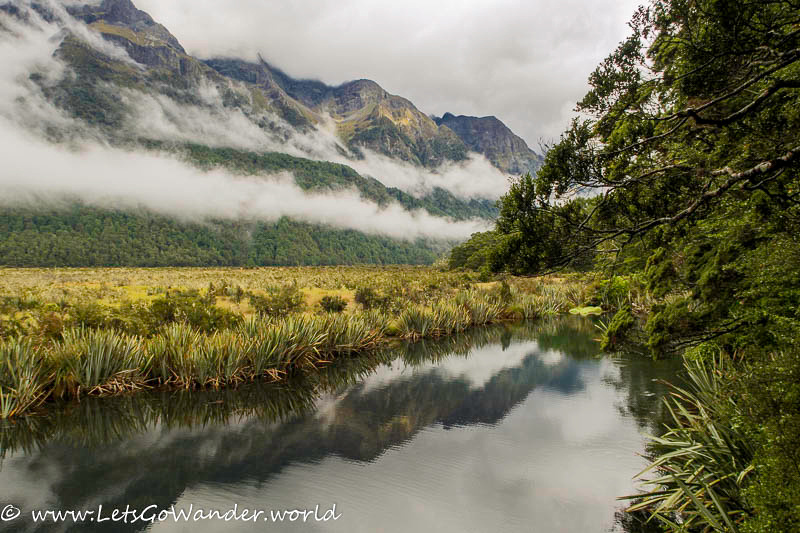 Milford Sound (which we learned is actually a fjord) is the most accessible of the of the southern fjords as it is reachable by road.  Driving in on that road is an experience in itself – the road goes through a tunnel which was bored through a mountain at a 10% grade.  I read that when they were boring the tunnel and it would rain heavily, the water would pool in the western end of the tunnel until they were able to punch through to the other side.  Given that it rains somewhere around 7 meters per year there, I can only imagine what a headache that would have been. 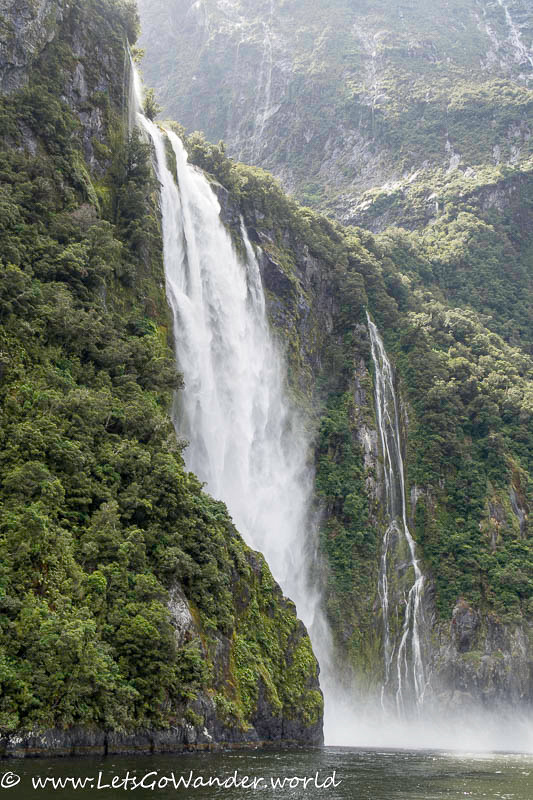 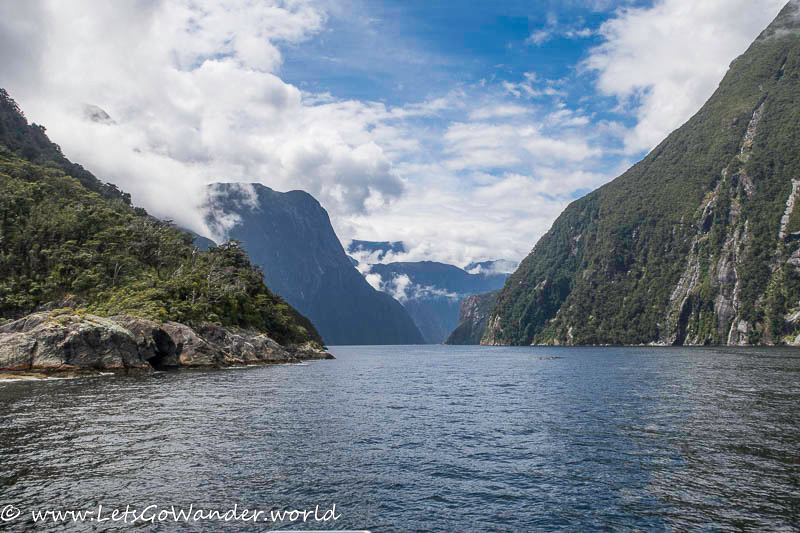 The opening of Milford Sound from the Tasman Sea

Given the potentially heavy traffic on that road as well as the challenging terrain, I would imagine that most bike tourists get to Milford Sound the way that we did – by bus.  However, we did pass one lonely guy with his bike fully loaded pushing his pedals at a snail’s pace up that steep road headed out of Milford Sound.  I’ll bet riding up that steep, dark tunnel was fun for him (um, no thanks). 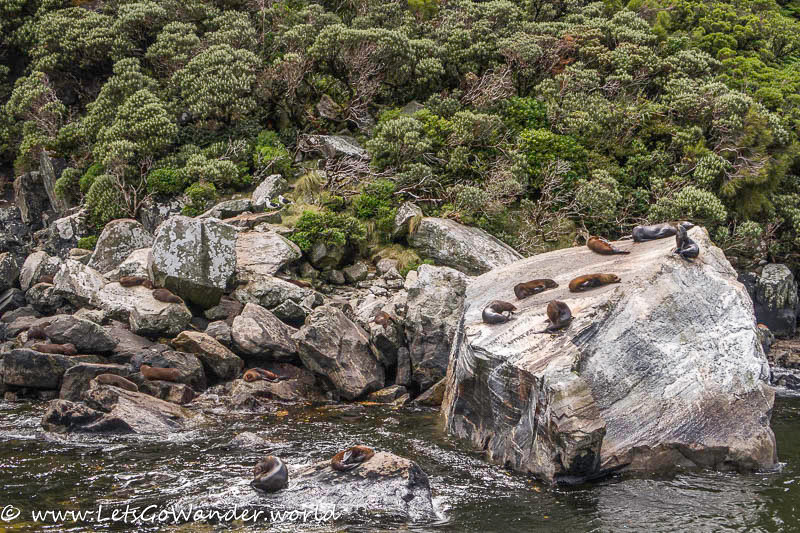 Seals hanging out in Milford Sound

Our next major stop is Queenstown which should be both beautiful and over-run with tourists.  Queenstown is something of an adrenalin junkie’s wonderland, but I think we’ll skip the bungee jumping and sky diving for now. 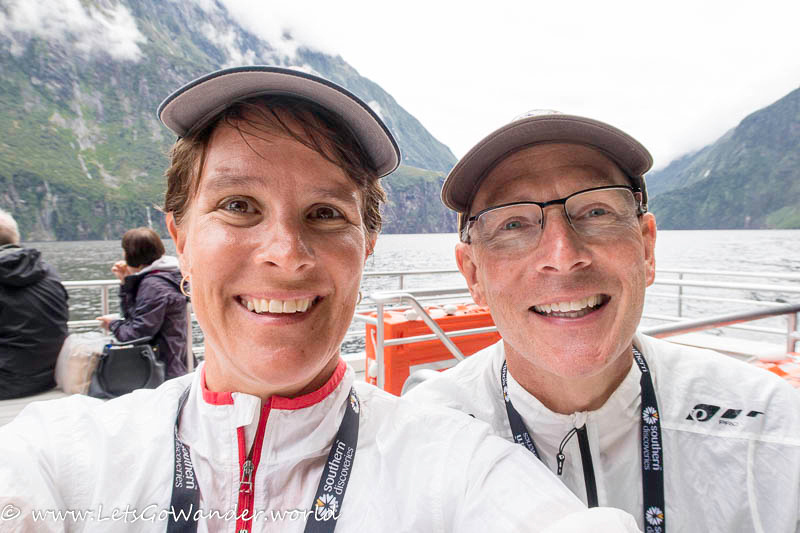 Megan and Barry at Milford Sound

Megan and Barry on a day cruise on Milford Sound

Dad(non-registered)
Impressive photographs!! The lighting looks like it is different than Colorado. You both look healthy!
No comments posted.
Loading...