New Zealand: Sleeping in a Pub is More Comfortable Than it Sounds 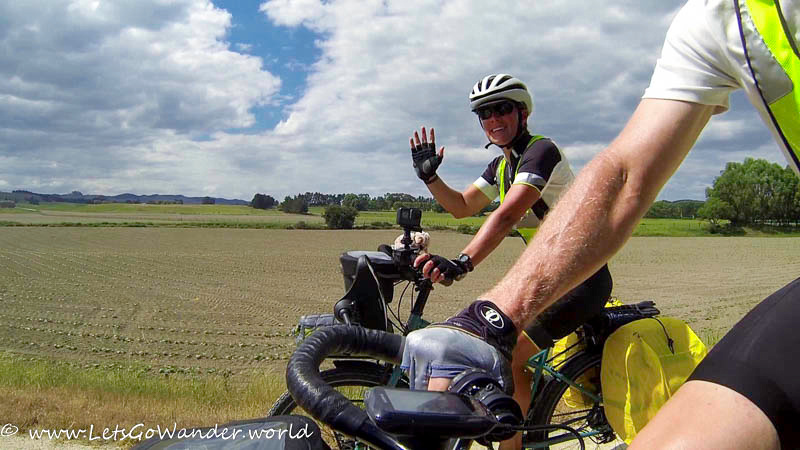 Riding the Trail in Hawke's Bay

Riding the Trail in Hawke's Bay

After leaving Rotorua, we decided to make a change to our planned course and head south instead of heading to the east cape.  I had been reluctant to go to Taupo because I thought it was a rather large city, but when I realized that it is actually a small city within an easy 2 day ride of Rotorua, we decided to make the trip.  Accommodations between Rotorua and Taupo are quite limited, so we ended up staying at a pub half way.  In New Zealand, many pubs (especially in small towns or rural areas) offer accommodation.  These are often simple and budget friendly options popular with backpackers.  This one was OK.  It was a tiny room, barely bigger than the bed itself and there was a common bathroom and common kitchen although we were the only ones staying there that night.  Probably the best things about it were that it had a built in place to eat (the pub) and it had a surprisingly comfortable bed. 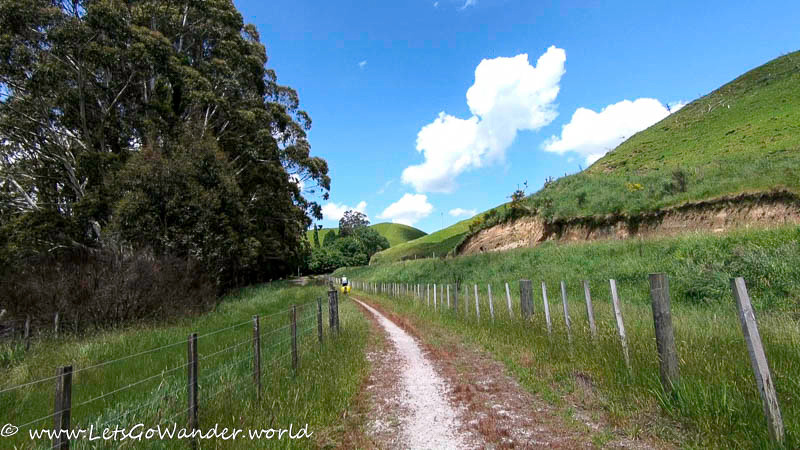 On the trail from Rotorua to Taupo

On the Trail from Rotorua to Taupo

After arriving at the pub, we were sitting outside enjoying an ice cream when a couple of cycle tourists pulled up.  Although we had seen a couple sets of cycle tourists while in Rotorua, these were the first ones that we had a chance to talk to.  They had been in New Zealand for a couple of weeks, traveling the north island the opposite direction as us, and we were the first cycle tourists they had seen in NZ as well.  They were into their 9th month of cycle touring and had already visited South America, Poland, Lithuania, Russia, Japan, South Korea, and now New Zealand (their blog is here in case you are interested).  They looked to be in their late 20's or early 30's and they both looked quite fresh even though by my calculations they had just ridden about 40 miles in very warm weather (I never look fresh after riding 40 miles in any weather).  They were a delight to talk to and gave us some good tips on road conditions and traffic to the south where they had come from.  They also showed us some maps that they had recently acquired which had a terrific level of detail that would be very helpful in our route planning. 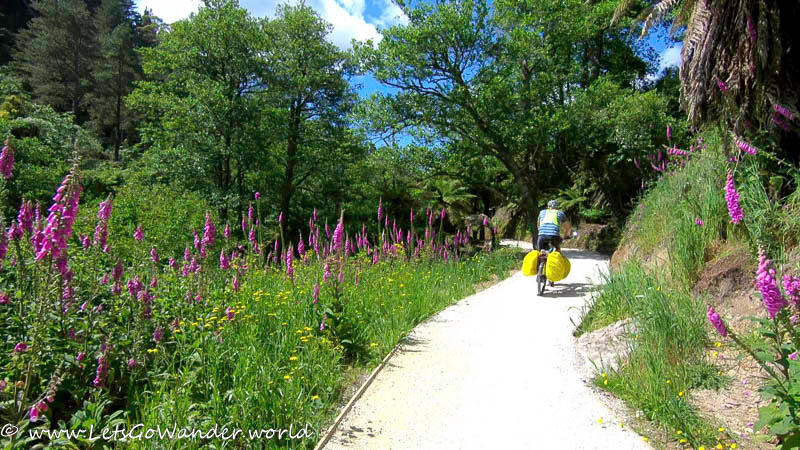 Also on the trail from Rotorua to Taupo

Also on the Trail from Rotorua to Taupo

Every once in a while on these trips, we get really lucky with our accommodations.  Taupo was one of those places.  I found a last minute deal on an apartment hotel for a 1 bedroom apartment for NZ$125 per night (about US$86).  When we checked in, we were upgraded to a 2-bedroom unit which turned out to be a huge 2 level townhouse with a balcony and a view of the lake from the master bedroom.  Some things you just can't pass up, so we decided to stay 3 nights.  Ironically, the difference in cost between this place and the room in the pub was only about US$30 per night - worth every penny!  Taupo is located on the shores of an enormous lake with views of Mt. Ruapehu which is a snow-capped volcano where one can ski in the winter.  It is my favorite city so far in New Zealand. 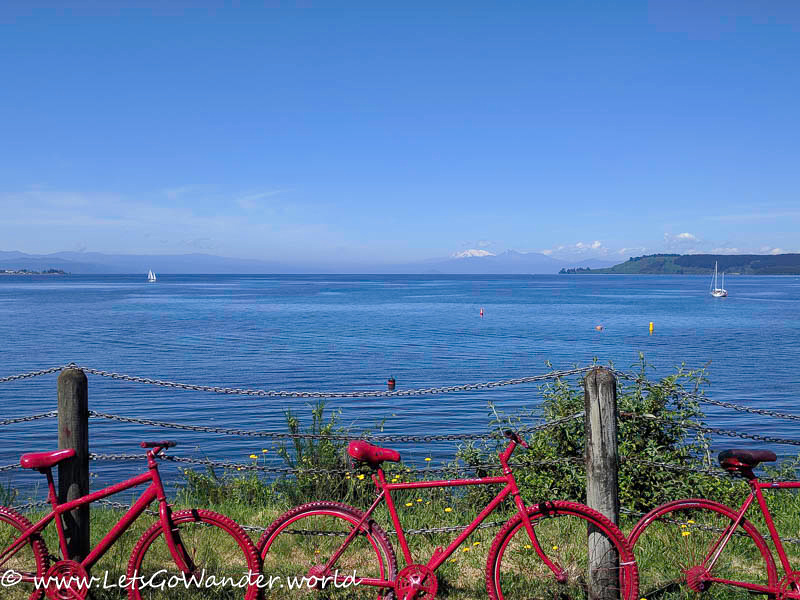 Lake Taupo with Mt. Ruapehu in the Background

Lake Taupo with Mt. Ruapehu in the Background

We also decided to sign up for a hike that Barry had done 20 years ago and remembered to be very scenic.  After we were booked, Barry informed me that it was a 12 mile hike that we had just committed to for the following morning.  I gotta say, 12 miles was a bit longer than I was really up for, but what the heck... The Tongariro National Park is a World Heritage site and the hike - the Tongariro Crossing - turned out to be a great hike with epic views of the 3 surrounding volcanoes and the countryside.  There were considerably more hikers than 20 years ago of course.  If there is one thing that will guarantee crowds of people, it is the World Heritage designation.  But, the hikers spread out along the trail as we hiked along so it was not so crowded. 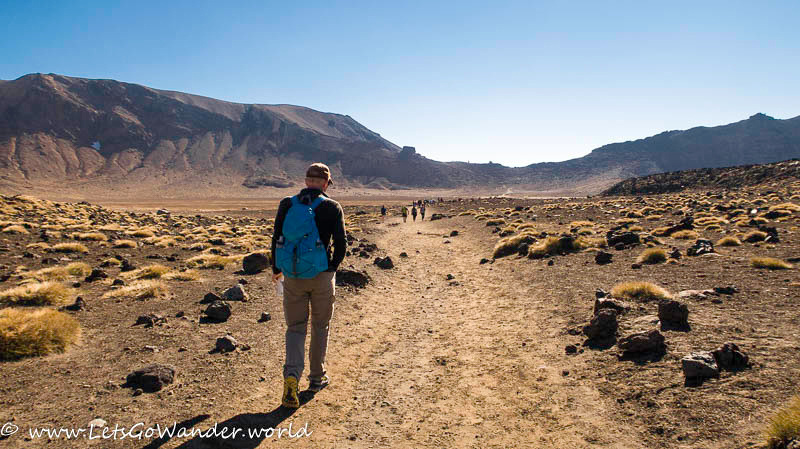 Barry on the Tongariro Crossing

Barry on the Tongariro Crossing

After the 6 hour hike, my legs were jello-like and I was thankful that we still had another day in Taupo to relax a bit.  We also had a bit of a problem to figure out before we left Taupo.  In order to go south from Taupo, we had to choose from 2 very difficult and busy highways.  After talking to the two cycle tourists, I wasn't feeling great about either option, so the next day we had to figure out what to do next.  We headed out to the local tourist office to check out our options and to the local AA office (like AAA in the US) to see if we could get some of those detailed maps. 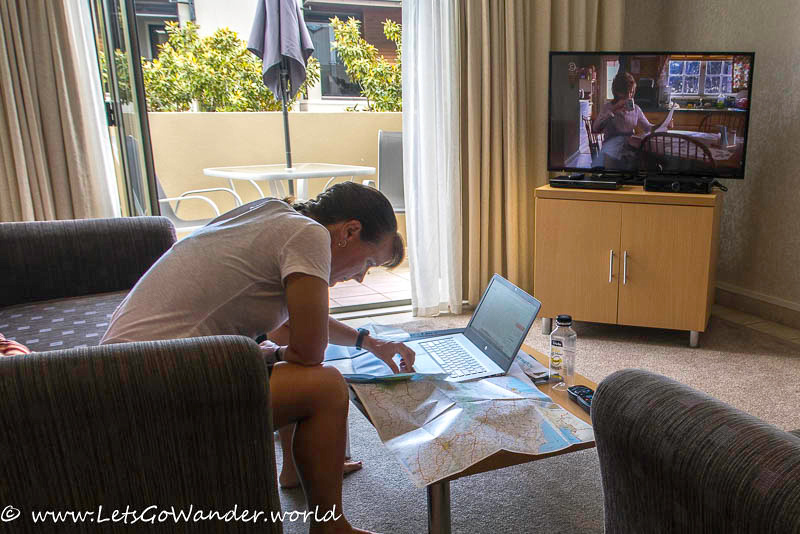 Route Planning in our Spacious Apartment in Taupo

Ultimately, we ended up booking seats on a bus to Napier from Taupo.  The bikes can go on the bus if the driver says he has room, so there was no guarantee ahead of time that it would work out.  Luckily, everything worked as planned and we had a comfortable ride to Napier.  We saw a couple of cycle tourists braving the busy highway as we wooshed past them in the bus.  I really felt for them.  The road was narrow, winding, and quite steep in places with very little along the way in terms of stores, restaurants or accommodations.  I was quite happy with our decision to take the bus.

Now we are on our bikes again, heading south with the aim of reaching Christchurch on the south island for Christmas.