Living on the Cheap?

Tip: In order to see captions for the photos, hover your mouse over the photo. Well, it's been quiet on the blogging front lately.  I hope you all are looking forward to 2017.  I know I am!  As I write this, I am watching it snow outside.  It's been doing that a lot up here in the mountains these last couple of months and we are ready for some warmer weather.  So, we are packing up to head out on our next adventure tomorrow - a road trip down to Cabo San Lucas, Mexico where we will be staying and playing for a while.  More to come on that later...

Recently I found myself chatting to a man in his mid-50's who was sitting next to me on a flight back to Denver.  Actually, he was doing most of the chatting and I was listening as he told me about his recent travels, upcoming holiday plans, and - inevitably - his job.  He was one of those gregarious people with a voice that carries above the din, so I can only assume that everyone around us heard at least his half of the conversation.  About 30 minutes prior to landing, he got around to asking me what I did for a living, which was actually the first time someone had directly asked me that question since I retired last May (unless you count the people we met along our Europe bike tour that asked us incredulously [and mostly rhetorically] what jobs we could possibly have that allowed us to spend the better part of 6 months on a bicycle). I smiled and stalled a bit, and then I said, "Well, actually my husband and I retired about 7 months ago."

Oh wait, I didn't say that last part.  What I did say, rather lamely, was something along the lines of "we manage to live cheaply," after which he quickly lost interest in favor of something extremely fascinating on his phone.

Reflecting back on that conversation, I couldn't help chastising myself for such a lame answer.  He was probably envisioning us living in a shack somewhere, darning our own socks and splitting 2-ply toilet paper to make it last longer.

The "what do you do for a living?" question is something I should have been more prepared for, and yet I'm still kind of at a loss about how to answer it in a way that conveys my enthusiasm for what we are doing and how we are doing it. In order to retire early, we knew that we were willing to give up some things, like having a gardener and a housekeeper.  We knew we would need to cut back the hours of the personal chef.  Just kidding, we didn't have any of those.

But seriously, we knew there would some "sacrifices" to be made.  We were willing to forgo luxury cars, give up a hotel star or two when traveling, and cook more at home over eating out or ordering in.  But in reality, many of our spending patterns have evolved over the years to divert more of our income to savings.  We spend less on clothing, gadgets, subscriptions, services, and "stuff" in general than we used to. Summit county before the snow machine turned on.

We sold our primary house and use our second home (which is a small two bedroom condo) as our home base now.  It's smaller, cheaper and easier to maintain.  And, we don't have to worry about it when we're not there.

As a result of these changes, we currently live on about 25% of our pre-retirement income and yet we only had to cut back on our day-to-day spending by about 16%.  Having trouble with that math?  Well, here's how it breaks down.

Of that 25% that represents our current spending, some things we spend less on than we did previously (we now share one car and our utility bills are MUCH lower than they were when we had our house) and some things we spend more on than we did previously (like health insurance and traveling).  We also maintain plenty of flexibility in our budget by having as few fixed expenses as possible so that we can adapt when things don't go as planned. 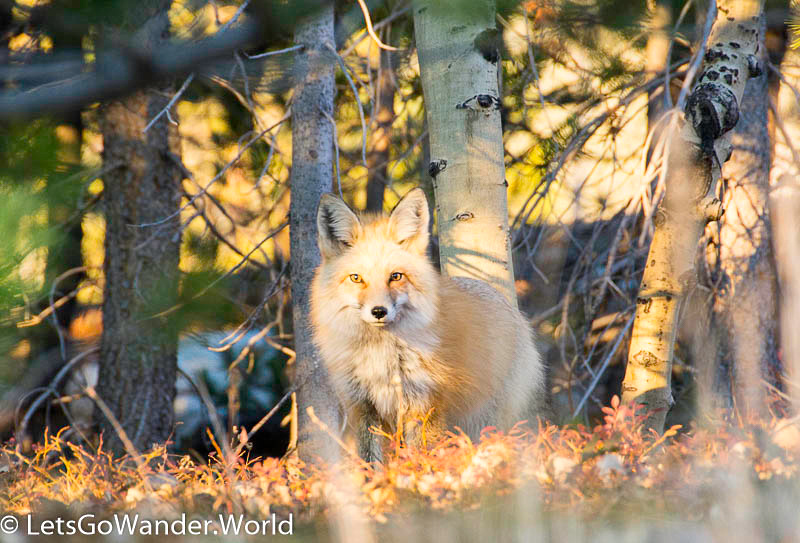 Cute little fox near our condo

Also, for the first several years our tax savings will actually be even greater than what is represented here since we are living off of savings that we have already paid taxes on.  We won't dig into our 401(k)'s or IRA's at least until we turn 59½.

So, for us there were two factors that allowed us to retire early.  Cutting expenses and sticking to a budget is definitely an important one because we don't want to go running out of money after 10 years.  But another (related) factor is designing our lives around doing the things that we want to do and eliminating those things that aren't serving that purpose - like a big house with lots of upkeep for instance.  So far, it's all worth it.  Our time is our own and we look forward to filling it with more traveling, more cycling, and more adventure!