Tip: In order to see captions for the photos, hover your mouse over the photo.

We set off from Colorado in the midst of a snow storm on a Monday morning, taking a route south along highway 285.  We got a few funny looks driving with our bikes on top of the car through the snow and the drive was a little dicey at first.  But once we hit Buena Vista, the roads cleared up and it was smooth sailing all the way to down through New Mexico. 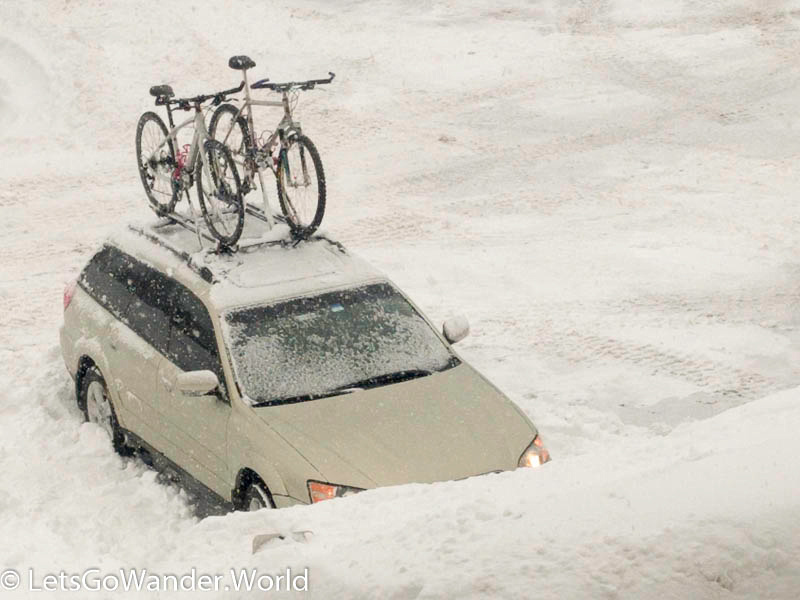 All ready to go – cue the snowstorm. 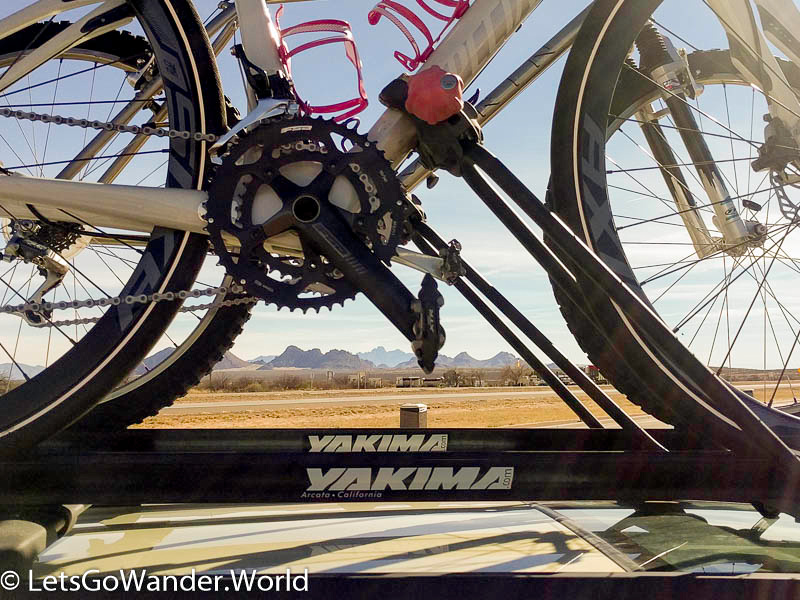 Somewhere along the way… New Mexico maybe? The bikes stay upright despite the 60 MPH crosswinds.

We stayed overnight in Albuquerque and Tucson and crossed the border at Tecate. This was my first time driving across a US border and I was prepared for a long line and lots of bureaucracy, but instead we pulled up to a gate, a light turned green and the arm went up, and then we pulled through and were in Mexico.  As we started to pull away, Barry said, "Is that it?  What about our passports?  Don't we need some paperwork?"  We actually did need some paperwork.  So, we drove around the block a few times looking for a place to park so that we could walk back across the border and get it right this time. 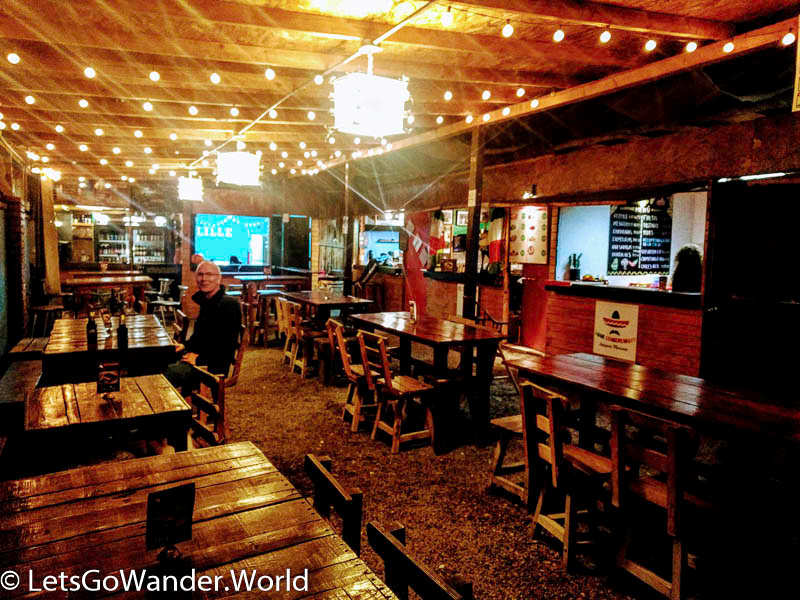 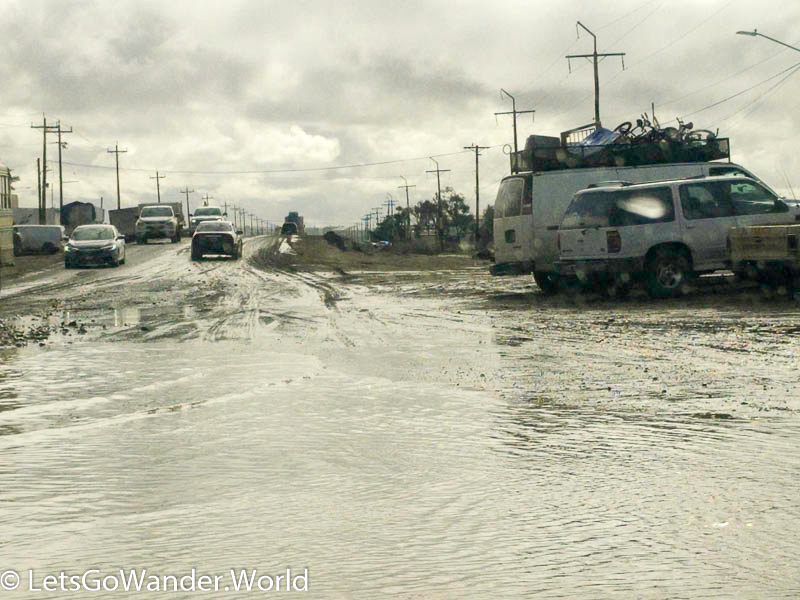 Tiny little puddle outside of Ensenada

Mexico has made it very easy for Americans to travel in the Baja peninsula and other parts of northern Mexico, so depending on where you are going you don't need a stamp in your passport, or an immigration form, or an import permit to bring your car in.  However, to go as far south as Cabo San Lucas, we did need the immigration form which we easily obtained and were on our way.  As we've experienced in the past, no one was interested in seeing Cisco's paperwork. 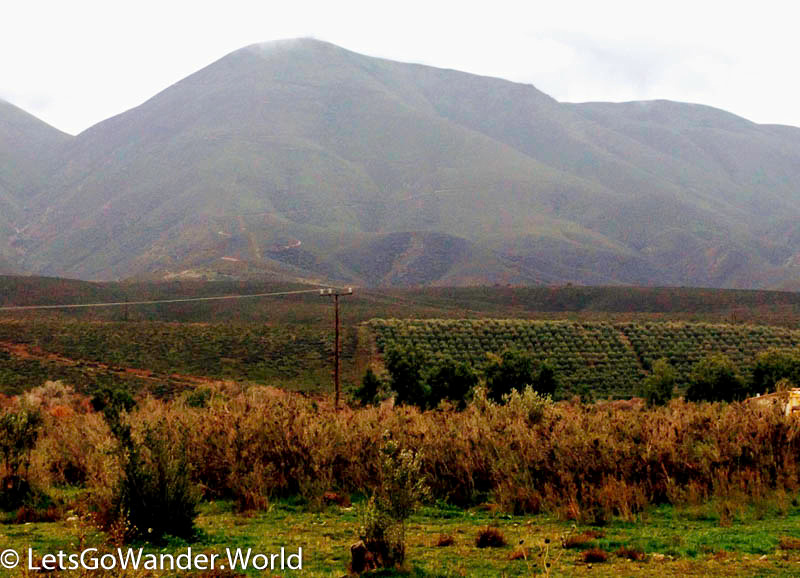 Unfortunately this was the only decent shot I got of Valle de Guadalupe in between downpours.

Highway 3 between Tecate and Ensenada passes through Valle de Guadelupe and is known as "La Ruta del Vino" or "The Wine Route."  I'd like to say that we purposely planned our trip to go through this beautiful region of northern Mexico, with its growing number of vineyards and wineries, but in truth it was just a happy accident.  I confess that I didn't really know that Mexico had much of a wine industry, but this area is becoming quite well-known for producing excellent wines and for its budding wine tourism.  I'd like to go back some day for a longer stay.  Click here for a write-up on visiting the area. 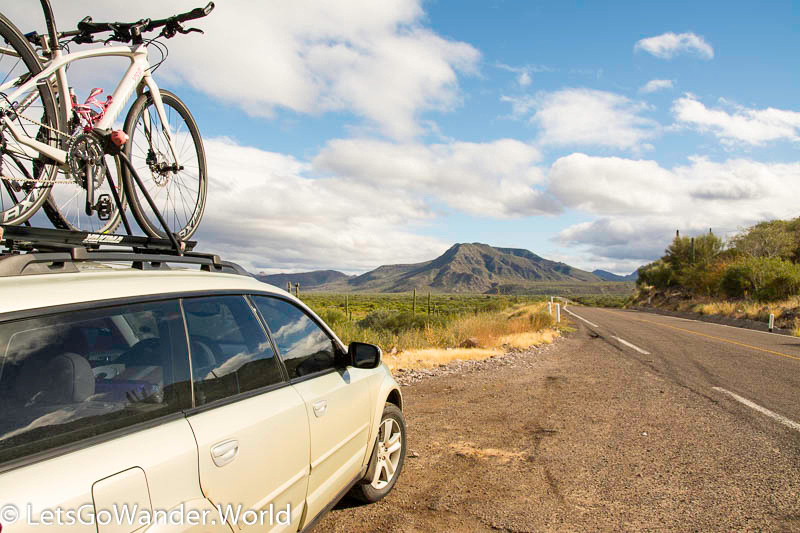 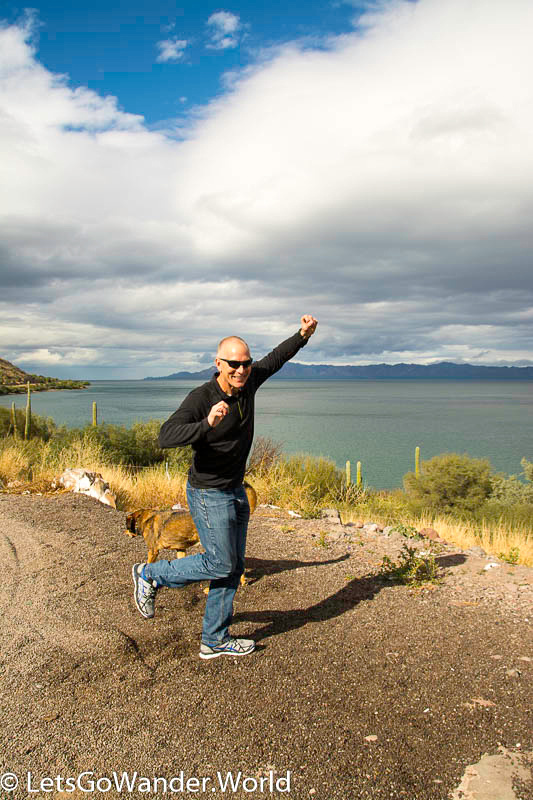 We stayed overnight in Ensenada at a decent little bed and breakfast run by a Canadian couple who had escaped the cold weather.  They assured us that the weather in Ensenada was perfect - usually sunny and always ranging between 60 and 85 degrees Farenheit.  However, the temperature at the time was in the 50s and rainy.  In fact, judging from the enormous puddles around town, it was evident that it had been raining a lot.  It turns out that the northern half of the Baja peninsula has been getting the same treatment as California this winter with unusually copious amounts of rain. 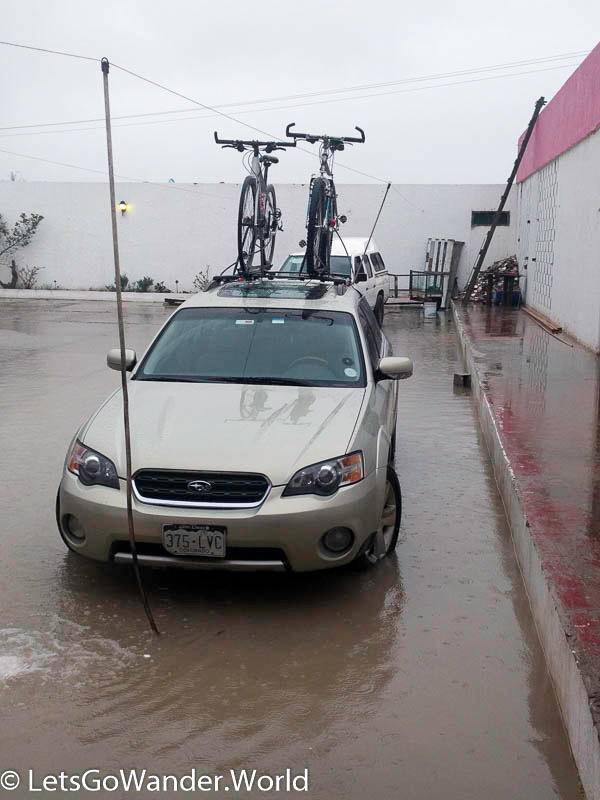 The parking lot at the hotel in Guerrero Negro is filling up with water – time to go! 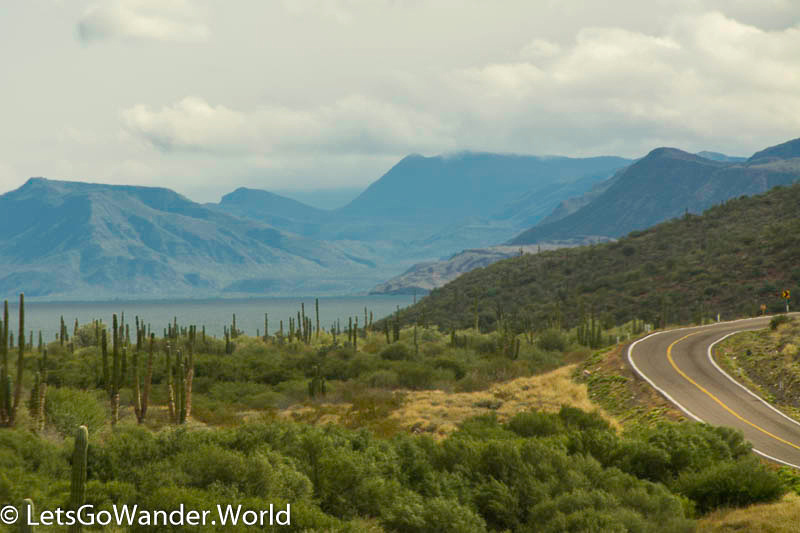 In Ensenada, we joined up with highway 1 - "El Carretera Transpeninsular" which is the principal highway running the length of Baja.  This highway is in the midst of various construction projects along its entire length aimed at widening it and adding bridges over low spots called vados, but much of the highway is still a narrow two-lane road with no shoulders. 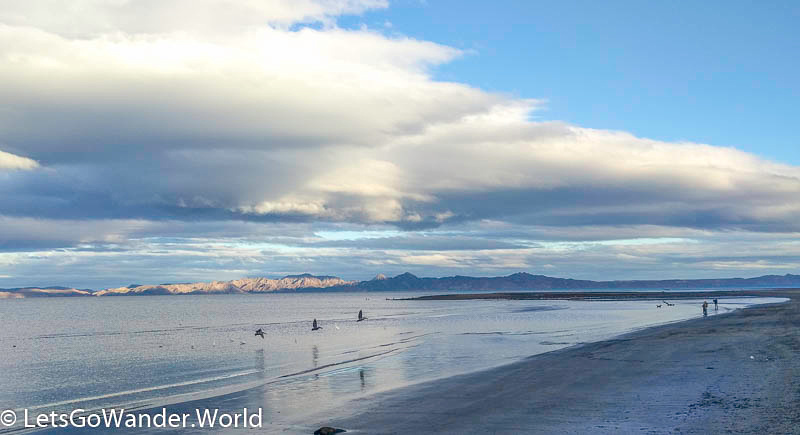 The beach at Loreto just before sunset 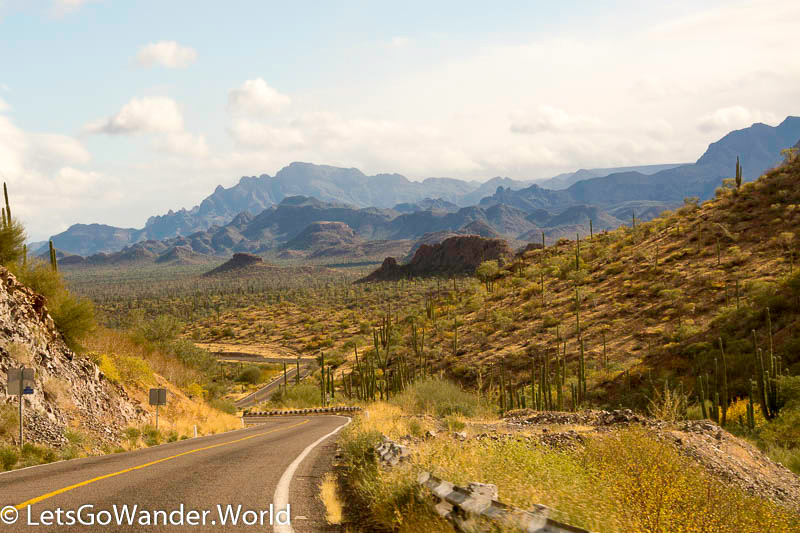 More spectacular scenery along the way

As a rule, we decided to fill up the gas tank every time we dipped below 3/4 of a tank just to be on the safe side.  It seemed like overkill at the time, but as it turned out it was a good move.  We filled up in a town called Rancho Los Pinos and passed by the next gas station in El Rosario since we had barely used an eighth of a tank by then.  Little did we know, that would be the last gas station that we would see for almost the entire day.  After about an hour, we saw some guy on the side of the road selling gasoline out of the back of his pick-up truck.  We laughed, and kept going.  We weren't that desperate... yet. 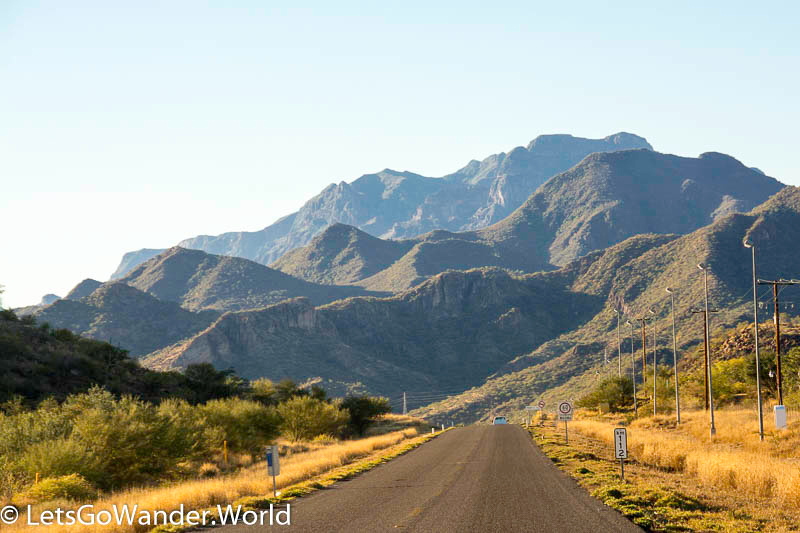 Several hours later, we started doing the math on whether we could make it to our destination for the night on our remaining gas.  Our best guess was "maybe."  When we passed another guy selling gasoline out of the back of his pick-up truck followed by a sign indicating the next station was another 90 kilometers ahead (we sure could have used a sign like that at the last gas station!), we made a U-turn and purchased 20 liters of gas for the bargain price of 380 pesos (just about 5.25 gallons for USD $18). 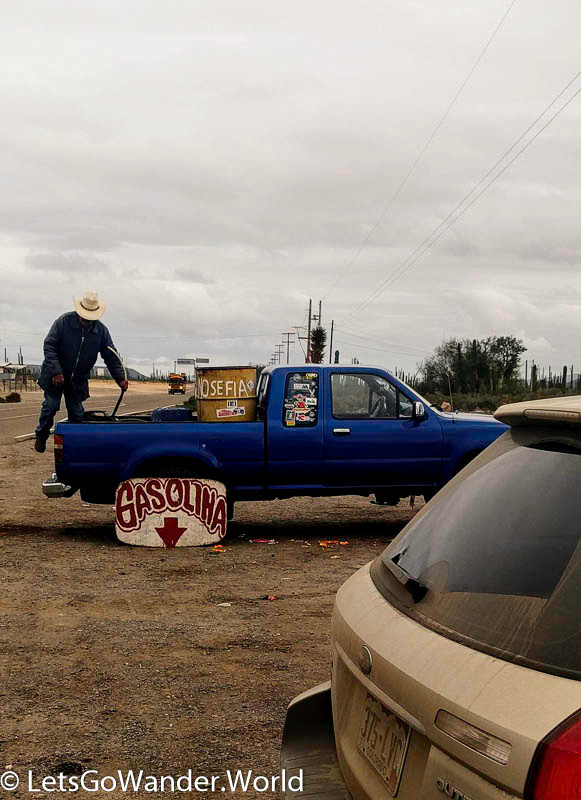 Filling up at the pick-up truck

Driving down Baja is not the time and place to day dream as you leisurely drive down the highway.  Although there is not a lot of traffic on the road, it is full of blind hills followed by blind corners and, in some areas numerous potholes as well.  Add to this that many Mexicans drive like race-car-driver-wanna-be’s and you have a recipe for fun! 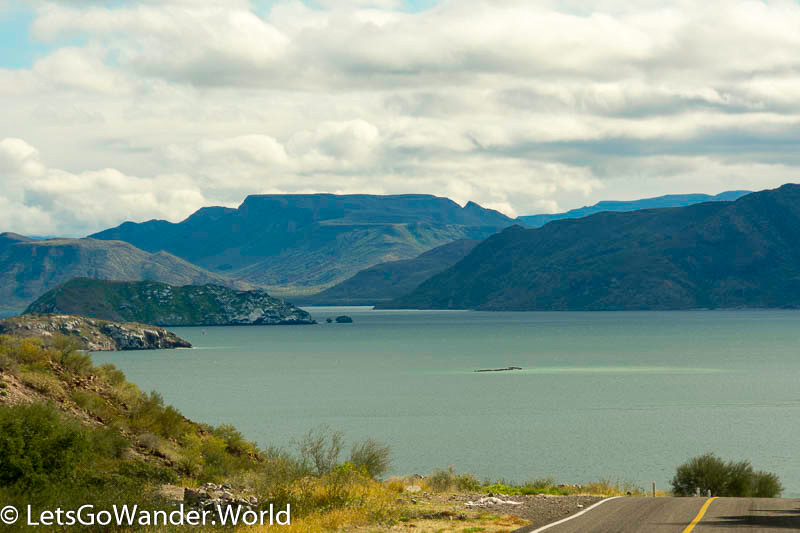 In many areas, the road is narrow enough that I found myself holding my breath when a truck passed us going the other direction.  On one side, you have a semi-truck barreling toward you and on the other side the road drops off several inches, so if you over-correct to either side you are headed for certain disaster.  Judging from the number of roadside memorials, wrecked guard rails, and skid marks leaving the road surface, I would say that the highway has seen its share of disasters. 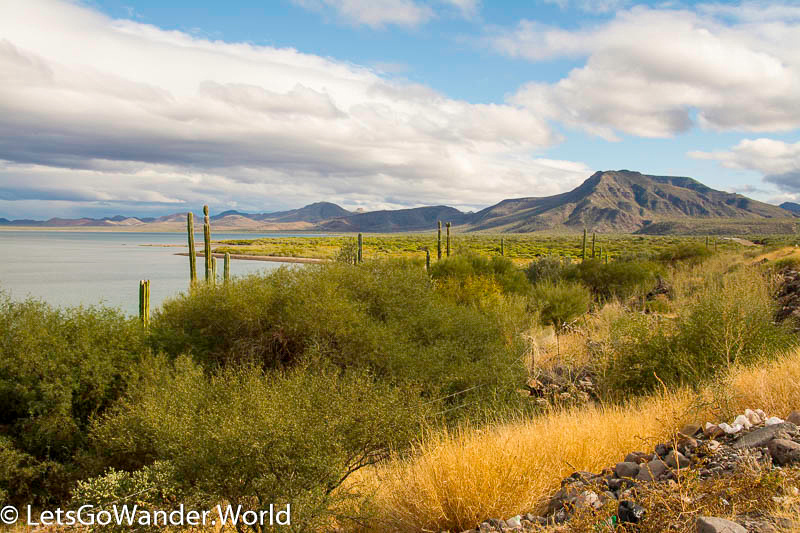 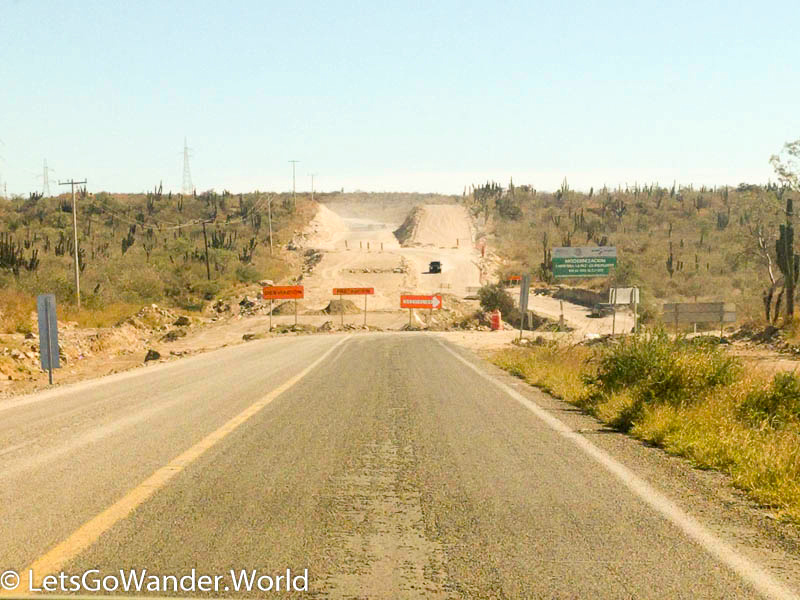 Lots of construction along the way

But, on the flip side, some of the scenery along the way is hard to beat.  From endless desert to rolling hills to high plateaus to craggy mountains, the Baja peninsula has something for everyone. I have also heard that there are numerous awesome beaches along the Baja peninsula, although many of them are tricky to get to.  There were a few accessible directly from the highway and used mostly by brave people who drive or tow their huge RVs down highway 1. 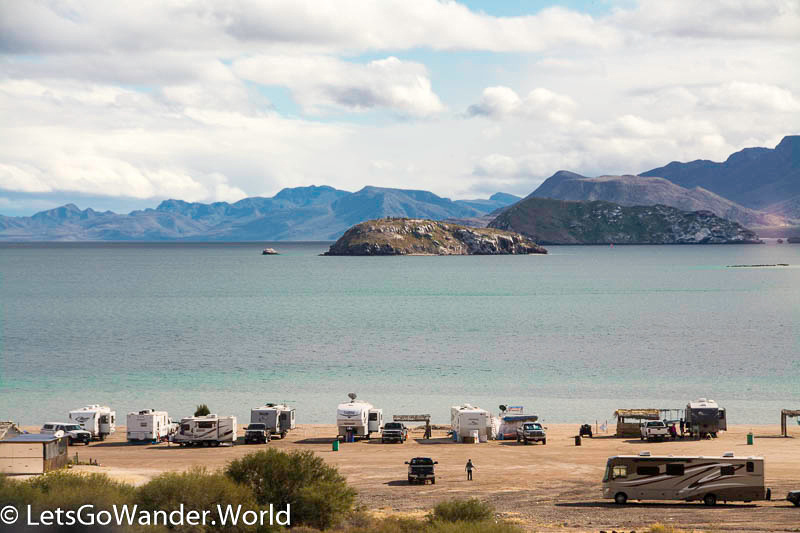 RVs at a one of the beaches along highway 1

The peninsula is home to some of the most remote and rugged terrain that I have seen.  At times, you feel like you are the only ones around for hundreds of miles (and you very well might be).  I was surprised by the number of bike tourists along the route - we saw 10 or so along the length of the peninsula.  If the highway is a little on the hairy side for drivers, you can only imagine how the cyclists feel with cars and trucks whizzing by them on the narrow roads.  It would be a long and desolate ride down the peninsula with prolonged stretches offering no food, water or accommodations along the way.  It’s a good thing cyclists don't require any gasoline… 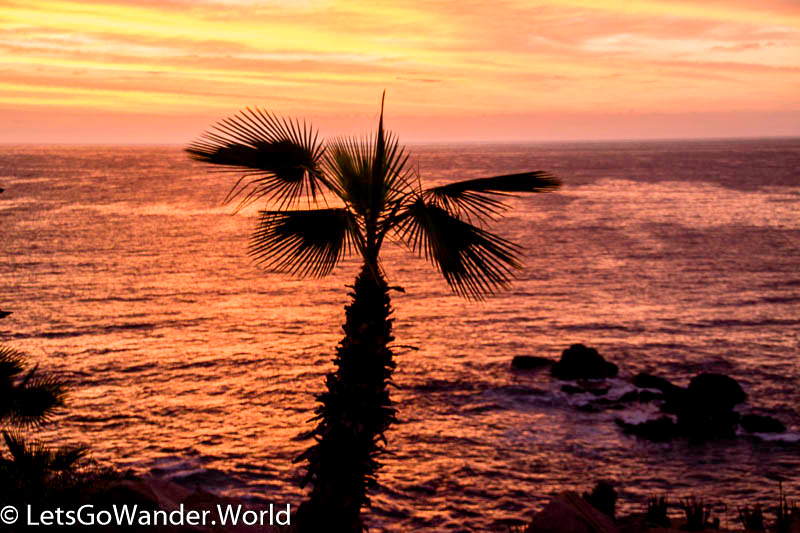 Terry Fisk(non-registered)
LOL the guy selling gas out of his truck!
John R.(non-registered)
Great photos! I did this same drive 15 years ago and it was just as beautiful then. I do remember the scary road for sure!
No comments posted.
Loading...