After deciding to go to Croatia next, we traveled from Belgrade, Serbia to Zagreb, Croatia via a combination of train rides and cycling and then stayed for a few days in Zagreb and then continued on to Rijeka which is on the coast. 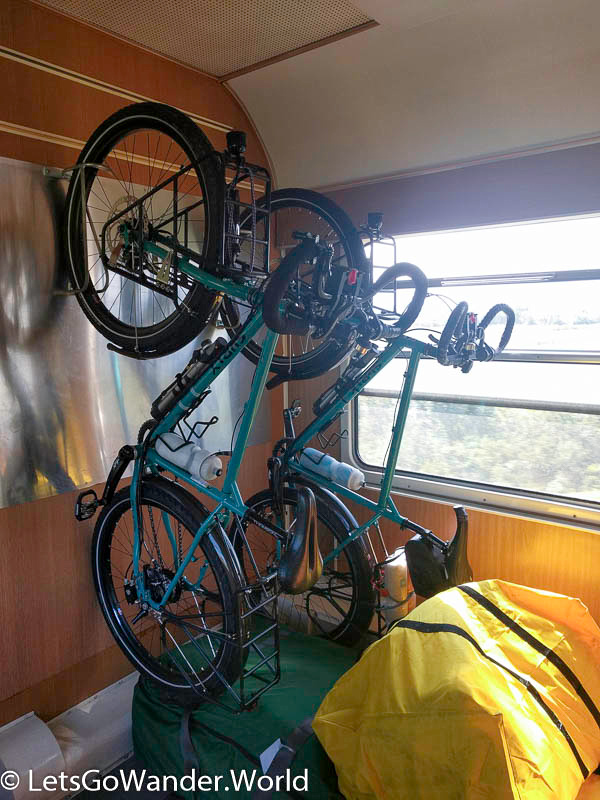 Bicycle compartment on the train to Zagreb.

Unfortunately, the Croatian trains are pretty difficult to take bicycles on.  In fact, most lines do not even allow bicycles, but there are a few that do although they sure don’t make it easy.  They are older style train cars with steep steps that are difficult just to climb up let alone lug a bike up.  So, in order to ride these trains we have to unload everything off of the bikes and load it all in separately.  Oh, and the trains only stop for a few minutes at each station so it’s a race to get it all on (or off) the train without it leaving half way through! 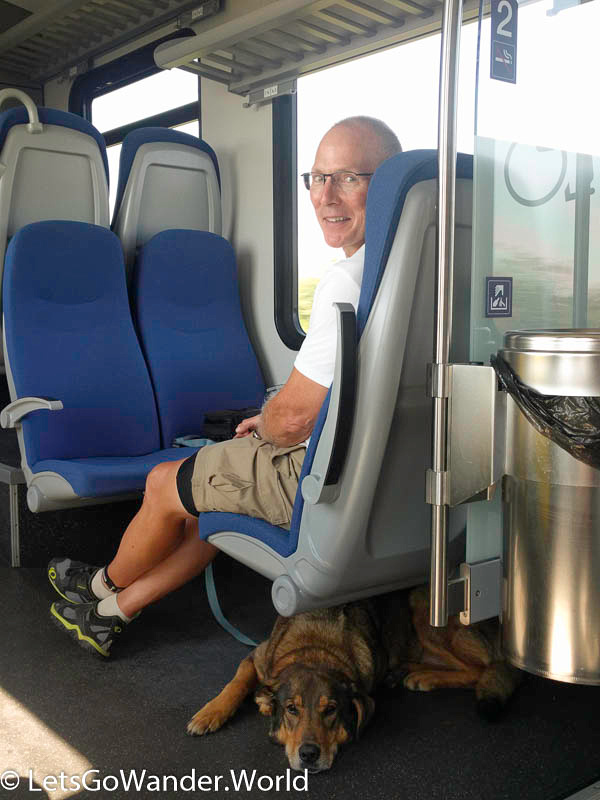 Riding the train from Belgrade.

Despite the difficulties, we managed OK.  We decided to go this way due to the general lack of accommodations across the route from Belgrade to Zagreb (regardless of the dog-friendly factor).

Our general plan for Croatia is to ride around the Istrian peninsula which is at the far north-western part of the country – close to the Slovenian coast and Trieste, Italy – and then travel south through the Croatian islands via ferry and bicycle.  With its olive trees, vineyards, red tiled roofs and rocky coasts, Istria looks a lot like parts of Italy.  There are many cycling routes around Istria and we have seen a handful of cycle tourists along the way.  The riding is pretty challenging, and we have found that you must sometimes choose between backroads with very steep hills and main roads with more traffic. 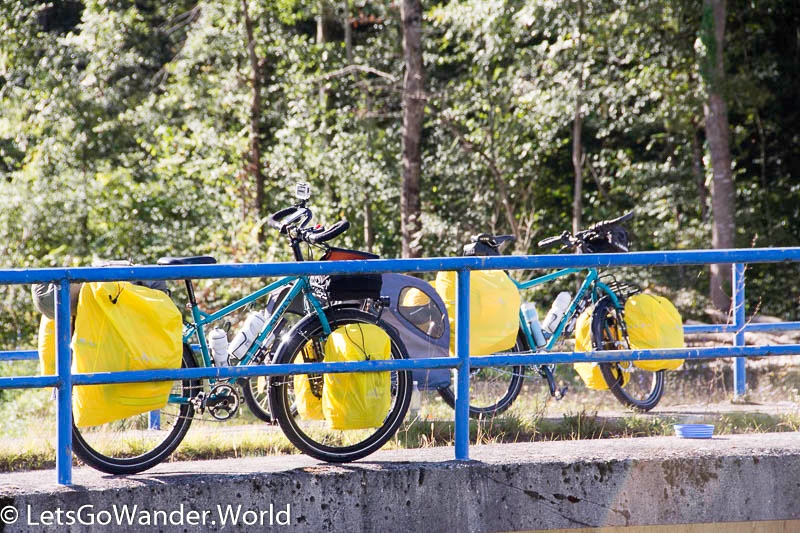 A rest stop on our second day of riding in Istria.

The first day on the Istrian peninsula (where we had to ride over the ridge that separates mainland Croatia from the peninsula) was the most challenging day of the trip by far.  The 3600-foot elevation gain would have been challenging on a road bike with numerous inclines topping 10 percent, but it was quite a killer on our fully loaded bikes.  Plus, it was one of the hottest days of the summer.  At the top of the ridge, there was a festival going on with hundreds of people milling around.  We stopped to eat lunch at the top thinking that the rest of the route must be mostly downhill, but that turned out to not be quite true. 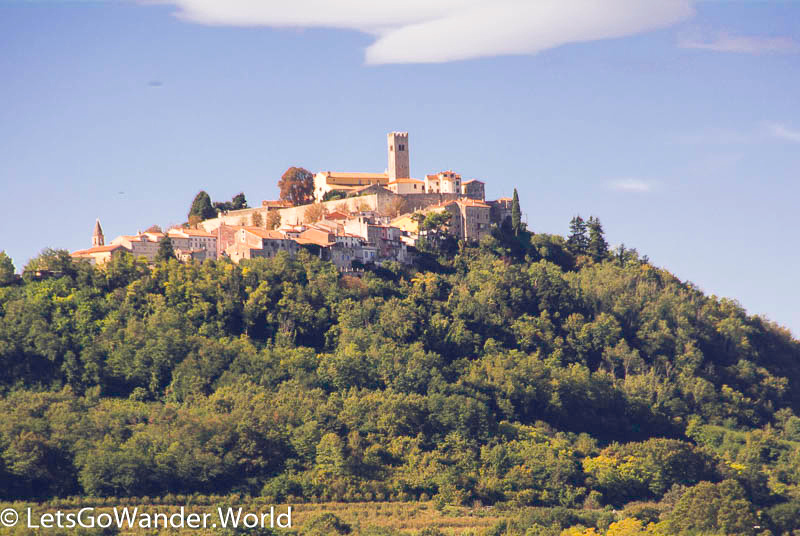 We still had a good ten miles of steep rolling hills ahead of us even though we were already feeling spent.  There were three women that we had seen at the festival that then passed us in their car as they were leaving.  They were so kind to stop and offer us a bottle of water that they had with them.  Then, about an hour later, the same three women pulled up this time with several bottles of ice cold water for us.  They had gone back to one of their homes, filled up the bottles and then driven around until they found us.  At this point, we were totally exhausted and almost out of water.  Their kindness was so overwhelming that I felt like crying. 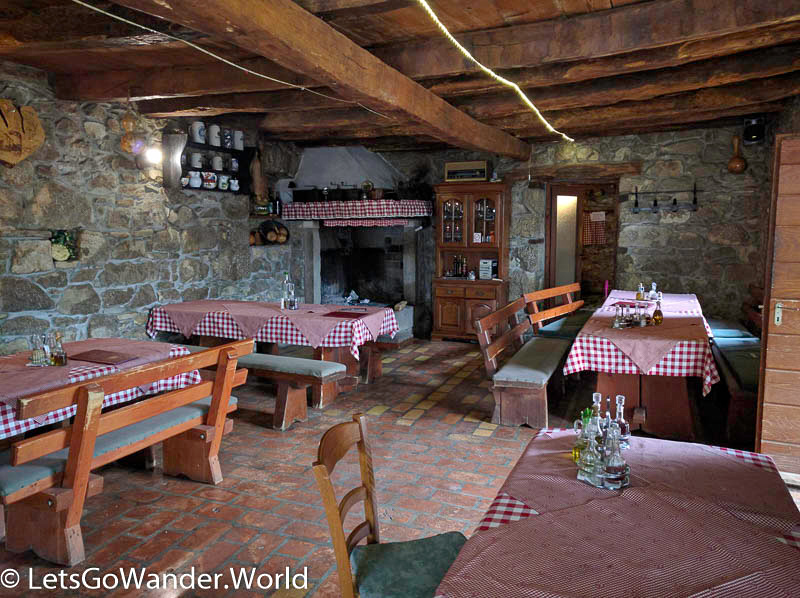 We finally made it to our destination which was a guest house located in an old stone house out in the country.  The family also ran a restaurant onsite which was a good thing since there wasn’t anything else in the vicinity that didn’t involve riding up another (really steep) hill.  Once we had unloaded all of our stuff and put the bikes away, we sat down and shared a liter of water and a liter of coke.  I estimate that we probably drank 5-6 liters of fluids each that day.  We were just happy to have that ride behind us. 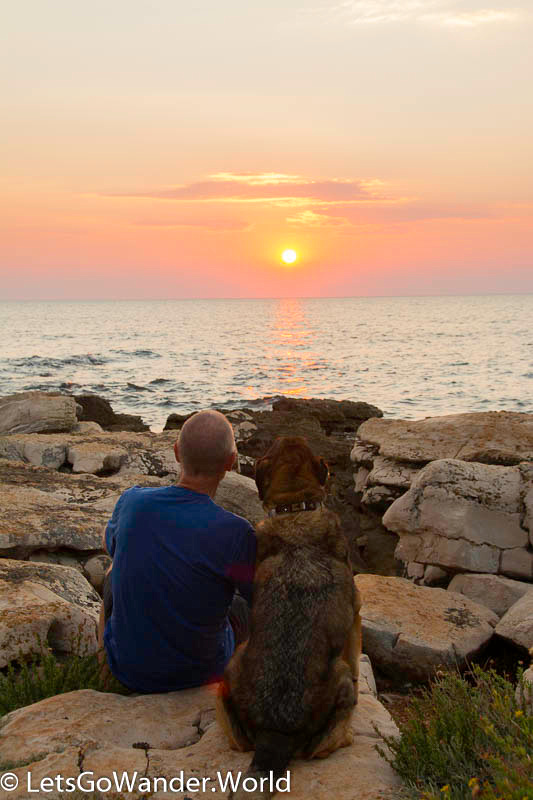 Barry and Cisco enjoying the sunset :)

After that first day, we made our way over to the coast of Istria where we camped for a couple of nights in the largest campground I have ever seen and then made our way down the coast to Rovinj for a few days and then Pula for a few more.  The campground at Karigador was located on the coast and had over 2000 campsites, 2 grocery stores, 2 enormous pools, bakeries, restaurants, bars… you name it.  It also had a dog beach (which Cisco enjoyed) and doggie showers (which he didn’t). 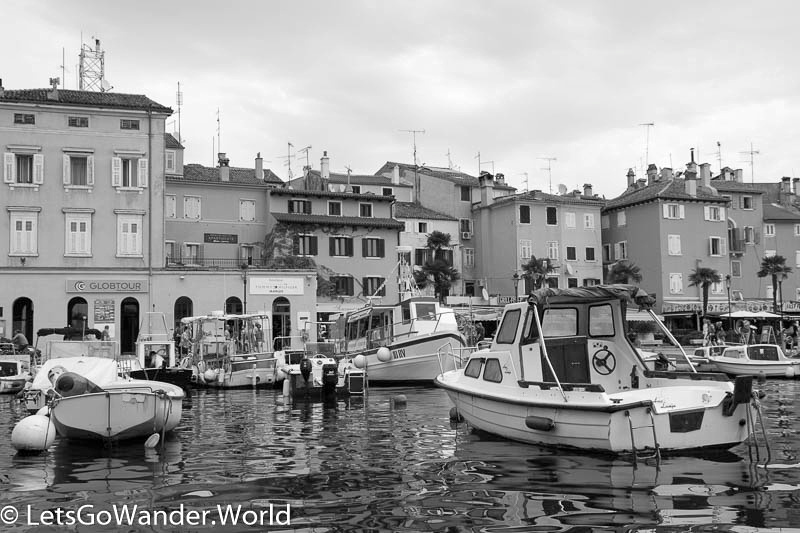 The marina at Rovinj.

Riding from Karigador to Rovinj, we had to ride through the Lim Fjord which was another challenging climb, although nowhere near as difficult as the first day on the peninsula.  Rovinj is a fabulous little city on the coast that reminds me a bit of Portofino, Italy.  The pedestrian-only city center is located down near the marina and offers lots of opportunities to eat while enjoying a lovely view of the sea.  There is plenty of great seafood in this region and lots of Italian food in addition to the traditional Croatian fare (lots of pork and potatoes).  We stayed in a cute little apartment just outside the city center. 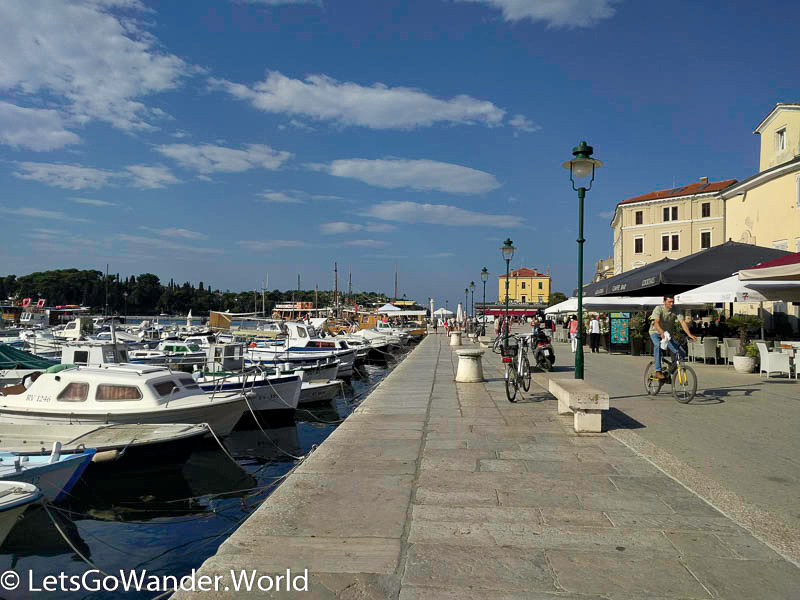 A beautiful day for a walk along the harbor.

After Rovinj, our next stop was Pula which is located near the tip of the peninsula.  Pula is mostly known for its Roman ruins scattered throughout the city center.  The city also has a huge port and lots of nearby beaches.  The coliseum in Pula is one of the six largest remaining Roman coliseums left in the world and is quite well preserved.  It was built between 27 BC and 68 AD. 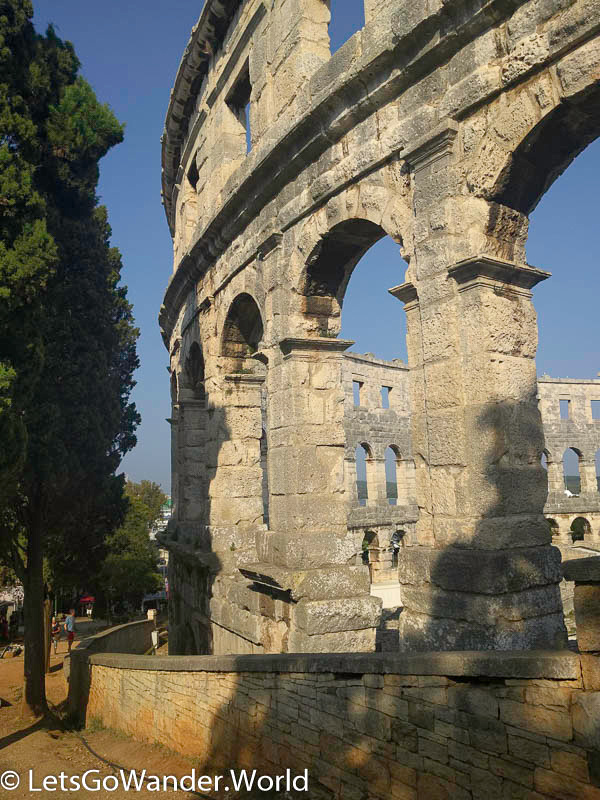 The Roman coliseum in Pula.

Now that we are no longer under a visa time constraint, we are taking our time as we go and staying for 2 or 3 days to get to know each place a little more.  Tomorrow we head back north to catch a ferry to the nearby island of Cris. 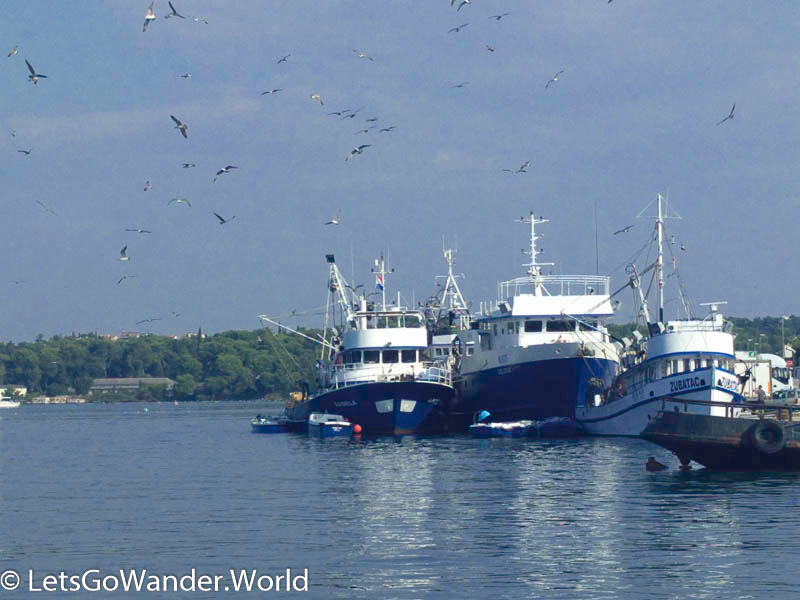 Fishing boats in the Pula harbor.