The Dog Days of Summer

Since the last post, we have made our way through Austria, spent one evening in Slovakia before crossing into Hungary.  During this time, we had a nice peaceful ride along the Danube for several days, staying in a couple of small boutique hotels along the way and then camping one night.  During this stretch, we rode for several miles through the Wachau wine region in Austria which is a very beautiful area. 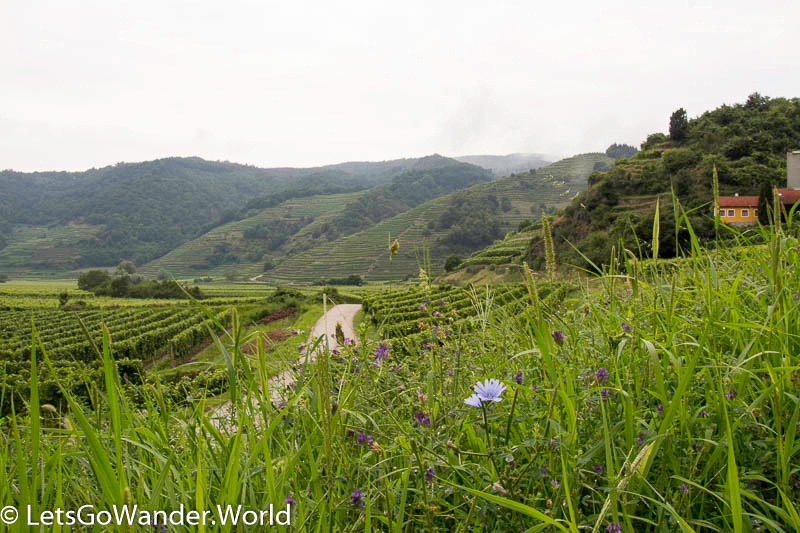 Arriving in Vienna, we stayed 3 nights in the relative luxury of a Marriott where we were able to redeem some free nights that we had saved up, and enjoyed exploring that historic city.  We rode into Vienna along an island that runs along the middle of the Danube river.  The island is about 12 miles long and has recreation paths throughout as well as parks and open space which makes it a nice place to ride a bike or go for a run. 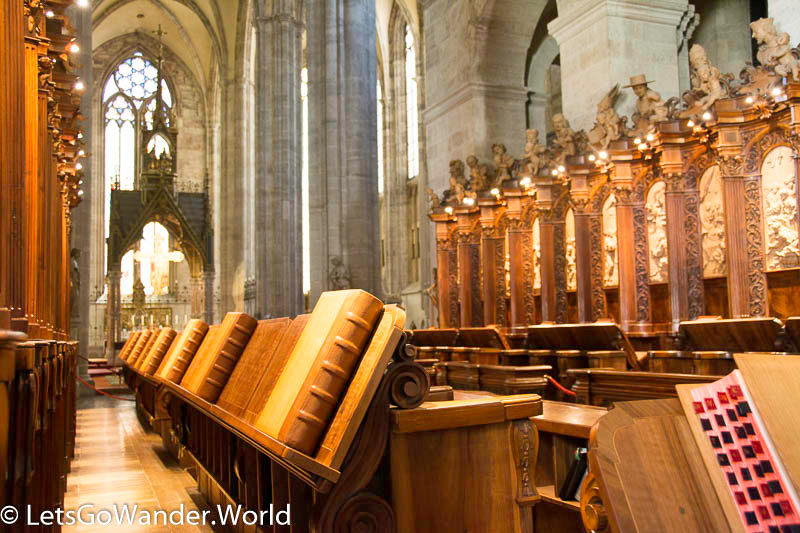 Visiting a monastery in the hills outside of Vienna.

On one of our free days in Vienna we went on a tour that took us up into the surrounding hills to visit two monasteries and an underground lake.  We also spent a bunch of time walking around the historical pedestrian area, located between the famous Opera House and St. Stephan’s cathedral.  On the next day, we went to the Schönbrunn Palace and walked around the extensive gardens which I found to be more impressive than Versailles in many ways. 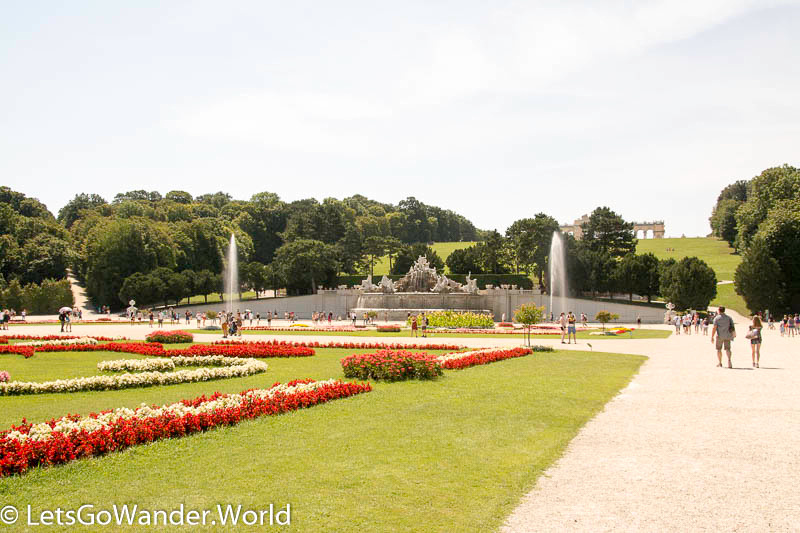 The gardens around Schonbrunn Palace in Vienna.

Vienna is a relatively easy city to navigate by bicycle, especially with the island along the Danube, many dedicated bicycle lanes, and Prater park which is an enormous park which stretches through a large section of the city and provides a nice car-free cycling experience.

Leaving Vienna, we also soon left the banks of the Danube river and rode our way into our 6th country on this trip – Slovakia.  The Eurovelo 6 route makes a quick loop through the capital city of Bratislava before heading into Hungary.  Besides the remnants of the old border crossing from Austria into Slovakia, the abrupt change in language and the increase in old Soviet-style buildings marked our arrival into Slovakia. 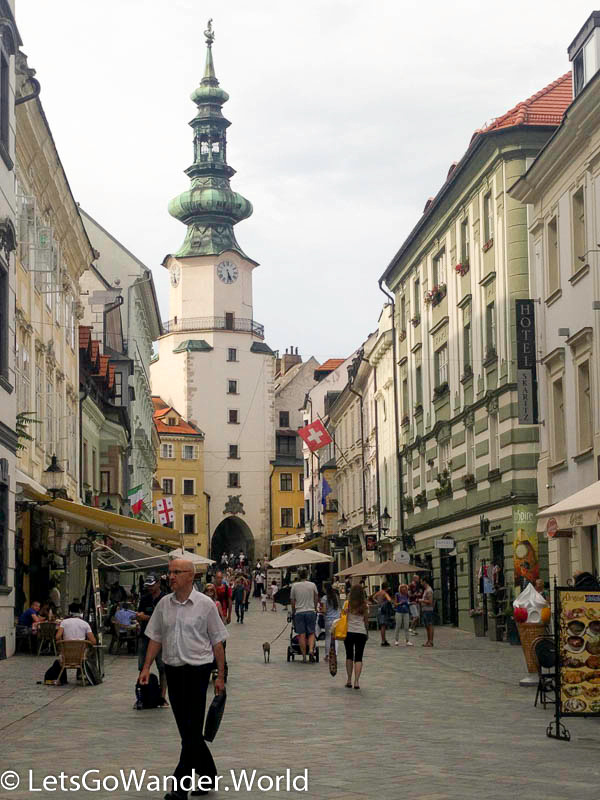 I didn’t really have any expectations for Bratislava, but it turned out to be a pleasant surprise.  There is a nice pedestrian area in the historical city center with lots of shops and restaurants, lots of narrow winding cobblestone streets to explore, and a castle on the top of a hill offering a great view of the city, the river and the iconic “UFO Bridge” that crosses the Danube into the city.  Bratislava is one of the stops for the passenger ships that cruise up and down the Danube, so the city sees a good number of tourists. 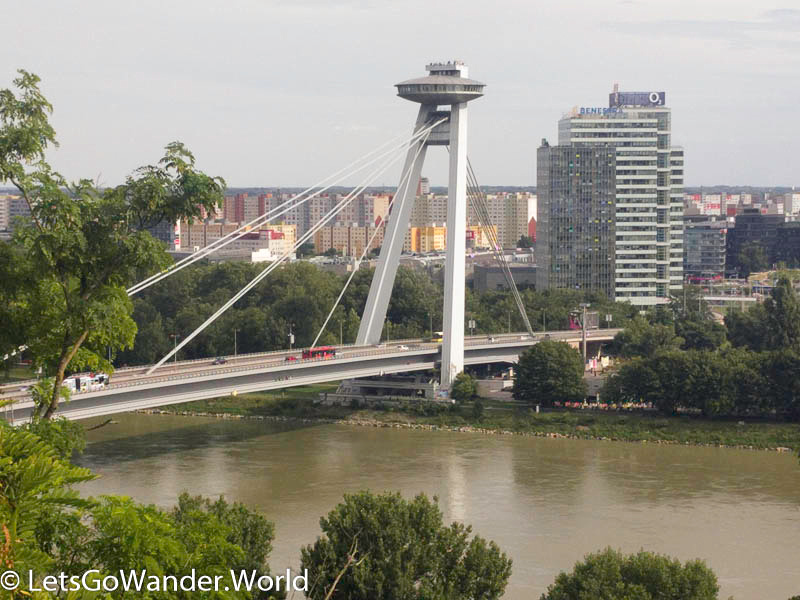 After our one night in Slovakia, we were on our way again, crossing into Hungary and making our way to a city called Gyor where we stayed for two nights.  Gyor was another pleasant surprise for us.  With a population of about 125,000 Gyor also had a nice pedestrian historical area, lots of shops and restaurants, two very impressive cathedrals, and LOTS of gelato vendors.  Although the city is not directly on the Danube, it clearly sees its share of tourists.  Given the relatively small size of the city, I was surprised how many Americans were there – some business travelers, many tourists, and also many military personnel. 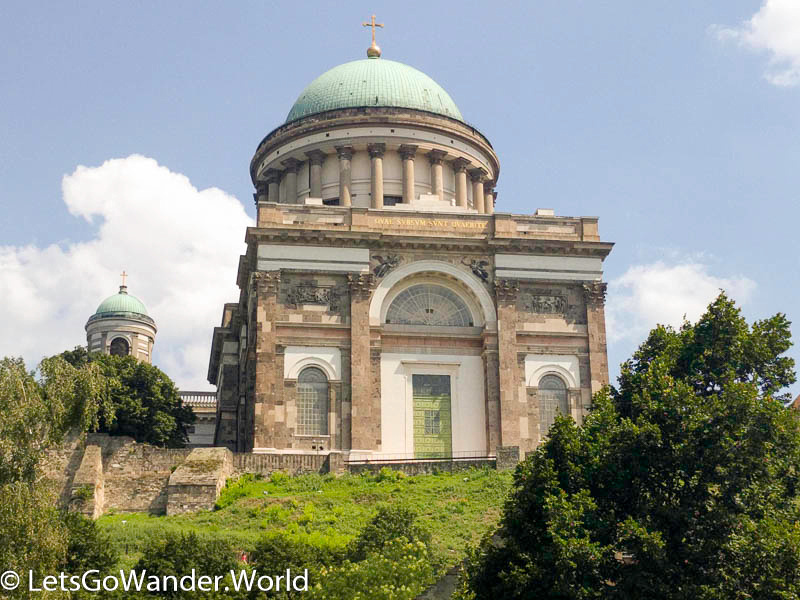 The Basilica in Esztergom, Hungary.

Hungary has been a very pleasant experience so far.  The people are wonderful and they are big dog lovers.  In fact, Hungary has had the most pet dogs of all of the countries that we have visited so far.  We have had lots of people taking pictures of Cisco in his chariot.  On one stretch of road, a guy was stopped by the side of the road taking pictures as we went by.  Then, about a mile later, there he was again!  He kept hopping in his car and driving ahead of us to get more pictures!  This went on for several miles.  On another occasion a woman nearly ran a red light as she tried to take our picture while she was driving.  I keep wondering how many Facebook pages Cisco has appeared on. 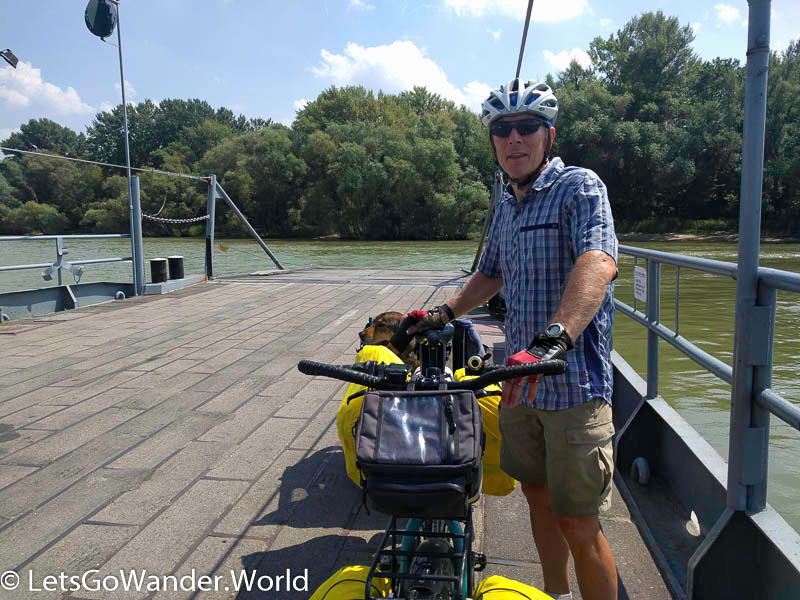 Crossing the Danube by ferry.

We have been relatively lucky with the weather lately – it has been hot and fairly humid but not as hot as it can be at times.  I’m a bit behind in my posts, but next I’ll cover our trip to Budapest and beyond.  Stay tuned!