You could say that our last night in France was somewhat anti-climactic.  We camped at a depressing little campground in Mulhouse, ate pizza for dinner, and listened to a loud techno-pop concert that went on well into the night at the park next door.  The next day, we were back on the road on our way to Switzerland.  As we crossed a bridge on our way into Basel, Switzerland, we got our second glimpse of the Rhine river on this trip (the first one was on our train ride from Frankfurt). 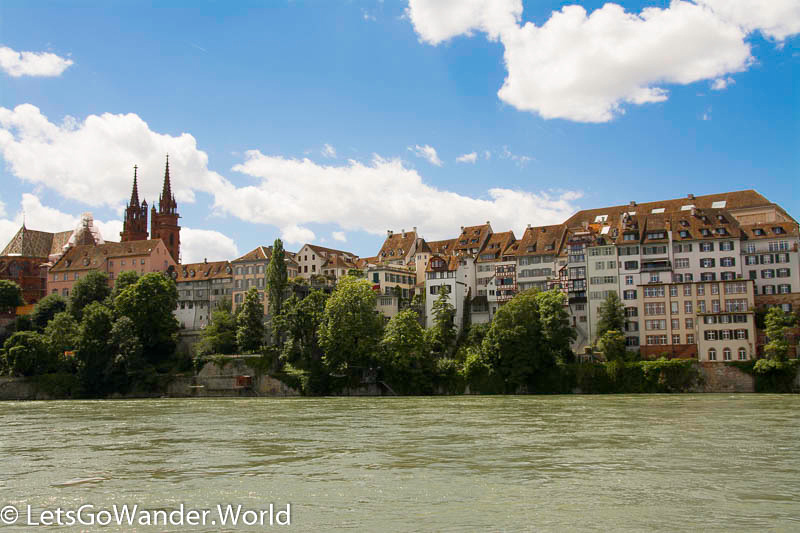 Riding through downtown Basel along the Rhine.

Basel is really a beautiful city – much more so than I had anticipated.  The Rhine flows at a pretty high rate right through the city, and the banks are lined with walking paths, restaurants and cafes.  On hot days, many people don swimsuits and float down the Rhine with their towels and clothing in water tight bags.  We took a rest day in Basel, and spent it walking around the picturesque city and getting lost on the tram system.  One of the most immediately obvious differences between France and Switzerland is the prices.  The hotel we stayed in cost more than twice the exact same hotel that we stayed in only 60 miles away in France.  Food prices were generally even higher than what we saw in Paris. 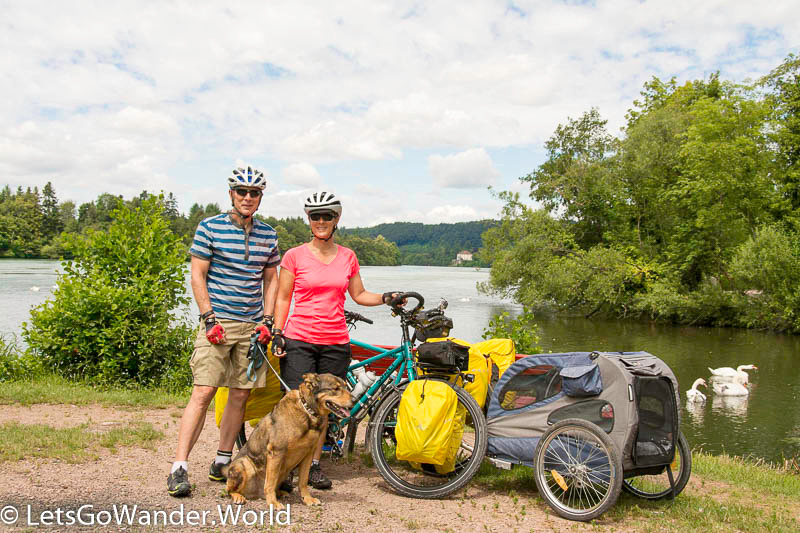 Lunch spot along the banks of the Rhine.

Making our way out of Basel, we followed along the Rhine river and were treated to several beautiful scenes along the way.  So far, the Rhine takes the prize for the most picturesque river along our route.  Since getting to this part of the route, the number of cycle tourists has at least quadrupled.  I’m not sure if this is because of the location or because we are now in July when summer vacations officially start for Europeans.  Both the Eurovelo 6 and Eurovelo 15 routes follow the Rhine in this area. 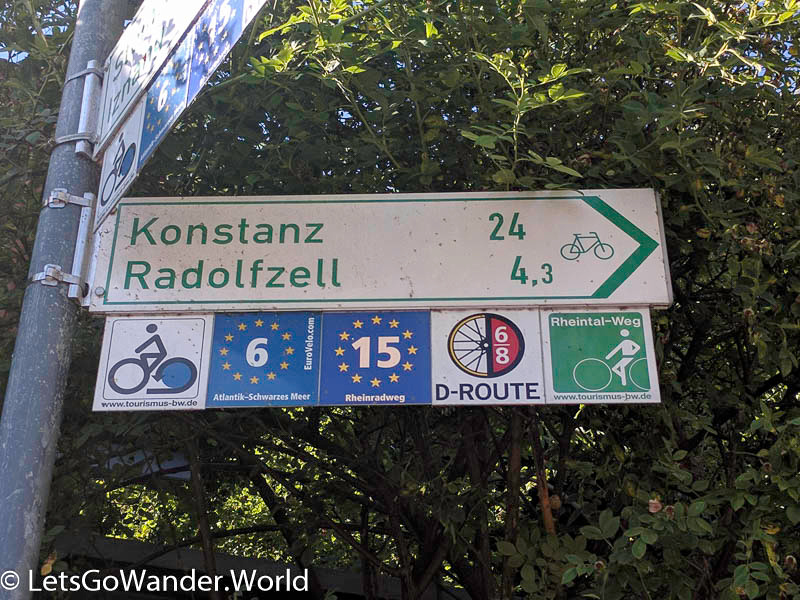 Signage along the route.

We camped at a crowded campground on the banks of the Rhine in Germany where the tent camping area was full of cycle tourists.  Cycle tourists come in all forms – there are those that travel lightly with minimal gear, there are those that are on paid packages that provide bicycles and transport gear from town to town, and there are those more like us with more gear.  There are a surprising number of families on bike tours – many with babies and toddlers in trailers and even young children riding their own loaded bicycles. 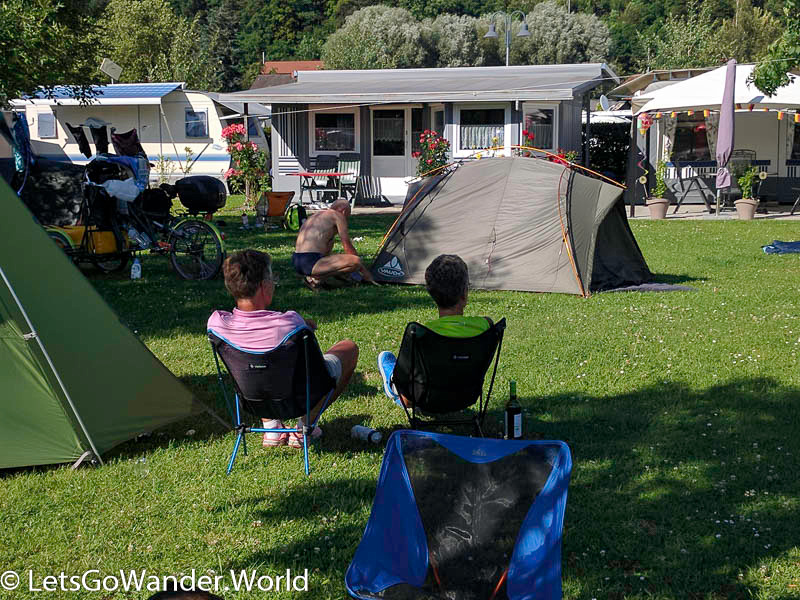 Fellow campers watching the show put on by Mr. Speedo.

These campgrounds offer great people watching opportunities.  At this particular campground, we saw a couple whom we have seen a few times along the route.  They have a tandem bicycle that is half recumbent bike (for her) and half regular bike (for him).  We also had Mr. Speedo (thus named for his practice of stripping down to his Speedo in order to set up his campsite) who rides a reverse tricycle with all of his gear carried in the front of the bike.  So far, we have not run into any other American cycle tourists and have only seen 1 or 2 other people carrying dogs with them. 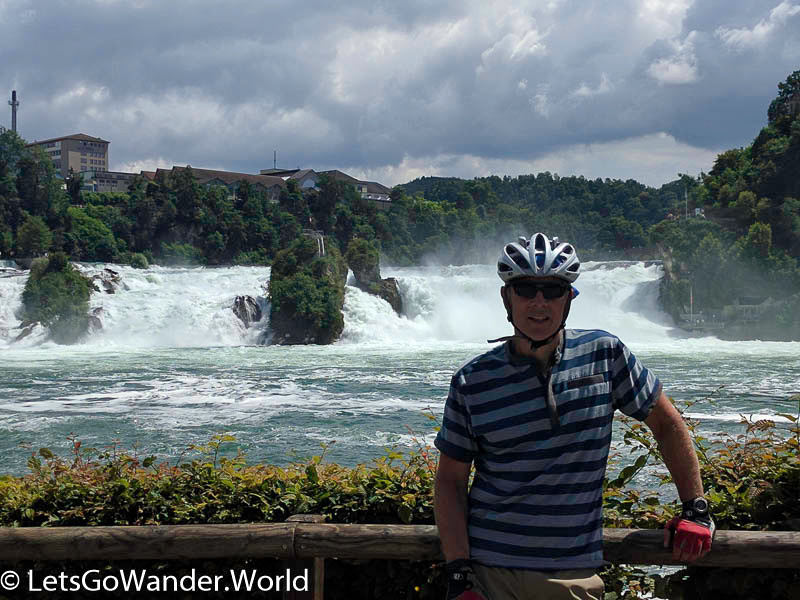 Barry in front of the Rheinfalls

After leaving the campground, our next stop was near the Rheinfalls which is the largest plains falls in Europe.  The Rhine is running high at the moment, so the falls were quite spectacular.  The day was a beautiful sunny, warm day and there were lots of people enjoying the falls.  We stayed at a hotel within walking distance of the falls.

Our last day before the next rest day took us from the Rhine to the beginning of the Danube river.  This was one of our most difficult riding days with plenty of hill climbing on a hot day.  On my regular bike without all of the gear, this would have been a challenging ride but it was much more so with all of the gear.  The route was mostly uphill with grades up to 14% which is more than we can ride up with all of our gear, so there were a couple of spots where we had to push our bikes.  Unfortunately, pushing these bikes with all of the gear is nearly as difficult as riding them up such a steep hill.  But, we were treated to expansive views at the top where I expected the family Von Trapp to come skipping along at any minute.

Currently, we are in Tuttlingen, Germany which is located near the headwaters of the Danube.  Here the Danube is rather unspectactular - barely as big as the Platte river that runs through Denver.  But this marks the beginning of the last stage of this tour as we will follow the Danube all the way to the Black Sea.  At this point, we have covered over 1100 miles in 4 different countries but we still have almost 2000 miles to go.

Meghan Chandler(non-registered)
Hi Megan and Barry, I just got your blog info from Carrie last night at Pam and David's...I am so freaking excited for you two!! I am looking forward to following the blog.
Michael McLaughlin(non-registered)
Nice piece Megan. Gives people the feel of the trip esp with your great photos!
No comments posted.
Loading...