Today we are in Linz, Austria.  To date, we have come just over 1500 miles through 5 countries and we have reached the half way mark on our journey to the Black Sea.  Since the last post, we have followed the Danube through Germany, watching it grow from a small river to a large scenic river.  These last two weeks have taken us along some scenic routes through several small German towns, as well as a couple of larger cities.  I made a short video of our trip from Burgundy through Bavaria - check it out below.

Coming out of Tuttlingen, construction along the river forced us to take an alternate route up through a hilly forested area.  It was definitely a beautiful route, but difficult with lots of hills up to 10% in grade.  It was in this section that I developed a particular dislike for e-bikes.  For those of you who aren’t familiar with them, e-bikes have an integrated electrical motor powered by a rechargeable battery which “assists” the rider as he/she pedals.  So, as we’re slogging along up a steep hill at a snail’s pace, here comes granny on her e-bike blowing past us while barely breaking sweat.  OK, maybe my problem is that I’m jealous.  E-bikes have become quite popular in Europe and many people use them for bicycle touring.  In a way, they make the experience more accessible to a wider audience, but I have to say they are rather demoralizing for the rest of us. 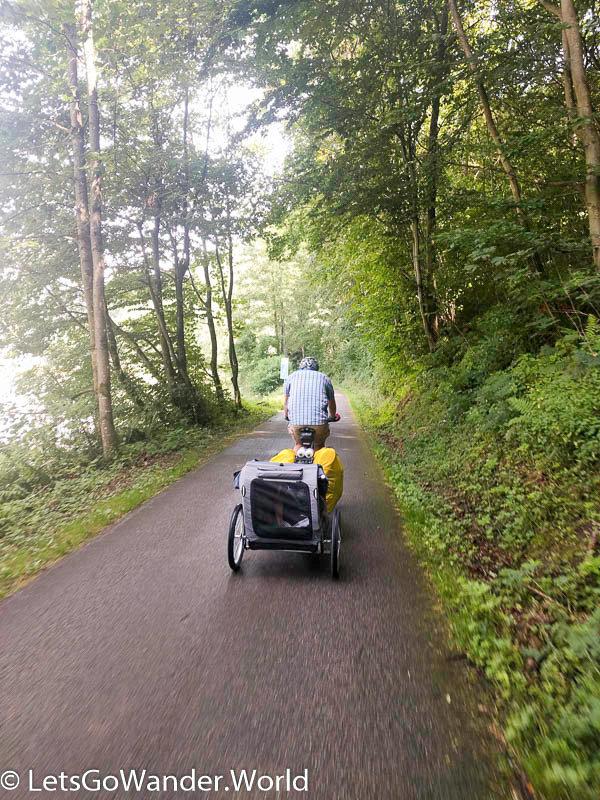 Riding along the Danube

Our steepest hill so far came on July 11 – it was a 20% grade according to the sign.  It was so ridiculously steep, riding up the hill was completely out of the question.  In fact, pushing the bike up the hill was damn near impossible.  Cisco had to get out and walk.  A very nice person who lives at the top of the hill had a lovely picnic table in the shade with a drinking fountain for cyclists (or whoever wandered by). 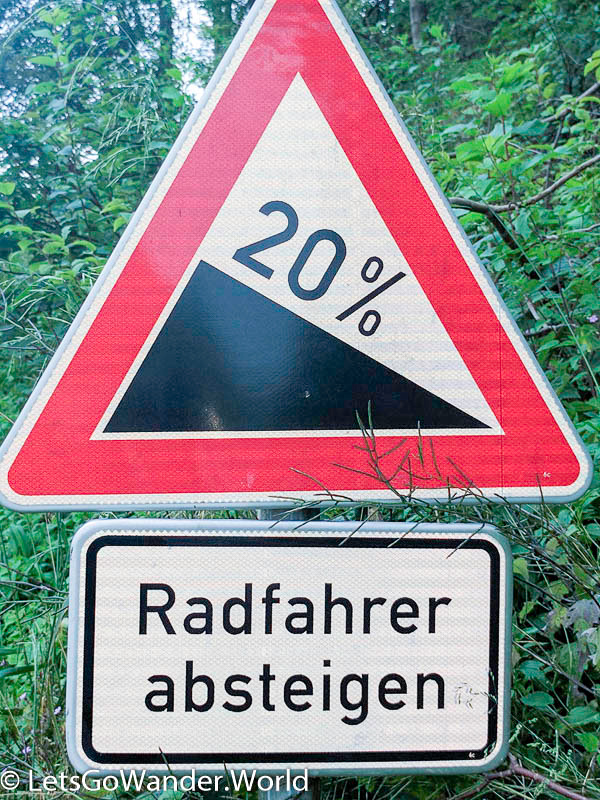 Our longest day (mileage-wise) came on July 14 when we rode 62 miles.  We had planned to ride 37 miles and stay at a campground near Dillengen, Germany but once we arrived at the campground at just after 1 pm, we were informed that the office was closed until 4 pm.  After looking around, we were underwhelmed by the looks of the campground and decided to continue on to the next town to see if we could find a place to stay there.  Barry assured me that it was only 18 miles.  25 miles later, we finally pulled into Donauworth and luckily were able to find a hotel with a room available that accepted dogs (phew!). 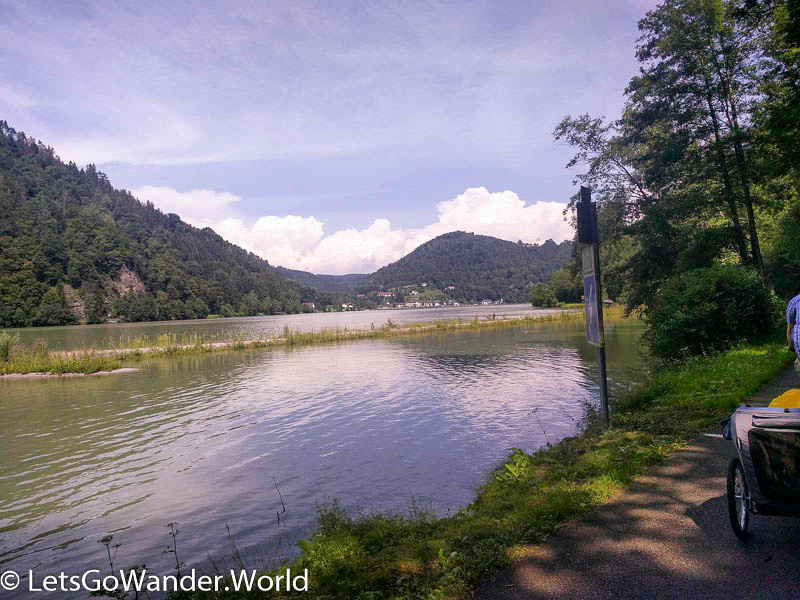 I have been surprised by how many businesses in Europe close down for several hours during the middle of the day.  Somehow I thought this was a practice only in warmer climates (to avoid the hottest hours of the day), but it is very common in France and Germany, especially in smaller towns and rural areas.  Sometimes it presents a problem for us in addition to the “everything is closed on Sunday” rule. 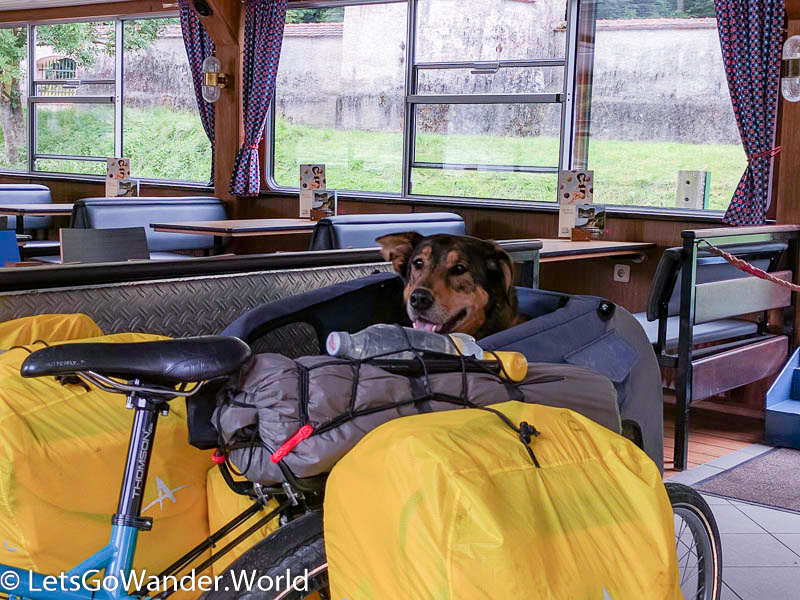 Cisco on his first ferry trip.

On our way towards the town of Regensburg, Germany we were cycling on the bike path alongside the Danube when suddenly the path ended at a boat dock with a ferry parked at it.  Ahead was a narrow gorge with no way through other than by boat.  So, we paid our 21 euros for us, our 2 bikes, one dog, and one dog trailer to board the ferry.  It turned out to be the easiest 5 miles of the trip! 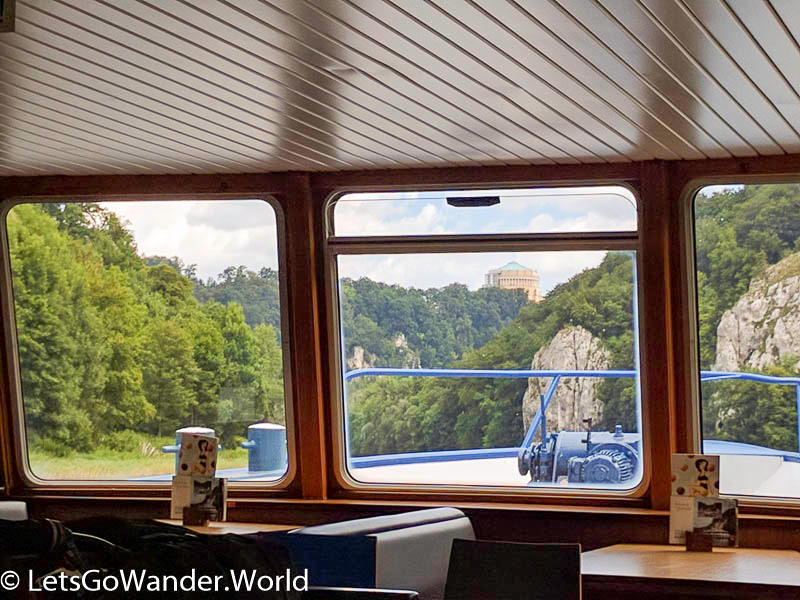 Taking a ferry through the gorge.

Eventually, our travels took us to Passau – our last stay in Germany.  Passau is where people often start and/or end their bike tours or boat cruises along the Danube.  The route from Passau to Vienna is the most popular bike route in Europe.  I was concerned that the path would be crowded with cyclists like the Cherry Creek bike path in Denver on a sunny Saturday morning, but that’s really not the case.  Mostly we notice the number of cyclists when we stop in a town along the way – and then they are everywhere!  We’ve even seen a few people hauling their dogs along like us.  After Passau, we crossed into Austria.  As with other border crossings so far, there was no indication of exactly where the border was but soon we noticed that the license plates indicated A for Austria. 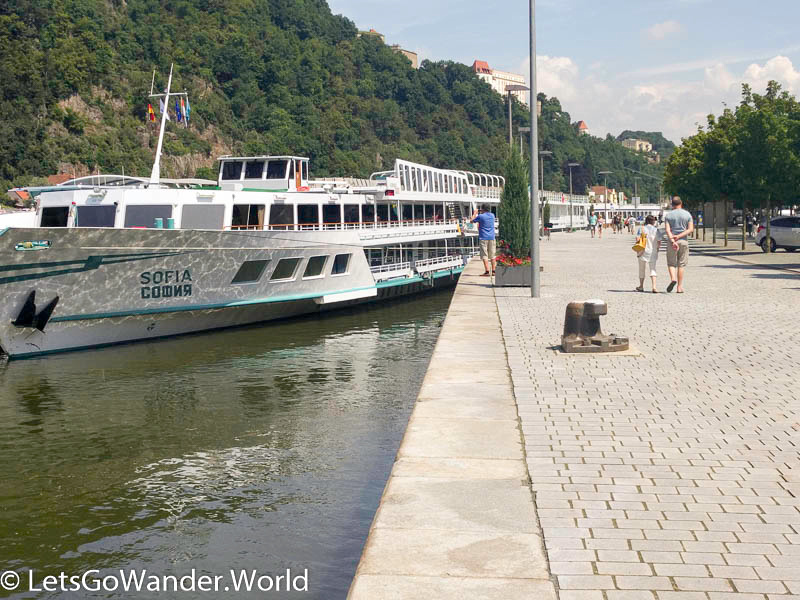 Since we are in the busiest part of our route during the height of summer vacation season, we have planned out our route and accommodations through the next few weeks which will take us all the way through Hungary.  We have until mid-August to exit the EU (Schengen zone) based on our tourist visa which allows us to spend 90 days out of any 180-day period, so we are on track to come in just under that limit.  Once we are out of the Schengen zone, we will have more flexibility to linger in places if we want to since we will have 90 days to spend in each country.

Bikes parked in the Hauptplatz square in Linz, Austria.

Michael McLaughlin
Well quite an accomplishment!
No comments posted.
Loading...