After a relaxing rest day in the town of Fourmies with great weather, we went to bed with the expectation of all day rain for our ride the next day.  At around 5 am, I awoke to what sounded like heavy rain already, but it just turned out to be Cisco taking a shower.  You see, Cisco likes confined spaces because they make him feel secure, so he likes to sleep in the shower or the bathtub.  The shower at the hotel was just the right size for him, so he decided to curl up in there for the night.  However, the shower faucet was rather low and so when he bumped it he ended up turning the shower on himself.  He was none too happy about it either.

Since we were already up, we got an early start on our ride for the day.  The way out of town was a bit of a hill interval workout, but then we turned on to a beautiful paved path through the forest.  Cisco even stretched his legs a bit running beside us for a while which I think more than made up for the unpleasant wake up shower.  We made our way through a cute little town called Hirson where the church bells were ringing and the local boulangerie was packed with people picking up their morning croissants. 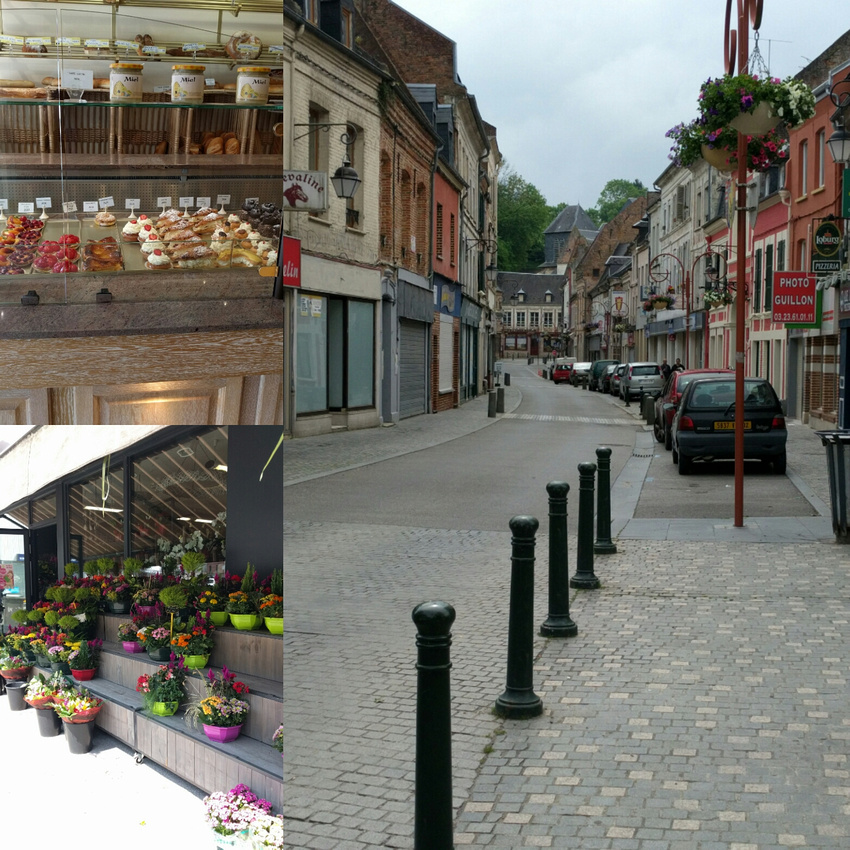 We stopped to pick up a baguette sandwich for lunch and continued on our way.  The weather held out for us, with only fog and cool-ish temperatures and the path was beautifully paved the entire way to Guise.  And, this was the first day that the route was more downhill than up – woohoo, what fun!

This path was an old converted railway line, so along the way there were buildings like this one that used to be old railway stations that have been converted to homes now.  Many of them still have a little building next door that used to house the bathrooms – complete with the signs for Dames and Hommes. 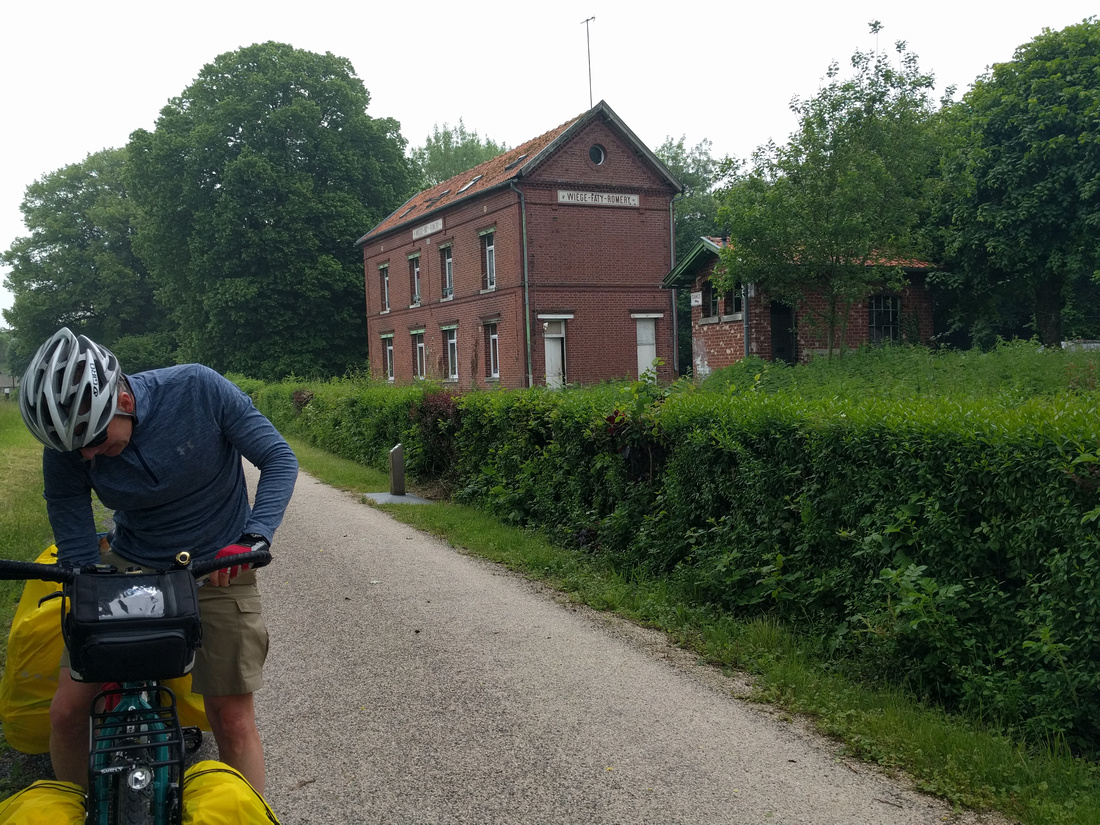 In Guise we found our campground relatively easily and set up our camp.  This was the earliest that we had finished up a ride and we had some time to kill, so we went in search of food.  Unfortunately, this was a Sunday and on Sundays in France everything is closed – and I mean everything.  We had pulled in to town just a bit late to catch even the supermarket before closing.  So, we headed to – wait for it – McDonalds.  It was the only thing open.  Good old American capitalism at work. 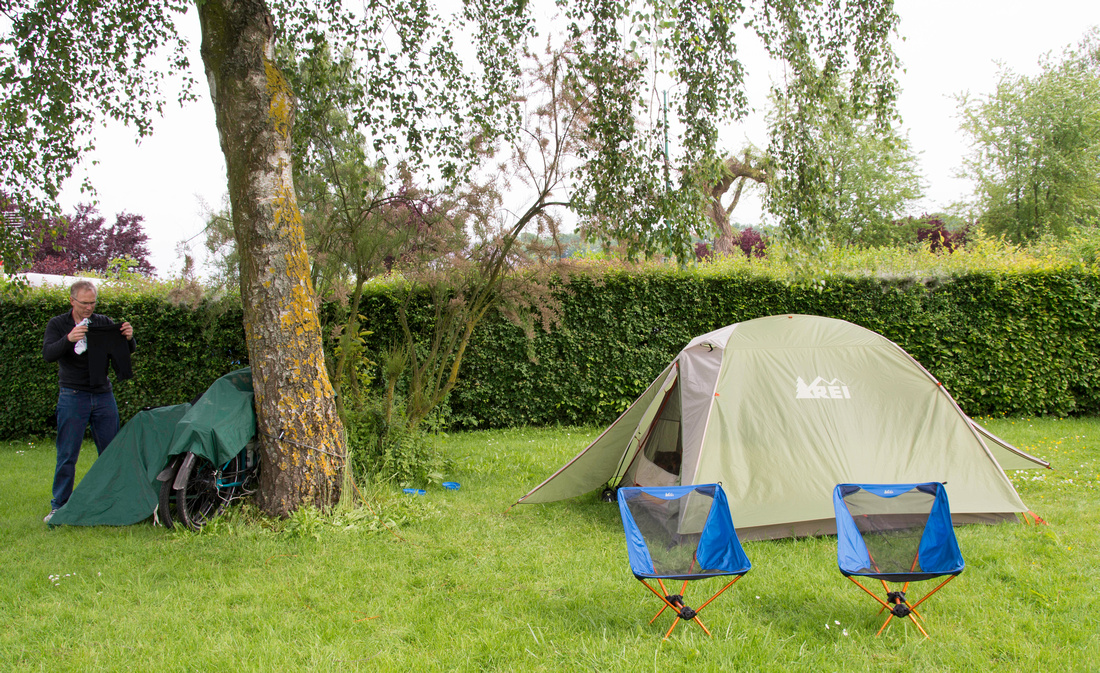 Camping in Guise - dry for the moment.

The next morning, our luck with the weather turned, and it was raining lightly when we woke up.  As we packed up and got ready to go, the weather just continued to get worse.  The rain picked up and so did the wind.  Yay.  As we headed out, neither of our Garmin bike computers were working quite right, so we ended up turning down a one-way street the wrong way.  A man in some kind of work truck explained this to us (at least I assume he did, but I couldn’t understand a thing he said so I just stared at him).  He went on to tell us more helpful information that we couldn’t understand in the slightest.  Finally, we got headed down the right road, and then our GPS computers told us to turn right down a seldom used overgrown unpaved path, so we did.  And, it led us to a rutted muddy messy path that was barely passable.  I won’t bore you with all of the details, but this went on for a while until our bicycles were caked with mud and we had to walk with them just to get through.  Finally, we got to a paved road and decided to ditch the official (?) EuroVelo 3 route that was programmed into the GPS computers and just follow paved roads to our next destination.  It was just way too rainy to deal with any unpaved roads or paths.  We squirted water from our water bottles on our chains to wash off enough mud so that we could pedal, and headed off. 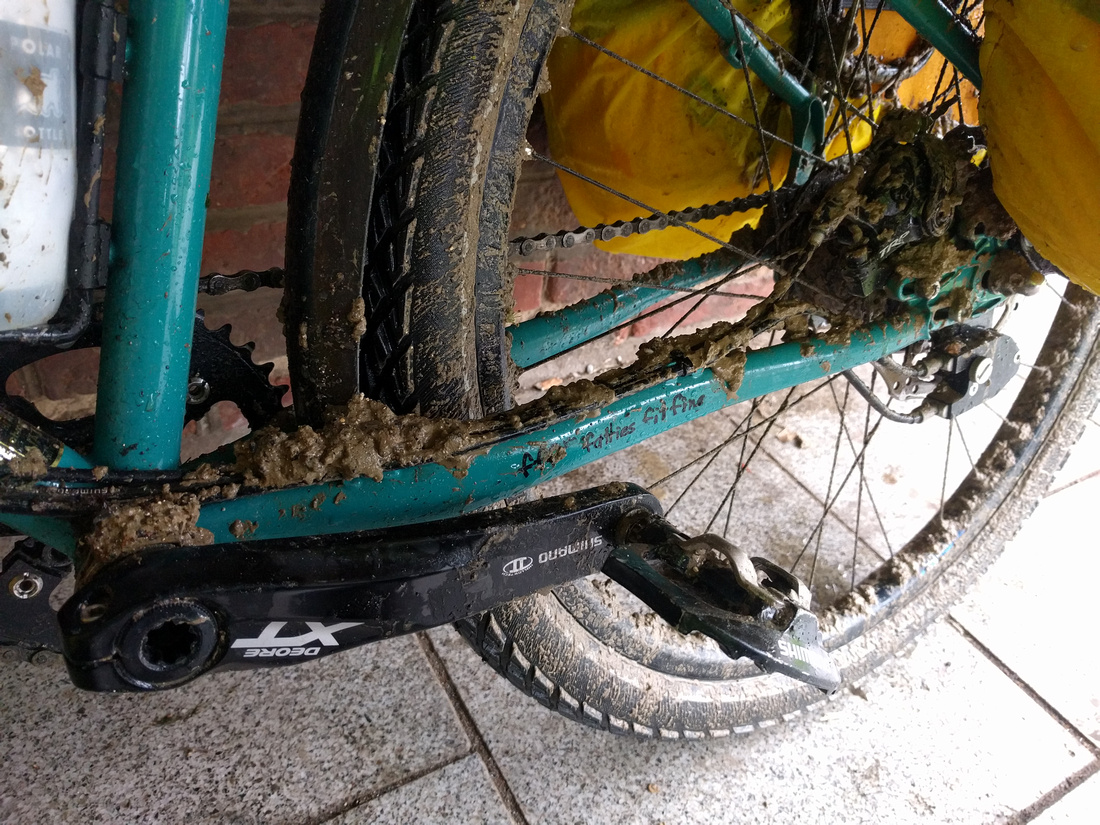 This was after I cleaned up my bike a bit

After a quick lunch under a shelter that we were happy to find (and the addition of some more clothing to head off the chills), we finally pedaled into our next campground in Le Fere at around 2 pm… in the pouring rain…  The campground manager asked us if we were camping with a tent by making an upside-down V with his hands (this seems to be the universal sign language for tent at all campgrounds) and then looked at us with pity when we said “yes”.  He walked us over to a building, and suggested that perhaps we could camp in the laundry room instead.  It was just a room about 8 by 15 feet with 3 sinks in it, but it was dry!  Yes!  We would love to camp in the laundry room.  He later came with a key to the room for us and a hose to clean off the bikes.  Wow, what service for 9 euros!  We were extremely grateful for his kindness.

At least someone is warm and dry.

The next morning, we took advantage of a brief break in the rain and headed out once more, determined to avoid any mud.  The route on this day took us mostly along a path which followed a canal.  About halfway, the signs for EuroVelo 3 took us away from the canal even though our GPS route once again wanted to take us down an unpaved muddy path.  The day started out with light mist which turned into a heavy mist which turned into rain.  Around 3 pm, we finally pulled up to our hotel in the suburbs of Compiegne.  I can only imagine what the woman behind the desk must think of us – two soaked people on bicycles loaded with gear and a trailer with a dog.  But, she was very gracious and allowed us to store our bicycles and trailer in an unused meeting room.  The trailer has proven to be pretty water proof so at least we don’t show up with a wet dog.

The news is filled with stories of the flooding around northern France – luckily we haven’t experienced any of this (yet).  I’m hoping that our upcoming weekend in Paris doesn’t turn out to be a total washout and that our route there isn’t flooded.  We have had reservations for an AirBNB in Paris for a few months, so we’re doing what we can to stay on schedule for that.

Thank you to all of you who have sent us messages and comments along the way.  I apologize that my responses may be delayed as we don’t always have wifi access.

Dad(non-registered)
Megan your posts are great. I think it is amazing what you are doing. An adventure that you and Berry will remember for the rest of your lives. And I love your pictures.

Here in Denver it has turned to summer. No more rain; sunny days and increasingly hot temperatures now prevail. It has actually been quite nice.
Cici(non-registered)
I've read the Cisco shower story twice. It makes me smile!! I love your posts and photos.
Andrea(non-registered)
I am so sorry for you for this weather! Keep my fingers crossed that it gets better soonest...
Love your comments and photos, especially the heartwarming photo of Cisco :-)
Mary Derry
Such wonderful pictures, minus the muddy bikes. Your challenges are tough with the rain, thank goodness for some down hill routes. Cisco sure looks comfy and happy!! It's fun reading your blogs and seeing Europe thru them. I hope the rain ends for you soon.
Andrew(non-registered)
Yuck - Have been seeing all of the new about the rain and flooding from here. Sounds like the route through Bavaria and Austria is getting hit too. Hopefully the weather pattern will change before you get there.
No comments posted.
Loading...