We rode into Paris on a Friday afternoon, coming in along one of the canals.  As we got nearer to the city, there was more traffic and more people and then finally more chaos.  As we got into the metropolitan area of Paris, the number of people on the streets – walking, biking and driving – was staggering.  We came in on a busy road with a bike lane that was actually a separate tiny little road between the sidewalk and the main road.  At times the bike lane was blocked by scooters, pedestrians, or trucks, but it was the first glance into how bicycle friendly Paris is for being such a large city.  With so much going on and so many people around, it was all we could do to concentrate on the traffic and the lights and our route ahead. 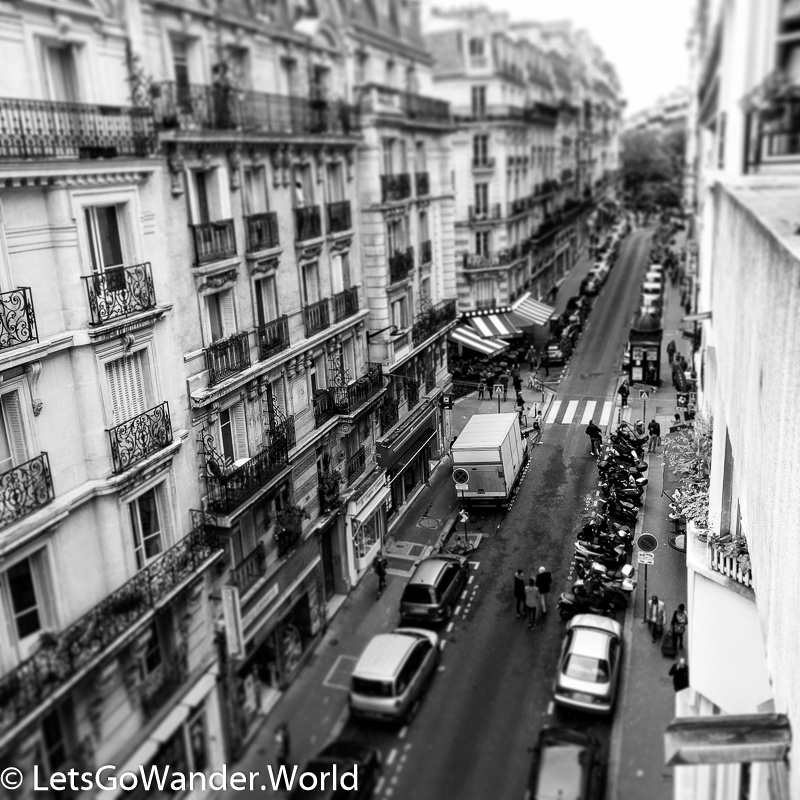 View from our AirBNB apartment

We had reserved an AirBNB in Paris for the weekend several months ago.  It was located in the 18th arrondisement (district) of Paris on a narrow street with a metro stop just a few feet away and several boulangeries, cafes, and small markets within a short distance.  It was a one bedroom apartment – about 600 sq ft – which is pretty big by Paris standards and it was located in an old building with a tiny elevator.

Given that the ride into Paris was a very long day and we were sweaty and probably (ok definitely) a bit stinky, I was happy to hear that the owners of the apartment would not be able to meet us but would leave the keys in their mailbox.  Upon arriving, we began unloading the bikes and I shuttled our panniers and the dog up to the apartment via the tiny elevator while Barry secured the bikes in a bicycle storage room located on the first floor.  On the second trip up to the apartment, I had a horrible sinking feeling in my chest as the apartment door closed shut behind me.  I had left the keys on the kitchen counter, so now they were locked in along with Cisco.

So much for not meeting the owners…  A quick text to them brought them headed back in our direction and 30 minutes later we awkwardly greeted them in all our sweaty, helmet-headed glory.  Swell. 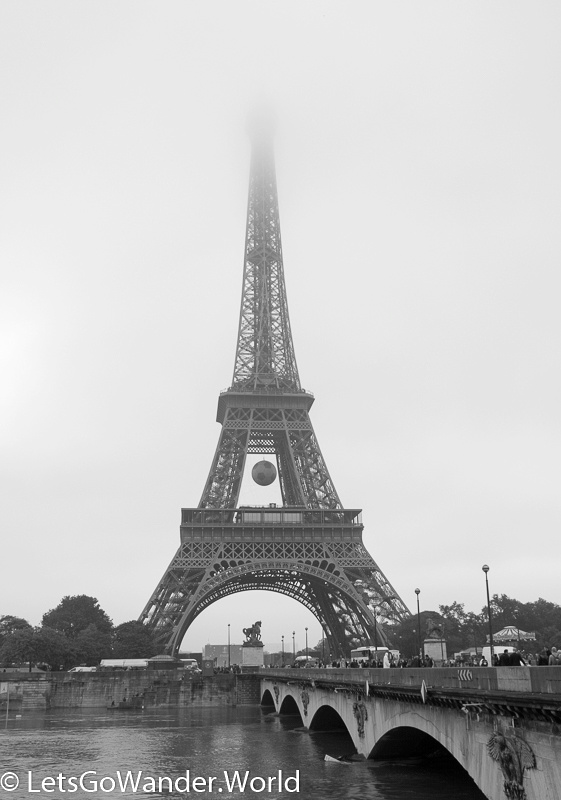 Once we were finally settled in the apartment, we headed out for a quick stroll around the neighborhood and picked up a bottle of wine and some pastries to top off the dinner we had at the Asian street food stall across the street.

The weather in Paris was a continuation of what we had seen over the previous week – foggy, misty and chilly.  I was beginning to wonder whether Europe was actually in the southern hemisphere and it was winter now.  On Saturday, we went to Versailles to tour the chateau and the surrounding gardens.  Given the petrol strike, the subway strike, the rail strike, and the flooding on the Seine river, it actually wasn’t too hard to get to Versailles and we enjoyed walking around the gardens and seeing the chateau.  The following morning we went down to the Eiffel tower as we had purchased reserved tickets to go to the top at 10:30 am.  Unfortunately, it was another foggy chilly day so the view from the top was uninteresting to say the least.  For the rest of the day, we walked around town.  First, along the Seine where all boats were moored since the high water kept them from fitting under any of the bridges.  Then visiting the (outside of the) Louvre because it was closed due to the flooding issues and also walking toward the Arc de Triomphe on the Champs de Elysee which was closed to car traffic due to the upcoming Euro soccer championships in Paris. 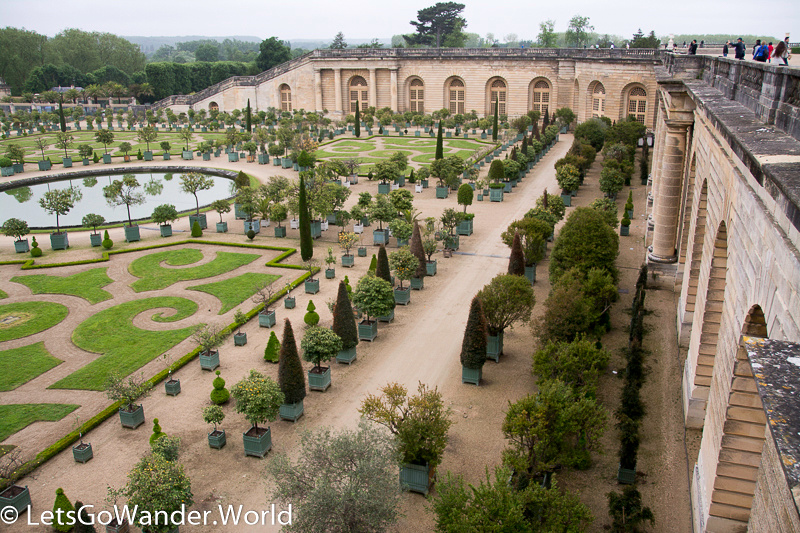 On Monday, we had to turn our apartment back over to its owners and get back on our bikes.  As we were just ready to pedal off, we were stopped by two Parisians (who apparently didn’t know each other).  One wanted to know about our trip and the other one was interested in Cisco.  We chatted with them for a while and they discovered that they had both visited Colorado Springs in the past.  They wished us bon voyage and off we went.  Navigating out of metropolitan Paris was similar to the trip in – busy roads with lots going on – but motorists tend to be very vigilant of bicyclists.  Once we reached the Seine river, we had to improvise our route as most of our pre-planned route turned out to be underwater.  We ran into construction, detours, and more flooding for the next 2 hours as we worked our way out of the suburbs. 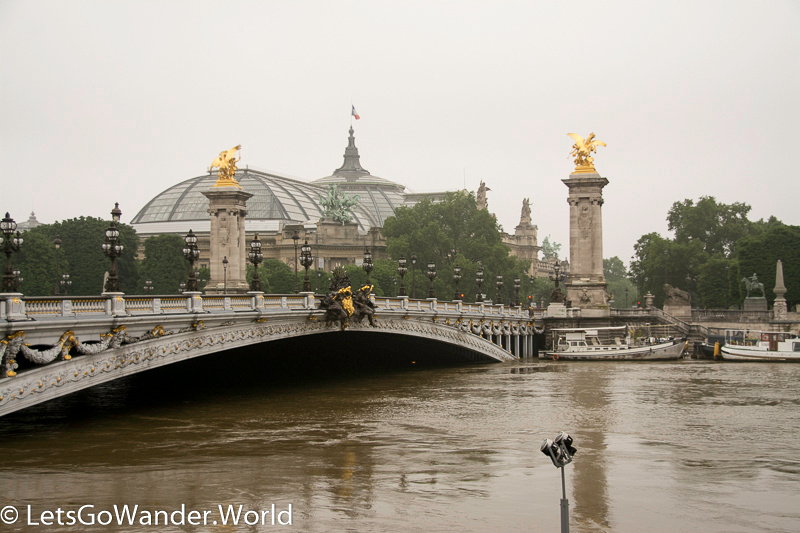 High water on the Seine river

On the whole, we enjoyed Paris, but a little sunshine would have been a welcome addition to the weekend.  Also, we have decided that for the purpose of this trip, we will probably avoid staying in the city center of any large cities (like Paris) unless our route happens to take us through the city center.  It’s too stressful trying to navigate through a city on these fully loaded bikes and staging the bikes on a busy city street is also logistically challenging.  All in all, a good time and also a good learning experience.

Mary Derry(non-registered)
It's so wonderful following you on your trip thru your blogs! You sure are making your way thru it all even with the weather not cooperating. The pictures are not only beautiful, they are so interesting. You are very brave, but even more so dedicated to doing this.
Keri(non-registered)
Miss you guys! What an adventure. I'm so jealous! Great photos Megan as always. Looking for a place to live by July 1st. So far no luck. Kasi said I could stay with her until I find something just right. Still seriously thinking about moving to Montana in the fall. Very interested in any creative cuisine you come across. Have fun, and look both ways before you cross the goat trail. Bahahaha...... Hi Barry.
Connie Hagen(non-registered)
Beverly forwards me everything you enter regarding your trip. I really enjoy reading about your day to day adventure and the pictures. I like to ride bike but not sure I could deal with all the circumstances you two do. Sounds like you are enjoying it and what a wonderful experience you are having. I love your dog!
Cathy Mosier(non-registered)
Beautiful photos Megan! Glad you guys are enjoying yourselves and that you're not letting the weather get the best of you. Love your 'adapt and overcome' attitude.

Best,
Cathy
Dad(non-registered)
Well I love hearing about your trip! And sometimes I am concerned. However you seem to be handling all sorts of difficulties as they come up. I am just a little jealous.
No comments posted.
Loading...