Getting to the Loire Valley

After leaving Paris, we had 5 days of riding to get down to the Loire Valley.  Originally, our plan had been to ride along the Seine river, but flooding forced us to change those plans.  The path along the river was mostly underwater as were a couple of the campgrounds that we planned to stay at.  So, instead we modified our route to ride on the roads instead.  The good news was that this made the mileage shorter than it would have been along the river.  The bad news was that a few of the roads had more traffic than we would have liked.

On the second day out of Paris, we stayed overnight in Fontainebleau.  This is a town that grew up around the Chateau of Fontainebleau and is located in the middle of the Fontainebleau forest.  Although the chateau was closed on the day that we were there, we were able to walk around the beautiful gardens.  Having visited the gardens of Versailles only a few days earlier, we enjoyed Fontainebleau for its lack of crowds and carefully groomed landscape.  The nice weather could also have played a role in our enjoyment as well.

The old town of Fontainebleau is a very walkable town with many cafes, bars and restaurants – many with outdoor seating.  For dinner, we found a pizzeria down a pedestrian street and sat outside to enjoy the nice weather and our wood-fired pizza.  Fountainebleau (the town) is home to a School of Mines as well as a prestigious business school, so there are lots of young people around (OK, just writing that makes me feel old), and also plenty of international students as well.  I had some nice pictures of Fountainebleau (the town and the chateau) but they were lost in the computer fiasco (more about that to follow).

The next two days passed without much news to report, except that our laptop decided to crap out on us and I came down with a cold.  Once we arrived in Orleans, we settled into our hotel room across from the train station.  When we aren’t camping, we have mostly been staying in Ibis hotels, which are a chain of mid-range business-oriented hotels across Europe.  What they lack in character and charm, they make up for in consistency and affordability.  They have comfortable beds, free wifi that actually works, decent breakfasts, and most of them accept dogs for a minimal charge.  They also have been great about providing a secure place to store our bicycles.

Ultimately, we ended up having to purchase a new laptop and sending the old one home (which was an adventure in and of itself).  Of course, in France the computers all speak French.  Go figure.  We figured out how to set the language as English, but we still have a keyboard with the keys all in the wrong place.  It makes typing fun.

On Saturday, we had booked a full-day tour with Odyssee en val de loire.  Although I was tempted to cancel and stay in bed all day, I rallied to the occasion with some encouragement from Barry.  Stephane, who owns Odyssee picked us up in her van at 9 am.  Originally, another couple was to join us on the tour, but they cancelled as a result of the train strikes since they were planning to take the train down from Paris, so we ended up having a private tour all to ourselves. 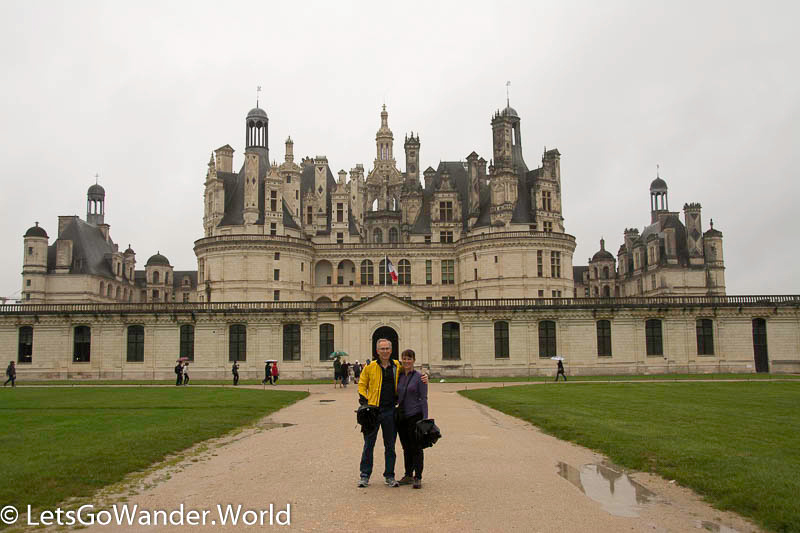 Here we are in front of Chambord during a small break in the rain showers.

We started out at Chambord which is a chateau built by King Francis I.  He built the chateau as a hunting lodge starting in 1519, although it is enormous in size with 77 staircases, 282 fireplaces and 426 rooms.  Also, the park that surrounds Chambord is enclosed by a wall that is the same circumference as metropolitan Paris – 32 kilometers long.  One of the highlights of Chambord is the main central staircase which is a double spiral staircase with hollow inner column.  It is quite impressive to see. 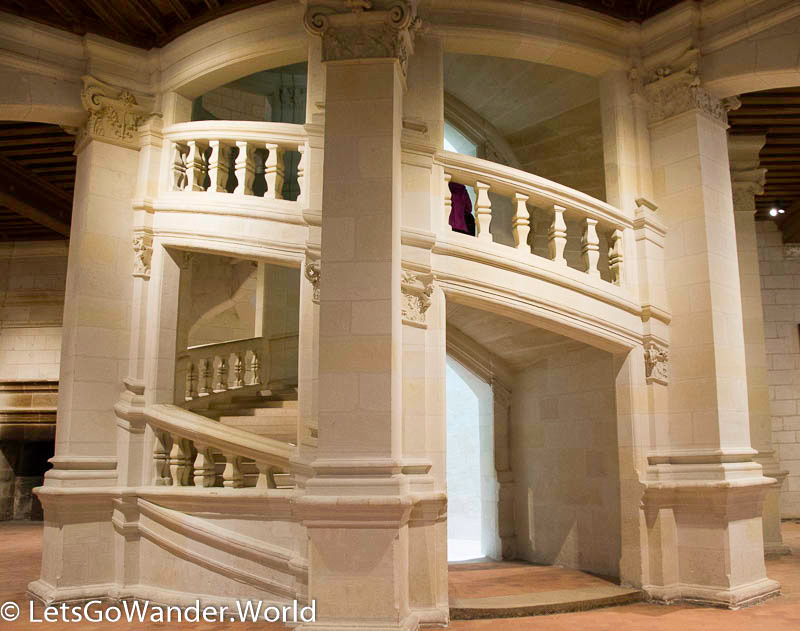 Up until a few days prior, Chambord had been closed as it was surrounded by water due to flooding but luckily that didn’t impact our visit at all.

The second stop was Cheverny.  After a fabulous lunch of savory crepes, we visited Chateau Cheverny which is privately owned.  The family resides in one wing of the chateau and charge an entrance fee to tour the rest of the chateau as well as the grounds.  I suppose it’s a good way to afford the unbelievable amount of upkeep involved with these properties.  Cheverny is completely furnished and decorated based on the period and it’s an impressive chateau with beautifully landscaped grounds as well. 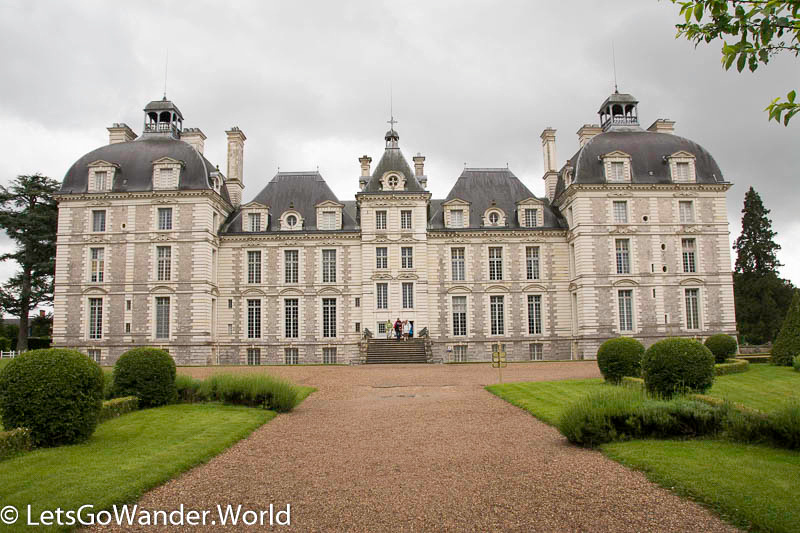 The final stop was Chenonceau which was built in the 16th century over the river Cher.  King Henry II provided the chateau to his mistress Diane de Poitiers, much to the irritation of his wife Catherine de’ Medici.  After his death, his widow Catherine removed the mistress from the property and took it over for herself.  This chateau is also privately owned today and was used as a hospital during WWI and in WWII it served as a passage across the river for the Resistance, allowing people to escape to the free zone on the other side of the river. 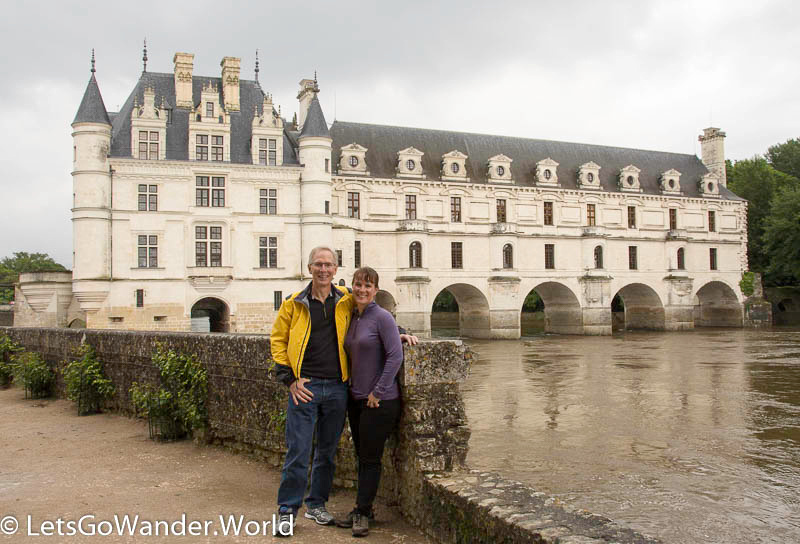 Along the way, Stephane plied us with lots of historical and cultural information about the region and also mapped out a self-guided walking tour to take of the city of Orleans the following day.

During the walking tour, we could see that the Loire river was still quite high.  Hopefully our route over the next few days will not be flooded, but we still continue to see more than normal amounts of rain here in France.  Orleans is where we transition from the Eurovelo 3 route to the Eurovelo 6 route which follows the Loire for the next few hundred miles.

Sorry for the gap in blog posts – we are just now getting everything back on our computer to be functional again.  We’re hoping this laptop lasts a little longer than the last one did.

Kevin Turntine(non-registered)
I did the same tour of the 3 chateaus in 2001 and it looks as fantastic now as it did then. I think I have the same picture of the double-spiral case too! When I had to type on my inlaws laptop/keyboards, I had the same challenge - where in the heck did they put? And some of the extra characters too through me off. Prior to that I thought the QWERTY layout was a bit more universal...
Keri Halvorsen(non-registered)
I want to live in a castle. I wonder if there's any for sale in the Montana Mountains. Zak says thank you for the graduation card & the cashola! Very hot & humid around here. I hate it! Have Cisco stiff me out some black truffles, Yummy! Talk to you soon.
No comments posted.
Loading...