The First Month: Expectations and Reality

Just over one month ago, we arrived in Frankfurt ready to begin our adventure.  Since then, we have ridden 23 days covering just over 1100 kilometers in that time.  That puts us a little less than our targeted average of 50 KM per day, but we planned for some lighter mileage in the first couple of weeks.  Over the course of these last few weeks, there have been a few things that have ended up being a surprise to us – much different than our expectations.  I’m sure there will be more of these surprises to come, but here’s what we’ve found so far.

This is a big one.  The weather has been – in a word – lousy.  We can count the number of days with sun during the last month on one hand.  As spring has turned into summer at home, I have seen (with envy) friends posts photos on Facebook of outdoor fun in the sun with flip flops and shorts.  Meanwhile, we are still wearing long pants and long sleeve shirts most of the time.  I am told that this is atypical for June in France, where normally temperatures are warm and there is less rain.  Luckily, we have been fairly fortunate with the rain.  We can also count on one hand the number of days that we have had to ride in more than a fine mist.  Most of the time we have managed to get to our destination prior to the rain showers and have only had to ride in a downpour on a few days. 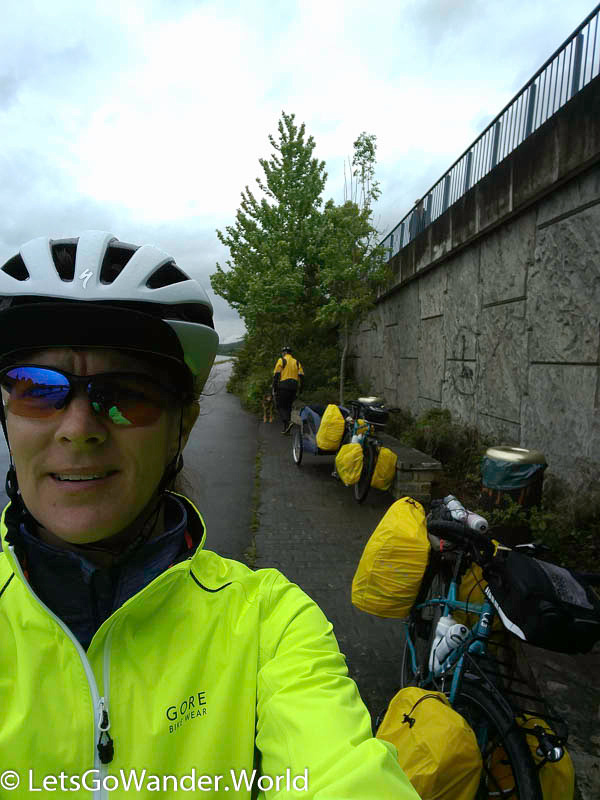 Riding in the rain

Over the last couple of days, summer has made a sudden appearance in France and temperatures have soared into the 80s and 90s.  Not to be picky, but it sure would have been nice to have those spring temperatures in between!

We decided to start with the Eurovelo routes for our route planning.  There are 15 Eurovelo routes that stretch all over Europe and they are basically a collection of local and regional routes that have been pieced together into longer routes.  Some Eurovelo routes are more developed than others – they are rated “Planned”, “Not Fully Realized”, and “Fully Realized”.  The difference between “Fully Realized” and “Not Fully Realized” became clear on the first part of our trip where we followed Eurovelo 3 from Aachen to Orleans.  Eurovelo 3 stretches all the way from northern Norway to Santiago de Compostela in Spain which is why it is called the Pilgrims Route (Santiago is at the end of the Camino de Santiago pilgrimage route).  Several of the cycle tourists we met on the route were on their way to Santiago.  The part of EV3 that we took was all rated as “Not Fully Realized” – we found that this can mean anything from perfect (nice paved path with good signage) to virtually non-existent.  And there is really no way to know ahead of time what to expect.  It’s possible to use Google Maps street view to look at some roads along the way, but Google Maps doesn’t cover many of the routes we are on.  As a result, some days are easy navigating days with nice road surfaces, others are on dirt paths that are OK in dry weather, and still others are difficult to nearly impossible to ride on. 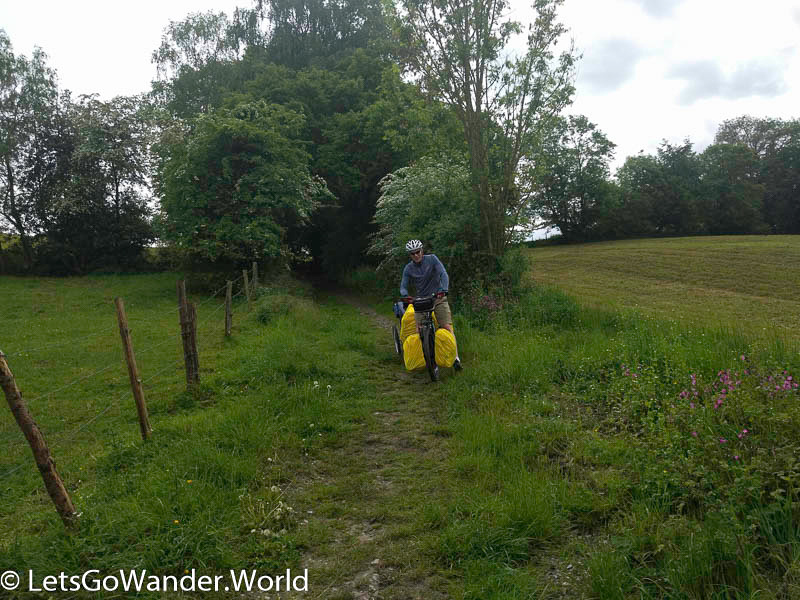 Is this the route?

The only thing that we can really do about this is to be flexible and adapt as we go.  There have been a number of days when we have abandoned our original route and figured out an alternative along the way.  In France it’s good to know that the less busy roads begin with D (like D70 or D978) whereas the busier highways begin with either A or N.Once we arrived in Orleans, we started following Eurovelo 6 which will take us all the way to the Black Sea.  Of all of the Eurovelo routes, it is one of the most developed and most traveled one.  Also known as “The Rivers Route”, it follows the Loire, the Rhine, and the Danube rivers.  So far, the part of the route we have been on is all rated “Fully Realized” and it makes a big difference.  Most of the route has been on bike paths that either follow the Loire along the levee or follow a canal near the Loire.  The route is well marked and in good condition. 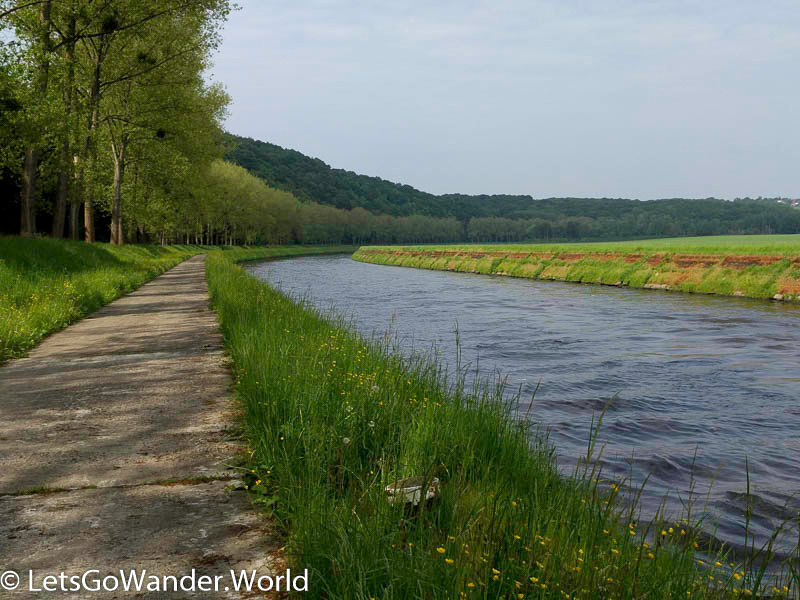 Path along a canal

The French are not snobs

The French seem to have a bit of a reputation in the US for their snobbery, especially regarding the French language.  Our experience has been quite different.  We have found the French to be laid-back, helpful, friendly people.  Barry and I don’t speak any French, although we’ve picked up a few words and phrases along the way.  And, in the areas that we are traveling through, we often run into people that don’t speak any English.  However, they are always willing to work with us or help us out – using sign language or whatever means to get the point across.

Also, we have found that people go out of their way to point us in the right direction, help us through a tricky interchange, help push our bikes up a short steep grade, or offer help in getting around a flooded area.  The other day we stopped for a moment to rest and someone stopped to ask if everything was OK.  We also have people regularly stop us along the way to ask us where we are from and where we are headed.

On the bike paths, it is uncommon for someone not to offer up a “Bonjour” and or a wave as they pass – whether they are walking, biking or running.  And sometimes we get an even more enthusiastic double thumbs up greeting from those who are impressed with our heavy load.

Where does all the time go?

Given that we are only averaging a relatively short 50 KM per day, I had envisioned having all kinds of time to do things like read and write, go for long walks, and explore things along the way.  While we have some time to do those things, it’s not nearly as much as I had thought it would be.  Where does all the time go?  Well, the riding itself just takes longer than we thought it would.  While we average the speed that we thought we would when cycling, we end up spending more time stopping to check the route, getting off-course, doubling back, and re-routing when necessary.  Add in a stop for lunch and a couple more shorter stops along the way, and we are usually on the road for between 4-5 hours. 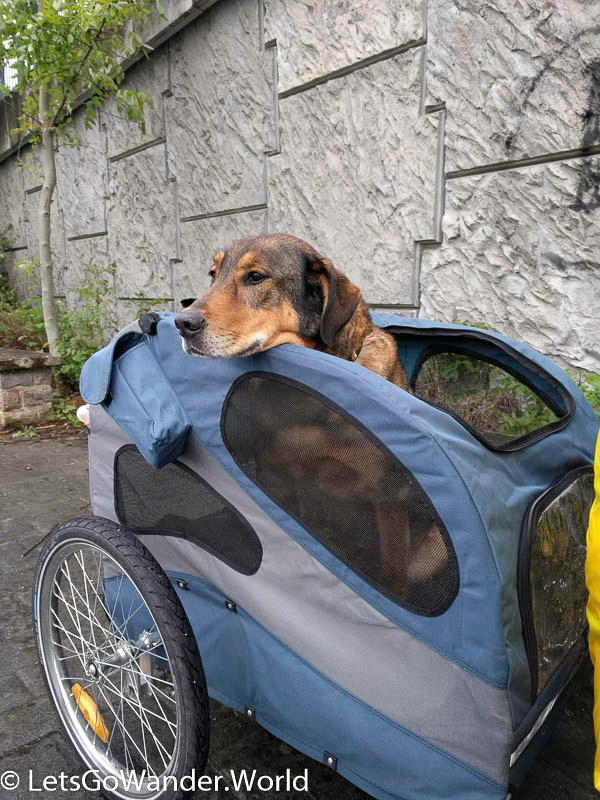 Cisco in his Chariot

Then, there is the time spent packing and unpacking the panniers and loading and unloading the bikes.  This takes more time than you might think.  It’s faster when camping than when hoteling, but either way we spend a good 2 hours with these activities every day.  Then, once we are at our destination, we have to figure out what we are going to eat.  Usually, this involves a trip to a local grocery store - sometimes a short walk, other times a slightly longer bike ride – where we will pick up something for dinner (if not eating out) and also something for breakfast and lunch the following day.  There goes at least another hour.  We also generally have at least a little laundry to do almost daily, which we either do in the sink or occasionally in a washer/dryer at a campground.  Another 30 minutes.  So, at the end of the day, there’s not nearly as much time to just sit and relax as we may have thought.  Oh well, poor us.  This is also why the rest days are good. 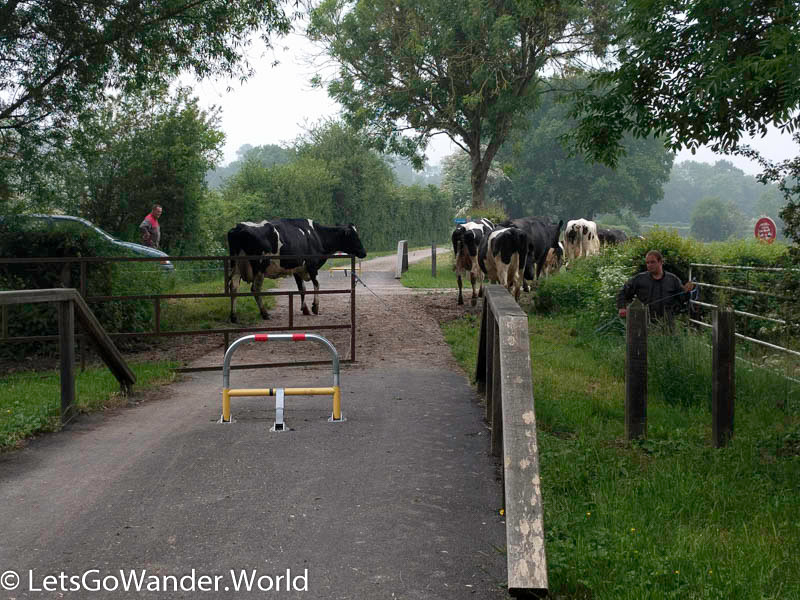 So far, despite those things that didn’t line up with our expectations, we are having a good time.  We have both been happy to find that our bodies are holding up pretty well – I think we both half-expected to be sidelined by a knee problem or a bad back by now – but that hasn’t been the case.  At this point, we don’t see any reason why we shouldn’t be able to make it to the Black Sea as intended.

Steve Wilson(non-registered)
Great updates. I've fallen behind but I'm all caught up now. I guess staying flexible is the key. Hope the weather has improved.
Dad(non-registered)
Lovely post Megan. Really gives your readers a feel of what you are doing. I am in California for a one day Landmark class.Back home on the 24th.
Bev Rost(non-registered)
Love reading your posts.....such beautiful scenery and what an adventure......What is your estimated arrival time at the Red Sea....Cisco is so cute!
Christine(non-registered)
What an amazing journey. And love all the pictures. Wish I was there right along with you!!!!
No comments posted.
Loading...