Let's Get This Show on the Road 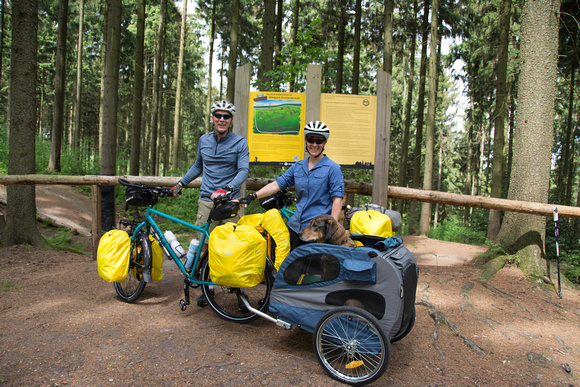 Day 1 - Just over the border of Belgium

On Saturday we set off from Aachen at around 10 am.  The day was warm (but not too warm) and sunny.  We found our way out of town without too much trouble, and soon we found ourselves on a bike path leading over a hill with a pretty steep grade.  It felt a little soon for the legs, but we managed.  Before long, the standard greeting on the path turned from “Guten Morgen” to “Bonjour” and so we knew we had crossed over the border into Belgium.

The first day was different than we expected – mostly rural countryside and almost exclusively on a hard packed dirt path.  At one point the dirt path deteriorated into something resembling more of a goat path, but luckily that was short-lived.  The first half of the day had a lot of undulating hills and turned out to be a pretty good workout for the legs.

During that first day, there were two words that randomly kept coming to mind – the first was pastoral because of all of the pastoral green rolling hills, old stone houses, and steepled churches with ringing bells.  The second word was jettison – which was what I was wanting to do with about half of the gear in my panniers.  This was really the first time that we had ridden totally FULLY loaded and it was an eye-opener.  We had planned to do a 3 day test ride back home to check out all of our gear and make any adjustments as needed.  However, it snowed non-stop for the 3 days that we had set aside for the test ride and we just weren’t equipped for snow and freezing temperatures so we had to skip it.  I had previously questioned if we needed bikes that were so beefy (read heavy) but now I am so glad for the bikes that we had built with their sturdy frames and components.  The fully loaded bikes are large and awkward to maneuver and take some getting used to, but by the end of the first day I felt much more comfortable than at first. 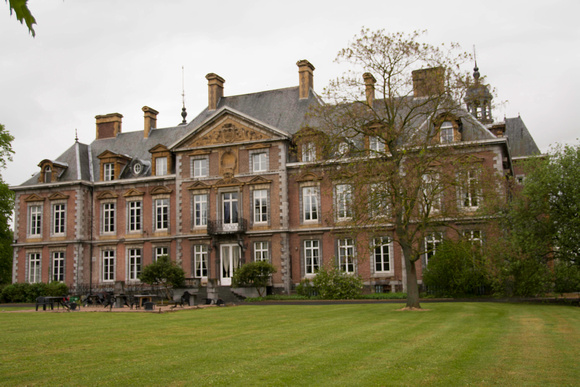 We camped at a campground near the town of Soumagne for the first night.  I walked into town to pick up some pasta for dinner while Barry took Cisco on a walk.  The campground was somewhat like a resort with a pond with a walking trail and a water park, not to mention hot showers, bathrooms, and laundry facilities.  Most of the camp sites were obviously rented on a long-term basis with trailers parked on them permanently – presumably people use them as their weekend getaways.  There were a few other trailers and RVs just staying for the night and we were the only tent campers.  It’s still pretty early in the season.

The second day started out with cloudy skies and the promise of some rain.  In fact, it started to rain just as soon as we thought about taking the tent down.  After we’d packed up and got going, the road immediately started out with a 10% grade hill that nearly did my legs in.  Not a great way to start the morning.  As we went along, it was clear that day 2 would be very different from day 1.  We were on roads for most of the day, the weather was wet all day with periods of heavier rain, and navigation proved a little difficult due to several closed roads and paths.  But, we finally pulled into our hotel for the night around 3:30 pm.  Our hotel was an old 18th century chateau which was very charming and comfortable, squeaky floors and all. 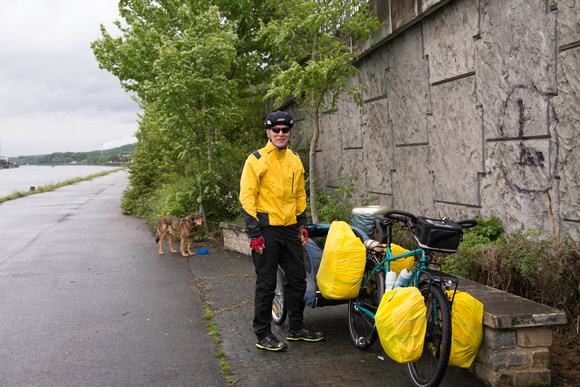 On day three, the rain slowed to a drizzle and then eventually stopped although the temperature stayed in the lower 50’s and the wind kicked up some.  After heading out mid-morning, we had to take a detour which added about 5 miles to our route.  Hats off to the Belgians as the route was very well marked today which made navigation much easier.  Also, we have finally figured out the navigation features of our Garmin computers and gotten all of the options set up correctly which should help us too.   Eventually we picked up the bike route along the Meuse river and followed it to Namur, home for the next two nights as tomorrow is our first rest day.

The first three days have been good and physically challenging.  Today we both felt a bit sore and are happy to have a day off tomorrow.  Cisco agrees.

Mary Derry
What the 3 of you are taking on is very incredible! I look forward to following your journey. Your blogs are so interesting and well written Megan, I can see a book at the end of this. Safe travels and keep on biking!!!
Steve Wilson(non-registered)
Great update! It's fun to read about this amazing trip!
Michael Kriz(non-registered)
I am going to live vicariously through you two as this progresses. I admire the commitment to your soul. I didn't think about your dog, and I am so glad he is along for the ride. Barry, you look amazingly fit. I wish you "fair winds and following seas" for this journey. You are taking this from a vantage point that few will experience. You are going to meet the people. When I was in the Navy, I traveled a lot of places, and found that one "temple" was a lot like the other, but the local culture as experienced through my interaction with the local people was 100 times more rewarding. I will read faithfully.