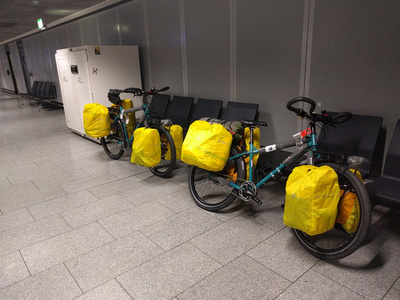 Putting the panniers on the bikes at the Frankfurt airport

Well we made it to the starting point of our bike tour – Aachen, Germany.  Two days ago we embarked on our journey from Denver to Frankfurt.  My parents were gracious to help us get all of our stuff to the airport and checked in.  I had been dreading this day for weeks – envisioning the spectacle that we would be at the check-in counter.  Not that we weren’t a spectacle with our 2 bikes, 1 dog, huge kennel and 3 huge bags, but the Lufthansa agents were unfazed and very kind to us, especially with regards to our dog.  This was his first flight so we had spent a couple of months acclimating him to the kennel giving him treats whenever he went in on his own.  So, at the airport he was happy to hop into the kennel as asked.  We elected to check the bicycles unboxed as Lufthansa’s website indicates that this is preferred.  I was a little nervous about how this would go, especially given how they were manhandled by the guy that came to get them, but I knew that the bikes were built to be durable. 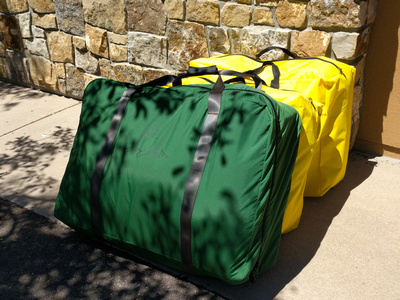 Special thanks to our friends at Seco de Mexico for making this awesome custom bag for our dog trailer!

Upon our arrival in Frankfurt, our 2 bikes, 1 dog, huge kennel and 3 huge bags came through intact and Cisco was quite happy to see us.  We had to keep him in the kennel until we passed through customs (he was not so happy about that).  The customs officials were supposed to scan his microchip and review and endorse the paperwork that we had our vet fill out (twice to get everything correct) and the USDA certify.  But in the end the customs officials didn’t even want to look at our paperwork, or scan the chip, or even look at what we had in the huge kennel.  I hope that not having the customs endorsement doesn’t cause us problems later down the road.

There was another couple at Frankfurt airport that were also starting a bike tour, only they were starting right from the airport so they spent an hour or so assembling their bikes and gear in the luggage claim area.  However, for us the next item of business was to travel by train to Aachen.  Although dogs are universally allowed on pretty much all German trains, bicycles can only travel on certain trains so we had to take 3 trains in order to reach our destination.  We traveled along the Rhine river which is lined with quaint towns and ancient castles. 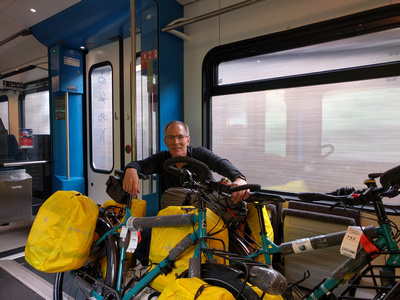 Riding the trains with our gear

Transferring between trains was logistically challenging with all of our stuff, but we somehow we managed and we finally arrived at our hotel in Aachen around 8 pm.  It was a long day but now we have a day in Aachen to do some sightseeing and preparation before we start riding on Saturday.

Keywords: Aachen, Frankfurt, logistics, taking bikes on a train in Germany, traveling with a dog

Sylvie Pacaud(non-registered)
Hi,
This is Sylvie, French colleague of Barry.
I wish you a happy trip with Cisco.
If you go near Carquefou, please visit us. We will offer you a cafe or other thing and of course water to Cisco.
Martha Runnette(non-registered)
Hey Megan! This is awesome and I didn't realize Cisco was coming too! What a trouper he is! Can't wait to see where you are next ... have fun!!
LetsGoWander.World
Thank you Andrea!
Andrea(non-registered)
Hi Megan,
this is Andrea, a former colleague of Barry. You created a wonderful website! I absolutely admire it. Welcome to Germany :-) i am glad Cisco has the flying stress behind him and now is with you again :-)
Have a great trip, if there is anything I can help, just let me know.
No comments posted.
Loading...