Trip Wrap Up: 2016 Europe Cycling Tour By The Numbers

Well, we are now safely back from our Europe cycling tour.  The trip back was long but pretty uneventful.  We took a very long (12.5 hour) train ride from Zagreb, Croatia to Frankfurt, Germany.  We had booked the tickets a couple of months in advance because you had to reserve the spaces for the bikes and there were exactly 2 bike spaces on the train.  On the morning of departure, we left our Zagreb apartment while it was still dark since the train left just before 7 am.  As luck would have it, the car where the bikes would normally go had been substituted with another car without any bike spaces.  Oh well, we just stuck them on anyway and no one said anything about it. 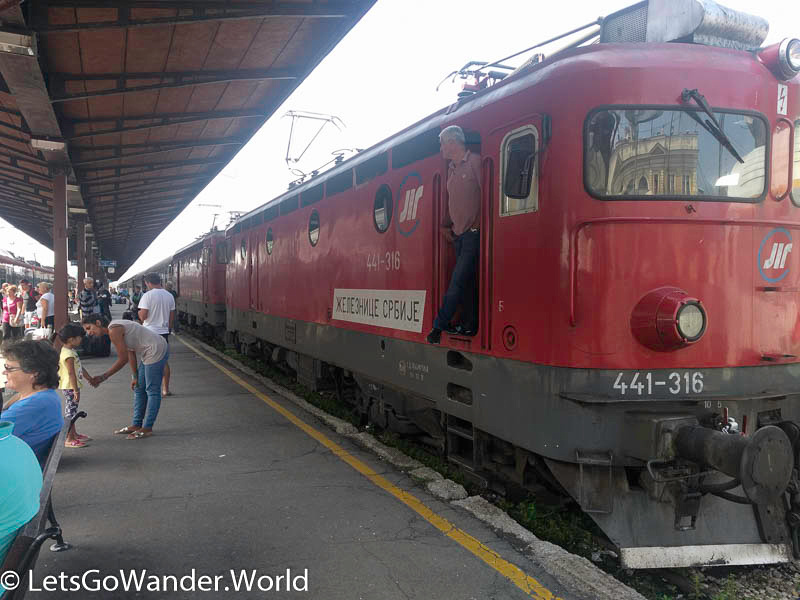 At the train station

We ended up sharing our compartment on the train with a family who was Serbian and Croatian but lived in Germany.  Luckily they loved Cisco and kept him (and us) well fed on the entire train ride.  They also shared some pictures of their trip to Croatia where they had attended the wedding of a relative.  Croatian weddings are 3 day spectacles filled with food, music and dancing.  They definitely helped the time pass more quickly on the train ride. 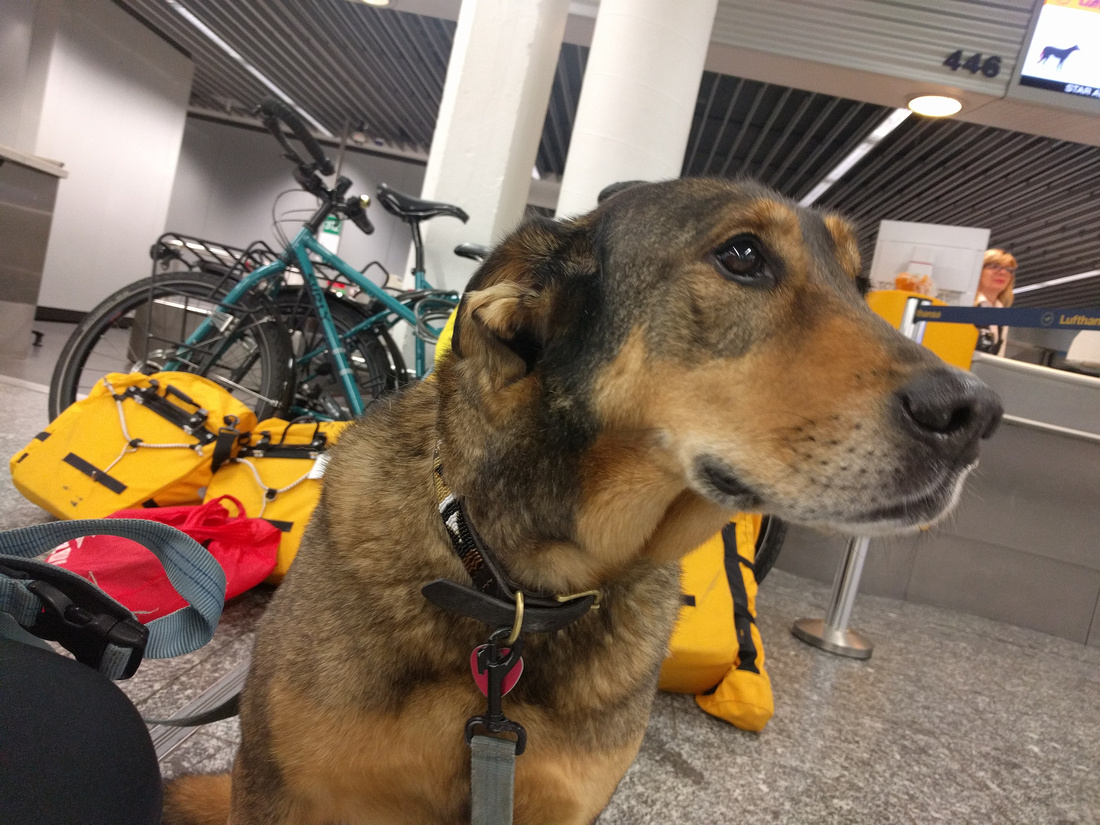 Getting ready to check-in at Frankfurt airport.

Once in Frankfurt, we transferred to a local train to the airport and checked into a hotel at the airport.  Before leaving, we obtained a kennel for Cisco to travel in, took him for a final walk, and then headed to the “bulky items” check in.  I noticed that I felt much more relaxed this time – both about putting Cisco on the plane and about checking our (unboxed) bicycles.  Everything showed up as planned in Denver and Cisco was thrilled to see grandma and grandpa at the airport.

I have always been somewhat of a data geek – tracking things in spreadsheets and this trip was no exception.  Below are some random facts, statistics and reflections from our trip that I compiled.  These are based on the bicycle-touring portion of our trip only. 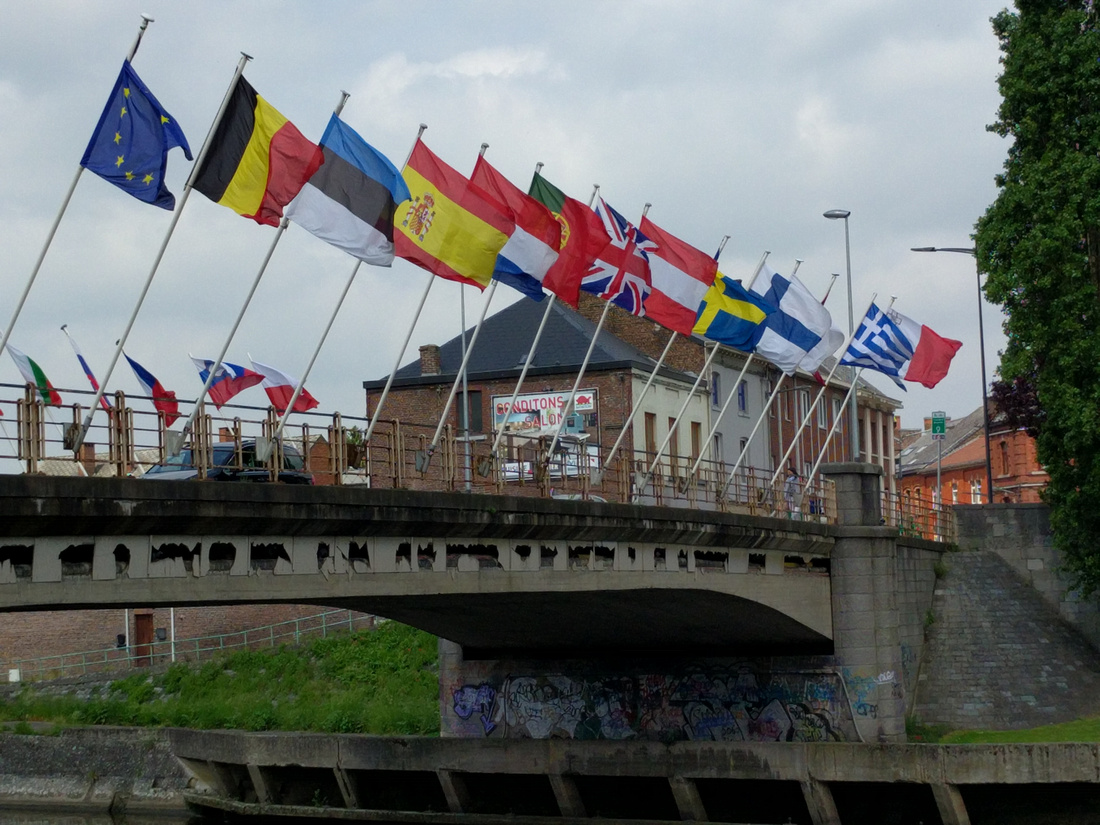 Flags of the United Nations

Favorite Country Visited:  Croatia was a beautiful country to visit with stunning coastlines and national parks, great seafood and good wine.  The Croatian (and Serbian) people were also very open, generous and kind.  Also, since English is widely spoken in Croatia, communication was less of a barrier than in some other countries.

Favorite Country for Cycling:  France has a great network of cycling routes including the Loire route which is about 800 kilometers long and mostly on bike path.  France also has many forests with gravel paths which make for great cycling as well.  Add in the great food, superb (and inexpensive) wine, and France makes a great country to explore by bicycle.

Croatia is certainly a beautiful country to visit!

Total Elevation Gain:  51,797 – Since much of our route took us along rivers and canals, most days were relatively flat.  Our top five days for elevation gain were all in Croatia.

Most Difficult Day:  Crossing from Rijeka, Croatia over a ridge to the Istria peninsula - 3612 vertical feet including a 10-mile continuous uphill stretch with many sections between 10% and 16% grades.

Total Nights Camping:  We spent 24 nights camping, either in our tent or in some kind of rented accommodation at a campground.  The remaining nights we stayed either in hotel rooms (71 nights) or private guesthouses or apartments (37 nights). 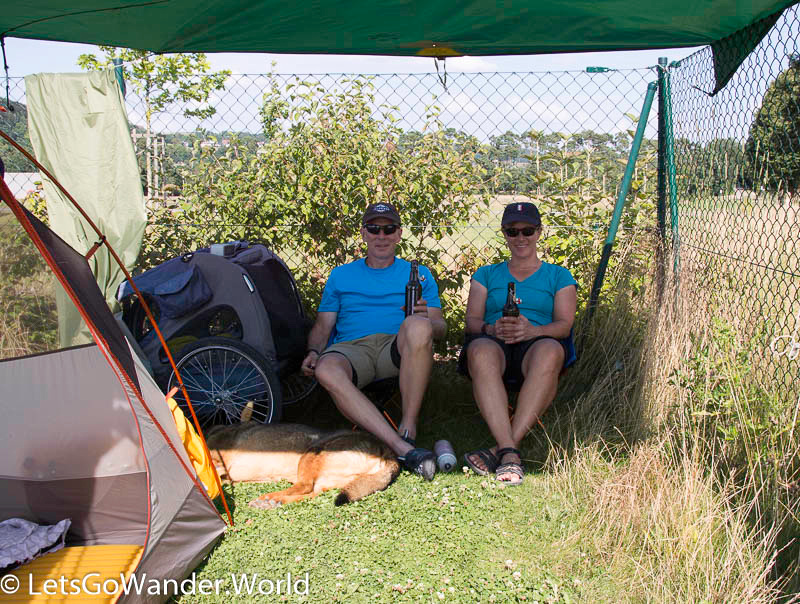 Enjoying a cold beer in the (diminishing) shade after a long ride. 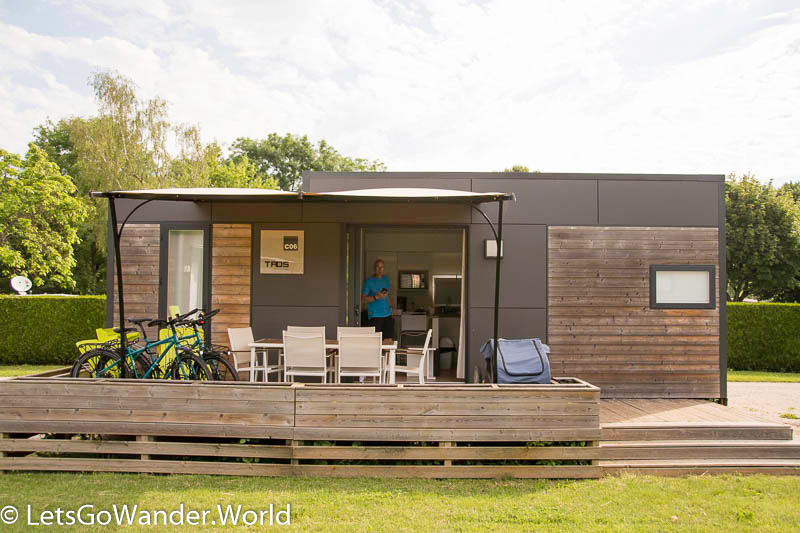 Mobile home accommodations in a campground near Beaune, France. 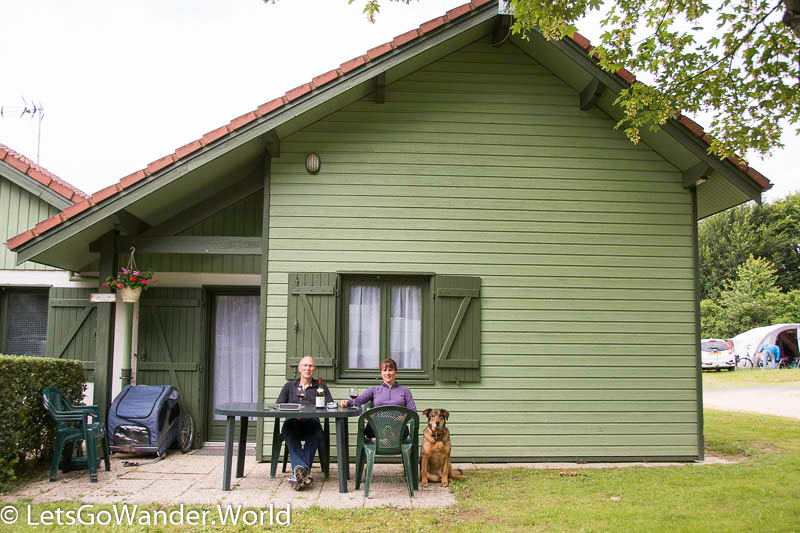 Bungalow in a campground in Bourbon-Lancy, France.

Gross Vehicle Weight:  A whopping 325 pounds – Fully loaded with gear, my bicycle weighed in at a hefty 125 pounds.  Barry’s bicycle came in at about 100 pounds plus another 100 pounds worth of dog and trailer.  This was one of the most frequently asked questions we had on our tour – when asked how much do your bikes weigh, our typical answer was “too much!” 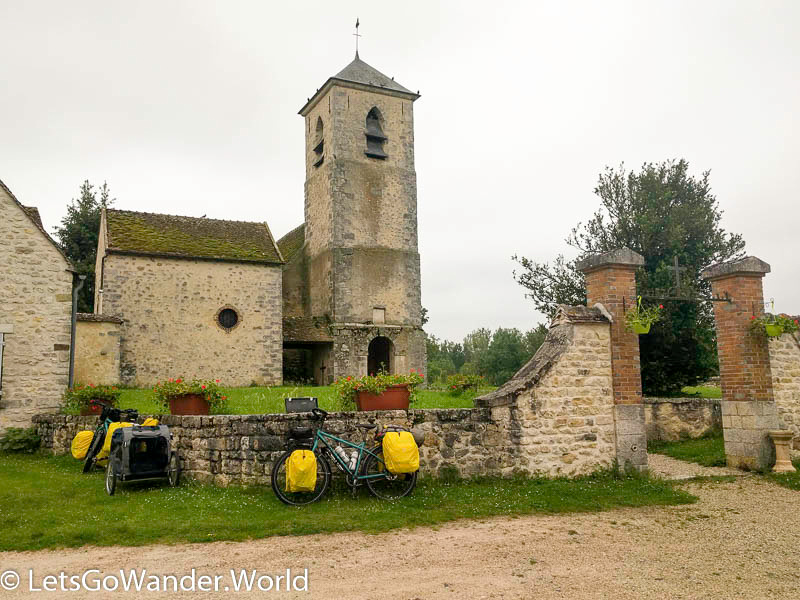 We often stopped at churches or cemeteries to rest because they are peaceful places and usually had somewhere to sit.

Other Bicycle Maintenance Issues:  Barry changed the brake pads on our bicycles around half-way through the trip.  These disc brakes wear down very quickly when riding in rain or mud which we did a fair amount of during the first half of the trip.  By the end of the trip, Barry noticed some discoloration on his disc brake rotors indicating that they had overheated and would need to be replaced.  This was a result of towing the extra weight of the trailer and needing to brake continuously while descending steep grades. 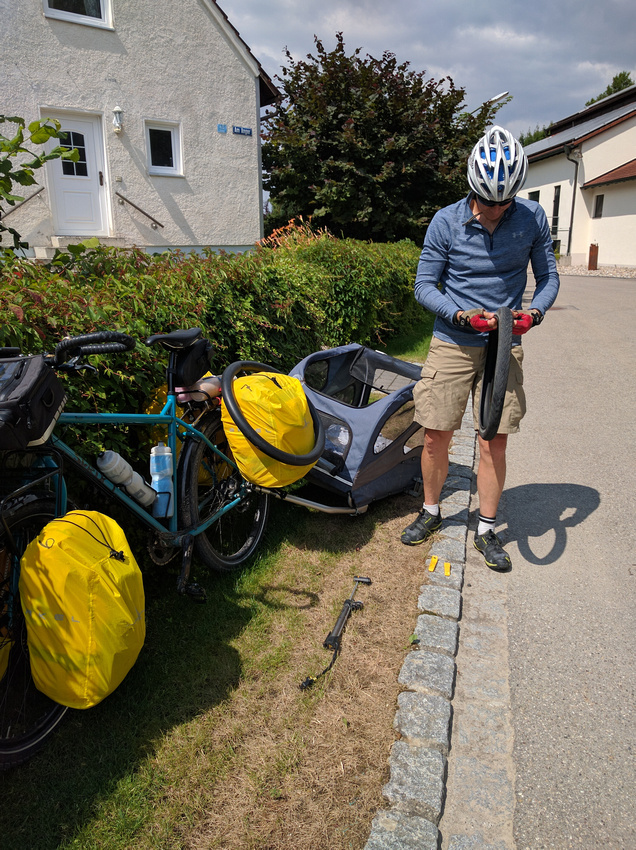 Barry fixing a flat on the trailer

I have read that many other cycle tourists in Europe end up with broken spokes due to cobblestones or some other rough conditions.  Although we were prepared for this, we did not have any broken spokes or really any other mechanical issues with the bicycles.

Scoops of Gelato Consumed:  Hmmm, I don’t have the actual number here but I would guess that it’s in the vicinity of 120 scoops total.   Yum.  Good thing we were burning so many calories every day! 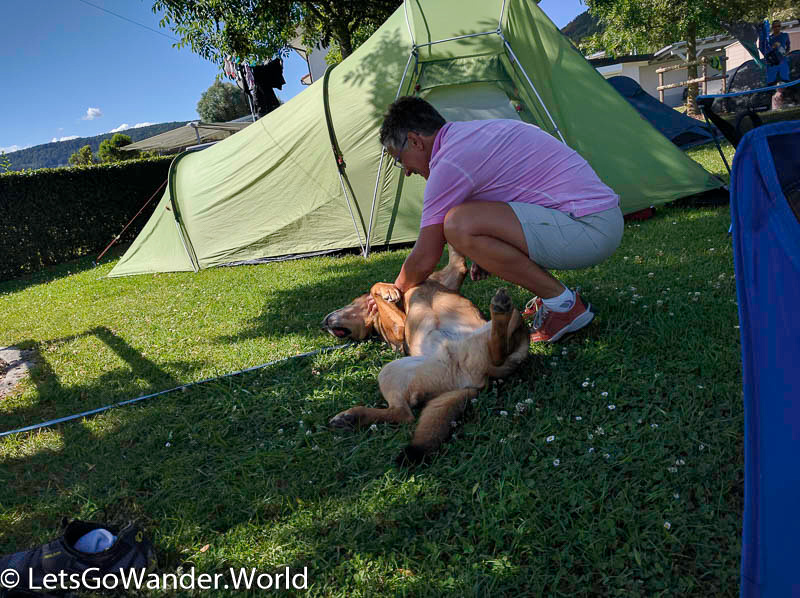 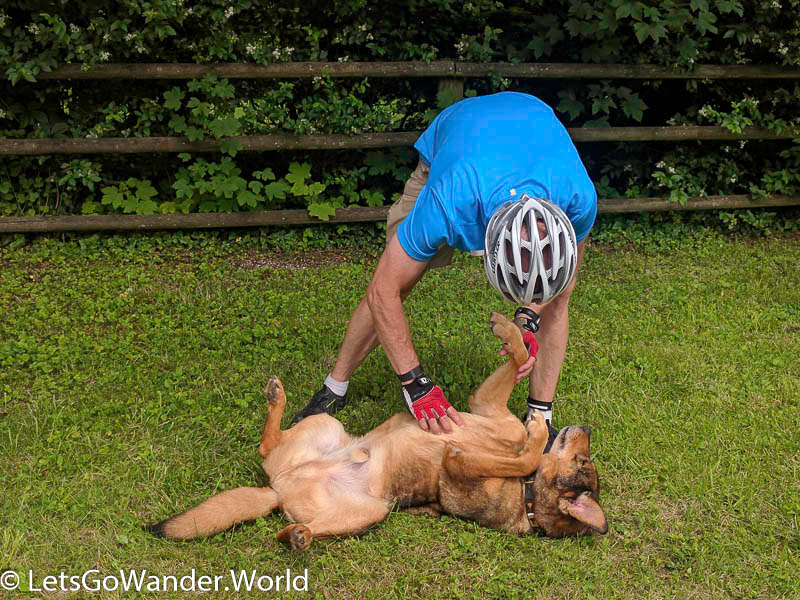 An interesting statistic would be the number of Facebook pages (not including mine) that Cisco has been featured on.  So many people stopped to snap pictures of Cisco as he went by in his chariot, we referred to them as Cisco’s paparazzi.

Injuries Sustained:  Nothing major…  We were both using clipless pedals (which for you non-cyclists reading means that your feet are actually secured to the pedals with clips that you have to twist your feet to get out of).  We both had a couple of incidents of tipping over without successfully clipping out of the pedals first resulting in scraped elbows and knees.  Go ahead, laugh all you want…

At the beginning of the trip I had some difficulty getting used to maneuvering my bike with all of the gear and I kept running the pedals into the back of my legs to the point where my calves were covered in bruises.  It got so bad that Barry said that it looked like I had the plague, so I started to refer to them as my “plague legs.”  Luckily, by the time the sun started shining on a regular basis and I could wear shorts, the bruises had mostly faded away.

Some reflections about our trip

The best aspect of our trip for me was the cycling.  I have always loved cycling, but this trip reminded me just how enjoyable it can be.  It also reminded me how much more enjoyable cycling is when you are really in shape for it.  We went through some areas of Europe that we would never have visited otherwise and it was a great way to see lots of sights.  It’s very different than zooming by in a car or a train. 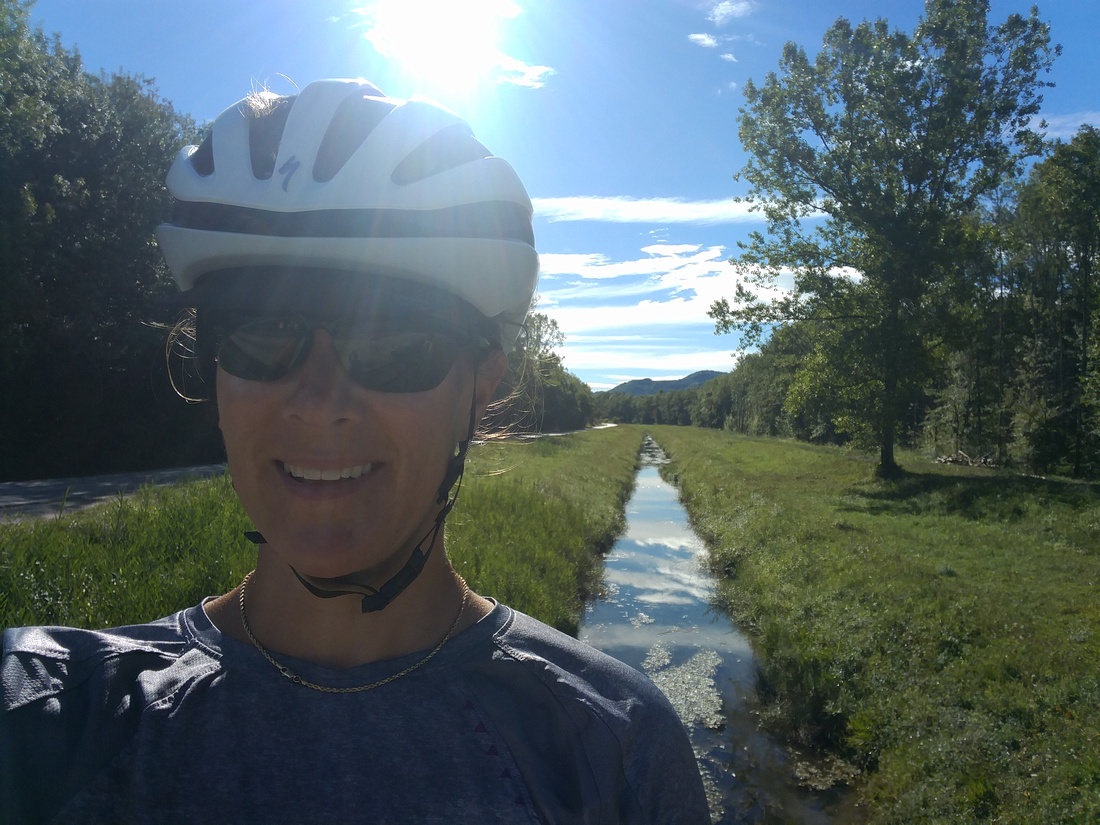 A day of cycling in Europe sure beats any at the office.

I also really enjoyed meeting and talking with people along the way – both locals and travelers from other countries.  This was the one aspect of the trip where language was most often a barrier since it’s hard to carry on much of a conversation without a common language, and sometimes this left us feeling somewhat isolated.  Obviously, it would be difficult to learn every language spoken in Europe, but I decided that I would like to spend some time learning German as this seems to be commonly spoken as a second language.

One of the biggest adjustments for me was making a spectacle of ourselves everywhere we went.  I have always loved people watching but I am certainly not used to being on the “watched” end of the activity. However, as you might imagine, everywhere we went people stared.  We would have gotten enough stares just with our loaded bicycles, but the addition of the dog in the trailer took it to a whole new level.  Pulling up to our hotel, people would watch with great curiosity as we went through the ritual of unloading the 8 panniers from our bike racks; packing up our 2 handle bar bags, 8 water bottles, bike pumps, and GPS computers into a bag; unloading Cisco and his bed from the trailer and folding it up into its own bag; and then carrying all of this stuff up to our room.  Every time we went through this, I was amazed at how we actually managed to get anywhere with all of this stuff!  I can only imagine what everyone else thought.  But, by the end of the trip I found that I was no longer fazed by this.  It was just all part of the routine.

Now that we are back home for a bit, we are formulating our plan for where to go next.  Stayed tuned for more adventures to come!

Julia Newsome(non-registered)
What a pleasure to read about your bike trip - I especially love the pictures of Cisco! I look forward to reading more!
No comments posted.
Loading...