The Waterfalls of Croatia

Croatia has two national parks that are known for their beautiful waterfalls – Krka National Park and Plitvice (pronounced PLEET-veet-seh) National Park.  The latter is the more well-known as it is designated as a UNESCO World Heritage site, but Krka is also quite beautiful and receives well over a million visitors annually.  We started our waterfall tour at Krka on a beautiful, sunny October day. 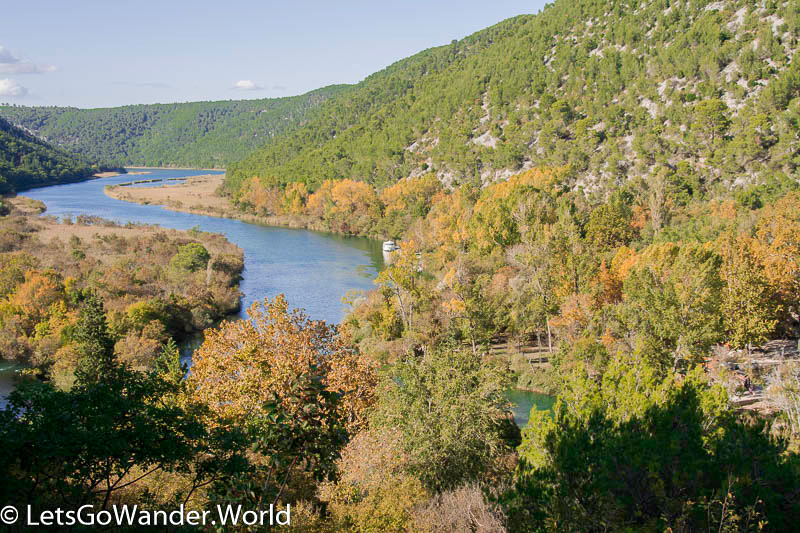 The Krka river just downstream of the National Park

The air was warm with just a hint of the briskness of fall.  October can be hit or miss with the weather in Croatia, but it’s a great time to visit because most of the tourist amenities are still open but the crowds are significantly smaller than in peak season.  After October, parts of both parks close down until the spring. 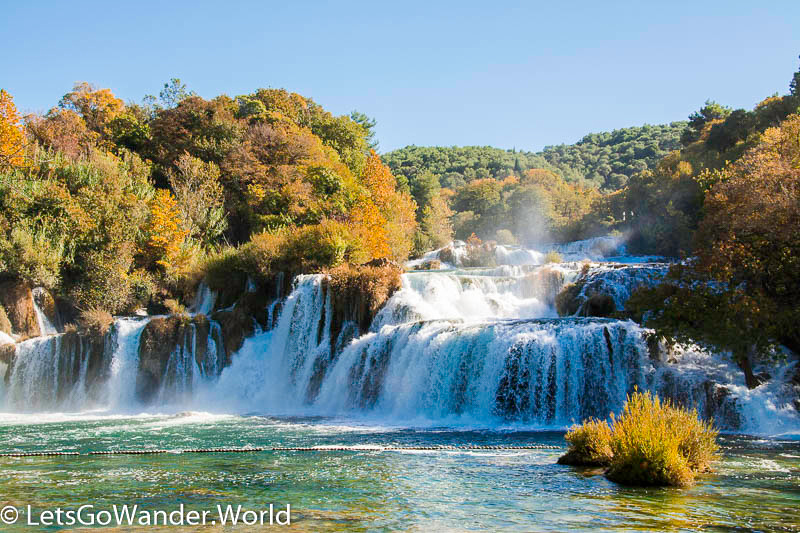 Krka National Park is named for the river of the same name which flows over a series of 7 waterfalls which make up the national park.  The most visited area of the park is called Skradinski Buk which is at the southern tip of the park and can be reached by boat or on foot – we elected to take the boat in and hike the 5 kilometers back out to the parking lot after our visit. 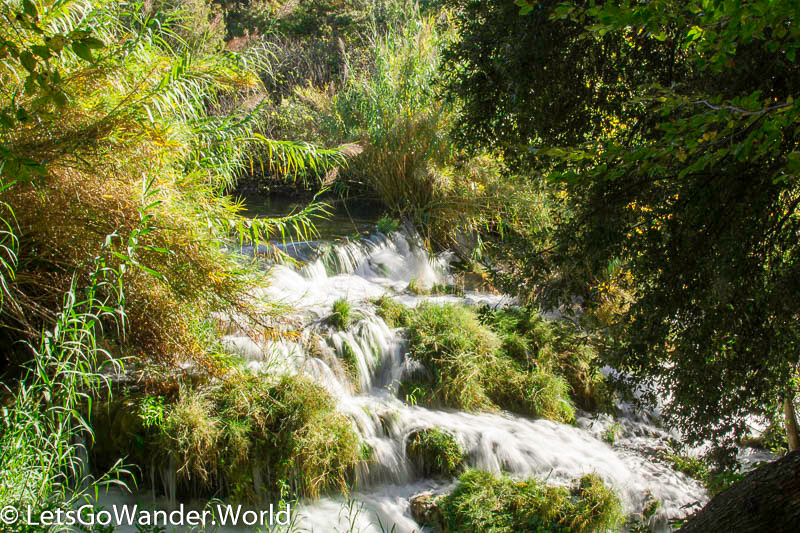 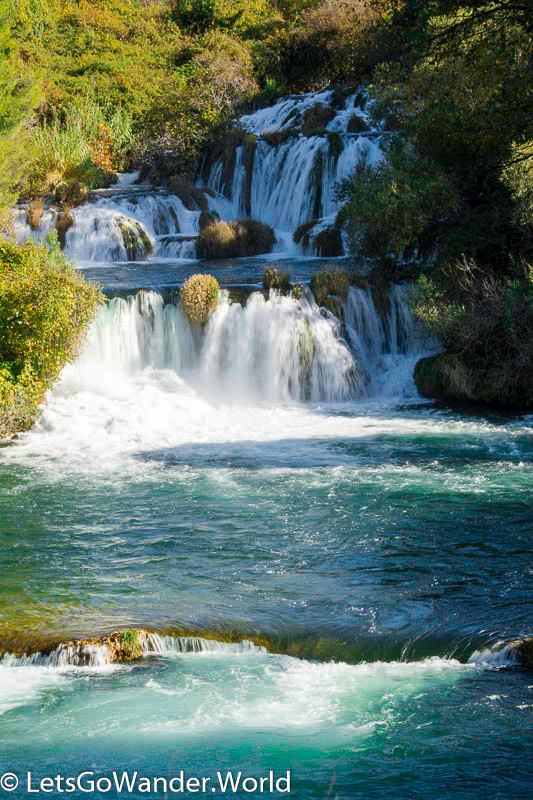 At Skradinski Buk the main attraction is a set of falls which spill into a beautiful aqua blue pool which visitors are allowed to swim in.  We elected to skip the swimming since a) I threw my swimsuit away a few weeks ago when I noticed it was kind of falling apart and b) it’s October folks!  You can also take a hike up above the main falls where there are many smaller falls and pools which are maybe not as spectacular but equally as picturesque as those below. 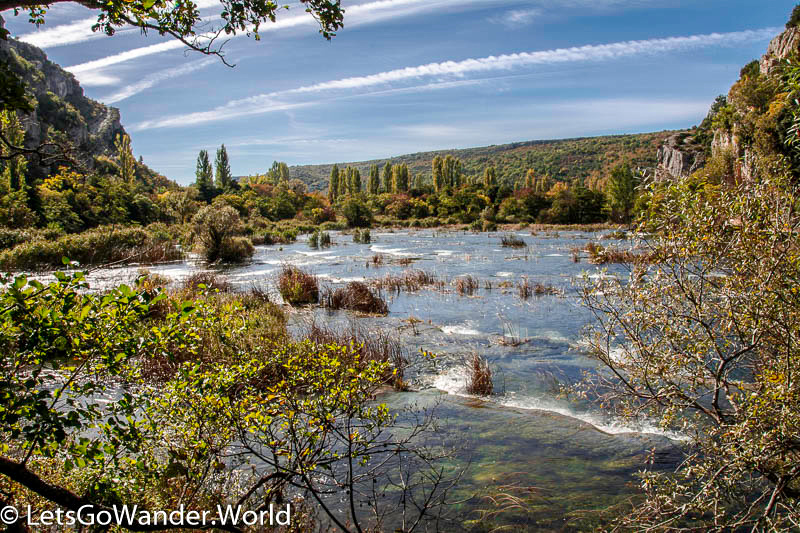 The following day, we drove to several other parts of Krka National Park.  Most of the park is accessible by boat – you hike up past falls to catch the next boat up the river – but in October the schedules are more limited so we elected to drive instead.   First, we visited Visovac island which is located in a wider part of the river and houses a 15th-century Franciscan Monastery.  A museum in the monastery has an impressive collection of relics such as historical church clothing, religious artifacts and rare books including a copy of Aesop’s Fables printed in 1487.  We arrived shortly after the park opened at 9 am and were lucky to be the only ones on the island at the time. 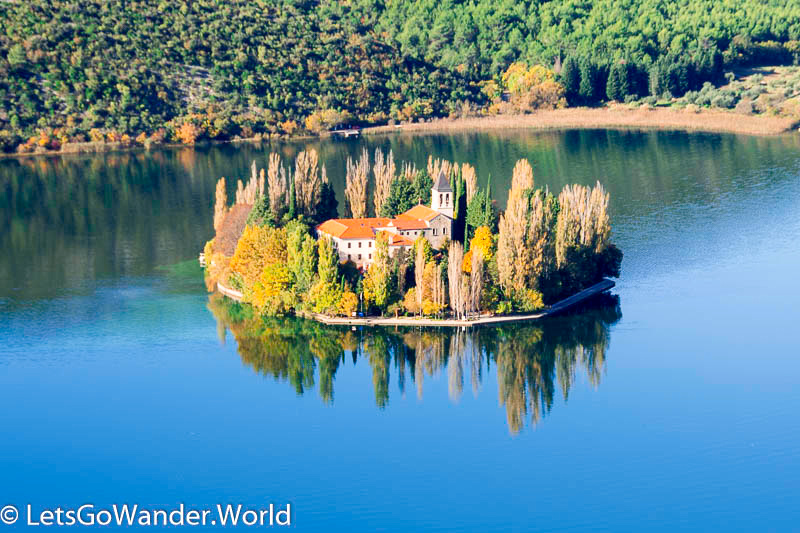 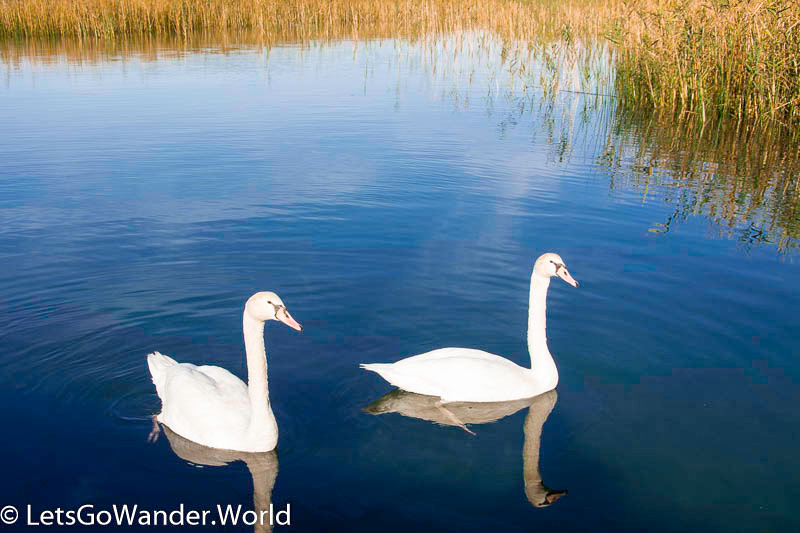 Swans on the Krka River

Next, we drove farther north to the next set of waterfalls known as Roski Slap and then finished up our tour with a stop at an overlook that provided an excellent view of the third and tallest of the seven falls – Manojlovac Slap.  Ironically, the landscape surrounding Krka National Park is not the most appealing in terms of its natural beauty.  It is generally quite flat, scrubby and rocky.  But then this gorge opens up to reveal the most extraordinary splendor. 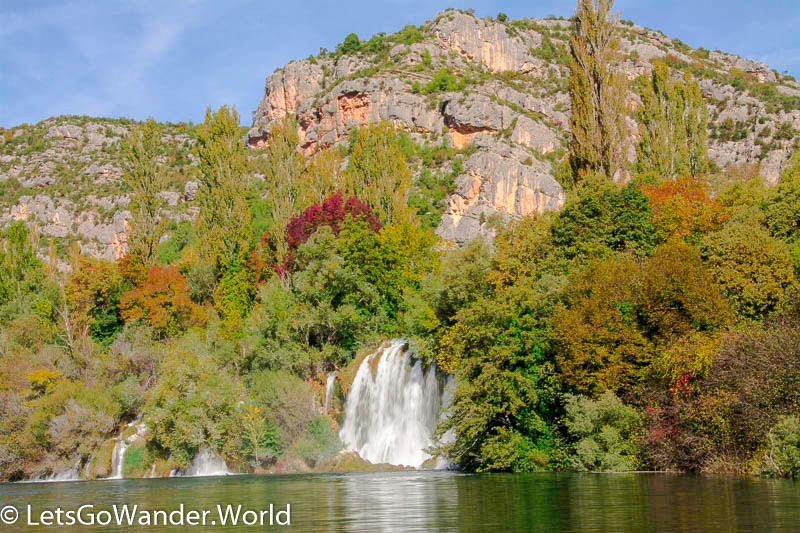 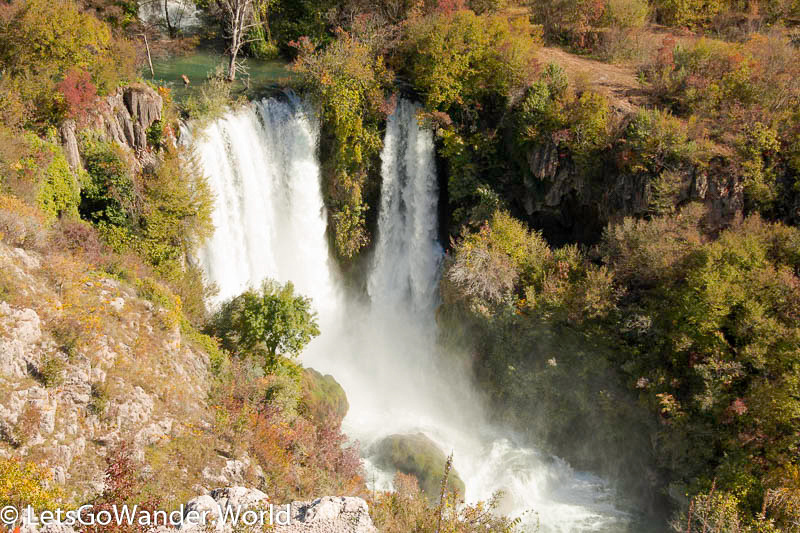 Plitvice, on the other hand, is located in a beautiful mountainous area of the country near the border with Bosnia Herzegovina.  Our visit in mid-October yielded beautiful fall colors but less than beautiful weather.  We drove up to Plitvice the day before our visit in the pouring rain which didn’t quit all day.  We rented a tiny little cabin on a beautiful piece of property surrounded by rolling green hills and blazing autumn colors.  I would say that we arrived when the fall colors were just past peak, but still incredibly beautiful.  I tried to research ahead of time what the timing for peak fall color was but couldn’t find anything too helpful on Google – based on our visit I would say that the peak is right around the very middle of October. 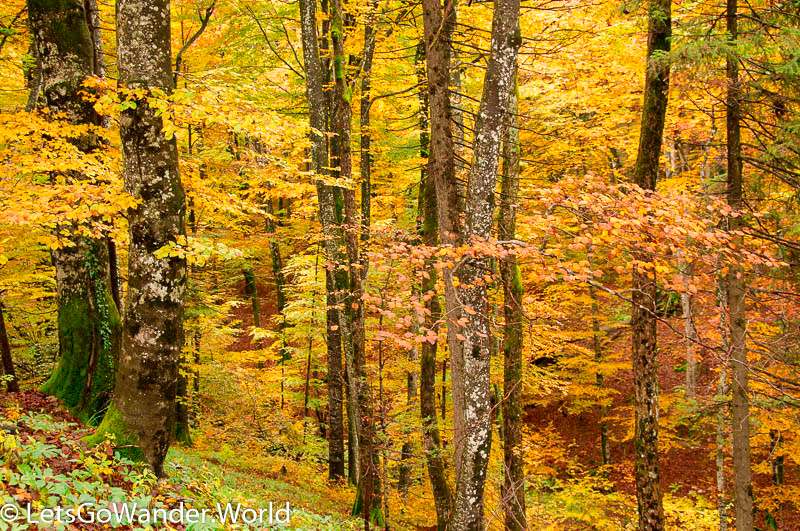 There are two entrances to Plitvice NP with catchy names – Entrance 1 and Entrance 2.  Entrance 1 is the furthest to the north and offers a stunning introduction to the park with panoramic views of the tallest falls in the park.  When we arrived shortly after the park opened, we couldn’t actually see these views because everything was shrouded in fog, but I took this picture at the end of our visit when the fog had cleared. 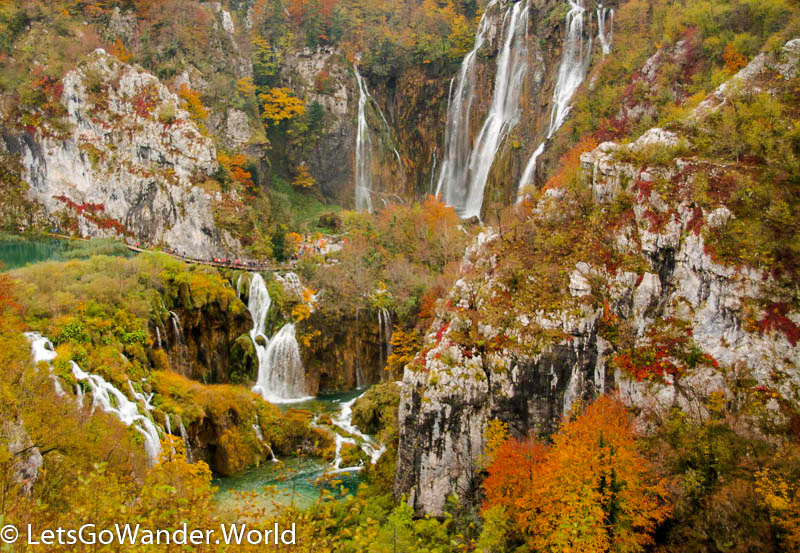 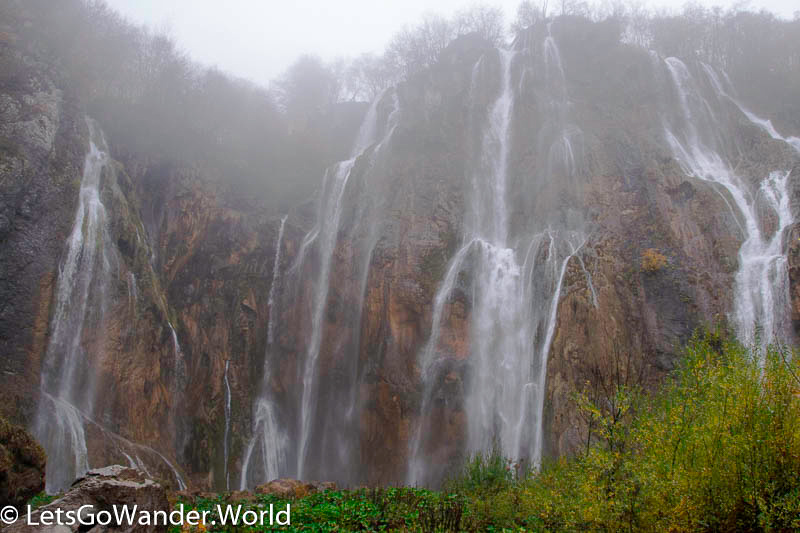 The tallest falls at Plitvice NP shrouded in fog

The park features miles of trails and boardwalks which guide visitors up close to pools and waterfalls which would otherwise be inaccessible. 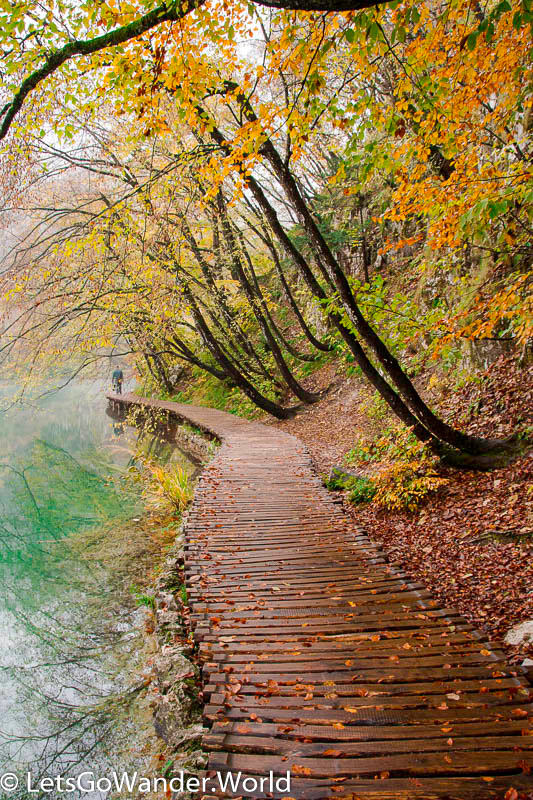 Boardwalk path along a pool 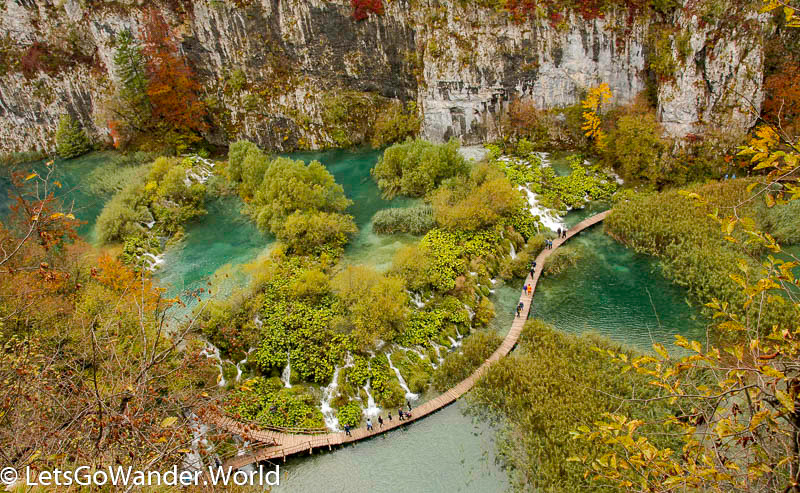 Visitors walk along one of the boardwalks toward the falls

Also, visitors have the option to take electric boats across a couple of the lakes or to take a “train” (more like a cross between a train and a bus) from the top to the bottom of the park or vice versa.  The result is that a large portion of the park can be visited in just 2-3 hours if one is short on time, however I would recommend taking the better part of a day (at least) and hiking some or all of the trails.  We elected to hike from the bottom of the park to the very top and skip the boat rides.  This was about a 9-mile hike and then we took the train back down to where we started. 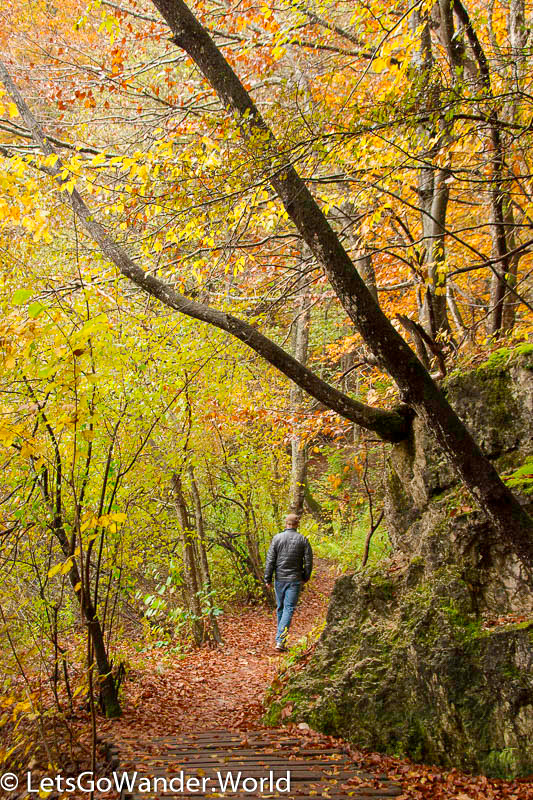 A hike in the forest 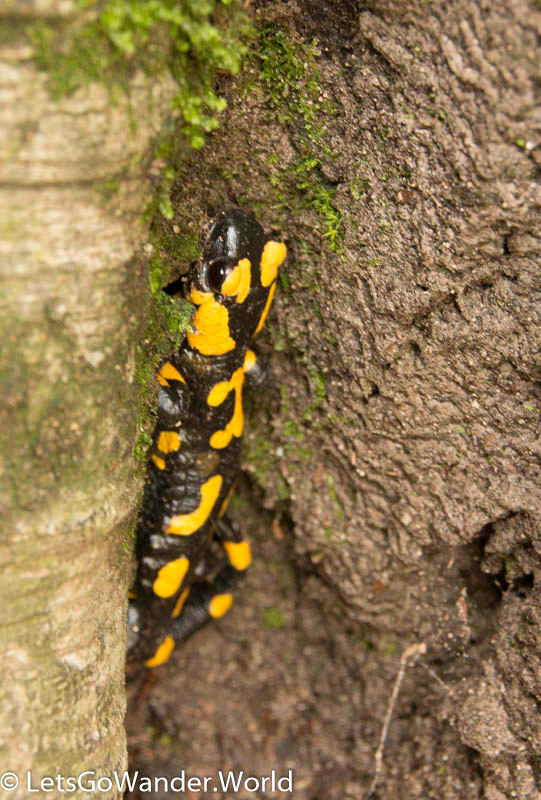 Colorful salamander hiding out near the base of a tree

Plitvice is one of those places where there is so much beauty that it overwhelms the senses.  Everywhere you turn is another spectacular scene.  It doesn’t take long to run out of superlatives to describe the place. 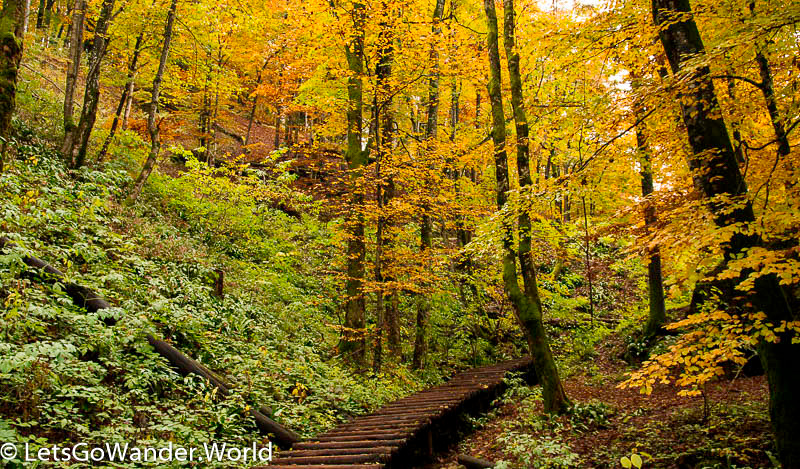 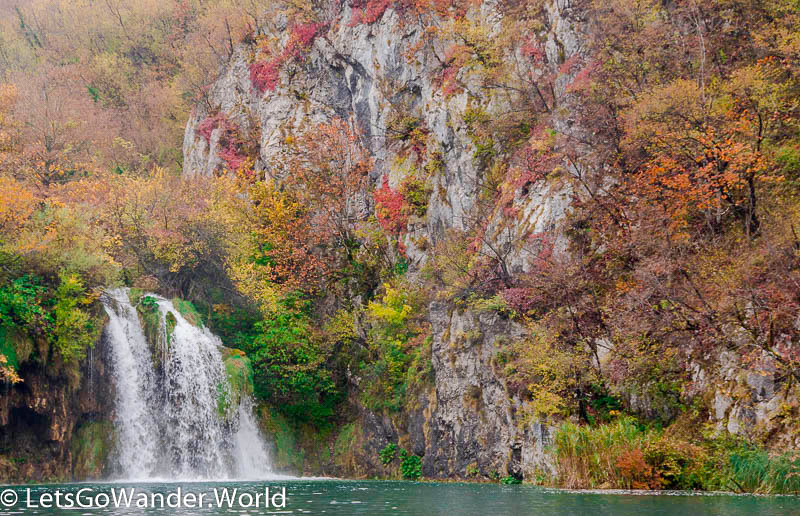 These two parks made for a great finale to our trip and afterwards we made our way back to Zagreb and then caught a (very long) train back to Frankfurt.  Tomorrow we head back home to spend some time with friends and family for the holidays.

John R.(non-registered)
These are spectacular photos! I had no idea that Croatia was so beautiful - it's on my bucket list for sure now!
No comments posted.
Loading...