Riding Along the Coast in Croatia

Well folks, we have now reached the end of the cycling portion of this trip, so before I get to the pictures here is the final video in the series covering Hungary (after Budapest), Serbia and Croatia.  Enjoy!

We arrived in Split yesterday after cycling through the Istrian peninsula, then continuing along the islands of Cres and Losinj, and finally taking a ferry to the mainland and cycling along the coast from Zadar to Split. 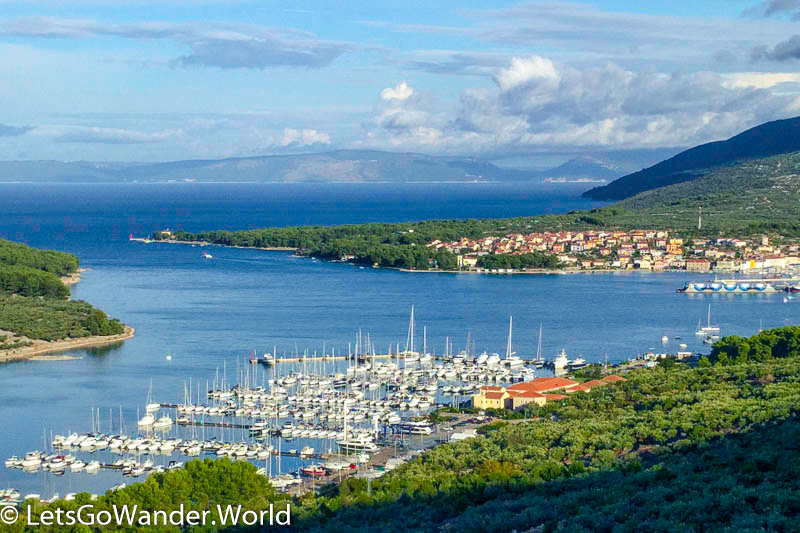 We have decided to head home at the end of October and spend the holidays with family and friends, so we still have about a month more to go.  From Split, we will continue by ferry to Dubrovnik and then make our way back to Split by ferry, staying on several islands along the way.  Since many of the ferries do not allow bicycles, we decided to leave the bikes in Split and take only what we need with us.  Plus, as you might imagine, we’re kind of ready to be done riding our bikes for now. 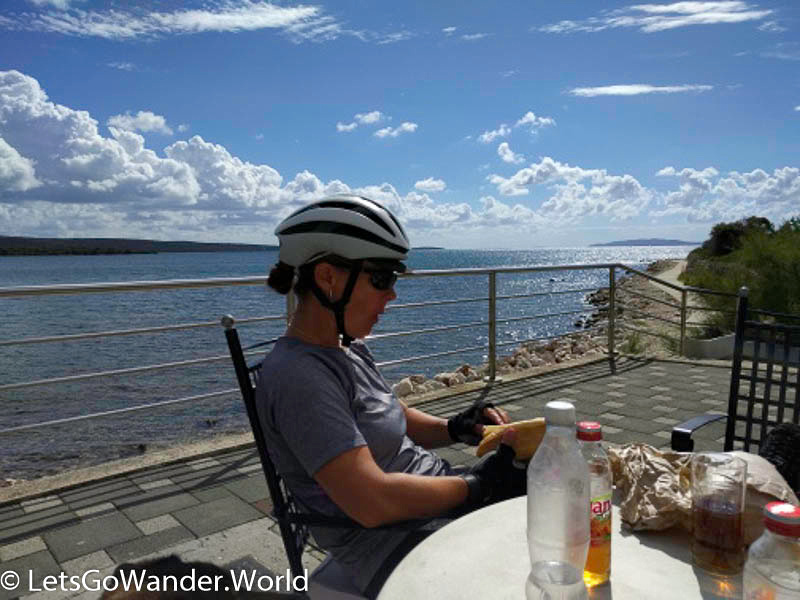 Focus on the background here – not me choking down my lunch

Although we have seen several bicycle tourists in Croatia – certainly more than we saw in Serbia – in my opinion Croatia is a fantastic place to travel but not by bike.  The landscape is beautiful, the riding is challenging enough to keep things interesting, but the traffic is ever-present.  The main problem is that there are not many tertiary roads with light traffic to ride on in Croatia. 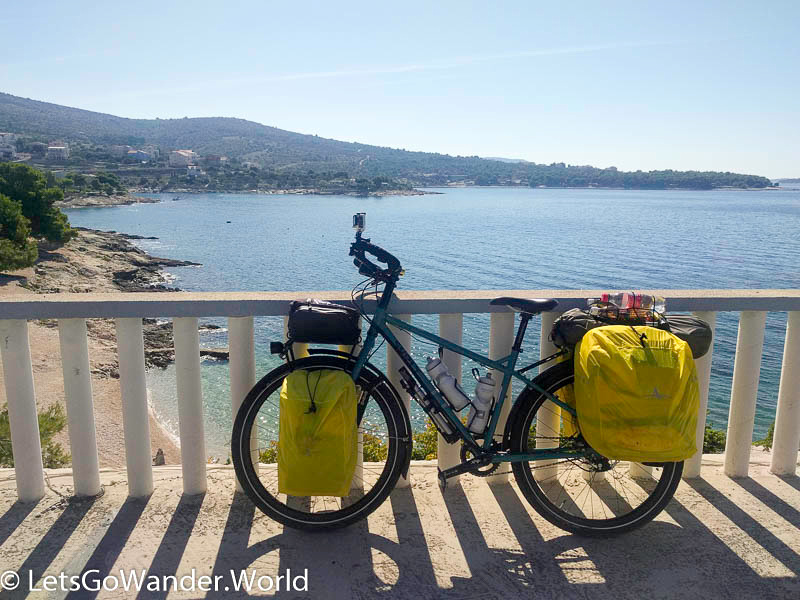 Rest stop at a nice overlook

There are the expressways, which we obviously can’t and wouldn’t ride on.  Then, there are the secondary highways, which presumably used to be the main highways before the expressways were built.  These are generally two-lane roads with no shoulders, and they have a lot of local and tourist traffic.  Certainly the traffic is much lighter now than in July and August, but September still sees plenty of tourists in Croatia.  In those rare instances where there are tertiary routes to take, they can have ridiculously steep hills (10-20% gradients). 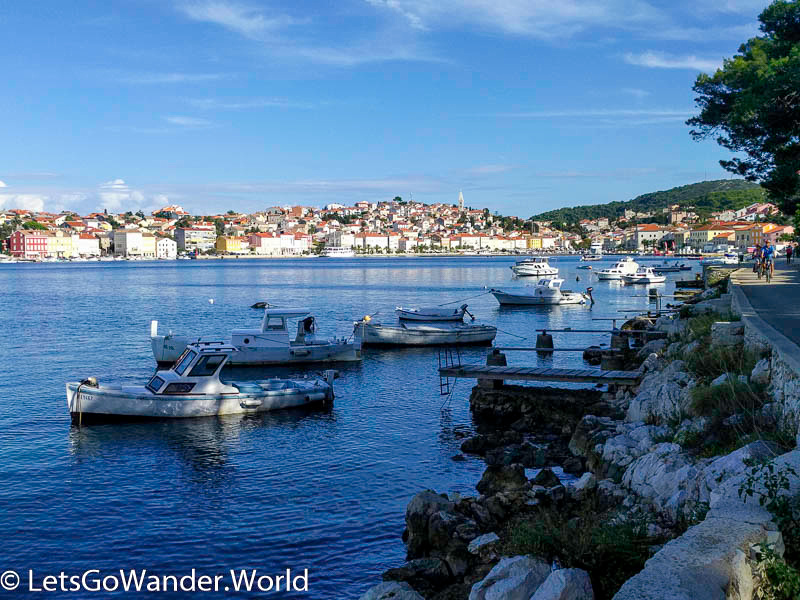 A view of the quaint harbor town of Mali Losinj

One of the things that I like about Croatia the most is that the tourist infrastructure is largely homegrown.  Outside of the capital city and the most touristy areas, you don’t see that many hotels and those that do exist are mostly small boutique hotels.  Most of the accommodations are provided by locals who rent out rooms or apartments in their homes.  In fact, we have only stayed in 2 hotels since arriving in Croatia a month ago.  Although you do see the occasional McDonalds in the larger cities, there are relatively few international chains with a presence in Croatia.  I think it’s pretty refreshing. 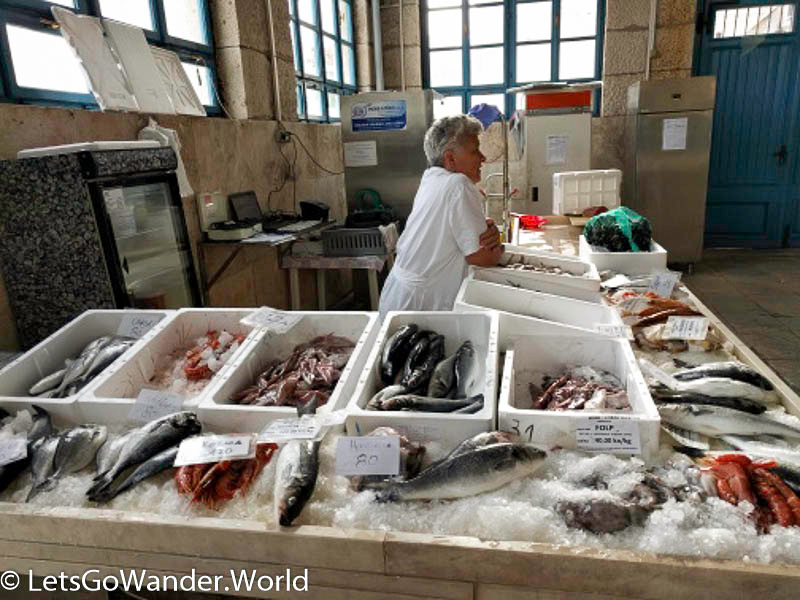 We have had the opportunity to meet many locals in Croatia – many have expressed a very keen interest in our cycling travels and sometimes they want to take a picture of us or with us.  In this small way, they become part of our story and we become part of theirs.  In a small coastal town called Pakostane, our host was just delighted when we pulled up on our bicycles with Cisco in tow.  He peppered us with questions while we unloaded our bicycles. 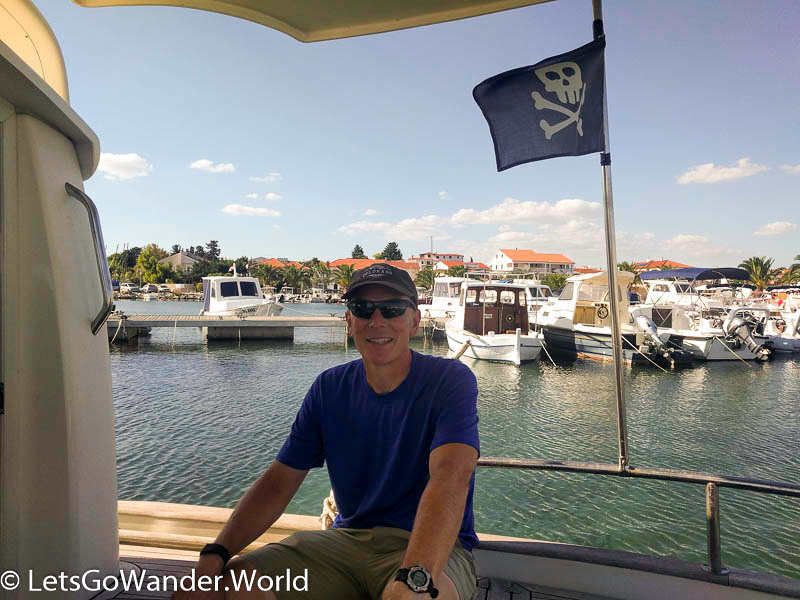 Then the next day we were sitting on the deck and he came by and asked if we wanted to go on a boat ride to a neighboring island.  He and his wife own a home on an island that they rent out and he needed to make a trip out there.  We had a great time.  As we were preparing to leave the next morning, he offered us a bottle of local wine as a gift. 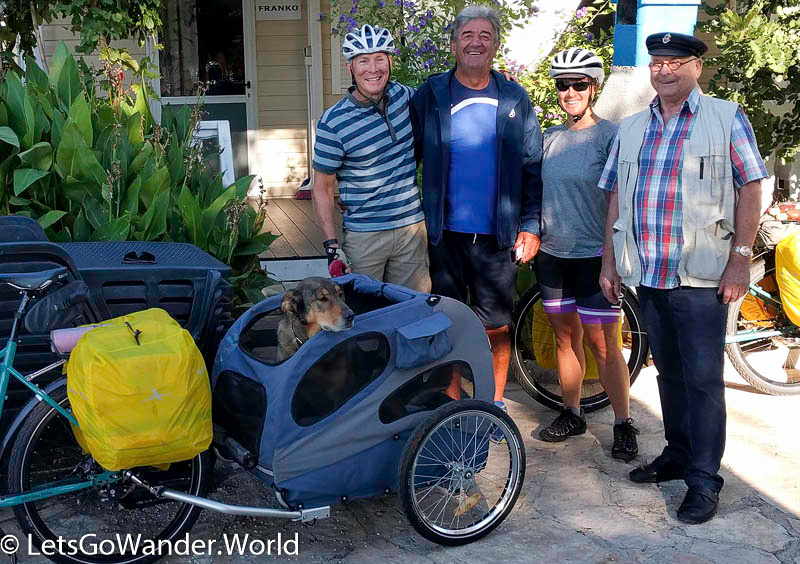 A quick picture with our host before departing

At our next stop in Brodarica, our host Vladimir also wanted to know all about our trip.  He was exceptionally well versed about the United States – he was familiar with our electoral system and wanted to know our thoughts on the current election cycle (oh so many thoughts...) and shared his opinion that "Donald Trump seems a little crazy, no?".  As we were about to load up the bikes on the morning of our departure, we discovered that Barry had a flat tire.  After helping us get the flat fixed, he invited us to have coffee before heading out.  Initially I demurred as I didn’t want to put them out any further, but it became clear to me that it would be rude to not accept his offer. 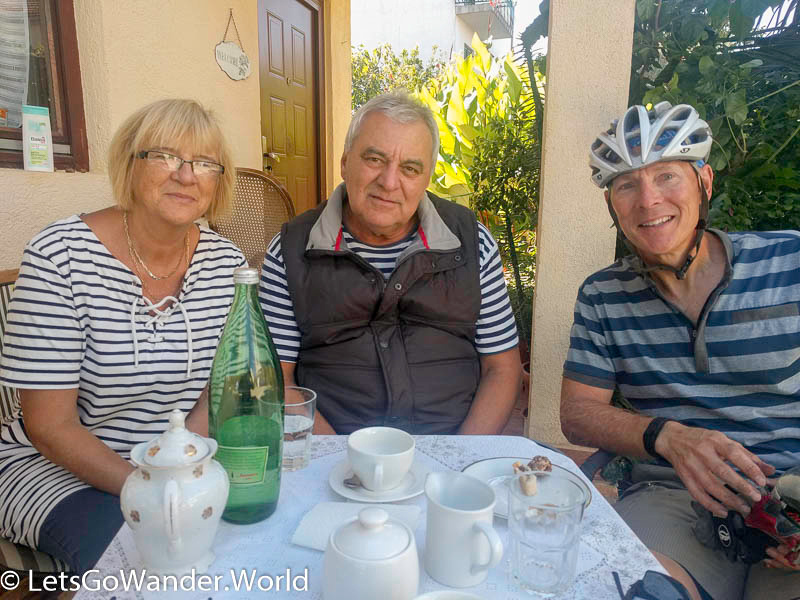 Coffee with Vladimir and Anna

Of course, in Croatia “having some coffee” is not just a matter of filling up a cup of coffee and drinking it.  He brought out a small table and chairs, covered it with a lace table cloth and his wife Anna brought out the tea cups and saucers, coffee, milk and sugar.  Then she brought out a plate of homemade cookies and biscuits.  We sat and chatted for a while and eventually discovered that Anna was from a town very near where my great grandparents were from prior to emigrating to the United States.

Another amazing thing about Croatia is the beautiful coastline.  The ocean water here is unbelievably clear – I’ve never seen anything like it.  Croatia boasts rocky coasts lined with fragrant pine trees that sway in the breeze and ocean waters varying from aqua to deep blue.  It’s quite beautiful. 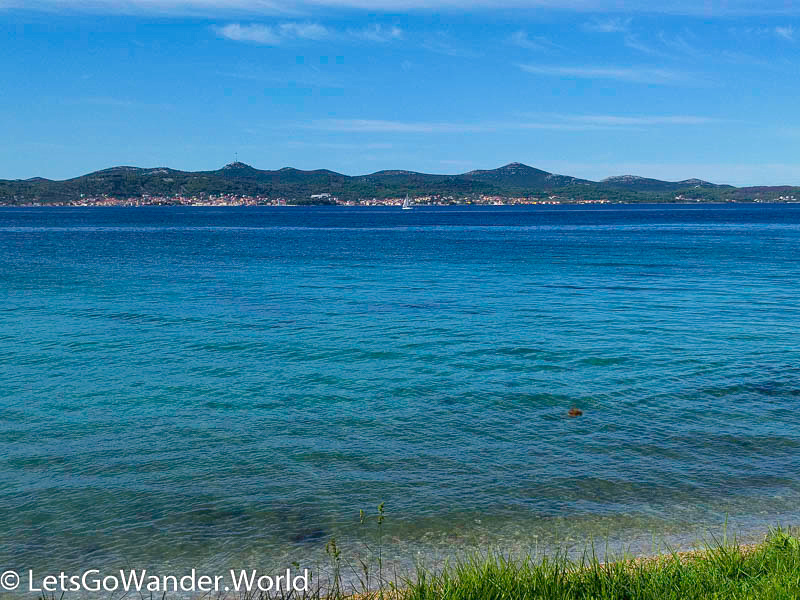 One of our favorite cities so far was Zadar.  We had zero expectations about it beforehand – the only reason we stayed near there was because it is a major ferry port.  When we took the ferry from Mali Losinj to Zadar, we arrived at about 10:45 pm. 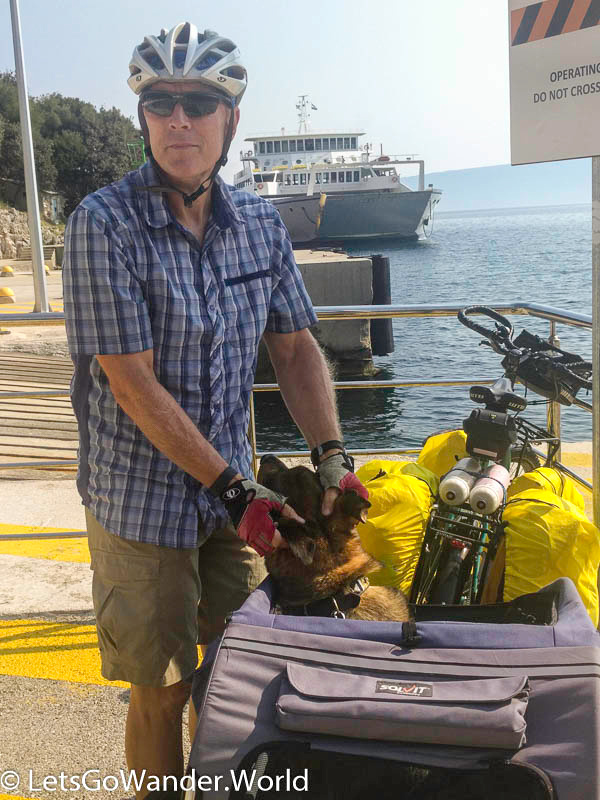 Barry and Cisco waiting for the ferry

We chose lodging close to the ferry port and I notified our hosts that we would be arriving quite late (which they were very gracious about).  This was the only time on our bike trip that we cycled in the dark and I was happy that it was only about a mile and a half on roads with very little traffic.  Our lighting systems on our bikes came in very handy on this occasion. 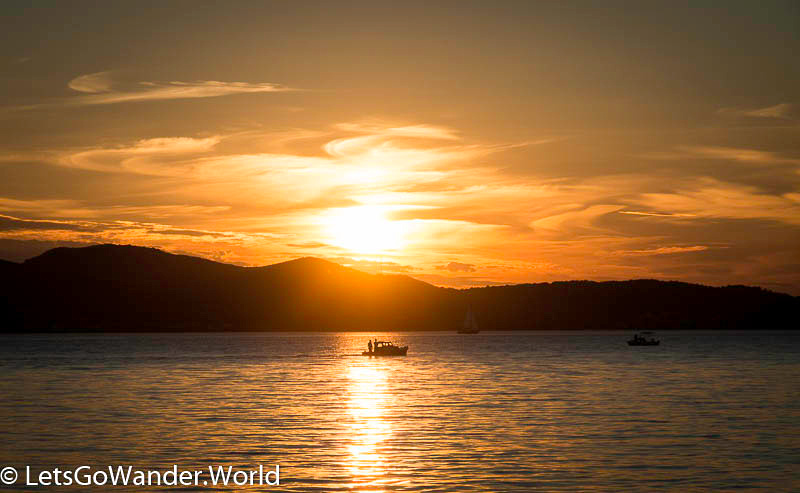 The next day, we walked into Zadar (there was a nice walking path along the coast all the way into town) and did a little exploring.  The city has a beautiful harbor, a few Roman ruins, and also a lovely old town.  Walking along the sea wall in town, we heard something that sounded like music emanating from the ocean and realized that this was the “sea organ” that we had read about.  It was designed by an architect to play music by way of sea waves and tubes that are located underneath a set of large marble steps.  Very cool. 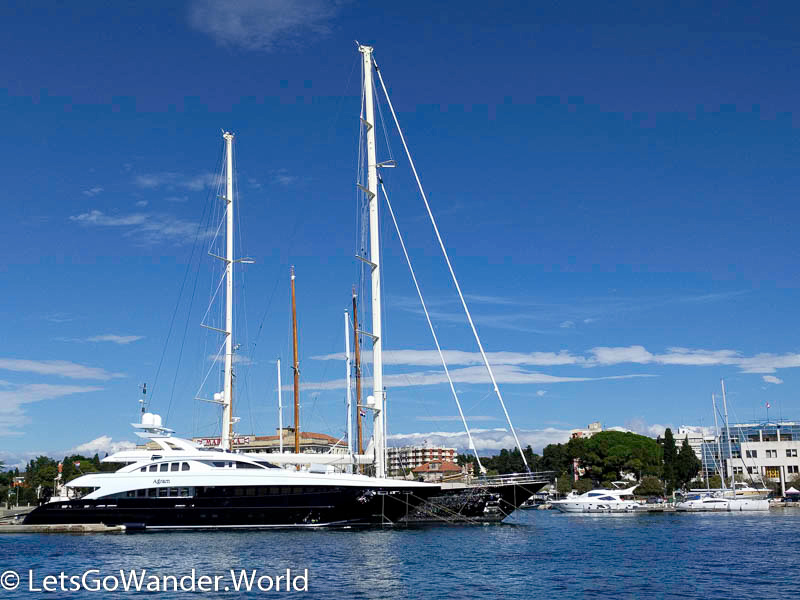 Some big yachts at the Zadar harbor

The weather so far in Croatia has been beautiful.  The first part of September was still pretty hot, but then after a couple of rainy days the temperatures have moderated somewhat so that the days are in the mid-70s and the nights drop down into the 50s.  Once we are done with our little island tour, we will pack up our bikes and all of our gear into a little cargo van and visit a couple of the National Parks before heading back to Zagreb.  From Zagreb, we plan to take a train back to Frankfurt in order to fly home from there.