Once we arrived by bicycle to Split, we spent a few days finding somewhere to store the bicycles while we traveled by ferry to Dubrovnik and several islands (there are purportedly more than 1200 islands off the coast of Croatia). 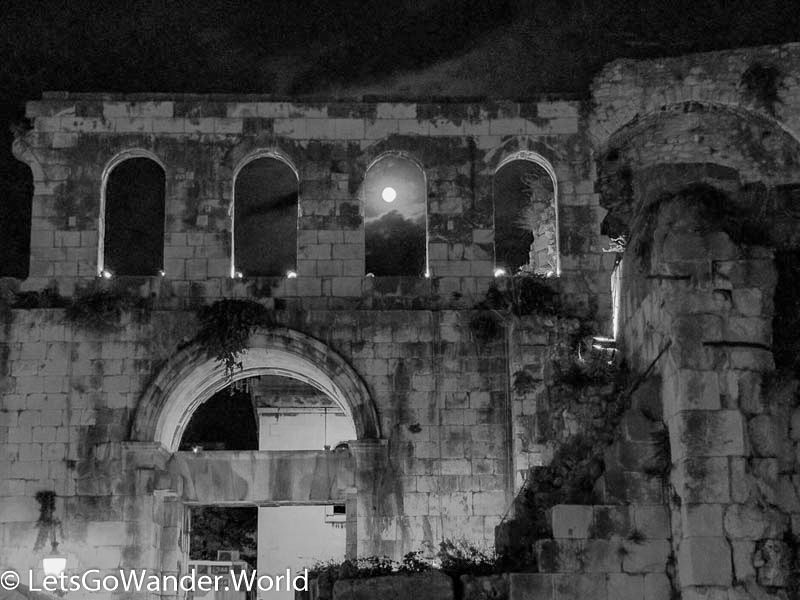 We are taking the high-speed catamaran ferries which don’t (officially) allow bicycles but do allow dogs.  The only caveat is that we have to forgo the comfy indoor seats and sit outside with Cisco.

We took a high speed catamaran ferry from Split to Dubrovnik where we stayed in a private apartment for 4 days.  Dubrovnik is an ancient town with a long and colorful history situated in a stunning location on the coast. 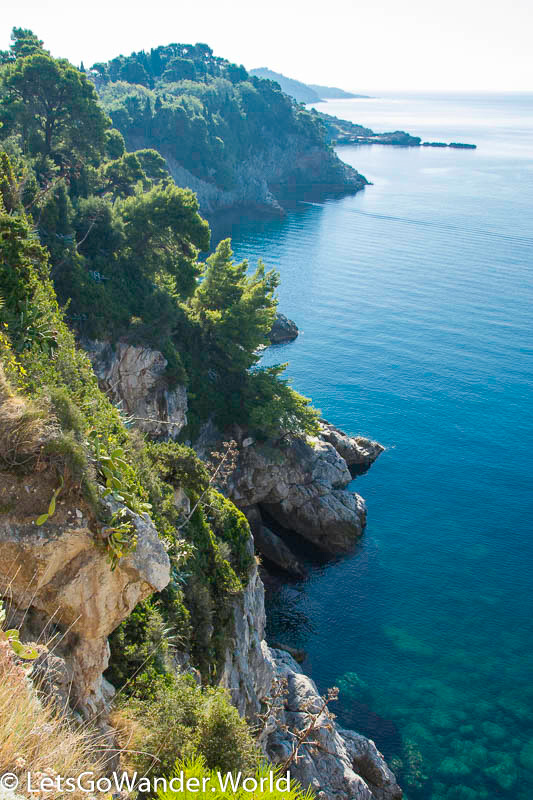 The coastline around Dubrovnik is stunning.

The walled old town has been designated a UNESCO world heritage site and has been well preserved and restored.  Unfortunately, the UNESCO designation brings with it hoards of tourists – I can only imagine how busy it must be during the high season. 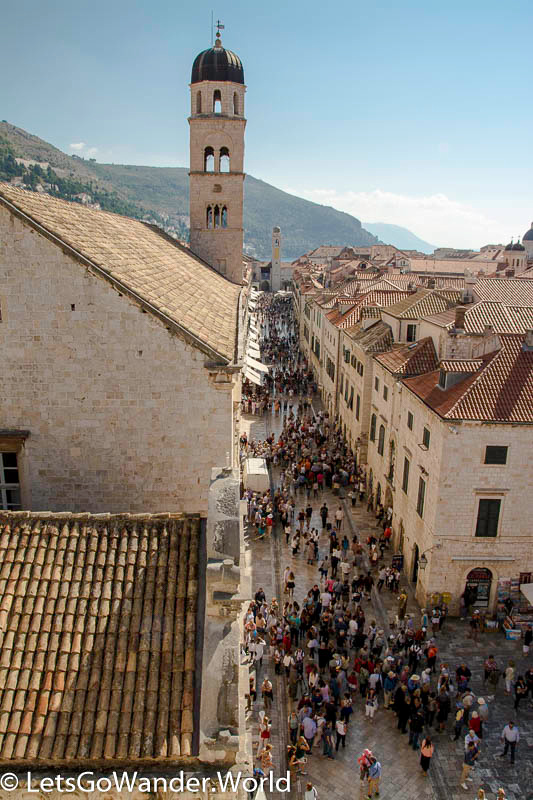 You can walk on top of the city walls all around the city which is a great way to see both the city and the views.  Some famous scenes from the Game of Thrones were filmed in Dubrovnik.  Click here to see a write up - it's pretty interesting to see. 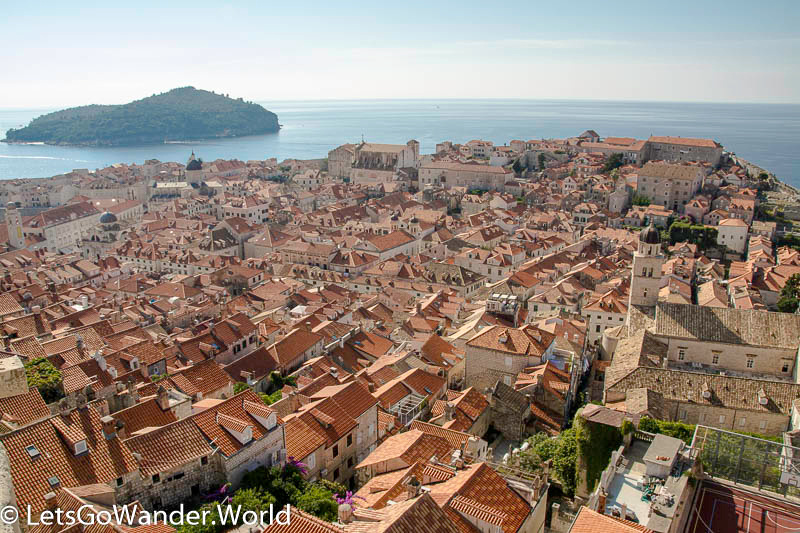 View of old town Dubrovnik from atop the city walls.

We took a ferry to the island of Lokrum which is visible just off the coast of Dubrovnik.  This island is uninhabited but has hiking trails, an old monastery and a fortress located at the highest point. 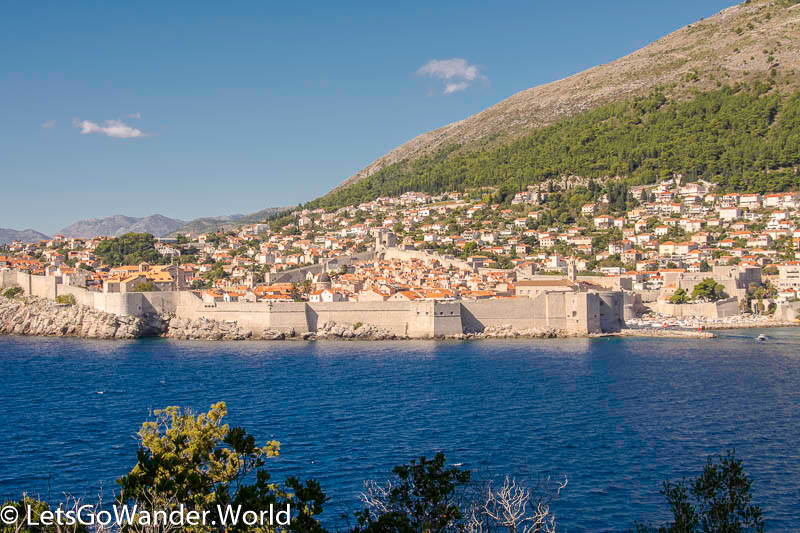 View of the Dubrovnik city walls from Lokrum.

We also took a day trip into Montenegro to see the town of Kotor which has also been designated a UNESCO site.  Kotor is located on a huge bay that was historically highly strategic because of the narrow opening that was easily guarded against enemy ships. 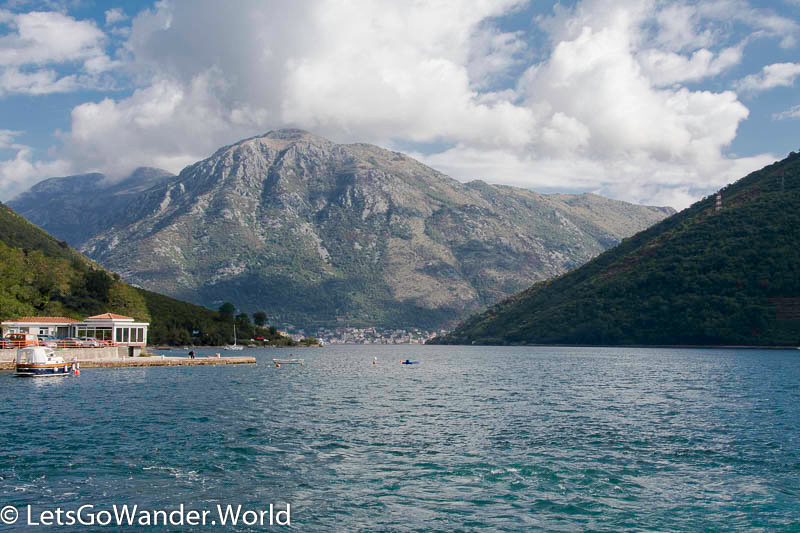 Montenegro is extremely mountainous, with the mountains coming right up to the ocean.  Kotor is located at the base of a mountain with the old town walls built up the mountain side.  The weather wasn’t great when we were there, but the location was still stunning. 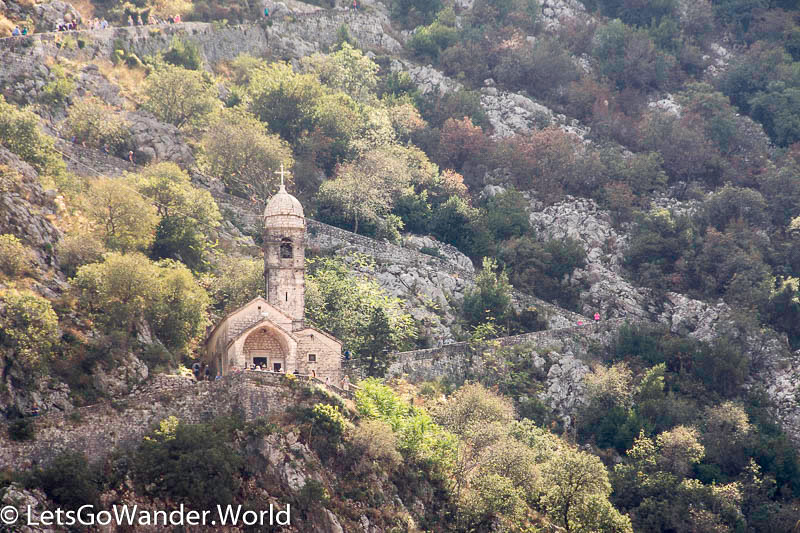 Church of Our Lady of Remedy located above Kotor 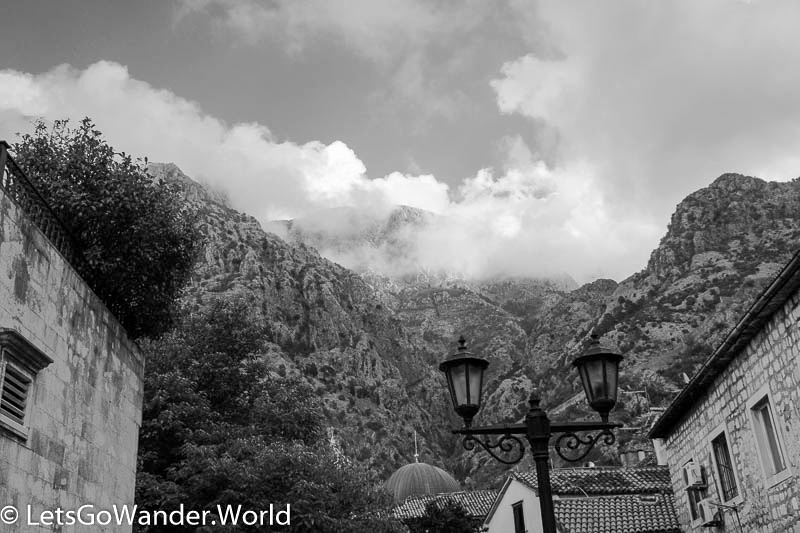 Looking up towards the mountains from old town Kotor.

Our next stop was the island of Korcula where we stayed in the town of the same name.  Korcula (the town) is a ridiculously cute walled medieval town that has been well-preserved over the years. 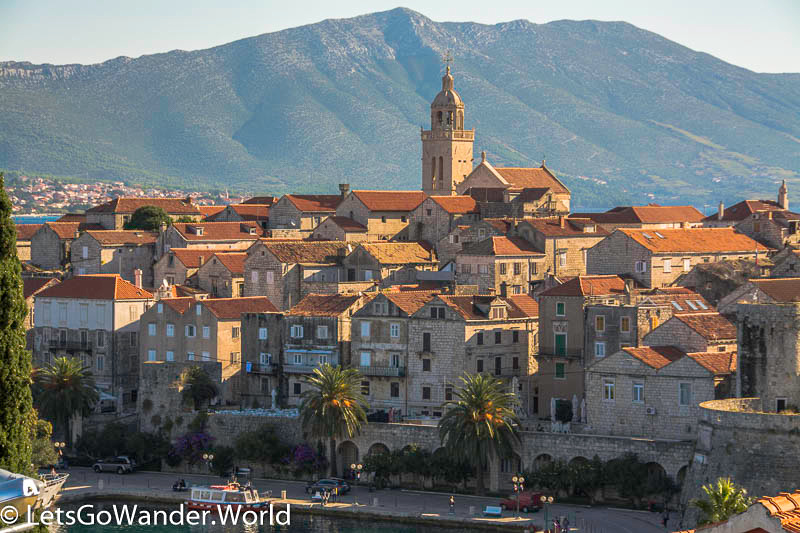 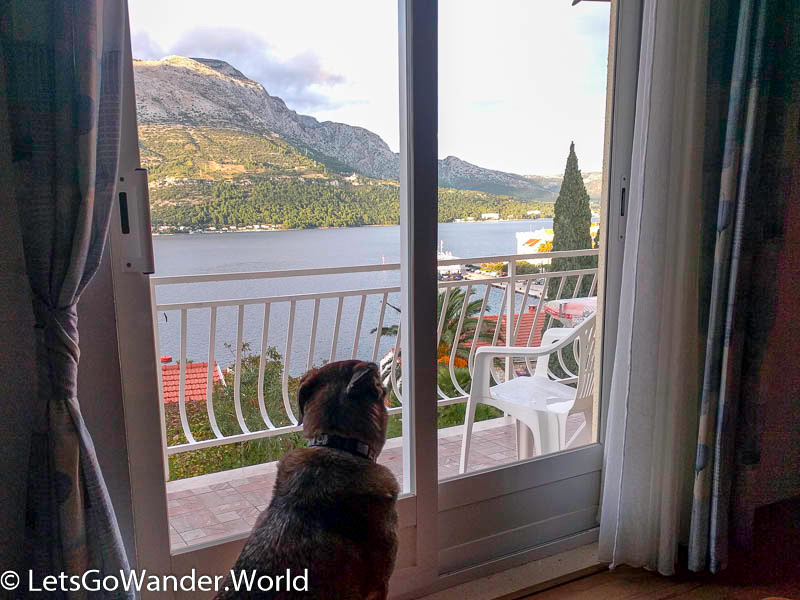 Cisco enjoying the views from our apartment on Korcula

The town has a church and a small public square at its center with a series of small stone corridors leading outwards.  Everywhere you turn is a little restaurant or a café with tables placed along the stone corridors. 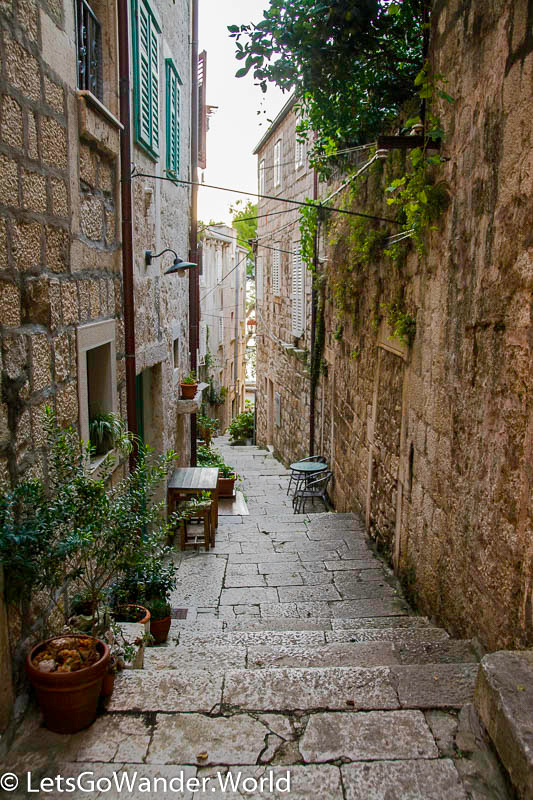 One of many narrow “streets” in old town Korcula 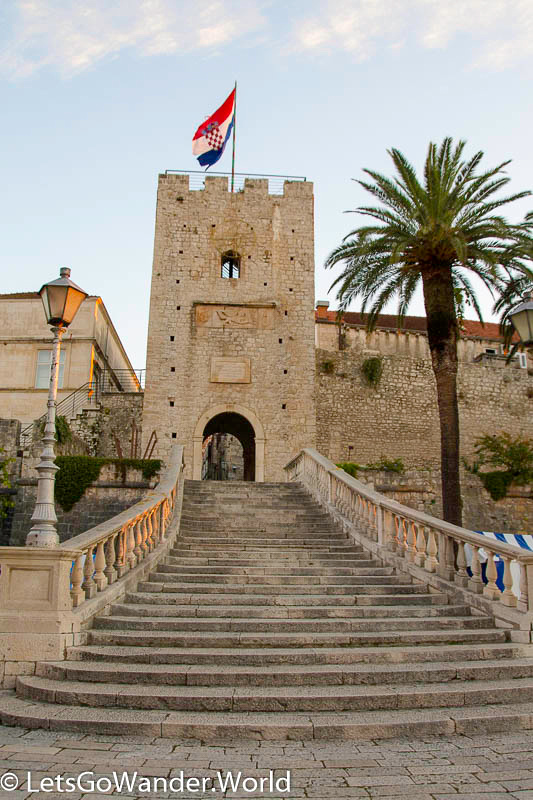 Part of the original wall that surrounded Korcula

The next stop on our island-hopping tour was the island of Hvar where we stayed in the town of Hvar, again in a private apartment.  Our host was kind enough to pick us up near the ferry port and let us pick up some groceries at the market before heading to the apartment as the rain picked up. 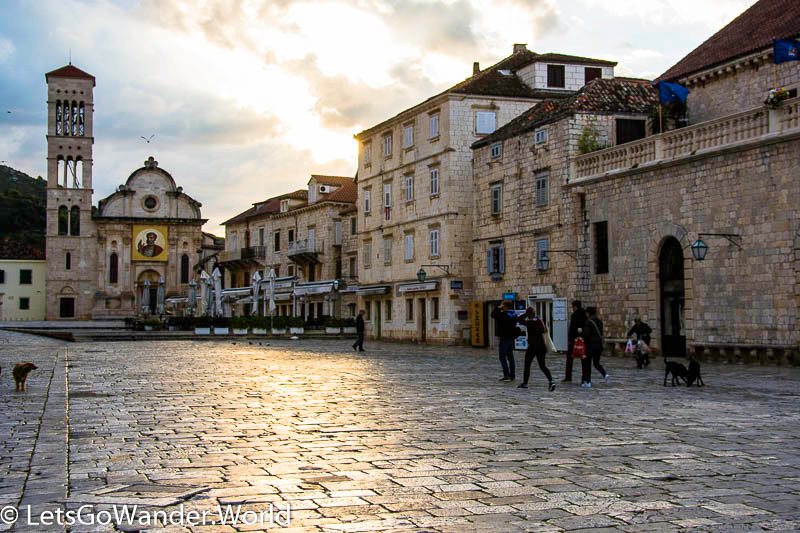 The main square in Hvar town.

The weather forecast was a bit iffy for Hvar, but it ended up being very nice during our stay, with only occasional bouts of rain.  Hvar has long paths extending from the port along the coast which was a great place for a long walk with Cisco each day.  The port of Hvar is quite popular with the yachting set with lots of sailing and power yachts parked at the port or moored nearby. 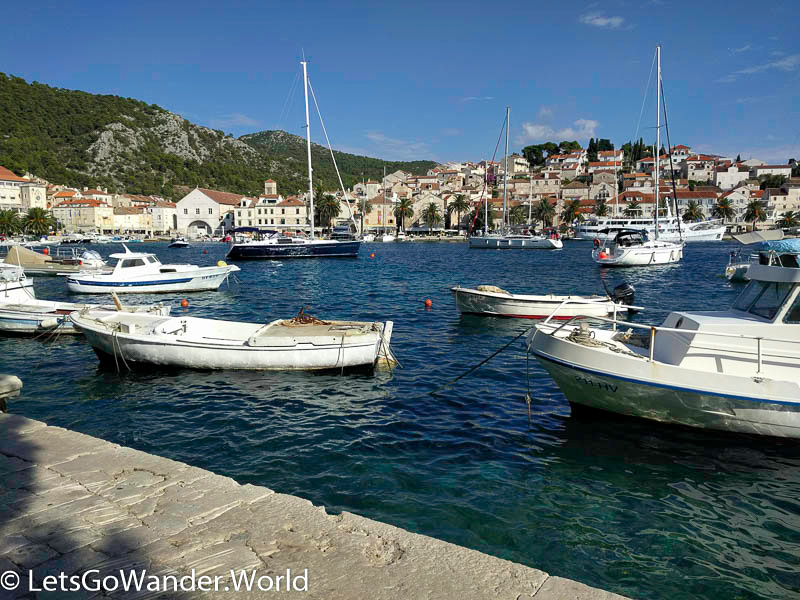 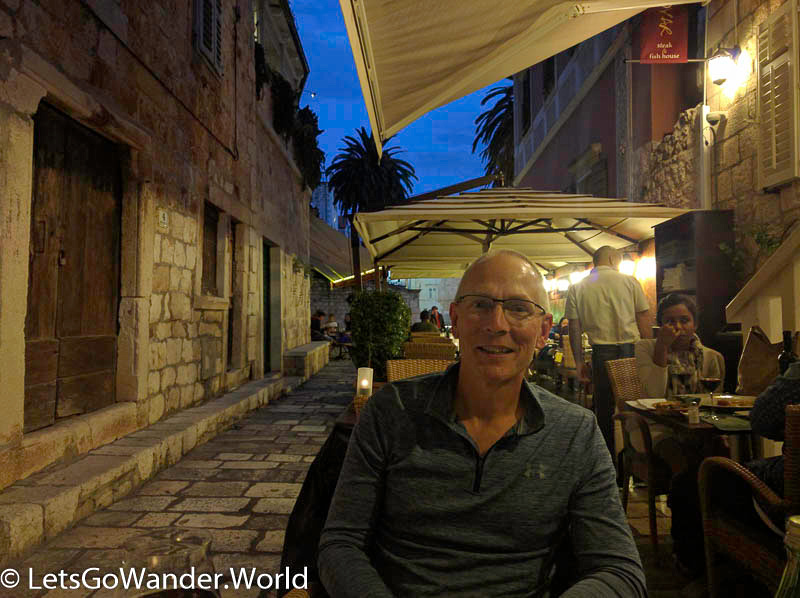 Dinner at an outdoor café in Hvar.

Hvar is also an old walled city built on a hillside with a fortress located at the top.  You can climb up the hill to see the views from the top and tour the old fortress which has an old underground cave-like prison and lookout towers with old canons dating from the late 1800s. 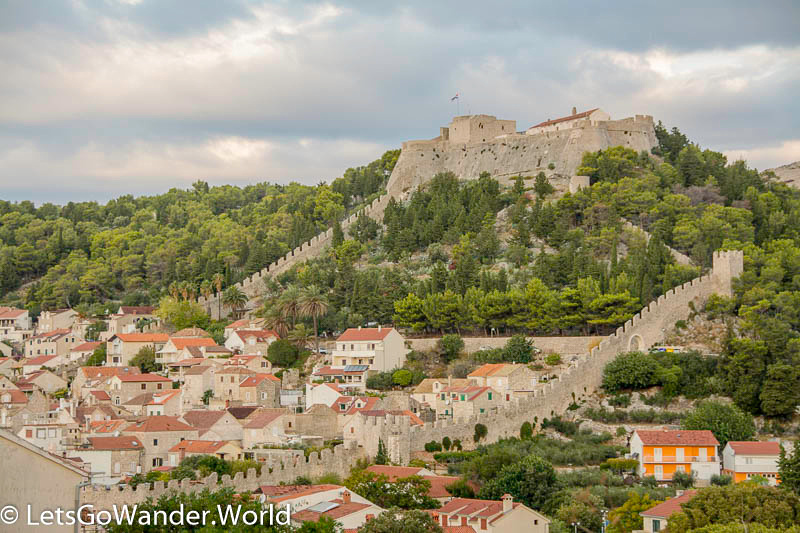 Old walls of Hvar town with the fortress at the top

Our final island visit was to Vis which is a small island with a population of only 3000.  The island used to be largely off-limits to civilians during the post WWII era when the military built a network of tunnels to be used for combat purposes and for protection against nuclear attacks.  When Croatia gained independence from Serbia, the local inhabitants of Vis discovered these tunnels and today they offer jeep tours to these abandoned tunnels. 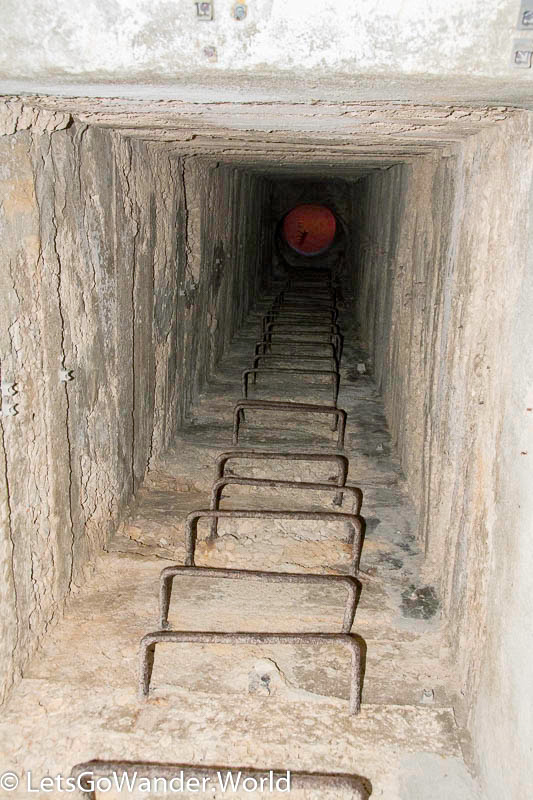 Escape hatch from the tunnels. 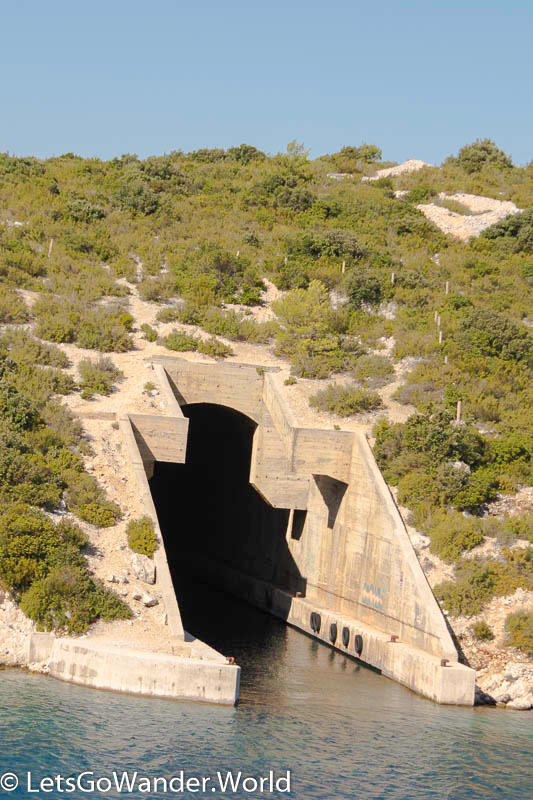 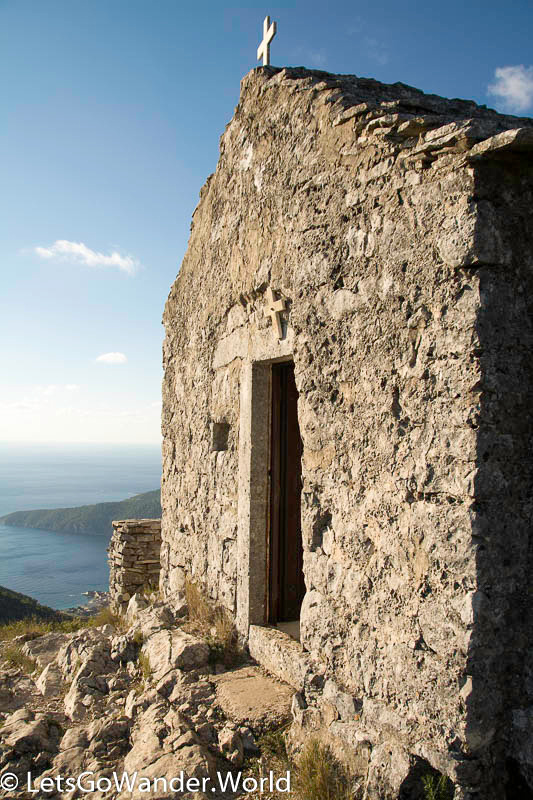 After our visit to Vis, we made our way back to Split by ferry to arrange the remaining two weeks left in our trip.  After collecting our bikes from their storage location, we’re planning to rent a small van which will hold our bikes and luggage and head off to the Krka National Park and then to the Plitvice lake region (another UNESCO heritage site) which promises to be very beautiful.